‘Aromella’ is a winter-hardy white wine grape with high potential productivity and aromatic/muscat wine characteristics. Vines are large in size and more winter-hardy than most French–American hybrid grapes. ‘Aromella’ is more disease-resistant than are cultivars of Vitis vinifera and requires a disease control program typical of what is used on many French–American hybrid grapes. ‘Cayuga White’, an earlier Cornell introduction, was used as a benchmark cultivar for all viticultural and enological comparisons.

‘Aromella’ (Fig. 1) was developed at the New York State Agricultural Experiment Station, Cornell University, Geneva, NY, resulting from a 1976 cross between ‘Traminette’ (Reisch et al., 1997) and Ravat 34 (Fig. 2). This parentage is consistent with results based on eight simple sequence repeat loci from ‘Aromella’ and its proposed parents (Bautista et al., 2008). The first wine of ‘Aromella’ was made in 1983, and the original seedling vine, tested as NY76.0844.24, was propagated for further testing in 1990.

Own-rooted vines grown in phylloxera (Daktulosphaira vitifoliae Fitch) -infested soils have been large and productive with vines exhibiting a semitrailing growth habit. When grown in small-scale trials at Geneva, NY (2.74 × 2.44-m spacing), using a disease control program suitable for most hybrid grapes, cane pruning weights for ‘Aromella’ and ‘Cayuga White’ averaged 1.9 and 1.2 kg/vine, respectively, and fruit yield averaged 11.5 kg/vine (≈17.2 t·ha−1) and 11.2 kg/vine, respectively, between 1995 and 2011. Cluster weights of ‘Aromella’ and ‘Cayuga White’ averaged 122 and 204 g, whereas berries averaged 1.53 and 2.70 g, respectively. Budbreak in ‘Aromella’ usually occurs before ‘Traminette’ and after ‘Concord’. Vines are extremely sensitive to damage when green tissues are exposed to drift from 2,4-D herbicide use, and there is some tendency for fruit shelling to occur shortly after ripening as a result of cracking and abscission at the point of berry–pedicel attachment, especially in warmer regions. Therefore, delaying harvest is not advised.

Vines of ‘Aromella’ are highly winter hardy and should be suitable for most sites, even those with colder winter temperatures, within viticultural growing regions similar to the Finger Lakes of New York. Tests of midwinter primary bud hardiness indicate that 50% bud kill will occur at ≈–26.7 °C with a range of –25.3 to –27.6 °C. ‘Aromella’ is considerably hardier than ‘Cayuga White’, with which the estimated temperature of 50% primary bud kill in midwinter is –24.2 °C. Trunk damage has not been observed, and ‘Aromella’ vines remained productive even after winter lows of –26 to –27 °C. In those years, shootless nodes averaged ≈20%, whereas ‘Cayuga White’ had 69% to 78% shootless nodes.

‘Aromella’ has medium resistance to downy (Plasmopora viticola) and powdery (Erysiphe necator) mildews, and a spray program suitable for disease control with most hybrid grapes should be suitable for use with ‘Aromella’. Leaf phylloxera have been observed on the canopy of ‘Aromella’ in some years, but no control measures have been warranted. Berries are soft and remain in good condition until ripe, but Botrytis bunch rot and sour rots may cause losses if harvest is delayed, especially after rainfall. Because clusters are long and loose, rot does not spread quickly.

Own-rooted vines are large with a semitrailing growth habit. Suitability of training systems is still under study, but systems that take advantage of large vine size with high productivity potential (e.g., high wire cordon or Geneva Double Curtain) should be considered. Given its high level of winterhardiness, trunks and cordons should be long-lived.

Research wines were first produced in 1983 at Cornell’s Department of Food Science and Technology. More recently, wines have been produced from ‘Aromella’ grapes at Cornell’s Vinification and Brewing Laboratory (V&B) in single trial lots since 1996 and in multiple lots for processing parameter trials since fruit production increased in 2006. Control wines were produced following a standard procedure; in short, fruit was pressed and juice settled overnight in glass carboys, then inoculated with yeast strain EC 1118 (Lallemand, Montreal, CA). After fermentation at ambient temperature (21 °C), wines were racked into full glass carboys and cold-stabilized for 2 weeks before bottling under screw caps in standard, 750-mL bottles. If enough fruit was available, additional wines were produced varying fermentation temperature (ambient or cool), pre-fermentation skin contact time (24 to 48 h cold soak post-crush/pre-press), or yeast strain.

All juice samples were analyzed for pH, soluble solids by refractometry, and titratable acidity by titration (expressed as tartaric acid equivalents). In 2010 and years after, juice was also analyzed for yeast assimilable nitrogen (YAN) by enzymatic analysis. Wines were analyzed for pH and titratable acidity as described previously and for organic acids (tartaric, malic, lactic) by high-performance liquid chromatography. All wines were screened for sensory characteristics by trained panelists, who were asked to provide descriptors for aroma (orthonasal) and palate (retronasal odors, tastants, mouth feel, and acid/sugar balance) and to rank the wine’s pleasantness on a standard 9-point hedonic scale.

At the Geneva site, ‘Aromella’ was harvested an average of 2 weeks later than ‘Cayuga White’ but with soluble solids averaging 1.8 °Brix higher and with comparable titratable acidity (TA) and pH (Table 1). The highest reported soluble solids for ‘Aromella’ was in 2012, when one fruit lot was measured at 23.7 °Brix (data not shown), but the highest average soluble solids (21.5 °Brix) and lowest TA (9.3 g·L−1) were reported in 2010 (Table 1), a relatively warm year in the region.

Because total YAN concentration is known to vary widely by year, site, and cultivar (Butzke, 1998), it is not surprising that both ‘Aromella’ and ‘Cayuga White’ juice showed great variation. Individual concentrations of YAN in ‘Aromella’ ranged from 122 to 238 mg nitrogen (N)/L (data not shown) with means ranging from 126 to 188 mg N/L (Table 2) compared with 141 to 188 mg N/L in ‘Cayuga White’. Because the minimum YAN concentration required for yeast fermentation is reported to be 140 mg N/L (Bely et al., 1990), juice from both cultivars will need nutrient supplementation in most years. It is also interesting to note that the YAN concentration in both cultivars consists primarily of primary amino nitrogen with relatively low ammonium (AMM) concentrations. Because AMM is the preferred N source for yeast, this imbalance may impact fermentation and wine aroma development but is easily amended through the addition of diammonium phosphate (Bell and Henschke 2005). Furthermore, because both AMM and YAN vary by vineyard site, season, and viticultural treatments, YAN concentration and makeup may be quite different in ‘Aromella’ grown in other regions.

Post-fermentation, wines produced from ‘Aromella’ showed moderate to high acidity with an average 3.1 pH and 9.6 g·L−1 TA (Table 3). ‘Cayuga White’ wines had similar pH values (3.0) but higher average TA (11.0 g·L−1). These values are similar to ‘Riesling’ and other white Vitis vinifera grown in the region and have been found to produce wines with appropriate palate balance, especially if finished in an off-dry style with some residual sugar. The tartrate:malate ratio of ‘Aromella’ wines is generally lower than ‘Cayuga White’, averaging 0.8 ± 0.3 and 1.5 ± 0.7, respectively (data not shown). The high malic content is impacted by season, however, because the exceptionally warm harvest in 2010 yielded an average tartaric:malic ratio of 1.1 ± 0.3 in ‘Aromella’. Because the aromatic, off-dry styles most popular for ‘Aromella’ contraindicate malolactic fermentation, the occasionally high malate concentrations (Table 3) are not detrimental to wine sensory quality.

In sensory screening panels, wines produced from ‘Aromella’ were consistently described as aromatic, exhibiting notes of pineapple, honeysuckle, citrus peel, and floral, almost muscat-like characters. The average hedonic rating for ‘Aromella’ over 5 years (n = 20) was 5.5 ± 0.5 compared with 5.4 ± 0.4 for benchmark cultivar Cayuga White. Screening trials suggested that panelists preferred wines fermented at cooler temperatures, those fermented with aroma-enhancing yeasts, and made with up to 24 h of pre-fermentation cold-soaking at 15 °C on the skins to enhance volatile extraction. In 2012, yeast trials were performed on ‘Aromella’ wines produced from two research vineyard sites (Cornell breeding program, harvested 5 Sept., and Cornell’s NE 1020 variety trial site, harvested 24 Sept., both in Geneva, NY). Four yeast strains were selected to enhance fruit character through release of volatile thiols or ester production: Vin 13 (Anchor Yeast, Industria, South Africa) and ICV Opale (Lallemand) were used on fruit from both sites, Elixir (Lallemand) on one breeding site lot and NT 116 (Anchor Yeast) on one NE 1020 site lot. In Aug. 2013, 25 industry members and wine researchers were presented with the wines, blind, and asked to rank them for preference. Although no significant difference was found for individual yeasts, panelists generally preferred wines from the plot harvested on 24 Sept., citing riper fruit and less pronounced acids.

‘Aromella’ is recommended for commercial production of aromatic/muscat white wines. It has potential for adaptation to grape-growing regions similar to the Finger Lakes of New York with its high level of midwinter cold-hardiness and ability to ripen midseason. However, it should not be grown where 2,4-D is in use. It should be suitable for use as a varietal or for blending purposes. Vines are highly productive and very winter hardy under upstate New York conditions.

Vines of ‘Aromella’ may be purchased from licensed nurseries; contact Ms. Jessica Lyga (JML73@cornell.edu) of the Cornell Center for Technology Enterprise and Commercialization for a list of licensees or to become a licensee. You may also access a list of sources at <http://www.cctec.cornell.edu/plants/index.php>. Virus-tested cuttings may be obtained from Foundation Plant Services, University of California, One Shields Avenue, Davis, CA 95616-8600 (phone: 530-752-3590; e-mail fps@ucdavis.edu; Internet: <http://fps.ucdavis.edu/>).

Fruit clusters of the ‘Aromella’ grape.

Pedigree of the ‘Aromella’ grape. 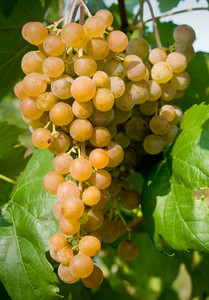