‘Cascade Gold’ is a new gold-fruited, floricane fruiting raspberry cultivar (Rubus idaeus L.) jointly released by Washington State University (WSU), Oregon State University, and the U.S. Department of Agriculture. It has been evaluated at Puyallup, WA, in plantings from 1988 to 2008. In general, ‘Cascade Gold’ has produced large, firm, early-season fruit. In some plantings, ‘Cascade Gold’ was among the highest yielding clones, but in others, yield has been relatively low, especially on sites with root rot. On sites where yield was reduced, the fruit was still among the largest and firmest of the clones in the planting. The fruit is glossy, firm, large-sized, and longer than wide. The fruit has moderate to high soluble solids, low pH, and high titratable acidity, resulting in tart but well-balanced flavor. The fruit releases easily from the receptacle at a light yellow stage of development, but for optimum flavor, the fruit should be more mature (Fig. 1). It is best suited to fresh market use because of its large size, attractive appearance, and firmness.

The cross which produced ‘Cascade Gold’ was made in 1979 at the Washington State University Puyallup Research and Extension Center (WSU Puyallup) between ‘Malling Delight’ as the female parent and a pollen parent recorded as SHRI 6820/41. In 1989, the identity of the pollen parent of ‘Cascade Gold’ was determined to be incorrect (R.J. McNichol, personal communication) and remains unknown. ‘Cascade Gold’ was selected from seedlings in 1983 and designated as WSU 79111-36 for use in breeding but not propagated for further tests. Favorable observations made in 1987 led to a decision to propagate WSU 79111-36 as WSU 991 and evaluate it in replicated plots. In 1992, a decision was made to release ‘Cascade Gold’ based on its high yield and excellent fruit quality, but an unknown virus was detected in all plants of ‘Cascade Gold’ that delayed its release. The unknown virus was subsequently identified as raspberry leaf mottle virus. Plants testing virus-negative were eventually planted in replicated plots at WSU Puyallup in 2007 and plots harvested in 2009 and 2010.

Fruit of ‘Cascade Gold’ was harvested from replicated plantings at WSU Puyallup planted from 1988 to 2008. Plantings were arranged in randomized complete block designs with three replications of plots consisting of three plants with 0.9 m between plants and 2.4 m between rows. The plots were not sprayed for disease or insect control. Fruit was harvested one or two times a week depending on environmental conditions and rate of ripening. The weight of sound fruit and fruit with rot (mainly botrytis) was determined at each harvest. The average fruit weight for the season is a weighted mean based on the weight of a randomly selected 25-fruit subsample from each plot from each harvest and the yield for each harvest. Fruit firmness was measured as the force required to close the opening of gold-colored fruit using a Hunter Spring Mechanical Force Gauge (Series L; Ametek, Hatfield, PA) and was calculated as a weighted mean based on a randomly selected five-fruit subsample from each plot from each harvest.

Fruit samples collected during the 1992 harvest season were analyzed for pH, titratable acidity, and soluble solids. The pH of the juice was measured with a Corning 430 pH meter (Corning, NY), titratable acidity by titration to pH 8.1 with 0.1 N NaOH, and soluble solids with a Goldberg T/C refractometer (American Optical, Buffalo, NY). Fruit samples of ‘Cascade Gold’, ‘Anne’, and ‘Goldenwest’ were collected in 2010 for fruit color and fruit measurements. Color of fruit was measured using a tristimulus colorimeter (Minolta CR-400; Konica Minolta Sensing Americas, Inc., Ramsey, NJ). Measurements were recorded in L*, a*, b* (McGuire, 1992) based on calibration to a standard white reflective plate and the CIE Illuminant C (Commission Internationale de l’Eclariage, Vienna, Austria).

Yield, fruit weight, percent fruit rot, fruit firmness, and harvest season for ‘Cascade Gold’ and three other raspberry cultivars planted in 2008 at Puyallup, WA, in replicated plots and harvested in 2010 and 2011.z 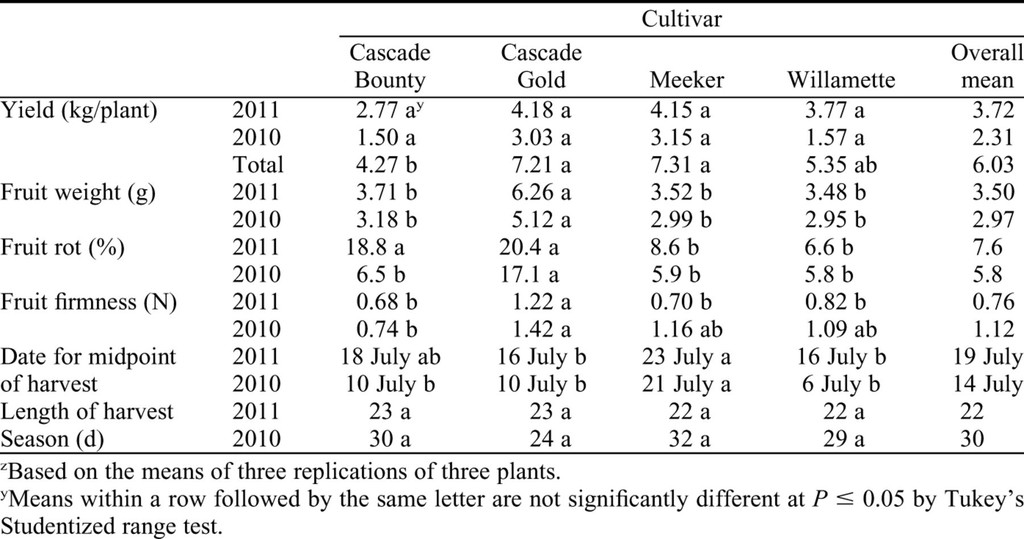 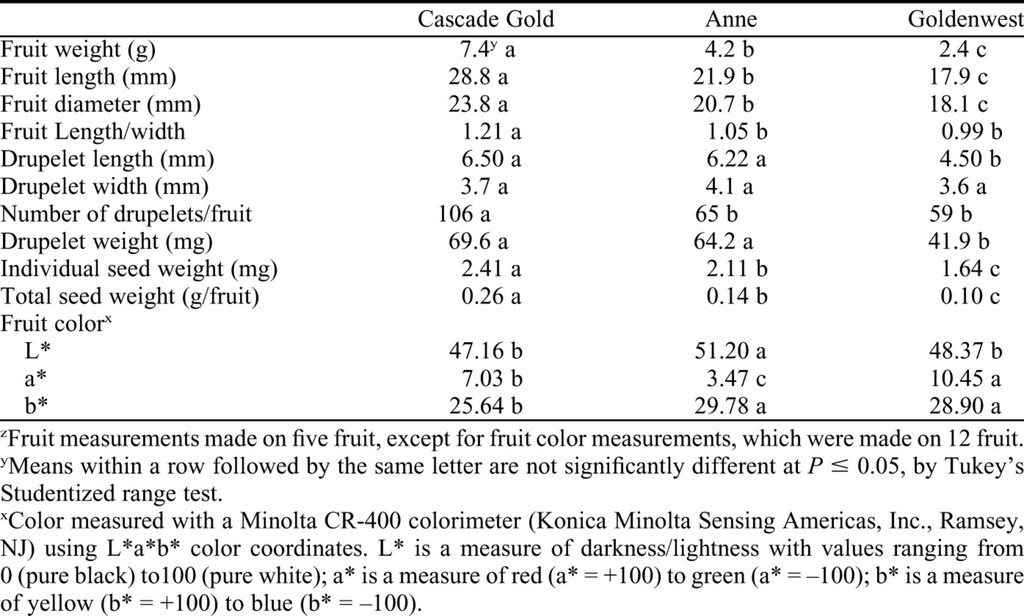 ‘Cascade Gold’ is susceptible to root rot [Phytophthora rubi (W.F. Wilcox & J.M. Duncan) W.A. Man in ‘t Veld.] (Moore and Hoashi-Erhardt, 2012). ‘Cascade Gold’ had high levels of preharvest fruit rot from Botrytis cinerea L. in harvests in WSU–Puyallup plots (Table 1). Grafting tests indicated that ‘Cascade Gold’ was resistant to raspberry bushy dwarf virus. The unknown virus that was detected in ‘Cascade Gold’ in 1992 was identified as raspberry leaf mottle virus, a virus previously thought to occur only in Europe, but which has since been detected in northern Washington (McGavin and MacFarlane, 2010; Tzanetakis et al., 2007). In the PARC trial, ‘Cascade Gold’ supported few aphids (Amphorophora agathonica Hottes). In more recent testing, ‘Cascade Gold’ was determined to be resistant to aphid biotypes A to D and susceptible to E and F (Dossett and Kempler, 2012).

The fruit of ‘Cascade Gold’ is large, glossy, and firm with excellent flavor. The fruit releases easily from the receptacle at a very firm and lightly colored stage of development, allowing for successful long-distance transport. ‘Cascade Gold’ has been successfully grown in western Washington and shipped to eastern U.S. markets. It is best suited to fresh market use.

Names of propagators with certified ‘Cascade Gold’ plants will be supplied on request. The Washington Agricultural Research Center does not have plants for sale. Plant Patent protection will not be sought for ‘Cascade Gold’. 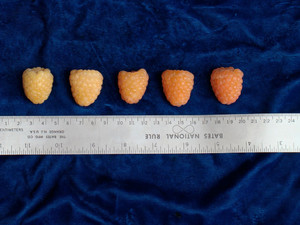