Campsis spp. Lour. (Bignoniaceae) are commonly known as trumpet vines or trumpetcreepers. The genus contains only two species, C. radicans (L.) Seem. and C. grandiflora K. Schum., and their interspecific hybrid, C. ×tagliabuana (Vis.) Rehder (Huxley et al., 1992). Campsis radicans is native throughout eastern North America and is often seen growing along fencerows, utility lines, and embankments. It is an aggressive woody vine (reaching up to 12 m) that frequently sprouts from the base (Anderson, 1933; Uva et al., 1997). The showy trumpet-shaped flowers form on current year’s growth from mid-June through October. Flower colors of different cultivars include yellow, orange, and red. Campsis grandiflora is also a rapid grower with larger and more open funnel-shaped flowers than C. radicans, which typically has apricot/orange flowers. Campsis ×tagliabuana has intermediate characteristics between the two parental species. Although C. radicans is widely adaptable with a long bloom period and showy display of flowers, it can seed prolifically, grows quickly, and is considered weedy in many areas. The highly infertile, C. ×tagliabuana ‘Chastity’ was developed to minimize the reseeding potential of Campsis while maintaining the desirable landscape characteristics. The average number of seedlings per pollinated flower, an overall measure of female fecundity, was reduced from 119.3 for C. radicans to only 0.008 for ‘Chastity’, a reduction in fertility of 99.993%.

Campsis ‘Chastity’ has a vigorous vining growth habit. The flowers are tubular to funnelform with adnate petals dividing into five lobes at the distal end of the corolla in reference to the petiole (Fig. 1). The exterior of the corolla tube is orange [Royal Horticultural Society (RHS) 26B] and the interior of the corolla tube is yellow–orange (RHS 22B) to red (RHS 46A) with red (RHS 46A) striping (RHS, 2001). The corolla lobes are orange (RHS 26B) to red (RHS 46A). The mean length of the corolla of ‘Chastity’ was 53 mm, similar to C. grandiflora ‘Morning Calm’ and C. ×tagliabuana ‘Kudian’, but smaller than C. radicans ‘Flamenco’ (Table 1). Corolla width was measured twice, once at the proximal portion of the corolla closest to the petiole (minimum corolla width) and again at the distal portion of the corolla farthest from the petiole (maximum corolla width). The minimum corolla length of ‘Chastity’ was 10 mm, which was intermediate between C. grandiflora ‘Morning Calm’ (17 mm) and C. ×tagliabuana ‘Kudian’ and C. radicans ‘Flamenco’ (6 mm and 5 mm, respectively) (Table 1). The maximum corolla width was also intermediate between C. grandiflora ‘Morning Calm’ and C. ×tagliabuana ‘Kudian’, although not significantly different from C. radicans ‘Flamenco’ (Table 1).

Comparison of flowers and leaves of selected Campsis cultivars.

Leaves of Campsis are odd pinnately compound with nine to 13 leaflets. Each leaflet is ovate with an attenuated apex and a coarsely dentate margin. Leaf morphology was assessed for a minimum of five fully expanded, mature leaves from each variety. The mean leaf length, leaf width, leaflet length, and leaflet width of ‘Chastity’ were significantly larger than all other varieties except for leaf width and leaflet length of C. grandiflora ‘Morning Calm’ that were similar to ‘Chastity’ (Table 1). Induced polyploidy is known to cause enlarged tissues in many crops (Ranney, 2006), and the increase in leaf size of ‘Chastity’ could be associated with the higher ploidy (2n = 3x).

Male and female fertility was significantly reduced in ‘Chastity’ as assessed by pollen staining, pollen germination, and controlled crosses (Table 2). Pollen staining was performed on fresh pollen from each accession. Pollen was dusted onto a microscope slide, stained with one drop of 1% acetocarmine stain, covered with a coverslip, and incubated at room temperature for a minimum of 90 min. Pink to red well-formed pollen grains were scored as stained. Campsis ‘Chastity’ had 41.6% stained pollen compared with 99.9% for pooled C. radicans (Table 2). Pollen germination was performed using a hanging drop method. Fresh pollen from at least three individual flowers of each accession was placed into a sterile 60 mm × 15-mm polystyrene petri dish. Approximately 500 μL of liquid Brewbaker and Kwack medium (Brewbaker and Kwack, 1963) supplemented with 10 g·L−1 sucrose was added to the pollen and mixed by gently pipetting to form a homogenous solution. To prepare the slides for a hanging drop, the broad end of a pasteur pipette was pressed into white petroleum USP (petroleum jelly) and then applied to a clean microscope slide to form a liberal ring of petroleum jelly. Approximately 36 mg (two drops) of the pollen solution was placed in the center of the petroleum jelly ring. The slide was then inverted and placed in a humidity chamber at room temperature. After an ≈6-h incubation time, hanging drop slides were removed from the humidity chamber. The ring of petroleum jelly was carefully removed, a glass coverslip was applied, and pollen was scored for germination under 150× magnification. Only grains with a pollen tube greater than or equal to the diameter of the pollen grain were scored as germinated. Campsis ‘Chastity’ had only 1% germination, whereas C. radicans cultivars had a mean 75.9% germination (Table 2). Male fertility was also assessed by performing controlled crosses on eight to 24 flowers on each of the diploid Campsis radicans cultivars with pollen from either ‘Chastity’ or bulked pollen from diploid cultivars. Fruit set with pollen from ‘Chastity’ was 0% compared with 65% for pollen from diploid cultivars (Table 2).

To confirm ploidy of ‘Chastity’, flow cytometry and cytology of root tip cells were performed. Pisium sativum ‘Citrad’, with a known DNA content of 2C = 8.75 pg, was used as an internal standard (Greilhuber et al., 2007). Approximately 2 mm2 of young leaf tissue or petal tissue from the sample and leaf tissue from the standard were finely chopped with a razor blade in a petri dish containing 400 μL of extraction buffer (CyStain ultraviolet Precise P; Partec, Münster, Germany). The suspension was filtered through a 50-μm nylon mesh screen to remove plant debris. Nuclei were stained using 1.6 mL staining buffer containing 4′, 6-diamidino-2-phenylindole (CyStain ultraviolet Precise P; Partec). Stained nuclei were analyzed with a flow cytometer (Partec PA-I Ploidy Analyzer; Partec) to determine relative genome size. Ploidy level was determined by comparing the relative genome size of ‘Chastity’ with that of C. ×tagliabuana ‘Madame Galen’. Campsis ‘Chastity’ had a relative genome size of 1.74 ± 0.01 pg, which is ≈1.5 times that of ‘Madame Galen’ with a relative genome size of 1.20 ± 0.00 pg. Cytology of root tip tissue was performed as means to further verify ploidy level. Root tips from rooted cuttings of ‘Chastity’ and ‘Madame Galen’ were collected at 0900 hr and placed into a mitotic inhibitor (2 mm 8-hydroxyquinoline + 70 mg·L−1 cyclohexamide) and maintained at room temperature under dark conditions. After 3 h, the root tips remained in the dark and in this solution and were placed into cold incubation at ≈5 °C for 3 additional hours. Roots were then rinsed three times with cold distilled water, patted dry, and placed into a three-part 95% ethanol:one-part propionic acid solution. Roots were incubated at room temperature in this solution for ≈16 h. After this incubation period, root tips were rinsed three times with 70% ethanol and placed in a glass vial containing 70% ethanol as a storage solution and maintained ≈5 °C until ready for use. Root tips were then placed into 4 mL of hydrolyzing solution consisting of three parts 95% ethanol:one part 12 N HCl for ≈2 min and then were transferred to a modified carbol fuchsin stain (Kao, 1975) for at least 5 min and not more than 30 min. The root tip was excised and moved to a clean microscope slide and covered with one drop of modified carbol fuchsin. The coverslip was used to gently squash the root tissue. Chromosomes were then viewed under oil immersion at 1500× magnification. Campsis ‘Chastity’ had ≈60 and ‘Madame Galen’ had ≈40 chromosomes (Fig. 2), further confirming that ‘Chastity’ is a triploid. Previous studies (Bowden, 1945) reported diploid ‘Madame Galen’ to have a chromosome number of 2n = 2x = 40.

Reduction in fertility can reduce the potential for landscape plants to escape cultivation and become weedy or invasive. Propagule pressure, including production of viable seeds, is an important aspect of invasion potential and has a consistent positive association with the establishment of self-sustaining populations (Colautti et al., 2006). Reducing fertility by decreasing pollen viability, fruit set, seed set, and seed germination mitigates fecundity, propagule pressure, and invasion potential (Anderson et al., 2006). The ability for ‘Chastity’ to spread vegetatively by root sprouts may still allow for local spread; however, its reproductive potential is vastly reduced with a 99.993% reduction in overall female fertility compared with C. radicans and no detectible male fertility based on pollination results. Furthermore, the only single seedling that germinated from ‘Chastity’ (after pollination of 127 flowers representing ≈59,300 potential fertilization events based on an average 467 potential seeds per flower) had an abnormal dwarf phenotype and was never observed to flower. This represents a significant reduction in fertility that would greatly reduce the potential for these plants to reseed and naturalize.

Campsis ‘Chastity’ is a triploid cultivar with highly reduced male and female fertility. This new trumpet vine has attractive ornamental features including showy orange–red blossoms and can be propagated from soft wood cuttings. Rooted cuttings of ‘Chastity’ flowered the next year.

Plants of ‘Chastity’ have been distributed to commercial nurseries. Propagation material may also be available from the MCI Laboratory on request. 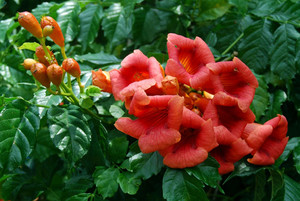