Greenhouse and garden chrysanthemum cultivars, Chrysanthemum ×grandiflorum Tzvelv. (syn. Dendranthema ×grandiflora Tzvelv.; syn. C. ×morifolium Ramatuelle), are grown for use as floral cuts, potted plants, and garden annuals or perennials worldwide with a wide array of flower colors and petal and inflorescence types (Anderson, 2006). Garden forms are the number one herbaceous perennial in the top 15 U.S.-producing states with a wholesale farm gate value of $27.854 million in 2012 (U.S. Dept. of Agriculture, National Agricultural Statistics Service, 2013). Upright plant habit types (for cuts) still maintain limited popularity as a result of their tendency to lodge and provide less flower power (flowering only at the stem apices of each plant). Fall flowering is a popular trait of the garden types, prompting both spring sales in packs or liners (Mother’s Day) as well as fall container or field-dug products (Anderson, 2006; Dole and Wilkins, 2005). The cushion habit, with each plant forming a spherical shape completely covered with fall flowers, was first developed at the University of Minnesota in the 1950s and released in the 1970s. ‘Minngopher’ (PP 4327) was the first patented cultivar with this habit (Widmer, 1978). The cushion habit is now the dominant garden phenotype worldwide (Anderson, 2004, 2006; Anderson and Gesick, 2003, 2004; Kim and Anderson, 2006). Mammoth™ ‘Dark Pink Daisy’ garden chrysanthemum was bred, selected, and introduced to continue this popular and economically successful phenotype.

Mammoth™ series cultivars have to display the cushion phenotype in Year 1 (Fig. 2) and onward (Fig. 3) with the large shrub habit occurring only in the second year of growth and onward (Fig. 3). This shrub growth distinguishes them from classic, dwarfed forms of garden chrysanthemums that match Mammoth™ series Year 1 plants in size that are classified as Chrysanthemum ×grandiflorum Tzvelv. (Anderson et al., 2004, 2008, 2012a, 2012b). Hybrid MN Sel’n. 01-127-1 was selected and approved for release in 2006, by the Minnesota Agricultural Experiment Station, Horticultural Variety Release Committee, as Mammoth™ ‘Dark Pink Daisy’, which is now protected by a U.S. Plant Patent (PP 19,795; Anderson, 2008). This cultivar is taxonomically designated as Chrysanthemum ×hybridum Anderson (= Dendranthema ×hybrida Anderson) Mammoth™ ‘Dark Pink Daisy’ (Anderson, 2008).

After selection of the Mammoth™ ‘Dark Pink Daisy’ ortet as a shrub chrysanthemum in Fall 2002, one-third of its crown was dug from the field (St. Paul, MN; lat. 45° N). The crown portion was kept at 4 °C in darkness for 1000 h whereupon it was potted into Sunshine #8/LC8 Professional Growing Mix (Sun Gro Horticulture, Bellevue, WA) and forced in a greenhouse to produce vegetative shoots (long days, 0800 to 1600 h supplied by 400-W high-pressure sodium lamps + 2200 to 0200 hr night interruption; 18.5/22.0 °C night/day). Clonal ramets of the new cultivar were first taken by stem cuttings in St. Paul, MN, in 2003 and the characteristics of this cultivar proved to be stable, reproducing true to type in successive generations of clonal ramets in subsequent years of propagation (Anderson, 2008). Vegetative tip cuttings were dipped in 1000 ppm indole-3-butyric acid (IBA) in 50% ethanol (EtOH) placed in Oasis wedges (Smithers-Oasis, Kent, OH) in intermittent mist at 21 °C day/night (soil). Cuttings rooted (100%) in ≈1 week. They were subsequently grown in greenhouse conditions (lat. 45° N; St. Paul, MN) for 4 weeks of vegetative growth (long days, 0800 to 1600 h supplied by 400-W high-pressure sodium lamps + 2200 to 0200 hr night interruption; 22.0/18.5 °C day/night) followed by transplanting into field trials in May of 2004 and 2005 for 2- and 1-year-old plants, respectively, at the Southern Research and Outreach Center, University of Minnesota, Waseca, MN (lat. 43.9° N). Plants were grown under natural daylengths until flowering in Sept. 2005 when the comparative trait data were collected.

A detailed description of Mammoth™ ‘Dark Pink Daisy’s above-ground morphological traits as grown outdoors under natural lighting in a trial bed in Waseca, MN, were observed and recorded over a period of 2 years (2004–05). For the U.S. Plant Patent (Anderson, 2008), the detailed botanical data using taxonomic descriptors of Harris and Harris (1994) were collected from 1- and 2-year-old plants between 1300 and 1700 hr on 27 Sept. 2005. Descriptors using RHS Color Charts [Royal Horticultural Society (RHS), 2007] (except where general color terms of ordinary dictionary significance are used) were characterized indoors under fluorescent lighting, 150 μmol·m−2·s−1, on the same date (Anderson, 2008). The phenotype of the new cultivar may vary slightly in differing environmental, climatic, and cultural conditions, but the overall phenotypic range of expression has been deemed stable (Anderson, 2008).

Mammoth™ ‘Dark Pink Daisy’ has stem coloration of RHS 144A and 144B–C in the first and second years of growth. Lateral branch lengths averaged 24 cm with mean diameters of 2.5 mm (Anderson, 2008). On average, Mammoth™ ‘Dark Pink Daisy’ will produce 160 shoots per plant crown in the second year. Each shoot has as many as 3.7 lateral branches if the apical meristems are removed; mean length of internodes is 1.3 cm.

Simple leaf division and leaf blade shape of ovate to obovate with a narrow region extending toward the base of each leaflet (Harris and Harris, 1994) characterizes Mammoth™ ‘Dark Pink Daisy’ (Fig. 4; Anderson, 2008). The leaf base is cuneate with a mucronate leaf apex with leaf margins that are incised (Morus or mulberry-like incision) to a depth of 1 cm. Leaf venation has coloration of RHS 147C on the glabrous upper (adaxial) surface and RHS 138C on the lower (abaxial) slightly pubescent side (Fig. 4). An alternate leaf phyllotaxy occurs (one leaf/node) with a sessile attachment to the stem. There are 18.25 leaves (nodes) per stem (= long-day leaf number) initiated before the terminal flower bud. Leaf coloration is RHS 137A and RHS 137C on the adaxial and abaxial sides of the young foliage and changing to RHS 137B and RHS 138B, respectively, on the mature foliage. Fully expanded leaf size, on average, is 5.5 cm × 2.9 cm (length × width).

Mammoth™ ‘Dark Pink Daisy’ capitulate inflorescences (hence referred to as “flowers”) are composite inflorescences, as a member of the Asteraceae (syn. Compositae), consisting of ray (petal; gynoecious) and disk (hermaphroditic; perfect) florets. A second-year plant may produce as many as 6080 flowers on average based on actual counts (Anderson, 2008). Flower buds are flattened, globose in shape with an average depth of 7.4 mm and 5 mm diameter with a color of RHS 138C and involucral bract or phyllary stripes (RHS 138A). Involucral bracts are crenulate, glabrous on the surface, 2 to 4 mm × less than 1 mm (length × width) with a color of RHS 137B. On average, mature flowers at anthesis have a depth of 1.4 cm and a total diameter of 6.35 cm of which 1.3 cm is the disk diameter (Fig. 5).

Peduncles of Mammoth™ ‘Dark Pink Daisy’ are strongly held at an angle of 55° to the stem and have an hirsute texture with an RHS 144D color rating (Anderson, 2008). The first and fourth peduncles average 11 cm and 15.25 cm (length), respectively, with coloration of RHS 144A.

The perfect, carpellate disk florets of Mammoth™ ‘Dark Pink Daisy’ are tubular in shape with toothed tips produced with an average of 158 ovules/floret (Anderson, 2008). Anther coloration is RHS 16A with the moderately abundant trinucleate pollen colored RHS 13A. At the culmination of embryogenesis (mature seeds), each achene (indehiscent fruit), lacking pappi (awns or bristles), is a compressed oval shape with pointed ends, ≈2 to 5 mm × 1 to 2 mm (length × width). The outer surfaces are ridged and RHS 200D in color.

Mammoth™ ‘Dark Pink Daisy’ in containers, landscapes, or as field-grown plants at first has a semiprostrate phenotype in Year 1 (Fig. 2), whereas in Year 2 and thereafter the cultivar maintains a tight cushion and shrub plant habit (Fig. 3). Characteristic of the Mammoth™ series (Anderson et al., 2004, 2008, 2012a, 2012b), Mammoth™ ‘Dark Pink Daisy’ has extreme heterosis after two seasons of growth and onward with unclipped/unpinched shrubs growing to 62 cm × 133 cm (height × width; Anderson, 2008).

Geometric means were calculated for comparative trends in winter survival with arithmetic means over multiple years and locations for these trials, because the former measure means survival ratings (%), determining the normalized value of a range of positive numbers such that no particular data set for any location or year dominates the mean weighting (Ouellet, 1976). The geometric mean (G) for winter survival at l (locations) in y (years) formula is calculated as:

with n representing the number of replications at each ly site. With garden chrysanthemums, winterhardiness (percent survivorship) has classically been expressed with arithmetic means (where values are added rather than multiplied). Geometric means were first used by Anderson et al. (2012b) to express winterhardiness in garden chrysanthemums and, later, by Anderson et al. (2014) as a more accurate gauge of winter survival. Annual geometric means (Gly) for years and locations ranged from 44.7% (2008) to 85.73% (2004), a year with inadequate snow cover (Table 2); all Gly were lower than the corresponding arithmetic means. Gly could not be calculated in 2005 because it contained 0.0% winter survival (Table 2); Gly includes only positive numbers greater than zero (Ouellet, 1976). In 2003, neither arithmetic means nor Gly were calculated because there was only one average at one location (Table 2). The grand Gly for all years and locations could not be calculated for Mammoth™ ‘Dark Pink Daisy’ because, again, data included zeroes. One occurrence of 0.0% winter survival limited the use of Gly in this year (2005; Table 2). The grand arithmetic mean was 72.0% for all years (Table 2). Winter survival in lower latitudes (data not shown) demonstrated that Mammoth™ ‘Dark Pink Daisy’ also survives to USDA 9 (Southeast)/Zone 10 (West). Thus, the complete winterhardiness range of Mammoth™ ‘Dark Pink Daisy’ is USDA Z3b to Z9 (Southeast)/Zone 10 (West) (Anderson, 2008; Table 2).

Mammoth™ ‘Dark Pink Daisy’ is a facultative short-day plant (Anderson, 2008) and may be produced for Mother’s Day spring bedding plant sales in packs or liners for subsequent direct transplanting in gardens, containers, or fields for growth and fall flowering (Figs. 2 and 3). Mammoth™ ‘Dark Pink Daisy’ may also be grown in “mum pans” outdoors for fall sales (Langevin, 1992).

Adaxial (above) and abaxial (below) leaf profiles of MN Sel’n. 01-127-1, MammothTM ‘Dark Pink Daisy’. Arrow denotes the fine extension of the leaf to the base of the petiole. Bar = 1 cm. 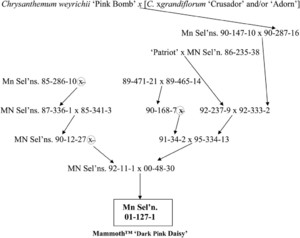 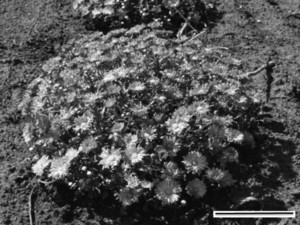 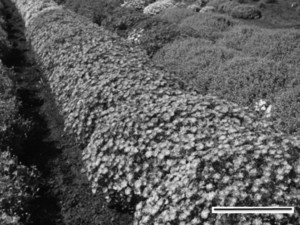 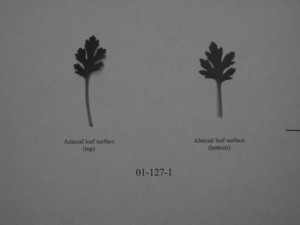 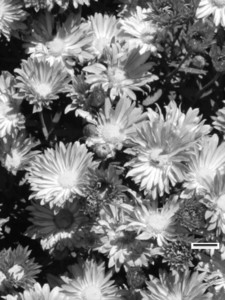