Lagerstroemia indica L., commonly referred to as crape myrtle or crepe flower, is an upright, wide-spreading, deciduous shrub or small tree in the loosestrife family Lythraceae. It is native to the Himalayas through southern China, Southeast Asia, and Japan (Huxley, 1992) and has been cultivated as an important flowering ornamental tree for more than 1500 years in China (Chen, 2001). Crape myrtles were introduced into North America in the late 1700s and became naturalized in the United States from Virginia to Arkansas south to Texas and Florida (Byers, 1997; Dirr, 1998; Egolf and Andrick, 1978). Currently, more than 200 named cultivars are available (Pooler, 2006a) and widely produced for different flower colors, growth forms, and exfoliating bark (Pooler, 2006b; Pooler and Dix, 1999; Pounders et al., 2013; Whitcomb, 1998, 2004, 2006). Breeding of crape myrtles has also been active in China (Cai et al., 2010), including genetic improvement of flower color, size, and fragrance (Ye et al., 2010; Zhang et al., 2008, 2010), resistance to aphids and powdery mildew (Chen et al., 2007), tolerance to chilling temperature, and extended flowering period (Wang et al., 2013). Currently, more than 120 cultivars are available in China (Huang et al., 2013; Wang et al., 2008).

Crape myrtles flower on the current year’s shoots (Huxley, 1992). After pollination, ovaries begin to expand into developing seeds and the showy flower petals senesce. In general, no new flowers will be produced on the spent shoots. To have continuous blooming, plants are pruned; a new flush develops in 4 to 5 weeks, from which additional flowers are produced. In addition to pruning, another approach for extending flowering period would be to have plants that do not produce seeds (Pooler, 2006a). Seedless plants would conserve energy to support reblooming on the spent shoots.

This report describes a selection of mutant crape myrtle plant that does not produce seed and reblooms on the same panicles, extending the flower period. A 4-year field trial showed that the characteristics of this mutant are stable, and it has been introduced as a new cultivar in the Chinese ornamental plant market.

A pink flowering crape myrtle plant (Fig. 1A) was identified in Fengshu Village, Taoyuan County, Hunan Province, during a survey of crape myrtle genetic resources led by Hunan Academy of Forestry in 2006. The plant had no fruit and subsequent observation indicated that this plant rebloomed on the spent panicles. To isolate this individual, mature buds from this plant were grafted onto branches of 10 plants of a pink flower cultivar Pink (Fig. 1B) in Fall 2006. ‘Pink’ has dark green leaves and abundant flowers. The grafted plants were compared with ‘Pink’ (Fig. 1C) from 2007 to 2009. Three-year evaluation indicated that the grafted plants grew as vigorously as ‘Pink’ and produced abundant flowers (Fig. 1D) without fruit (Fig. 1E). Meanwhile, cuttings were produced from the grafted plants as well as two popular L. indica cultivars, Red Flower and Red Leaf, in 2007. ‘Red Flower’ has green leaves and deep pink flowers. New leaves of ‘Red Leaf’ are dark red and mature and old leaves are reddish green and flowers are pink. Plant growth and flower characteristics of this mutant were compared with ‘Red Flower’ and ‘Red Leaf’ from 2010 to 2013. Results showed that the characteristics of this mutant, i.e., no fruit or seed, continuous flowering on the spent panicles, and prolonged flowering period, were stable. The mutant was named as L. indica ‘Xiangyun’ in accordance with the International Code of Nomenclature for Cultivated Plants (Brickell et al., 2009). A specimen of this cultivar has been deposited at the Experimental Station of Hunan Academy of Forestry as a cultivar standard.

‘Xiangyun’ is a shrub that can grow up to 2.8 m with a trunk caliper of 3.5 cm in 4 years from rooted cuttings. The trunks are attractive and have exfoliating bark, particularly noticeable in winter. The plant canopy is a dome-shaped crown. New branches average 98.5 cm in length and 0.59 cm in diameter. Leaves are green, 137A according to the Royal Horticultural Society Color Chart (Royal Horticultural Society, 2001), opposite, simple, and oblong with entire margins. Mean leaf length is 7 cm and width is 3.9 cm. Panicles are terminal, cylindrical to a mean length of 27.3 cm and diameter of 23 cm. There are more than 40 flowers per panicle. Flowers are pink, N66C and are 4.3 cm in diameter and 5.2 cm in length. Petals are fan-shaped, clawed, and six per flower. Stamens are ≈42. Fruit or seed was not observed on this cultivar even when it was grown side by side with other cultivars such as ‘Red Leaf’ or ‘Red Flower’ that produce abundant fruit and seed. To date, the mechanism underlying the seedless nature of this cultivar is unclear.

‘Xiangyun’ is propagated using softwood stem cuttings or budding techniques. Methods of in vitro propagation have not been developed for this cultivar. For cutting propagation, the basal end of single-eye or multiple-eye cuttings should be dipped in 2000 mg·L−1 K-IBA (potassium salt indole-3-butyric acid) solution for 40 s and then stuck in a soilless substrate such as 50% peat, 30% perlite, and 20% pine bark. Cuttings can root in 2 weeks when the temperature is above 20 °C. ‘Xiangyun’ can be easily grafted to other L. indica cultivars using budding techniques. Grafted buds appear in 2 weeks and produce new branches if an ambient temperature is above 20 °C.

To further evaluate its performance, ‘Xiangyun’ was compared with two popular cultivars, Red leaf and Red Flower, in Changsha, Hunan Province, from 2010 to 2013. Ten 3-year-old plants from cuttings of ‘Xiangyun’, ‘Red Leaf’, and ‘Red Flower’ were planted in the Experimental Station of Hunan Academy of Forestry, which is located between 111°53′ and 114°05′ E longitude and 27°51′ to 28°40′ N latitude. Annual average temperature is 17.03 °C with a mean of 4.6 °C in January and 29.0 °C in July. Average annual precipitation is 1331 mm and a maximum photosynthetic photon flux density of 2000 mmol·m−2·s–1. The experiment was a completely randomized design with 10 replications. Branch and flower panicle lengths and diameters were measured using either a rule or a Vernier caliper from 2010 to 2013. Data were analyzed by analysis of variance (SAS GLM; SAS Institute, Cary, NC), and mean separations were performed using Fisher’s protected least significant differences at the 5% level. Results showed that mean branch length and diameter of ‘Xiangyun’ were 78.2 cm and 0.52 cm in 2010 and 106.6 cm and 0.64 cm in 2011, respectively, which were significantly greater than ‘Red Flower’, but the differences between the two cultivars became insignificant in 2012 and 2013 (Table 1). Branch lengths and diameters of ‘Red Leaf’ over the years were similar to ‘Xiangyun’ except for the branch length in 2010. Flower panicles of ‘Xiangyun’ and ‘Red Leaf’ were similar but significantly greater than ‘Red Flower’ (Table 2).

Bud break of the three cultivars occurred at the same time, mid-March (Table 3). The first flower appeared in mid-June for both ‘Xiangyun’ and ‘Red Leaf’ but ≈10 d later for ‘Red Flower’. The full bloom period for ‘Xiangyun’ started mid-July and extended to early October, but full bloom for both ‘Red Leaf’ and ‘Red Flower’ ranged from mid-July to early September. ‘Xiangyun’ flowering ended in early November (Fig. 1F) with no fruit or seed, and defoliation started in late November. ‘Red Leaf’ ended flowering in mid-October, fruit matured in October to November, and defoliation occurred in mid-November. ‘Red Flower’ ended flowering in early October, and fruit mature and leaf defoliation were the same as ‘Red Leaf’. The distinct characteristics of this new cultivar, no fruit or seeds, reblooming on the same panicles, and extended flower period, were stable. ‘Xiangyun’, therefore, should be a valuable addition to the landscape industry.

Limited numbers of rooted cuttings of L. indica ‘Xiangyun’ are available for research purposes and can be obtained from Xiaoming Wang, the Hunan Key Laboratory for Breeding of Clonally Propagated Forest Trees. 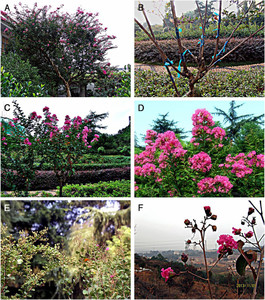