Search for other papers by Randy G. Gardner in
ASHS
Google Scholar
PubMedClose

‘Mountain Rouge’, the F1 hybrid of NC 161L × ‘Pink Brandywine’ (Fig. 1), resulted from a tomato breeding effort initiated in 2005 to develop a superior heirloom-type, pink-fruited tomato hybrid with improved fruit quality and late blight resistance. ‘Mountain Rouge’ (tested as NC 08224) was first crossed in the spring of 2008 and was grown in an observational trial at the Piedmont Research Station, Salisbury, NC, in the fall of 2008. Based on its favorable performance in that trial, it was selected for more advanced testing. It was grown in replicated trials at the Mountain Research Station (MRS), Waynesville, NC, in 2009 and 2011 and has been widely tested in grower plantings in western North Carolina and the northeastern United States. The MRS, Waynesville, is a high-elevation area in North Carolina and is suitable for late blight testing.

The development of parent line NC 161L began when a cross was made in the fall of 2005 between NC 2CELBR and TB (x)-9, an F2 selection of the Japanese pink-fruited, greenhouse hybrid tomato ‘Momotaro’ (‘Tough Boy’). NC 2CELBR was the source of the Ph-2 and Ph-3 genes for late blight resistance (Gardner and Panthee, 2010) in the NC 161L parent line. An F2 population from the resultant cross, NC 0652, was grown in the field during the summer season of 2006 and selected for late blight resistance and desirable horticultural traits, including pink fruit color. An F3 generation selection, 161L-1W (2007), with desirable horticultural traits and a high level of late blight resistance was made in the field in 2007. A subsequent F4 generation selection was made in the greenhouse to develop the line NC0652(x)-1W-1W-1, which was bulked and subsequently released as NC 161L.

Fruit of ‘Mountain Rouge’ ripens to an attractive pink color and are more firm in the fully ripe stage than similar heirloom tomatoes. The fruits are deep oblate and slightly irregular in shape with small, well-healed blossom-end scars. Fruits are significantly smoother than their heirloom parent ‘Pink Brandywine’. Immature fruits have a dark green shoulder color. Flavor and fruit texture of ‘Mountain Rouge’ have been rated as excellent in subjective taste evaluations in research station plots and in growers’ trial plots.

Presence of the Ph-3 and Mi genes for resistance to late blight and RKN, respectively, were verified by molecular markers tightly linked to the resistance genes (Fig. 2).

In a conventional culture trial at Mills River, NC, in 2010, NC 161L performed well in comparison with the inbred lines NC 714 and NC 1CS, which are the parents of the recently released hybrid ‘Mountain Majesty’ (Panthee and Gardner, 2011). NC 161L was smaller-fruited than either of control lines (Table 3). In an organic culture, replicated trial in 2011, NC 161L performed extremely well in marketable yield compared with ‘Cherokee Purple’ and ‘Pink Brandywine’ (Table 2). Its total yield did not differ from the other entries in the trial, but its marketable yield was much higher because of substantially less fruit cracking and other fruit defects.

NC 161L has a vigorous, tall-growing determinate plant (sp gene) with good foliage cover for fruit protection. Fruit are deep oblate in shape and symmetrical with smooth blossom-end scars and smooth shoulders. Immature fruit have a dark green shoulder color, and fruit pedicels are jointed. The fruits develop an attractive pink surface color when ripe and are moderately firm. Flavor of NC 161L has been rated as good in subjective taste tests. NC 161L is moderately susceptible to radial fruit cracking under field growing conditions.

A high level of late blight resistance is present in NC 161L based on the presence of Ph-2 and Ph-3 genes and its field trials at Waynesville, NC, in 2006 and 2007 where late blight was severe in both years. A high level of late blight resistance was also observed in an organic trial at Waynesville, NC, in 2009 in the F1 hybrids NC 08144 and ‘Mountain Rouge’, both of which use NC 161L as a parent. Presence of Ph-3 and Mi genes in NC 161L was confirmed by molecular markers tightly linked to the genes (Fig. 2). Based on disease resistance genes present in both of its parents, NC 161L should be homozygous for the I gene for resistance to race 1 of fusarium wilt and for the Ve gene for verticillium wilt resistance. However, these resistances have not been verified.

‘Mountain Rouge’ provides growers in North Carolina and other states with similar growing conditions a high-yielding, disease-resistant, fresh-market tomato cultivar with good fruit quality and similarities to widely grown pink-fruited heirloom varieties. The combined resistances to late blight and RKNs are valuable additions in disease resistance for growing areas where these diseases are a problem. NC 161L should also be of interest to other tomato breeders as a single source of combined resistances to important tomato diseases and nematodes. NC 161L’s desirable combination of plant, fruit quality, and disease resistance traits should make it useful in further breeding of pink tomatoes and as a parent in developing other pink-fruited tomato hybrids with late blight and RKN resistances.

‘Mountain Rouge’ was released on an exclusive basis for seed production and sales to Bejo Seeds, and commercial seed should be available in 2015. Distribution of seed of NC 161L to other breeders requires a signed seed transfer agreement, which can be downloaded at the following web site: <http://www.mountainhort.ncsu.edu/programs/tomato/releases/tomato-seed-transfer-agreement.pdf>. Small trial samples of ‘Mountain Rouge’ are available from D.R. Panthee (dilip_panthee@ncsu.edu), MHCREC, 455 Research Drive, Mills River, NC 28759. 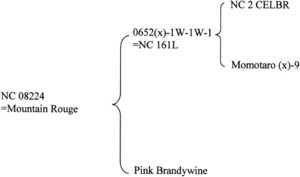 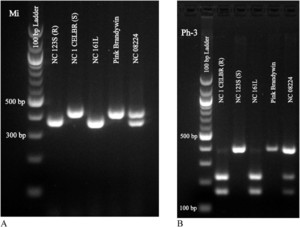