Six dual-purpose sweetpotato [Ipomoea batatas L. (Lam.)] cultivars, RW1117, RW111860, RW112419, RW112560, RW112910, and RW114923, were approved for release by the Plant Variety Release Committee of Rwanda in Feb. 2013 (RAB, Rwanda Agriculture Board, 2013). Sweetpotato forms a major part of the diet of both rural and urban communities in Rwanda. Moreover, the crop is expected to become more important with time as farmers engaged in mixed crop–livestock systems increasingly use vines as animal feed. Its use for both food and feed makes it attractive in areas where land availability is a constraint. Moreover, the implementation of the Rwandese government policy, which encourages use of zero grazing practice to mitigate soil erosion, emphasizes the use of sweetpotato as an alternative source of animal forage (MINAGRI, 2013).

The six released cultivars have relatively high dry matter content (≈30%) and have good to high consumer acceptance. The cultivars also have moderate to high levels of field resistance to sweetpotato virus disease (SPVD) and Alternaria bataticola blight and yield higher (8.3 to 22.8 t·ha−1) than the average storage root yield of 6.0 t·ha−1 [FAOSTAT, 2011; International Potato Center (CIP), 1999]. Two of the released cultivars, RW11-2910 and RW11-2560, are orange-fleshed sweetpotato (OFSP), providing consumers with moderate to high beta-carotene (provitamin A) with potential to alleviate vitamin A deficiency. Thus, the official release of these dual-purpose sweetpotato cultivars for both food and animal feed, developed through on-station evaluation and farmer participatory selection, to augment the food and farming systems in Rwanda is reported.

The six sweetpotato cultivars, RW11-17, RW11-1860, RW11-2419, RW11-2560, RW11-2910, and RW11-4923, are field seedling selections from the sweetpotato program of the Rwanda Agriculture Board (RAB, Rwanda Agriculture Board, 2013). The cultivars were selected from bulked seed from an open-pollinated polycross nursery of 60 parents established in 2010; their male pedigrees are unknown. The 60 parents in the polycross comprised 30 introductions and 30 landraces collected from different major agroecological zones of Rwanda (Table 1). All the 60 parents were used in the polycross as sources of one or a combination of genes controlling important desirable traits. During the evaluation, the six clones were coded as follows: abbreviation for Rwanda, the last two digits of the year (2011) the genotype was initially selected (11), and the genotype selection number. The codes of these cultivars became the official names at cultivar release. All the six cultivars were respectively, the progenies of the following female parents: ‘Ejumula’, an OFSP landrace introduced from Uganda; ‘2000-203’, a RAB breeding line; ’97-062’, also, known as Gihingamukungu, orange-fleshed, released in 2004; ‘Mugande’, bred and released by RAB in 2004; ‘SPK004’, an OFSP landrace introduced from Kenya; and ‘Ukerewe’, a yellow-fleshed cultivar from Tanzania.

Origin and main attributes of sweetpotato parents used in the 2009–10 polycross nursery at Rubona, Rwanda.z 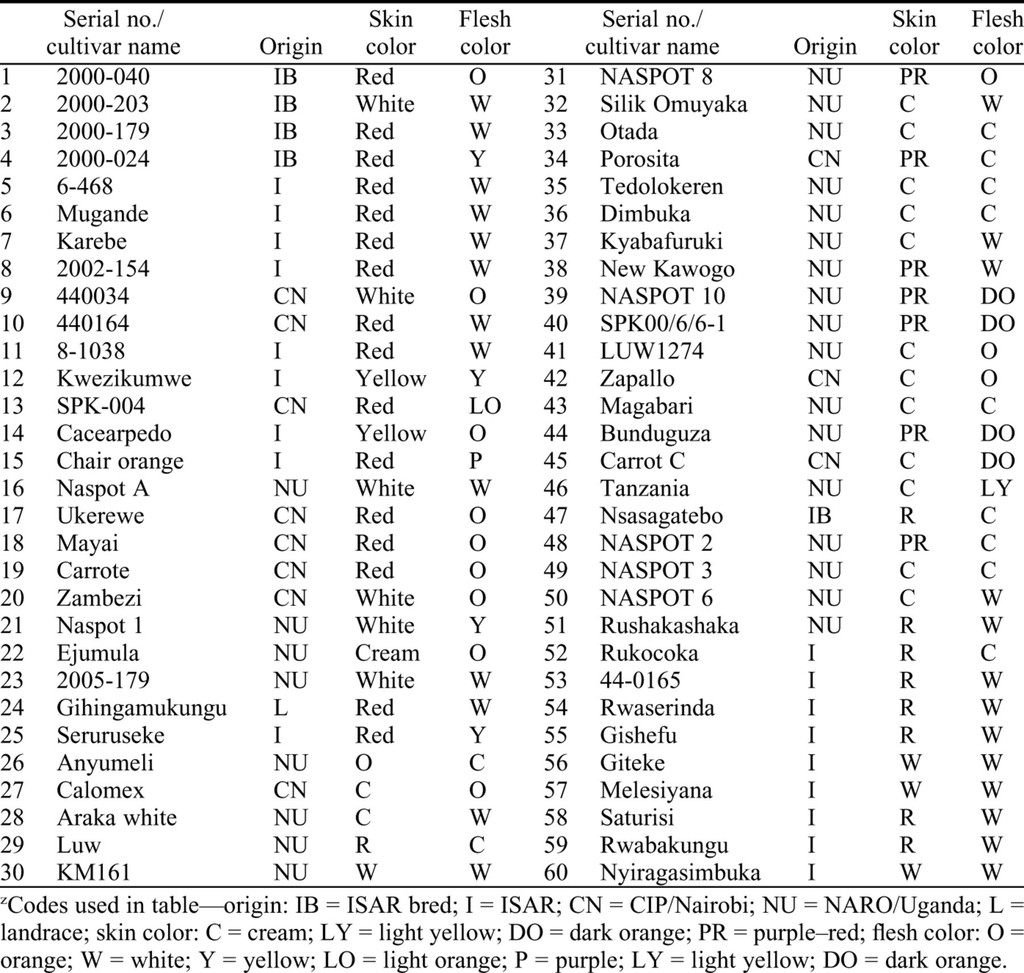 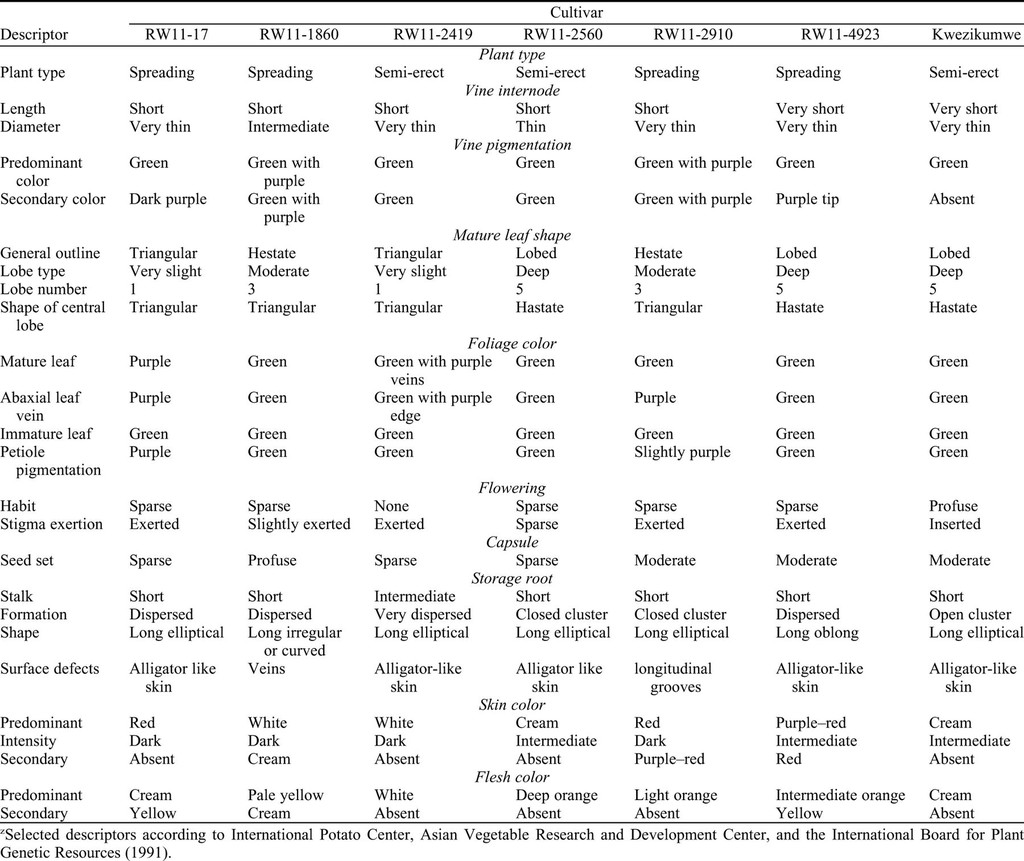 Dual-purpose sweetpotato cultivars were developed through farmer participatory selection using the accelerated breeding scheme (Grüneberg et al., 2009). A total of 8000 true seeds from the polycross described in the subsection, origin, were scarified in concentrated sulfuric acid, germinated in a screenhouse, and vine cuttings from the seedlings were used to establish a seedling nursery at Rubona in Rwanda. In total, 5380 well-established genotypes were selected from the seedling nursery. Five vine cuttings of each genotype were planted on ridges 0.8 m apart and 0.3 m between plants in an observation trial at Rubona, Karama, and Ngoma in a randomized complete block design with two replications during the 2011B season (second rainy season).

Data were collected on storage root weight, marketable roots (root diameter greater than 25 mm), vine weight, and biomass. To assess dry matter (DM) of storage roots and vines, 200 g from each clone was oven-dried at 65 °C to constant weight, and DM was computed as a percentage of the fresh weight. Selection of dual-purpose clones was based on the ratio of roots to vines in terms of dry matter yield, where a clone with a ratio of 1.5 to 2.0 was classified as dual purpose (Claessens et al., 2009). The data were analyzed using the GenStat 12th edition statistical software (GenStat, 2009).

Following the accelerated breeding scheme of Grüneberg et al. (2009), the six released cultivars performed as well as the local control in on-station tests for marketable storage root yield, vine yield, SPVD, and Alternaria blight resistance. ‘RW11-2910’ and ‘RW11-4923’ had similar total and marketable storage root yields to the local control, whereas the other four cultivars had significantly higher storage root yields than the control (Table 3). Compared with the local control (‘Kwezikumwe’), cultivar RW11-2560 had higher mean total storage root yields across the three locations as well as in on-farm trials, 22.8 t·ha−1 and 13.4 t·ha−1, respectively (Tables 3 and 4) . Yields reported here are higher than yields reported by DONATA (2012), FAOSTAT (2011), and RAB, Rwanda Agriculture Board (2013) survey where the storage root yield average was 6 to 7 t·ha−1. Based on the field evaluations, the six released cultivars had a root-to-vine ratio more than 1.5 and therefore are suitable for dual-purpose use in the mixed farming systems of Rwanda. Apart from ‘RW11-2419’ and ‘RW11-2560’ with 24.9% and 21.0% DM, respectively, the other four cultivars had high storage root DM of greater than 30% (Table 4), fitting well with Rwandan starch and sugar level preferences in sweetpotato (Ndirigwe, 2006). Cultivars RW11-2560 and RW11-2910 are orange-fleshed with potential to contribute to reduction of vitamin A deficiency if consumed by the communities in Rwanda (DONATA, 2012). In general, all cultivars showed moderate resistance to SPVD, Alternaria stem blight, and sweetpotato weevil attack. 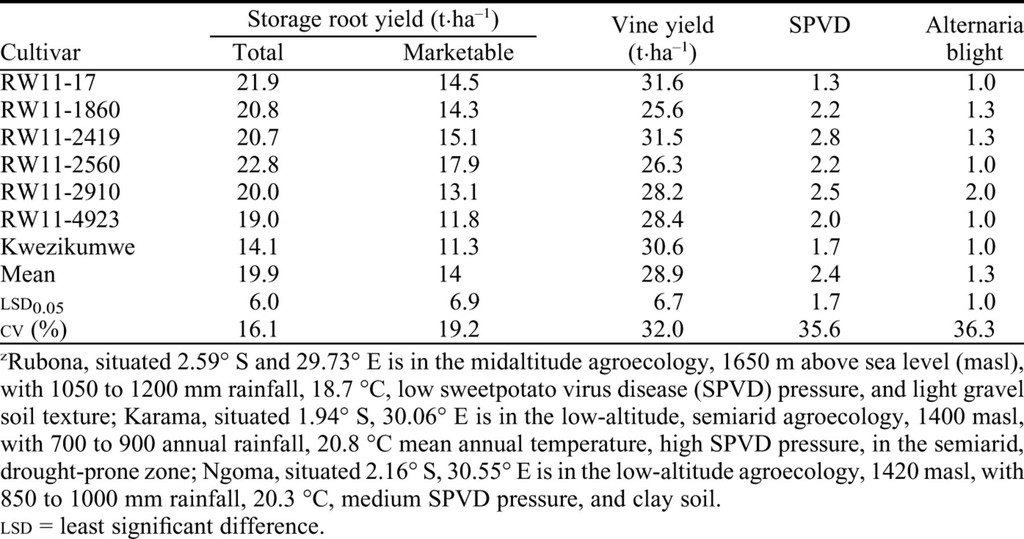 Yield quality attributes and reaction to pests and diseases on-farm of six sweetpotato cultivars released in Rwanda in Feb. 2014.

Of a total of 30 districts in Rwanda, the released cultivars have been disseminated in seven districts, namely, Huye, Nyamagabe, Ruhango, Muhanga in the southwest, Kamonyi in central, Bugesera in the south, and Ngoma in the southeast. Dissemination was mainly through farmer-to-farmer exchange or sale of planting material. Most seed companies do not disseminate sweetpotato planting material. Sweetpotato planting material reached farmers in the mentioned districts through RAB projects and various development partners such as Catholic Relief Services, Young Women Christian Association, the farmers’ federation (Imbaraga Syndicate), World Vision, and Africare.

The released cultivars are currently maintained in the open field of RAB at Rubona, Rwanda. Requests for planting material should be addressed to: Sweetpotato Program, RAB, P.O. Box 5016 Kigali, Rwanda.