Dried flowers and buds of Lonicera L., particularly L. japonica Thunb., are known as “Jinyinhua” in Chinese or flos lonicerae, which is one of the most popular herbs of traditional Chinese medicine (Yuan et al., 2012). Flos lonicerae contains essential oils, organic acids, flavones, saponins, and iridoids (Shang et al., 2011). Among them, 5-O-caffeoyl-quinic acid or chlorogenic acid (CGA) has been identified as one of the most active compounds. In vitro assays showed that CGA has antioxidant, anti-inflammatory, anticarcinogenic, and antiviral activities (Arion et al., 1997; Hu et al., 2001; Lee et al., 1998; Qiu et al., 2013; Wu et al., 2007; Yang et al., 2004). As a result, the content of CGA has been used by the Chinese Pharmacopoeia (Committee for the Pharmacopoeia of PR China, 2010) as the indicator compound for the evaluation of the quality of flos lonicerae (Shang et al., 2011).

Since the outbreak of severe acute respiratory syndrome in 2002 and avian influenza viruses in 2003 in China, the use of flos lonicerae has significantly increased (He et al., 2013). The commercial value of flos lonicerae in the herbal medicine market has increased more than 400%; and over 30% of the current traditional Chinese medicine prescriptions have this herb as a key component (Yuan et al., 2012). The high demand for flos lonicerae has resulted in increasing activity in the evaluation of genetic resources and the selection and production of lonceras with high CGA content and high flower yield in China (Chen et al., 2013; Shang et al., 2011; Wang et al., 2004, 2009). Lonicera macranthoides Hands.-Mazz. is a species native to China (Xu and Wang, 1988) and has been found to contain CGA up to 4.5% compared with 2.2% to 2.5% in the commonly used L. japonica (Zhou and Tong, 2003). Wang et al. (2004) isolated three naturally occurring mutants: ‘Jincuilei’, ‘Yincuilei’, and ‘Baiyun’ of L. macranthoides from Hunan province, China, which had CGA contents of 5.92%, 5.83%, and 6.97%, respectively, compared with 4.3% in their parental plants. Chen et al. (2013) identified a mutant ‘Longhua’ from L. macranthoides populations with CGA content of 7.25%. This report documents another mutant, ‘Huayao-Wanshou’, from Lonicera macranthoides.

In an effort to evaluate Lonicera genetic resources in Hunan Province in 2005, a plant with abundant flower buds was discovered next to a flowering L. macranthoides plant (Fig. 1A) in Huxingshan Village, Longhui County. Further observations revealed that the flowers of this plant never opened and flowers became mature (flowers in yellowish color) (Fig. 1B) more than 10 d later than the other L. macranthoides plants. Because L. macranthoides seldom produces seeds in its natural habitat, this unique plant was propagated by grafting in 2006. Subsequent evaluation showed that this plant had three traits that were different from its parental plants: 1) the plant produced more branches, and each bore abundant flowers; 2) the flowers were serotinous, maturing 10 to 15 d later than its parental plants and other L. macranthoides cultivars such as ‘Jincuilei’; and 3) the flowers never opened. Therefore, this plant was considered a mutant of L. macranthoides and named ‘Huayao-Wanshou’ in accordance with the International Code of Nomenclature for Cultivated Plants (Brickell et al., 2009). A specimen of the cultivar has been deposited at the Experimental Station in Longhui County as the cultivar standard.

The canopy of ‘Huayao-Wanshou’ is dome-shaped. An average height for 5-year-old plants is 1.7 m with a canopy diameter of 4.0 m. Leaves are simple and opposite, ovate to oblong with a round base and acuminate apex. The upper leaf surface is azure green, and the underside is yellowish green. The mean length of mature leaves is 9.3 cm with the widest width of 5.7 cm. The petiole length averages 0.7 cm, and new branches appear reddish in color.

Flower buds are green and clustered axillarily and at the terminal (Fig. 1). The corolla is tubular, and each young bud apex has two bulges (Fig. 1A-2). With the development of the flower buds, the bulges disappeared, and the upper portion of the tube expanded more than the base portion. Mature corollas are slightly curved, indehiscent, yellowish white, and 3.93 cm in length. The apex diameter is 2.5 mm and base diameter is 1.3 mm. The plant produced more branches, appearing denser and more compact than its parental plants and other L. macranthoides cultivars. A branch can bear up to 11 flower clusters axillary and three clusters terminal. Mean flower numbers are 17.6 in each cluster arranged in cymes or racemes. The calyx is green without woolly hair in the tube. The flowers never open and plants have not been seen bearing any berries.

‘Huayao-Wanshou’ propagation relies on grafting and cutting. There has been no report of micropropagation of this mutant. Cultivars of L. macranthoides and L. japonica can be used as rootstocks for grafting. Grafted plants flower in the second year if the rootstocks have a height of 50 cm. Cuttings can be either single eye or multiple eyes and should be made from plants less than 3 years old. Rooted cuttings grow more than 1 m in 3 years and plants flower thereafter. Similar to ‘Longhua’ (Chen et al., 2013), ‘Huayao-Wanshou’ can grow in different soil types with pH ranging from 5.5 to 7.5 in mountains, hills, or plains. Rooted cuttings or grafted plants should be planted 2.1 m apart (≈2250 plants per hectare) and fertilized before sprouting with 0.15 kg N–P2O5–K2O and 0.1 kg magnesium per plant. After spring pruning, well-composted organic fertilizers should be applied at 2 kg per plant. ‘Huayao-Wanshou’ in Hunan Province sprouts at a temperature as low as 5 °C, i.e., in early February. Flower buds appear in middle May and flowering peaks in middle July.

To evaluate the flower yield and CGA content of ‘Huayao-Wanshou’, a field trial was conducted in Longhui County, Hunan Province. Grafted ‘Huayao-Wanshou’ plants were compared with parental L. macranthoides as well as a previously selected cultivar, Jincuilei, that were also graft-propagated at the same time as ‘Huayao-Wanshou’. The trial site is 1320 m above sea level and has an annual rainfall of 1293 mm, an annual mean temperature of 16.9 °C, and a maximum photosynthetic photon flux density of 2000 μmol·m−2·s−1. The experiment was a randomized block design with five replications. There were 30 plants in each block, 10 plants per cultivar. Fresh and dry flower yields were evaluated in the third, fourth, and fifth years after grafting. Fresh and dry weights of 1000 flowers and CGA contents of the fifth-year plants were determined, and dry flower yields per hectare were calculated. Data were analyzed by analysis of variance (SAS GLM; SAS Institute, Cary, NC), and means separations were performed using Fisher’s protected least significant difference at P ≤ 0.05.

Results showed that all plants flowered in the third year. The fresh flower weights per plant of ‘Huayao-Wanshou’ increased from 7.27 kg in the third year to 10.5 kg in the fifth year, and the corresponding dry weights increased from 1.74 kg to 2.52 kg (Table 1). There were no significant differences in flower yield between ‘Huayao-Wanshou’ and ‘Jincuilei’, but the dry flower yield of the two cultivars was more than 2-fold higher than the parental plant. Fresh and dry weights of 1000 flowers of the 5-year-old plants were not significantly different between ‘Huayao-Wanshou’ and its parental plants but significantly lower than ‘Jincuilei’ (Table 2). The ratios of dry flower vs. fresh flower weight were similar among the three cultivars (Table 2). The CGA content of ‘Huayao-Wanshou’ was 8.86%, which was significantly higher than ‘Jincuilei’ and almost double the 4.62% of the parent plants (Table 2). A hectare of ‘Huayao-Wanshou’ in the fifth year could produce ≈5670 kg of dry flowers annually compared with 5423 of ‘Jincuilei’ and 2205 kg of the parental plants. The higher yield of ‘Huayao-Wanshou’ is largely attributed to more flower clusters per branch, although ‘Huayao-Wanshou’ has smaller flowers and lower weight per 1000 flowers compared with ‘Jincuilei’. Thus, this new mutant cultivar not only has a higher yield, but also a higher CGA content. The release of this cultivar in commercial production should provide the herbal medicine market more flos lonicerae. Additionally, its late maturation alters the time of flower harvest, alleviating growers’ pressure previously in harvesting all the cultivars at the same time.

Fresh and dry flower yields of mutant cultivars Huayao-Wanshou and Jincuilei as well as their parental plants Lonicera macranthoides in their third, fourth, and fifth years of a field trial.

Fresh and dry weights of 1000 flowers, dry-to-fresh-weight ratio, chlorogenic acid content, and dry flower yield of mutant cultivars Huayao-Wanshou and Jincuilei as well as their parental plants Lonicera macranthoides in their fifth years of a field trial.

Limited numbers of rooted cuttings of Lonicera ‘Huayao-Wanshou’ are available for research purposes, which can be obtained from Xiaoming Wang, the Hunan Key Laboratory for Breeding of Clonally Propagated Forest Trees. 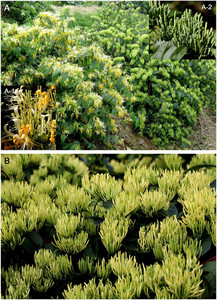