The Agricultural Research Service of the U.S. Department of Agriculture and the College of Agriculture and Life Sciences of Texas A&M University announce the release of the high-yielding, orange-fruited, Habanero-type, F1 hybrid pepper (Capsicum chinense Jacq.) cultivar CaroTex-312. Open-pollinated cultivars of Habanero peppers are used extensively by U.S. growers and these cultivars have historically suffered from several deficiencies, including low yields, late maturity, disease and pest susceptibility, and lack of uniformity. Transition to F1 hybrid cultivars for C. annuum pepper types such as jalapeño, bell, and ancho has led to greatly increased yields, earlier maturity, and superior fruit quality. Heterosis has been exploited in these C. annuum types and should also be a beneficial trait in C. chinense cultivars to maximize performance and quality (Butcher et al., 2012). The release of ‘CaroTex-312’ will provide pepper growers currently growing open-pollinated Habanero-type cultivars access to a high-yielding, F1 hybrid cultivar.

‘CaroTex-312’ is the result of an F1 cross made at Charleston, SC, between ‘TigerPaw-NR’ and UV88-2004. ‘TigerPaw-NR’ is a high-yielding, orange-fruited, extremely pungent, open-pollinated cultivar released by the U.S. Department of Agriculture (USDA) on 9 Jan. 2006 (Fery and Thies, 2007). ‘TigerPaw-NR’ is homozygous for a single dominant gene that conditions a high level of resistance to the southern root-knot nematode [Meloidogyne incognita (Chitwood) Kofoid and White]. UV88-2004 is an advanced, Habanero-type breeding line developed by Texas A&M University. It is a pungent, orange-fruited, open-pollinated line that exhibits resistance to Tomato spotted wilt virus (TSVW) and Pepper mottle virus (PepMoV). It is homozygous for the Tsw gene that conditions resistance to some strains of TSWV (Black et al., 1996). ‘CaroTex-312’ was evaluated under the experimental designation PX-312 in replicated and/or observational plantings at Charleston, SC, and College Station, TX.

‘CaroTex-312’ has a compact plant habit and produces campanulate-shaped (lantern-shaped), orange-colored fruit (Fig. 1). The period from transplanting to first harvest of mature fruit is 76 to 85 d at Charleston, SC, and College Station, TX. There are typically two pedicels per axil and the pedicel position at anthesis is pendant. Flower petal color is white; the stamens have white filaments and purple anthers. At full anthesis, the length of the style is slightly greater than the length of the stamen. The leaves are large, lanceolate-shaped, and have an intermediate green color. Pubescence is absent from both stems and the top of the leaves; there is sparse pubescence on the bottom of the leaves. Fruit-bearing plants do not exhibit noticeable anthocyanin pigmentation on the stems, branches, petioles, or pedicels. The fruits are attached to the pedicel in a pendant manner (typically two fruit per cluster); the calyx is saucer-shaped (flat, does not envelop the fruit base); the calyx margin shape is intermediate between smooth and dentate; the annular constriction at the junction of the calyx and peduncle is absent; and the pedicels are long, curved, and slender. The fruits are non-deciduous, i.e., the pedicel and calyx usually remain on the fruit at harvest. The seed color is yellow, and seed size is typical for a Habanero-type pepper (5.1 g per 1000 seeds). 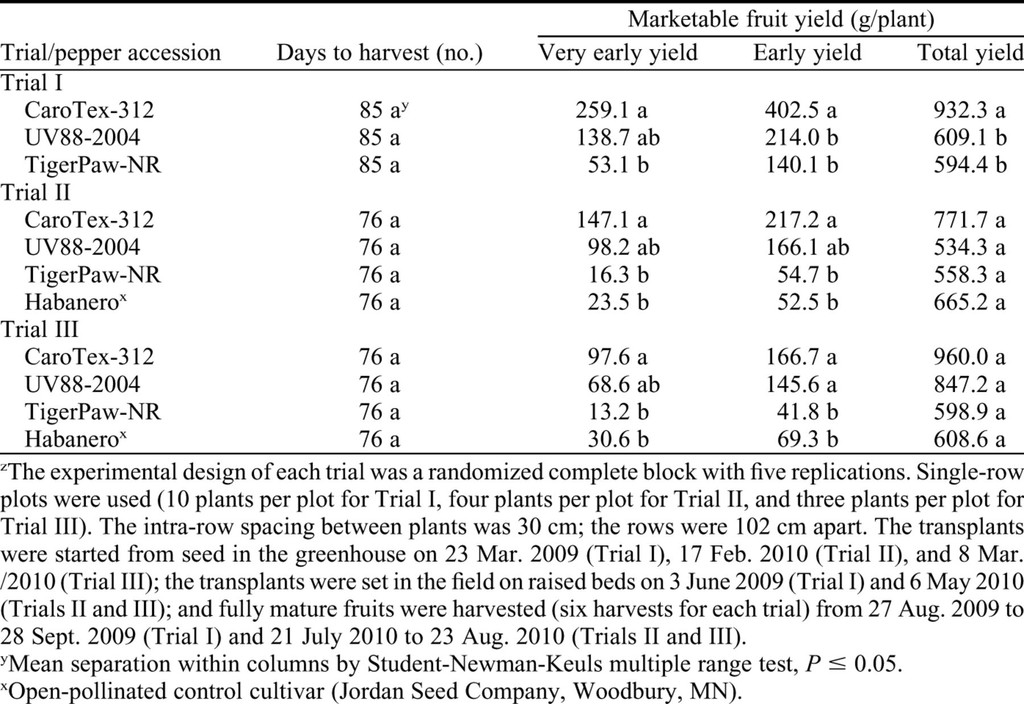 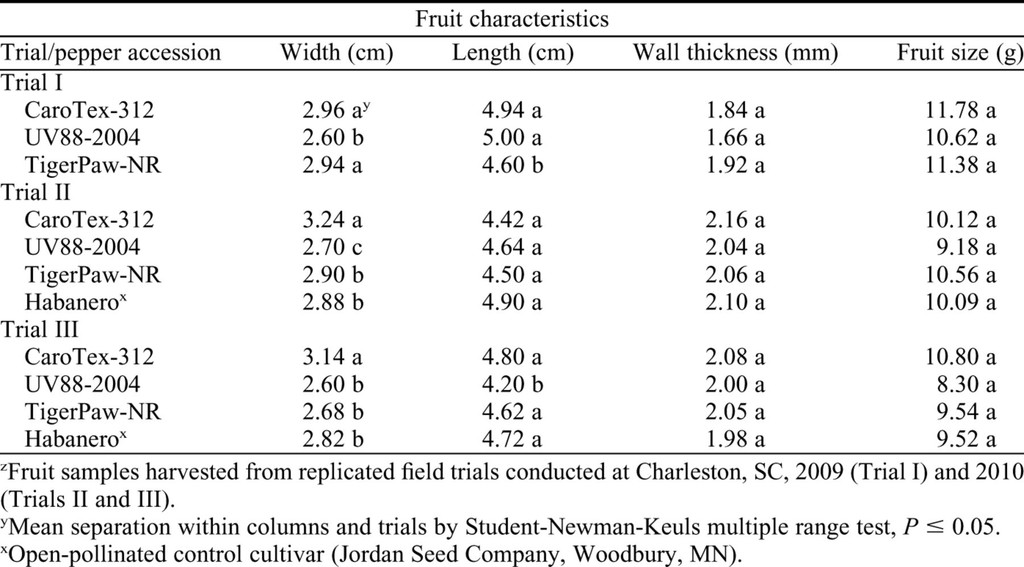 Observations of a number of ‘CaroTex-312’ plantings in Texas and the results of prior research with the parental lines used to develop ‘CaroTex-312’ suggest that the new cultivar has several potentially useful disease resistance attributes. In greenhouse and field screenings at College Station, TX, no differences in TSWV resistance were observed between ‘CaroTex-312’ and the TSWV-resistant UV88-2004 parent. No TSWV-infected plants were found in either the field (30 plants each) or the greenhouse (eight plants each). In the same trials, TSWV infection in susceptible ‘Orange Habanero’ and several breeding lines not carrying the Tsw gene ranged from 30% to 80%. In two field evaluations (2009–10) at Uvalde, TX, both ‘CaroTex-312’ and the PepMoV-resistant UV88-2004 parent exhibited resistance to PepMoV. Severe infection by PepMoV was observed in all 20 plants of susceptible checks ‘Orange Habanero’ and ‘TAM Mild Habanero’ in both trials. Additionally, ‘CaroTex-312’ is heterozygous for a dominant gene conditioning resistance to the southern root-knot nematode; the expression of the root-knot nematode resistance trait in ‘CaroTex-312’ is not expected to differ from the level of resistance exhibited by the resistant ‘TigerPaw-NR’ parent.

‘CaroTex-312’ is recommended for trial by fresh market growers throughout the southern United States. The new cultivar produces large, attractive, orange-colored fruit that should appeal to most consumers of Habanero-type peppers. Additionally, the yield attributes of ‘CaroTex-312’, particularly its potential for producing high early yields, should be especially appealing to growers trying to widen their marketing window. 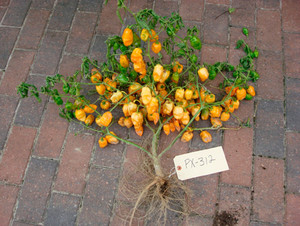 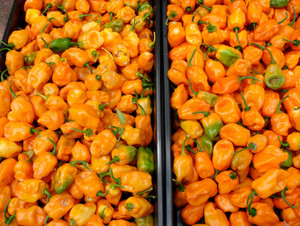