There is strong consumer interest in native plants for landscaping [Garden Writers Association Survey (2010), 2011]. Landscape architects and master gardeners would like to use more native plants but have found that a broad palette of native plants is not readily available from growers (Brzuszek et al., 2007, 2010). Although some native plants are produced in large quantities by the nursery industry and are widely used in landscaping, growers must expand their product lines by adding new species to capitalize on the native plant market.

Four ornamental and adaptable northeastern U.S. native shrub species that are relatively unknown in the horticultural trade are Ceanothus americanus (L.), Corylus cornuta (Marsh.), Lonicera canadensis (Bartr.), and Viburnum acerifolium (L.). These native shrubs have the potential to become revenue-generating crops for the nursery industry if successful propagation protocols are developed. For example, Amelanchier laevis (alleghany serviceberry) is currently a popular native ornamental for landscaping, but this species was less well known in the early 1990s (M. Brand, personal communication). Production of this plant by the nursery industry was facilitated by development of reliable propagation protocols by Still and Zanon (1991).

Vegetative propagation is often desired over sexual propagation for commercial nursery production because it generates more uniform plants (Hartmann et al., 2002), which are useful to a wider range of landscape applications. Deciduous shrubs, like the four native species identified, are generally propagated using softwood stem cuttings taken sometime during spring to summer. However, research has shown that for some species, softwood cutting success is improved when cuttings are taken at more specific times within this broad seasonal range (Dehgan et al., 1989; Dirr and Heuser, 1987; Pijut and Moore, 2002; Schrader and Graves, 2000). Therefore, this study evaluated whether cutting timing impacts propagation success of the four identified native shrubs. In addition, the impacts of increasing concentration of rooting hormone and transplanting timing of rooted cuttings were evaluated.

On three dates in 2012, softwood stem material was collected from mature plants of C. americanus, C. cornuta, L. canadensis, and V. acerifolium. C. americanus was collected in Ashford, CT, on 14 June, 12 July, and 9 Aug. C. cornuta and V. acerifolium were collected in Willington, CT, on 10 June, 8 July, and 5 Aug. L. canadensis was collected in Petersham, MA, on 12 June, 10 July, and 7 Aug. Plant material was placed in plastic bags in a chilled ice chest for transport to the University of Connecticut Plant Science Research and Education Facility in Storrs, CT, where it was processed into cuttings 10 to 15 cm in length with two or three nodes, except for V. acerifolium cuttings, which had two nodes. Cuttings were wounded (1.5 cm × 2 mm) twice on opposite sides and dipped in talc-based, IBA rooting hormone at 3000 ppm [Hormodin® #2 (OHP Inc., Mainland, PA)] and inserted in 1.3-L plastic flats (6.4 cm × 12.7 cm × 16.5 cm) filled with medium composed of two parts Canadian sphagnum peatmoss (Fafard Inc., Agawam, MA), one part horticultural-grade vermiculite (Whittemore Co., Lawrence, MA), and one part horticultural-grade perlite (Whittemore Co.). Plant material was collected in early morning and all cuttings were stuck within 4 h of collection. An experimental unit consisted of a flat with 10 cuttings and there were seven flats (or replications) per cutting timing per species. Flats of cuttings were held on a polyhouse bench under intermittent mist that provided 10 s of mist every 6 min. A separate randomized complete block design was arranged for each species. Cutting flats from June and July were randomized on the mist bench once cutting flats from July were complete. Similarly, cutting flats from June, July, and August were randomized on the mist bench once cutting flats from August were complete. After 8 weeks, cuttings were harvested and experimental units were evaluated for percentages of rooted cuttings. Root count (the number of roots longer than 0.5 cm) and root length (the average of the three longest roots) for the rooted cuttings in an experimental unit were averaged to obtain a value for each unit.

Softwood stem material of C. cornuta and V. acerifolium was collected during the third week of July 2011 in Willington, CT. Methods for transporting plant material and preparing cuttings and the intermittent mist conditions were as described for the timing study. Twelve cutting flats (experimental units) were prepared for each species. After 8 weeks, half of the flats for each species, chosen at random, were harvested and rooted cuttings were transplanted to containers. Rooted V. acerifolium cuttings were potted in 160-mL square containers and rooted C. cornuta cuttings were potted in 307-mL square containers using a medium composed of four parts aged pine bark (Fafard Inc.), two parts Canadian sphagnum peatmoss (Fafard Inc.), and one part sand (particles 0.05 to 2 mm in diameter). The remaining six cutting flats for each species were removed from the mist bench and placed on a bench in a hoophouse, and the roots were undisturbed. Undisturbed flats and transplanted rooted cuttings were overwintered in a minimally heated (36 °F minimum heat) hoophouse and were allowed to break dormancy naturally in Spring 2012. During the third week of Apr. 2012 (39 weeks after sticking cuttings), at the first signs of budbreak and leaf emergence, undisturbed flats were harvested and rooted cuttings were transplanted as described previously. On 1 June 2012, viable plants were counted. Percent survival was calculated by dividing the number of viable plants by the total number of plants potted. Plant height (measured from soil surface to apex of foliage) and width (measured twice, at right angles, and averaged) were recorded for each plant on 31 July 2012. 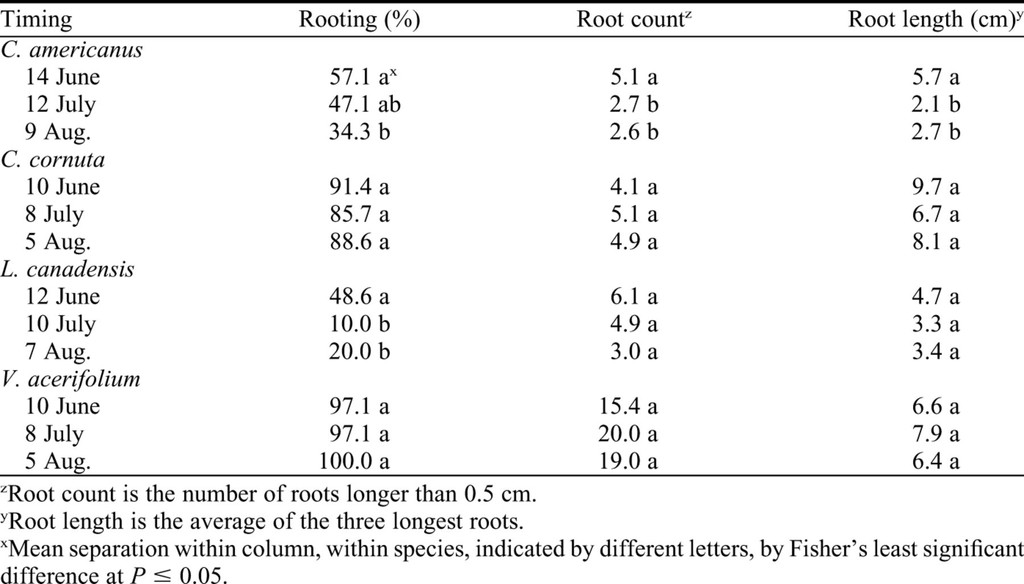 Rooting percentage, root count, and root length for softwood cuttings of Ceanothus americanus, Corylus cornuta, Lonicera canadensis, and Viburnum acerifolium propagated in July of 2011 and 2012 and treated with talc-based indole-3-butyric acid (IBA) at 0, 1000, 3000, or 8000 ppm. 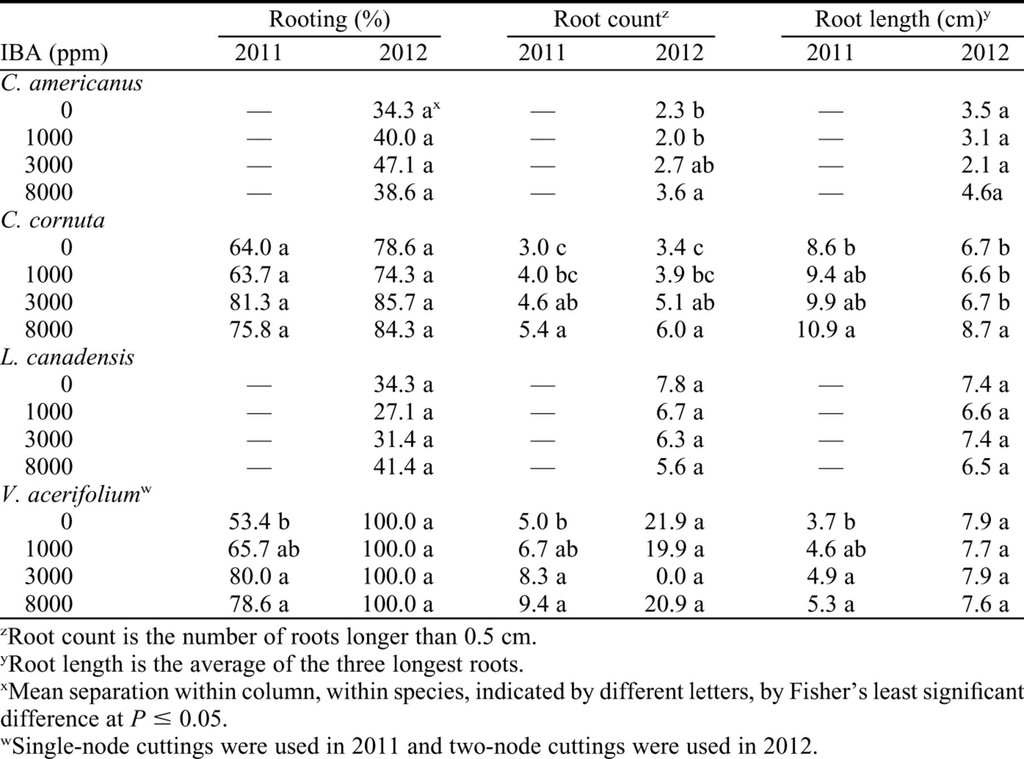 Percent survival and height and width of 1-year-old plants of Corylus cornuta and Viburnum acerifolium propagated from softwood cuttings and transplanted at 8 or 39 weeks after sticking cuttings.

Some growers have reported difficulty propagating V. acerifolium; however, we found it to be the easiest shrub to propagate of the four natives evaluated, and therefore it has the most obvious potential to be a mainstream nursery crop. Nearly 100% rooting can be achieved with V. acerifolium cuttings containing two nodes taken mid-June through mid-August (Tables 1 and 2). During the same time period, V. acerifolium may also be propagated at acceptable rooting rates for commercial production (65% to 80%) using single-node cuttings treated with 1000 ppm IBA (Table 2). Two-node cuttings of V. acerifolium may root better than single-node cuttings because they have greater reserves of carbohydrates and endogenous root morphogens and auxin (Hartmann et al., 2002; Smalley and Dirr, 1987). In this study, single-node cuttings were derived from reproductive shoots with flowers in bud. It has been suggested that flower induction can result in reduced formation of root promoting “cofactors” produced in leaves and translocated to the sites of adventitious root formation (Adams and Roberts, 1965). Although the flower buds were removed from V. acerifolium stems to make single-node cuttings, their initial presence may have impaired rooting of single-node cuttings.

C. cornuta can be propagated at 85% rooting or greater when cuttings are taken mid-June to mid-August and treated with 3000 ppm IBA (Tables 1 and 2). These results indicate that this species, in addition to V. acerifolium, has the potential to be a new nursery crop. In this study, 78% of the cuttings not treated with IBA rooted, and this percentage was not significantly different from hormone-treated cuttings (Table 2). However, untreated cuttings had fewer roots and root length than treated cuttings. Similar results were found for two species of native Rhamnus, alnifolia, and lanceolata, in which non-treated cuttings rooted at 75% but had fewer roots than those treated with talc-based IBA (Sharma and Graves, 2005).

Exogenous auxin did not appear to be necessary for rooting cuttings of C. americanus and L. canadensis; however, cutting timing significantly affected propagation success. Rooting was optimal at the earliest cutting date evaluated, which was June (Table 1). There was no statistical difference in rooting between C. americanus cuttings taken in June (57%) and July (47%), but June cuttings produced more and longer roots. Cuttings of both C. americanus and L. canadensis taken in June rooted at acceptable rates for specialty native plant nurseries. It may be possible to achieve greater percent rooting for these species if cuttings are taken earlier than mid-June. L. canadensis stems likely reach the proper degree of hardening for softwood cutting success earlier than the June cutting date because this species breaks bud early in spring, well before most other native shrub species. C. americanus does not leaf out particularly early in spring; however, this species may require very soft stem tissue to allow for adventitious rooting.

To optimize cutting survival, rooted cuttings of C. cornuta and V. acerifolium should be left in rooting containers for a period of cold dormancy before transplanting. Growers who overwinter their C. cornuta and V. acerifolium in the container in which they were rooted can expect close to 100% survival (Table 3). Fall transplanting will result in 50% attrition, reducing the potential for these species to be viable commercial nursery crops. Similar findings have been reported for several woody plant genera, including Acer, Hamamelis, Hydrangea, Fothergilla, Stewartia, and Viburnum (Dirr and Heuser, 1987).

Based on these findings, two of the four native species evaluated could be commercially viable nursery crops for general wholesale nurseries, and all four could be viable crops for specialty native plant nurseries provided there are no limitations to post-propagation container production. It is likely that with further research into optimizing propagation all four native species could be viable commercial nursery crops for general wholesale nurseries. This work demonstrates that novel native species are a potential source of new crops for the nursery industry.