Search for other papers by Daniel T. Lloyd in
ASHS
Google Scholar
PubMedClose

Zoysiagrass (Zoysia japonica Steud.) is a popular turfgrass species used in golf course fairways in Missouri and surrounding states (Lyman et al., 2007). Throughout this region, zoysiagrass enters dormancy typically in November and resumes growth in late March or early April (Dunn and Diesburg, 2004). Weed established in dormant zoysiagrass reduces the aesthetic value as well as the playability during winter and spring months. Various pre- and post-emergent herbicides can be effective for control of winter weeds on zoysiagrass turf (Harrell et al., 2005; Johnson, 1980; Vargas and Turgeon, 2004). However, the main strategy adopted by golf course superintendents in this region is winter application of the non-selective herbicide glyphosate (Velsor et al., 1989), which is an economical and effective tool for control of a broad spectrum of weeds.

One of the concerns with winter applications of glyphosate in dormant warm-season turf is possible/potential delay of spring green-up (Johnson, 1977; Johnson and Burns, 1985; Johnson and Ware, 1978). Besides variation in zoysiagrass species and environmental conditions (Rimi et al., 2012; Velsor et al., 1989), application timing is a critical factor influencing herbicide safety on zoysiagrass turf. A 2-year study conducted in Missouri found that glyphosate at 2.24 kg·ha−1 on ‘Meyer’ zoysiagrass (Z. japonica) applied on 1 Mar. had no impact on turf quality, but the same applications made on 1 Apr. caused significant injury in late April and May (Velsor et al., 1989). At both application dates, zoysiagrass turf was apparently dormant despite the presence of green tissue at the base of stems for 3 to 5 or 5 to 8 mm in length for March and April application dates, respectively (Velsor et al., 1989). This indicates that characterization of zoysiagrass as dormant is difficult, complicating identification of a safe window for application of non-selective herbicides. For golf course superintendents, applications closer to spring green-up are more desirable than earlier applications, because the limited residual activity of non-selective herbicides such as glyphosate allows continued emergence of winter annuals. Application before spring is more desirable also because there is limited demand for use of zoysiagrass turf in the winter months (Ryan Sears, personal communication). Therefore, it is critical to determine the proper timing window toward the end of winter for both effective weed control and optimum zoysiagrass safety.

Because winter application of non-selective herbicides for weed control on dormant warm-season turf is a common practice, alternative herbicides are desirable. Glufosinate, a non-selective, foliar-applied herbicide, can be used to control winter weeds in dormant bermudagrass turf (Tharp et al., 1999). Despite differences in toxicity for glyphosate (Carlson and Burnside, 1984) compared with glufosinate, most annual weed species, including barnyardgrass (Echinochloa crusgalli L.), fall panicum (Panicum dichotomiflorum L.), giant foxtail (Setaria faberi L.), and large crabgrass (Digitaria sanguinalis L.), responded similarly to glufosinate and glyphosate (Tharp et al., 1999). When applied on dormant bermudagrass turf, glufosinate at 1.68 kg·ha−1 controlled annual bluegrass up to 93%, which was similar to the efficacy of 0.56 kg·ha−1 glyphosate (Toler et al., 2007). Unlike glyphosate, which is translocated to the sink tissues including stolons and rhizomes in zoysiagrass, glufosinate is mainly directed to the apical-developing tissues (Grangeot et al., 2006). This characteristic could potentially improve the safety of glufosinate compared with glyphosate when applied to dormant zoysiagrass turf, especially when complete dormancy is difficult to determine.

Treatment effect on annual bluegrass and mouseear chickweed percent cover (%) evaluated at 3 and 5 weeks after initial treatment (WAIT) in 2010 at Columbia, MO.

At Columbia, separate field plots measuring 1.5 × 3.0 m were established on mature ‘Zenith’ zoysiagrass (Z. japonica) turf in 2010 and 2011 at the Turfgrass Research Center on the University South Farm. At Carbondale, treatments were applied to mature ‘Meyer’ zoysiagrass on plots measuring 1.8 × 1.8 m in 2010 at the Turfgrass Research Facility. All treatments were applied with a CO2 pressurized backpack sprayer calibrated to deliver 374 L·ha−1 at a spray pressure of 276 kPa using TeeJet XR8004 flat fan nozzles (Spraying Systems Co., Wheaton, IL). During this experiment, plot areas were not irrigated. Mowing was delayed until zoysiagrass started to green-up, and then the plots were maintained at 2- and 5-cm heights at Columbia and Carbondale, respectively. All sites were not fertilized during the experimental period until zoysiagrass turf reached complete green-up in mid- to late June.

Visual assessments of treatment effects included percent weed infestation and turf quality. Percent weed infestation for individual species and total weeds was evaluated using a 0% to 100% rating scale with 0 = no weeds and 100 = complete weed coverage. Percent weed cover for individual species, including annual bluegrass, mouseear chickweed (Cerastium vulgatum L.), dandelion (Taraxacum officinale L.), and white clover (Trifolium repens L.), was evaluated at 3 and 5 weeks after initial treatment (WAIT). To simplify the discussion, only results for annual bluegrass and mouseear chickweed are included in this report and discussed individually. Percent total weed cover was evaluated every other week throughout the experiment at all three sites. Percent total weed covers were calculated as the area under percent weed curve (AUPWC), which represents the cumulative effect of weed infestation and is calculated by the equation:

where Xi = percent weed coverage at the ith observation, ti = days after initial treatment at the ith observation, and n = number of total observations (Campbell and Madden, 1990). A lower AUPWC value indicates less weed infestation during the study period for a given herbicide treatment. Turf quality was evaluated on a 1 to 9 scale where 1 represented total dead or dormant turf, 9 was the ideal turf quality with 100% green canopy, and 6 indicated minimally acceptable turf quality. Evaluations were initiated at the time of treatment application and continued until 100% green-up in nontreated plots was reached.

Treatments were arranged in a randomized complete block design with four replications at all sites. Analysis of variance was conducted using the PROC MIXED program in SAS 9.2 (SAS Institute, Cary, NC). There was a significant treatment-by-study interaction for all parameters. Therefore, data are presented separately for each study. Mean separation was conducted using Fisher’s protected least significant difference at P = 0.05.

In 2011 at the Columbia site, annual bluegrass infestations in the nontreated control area were low with only 0.5% coverage observed in April (Table 2). The infestation of annual bluegrass in treated plots remained statistically similar compared with the nontreated control, except for glufosinate at 1.68 kg·ha−1 applied on 7 Apr. Complete expression of glufosinate activity requires 10 to 14 d (Grangeot et al., 2006), and the evaluation made at 3 WAIT occurred only 6 d after application. Therefore, the relatively higher (3.5%) annual bluegrass cover in the plots treated with glufosinate at 1.68 kg·ha−1 may have been influenced by the short duration between application and evaluation. By 5 WAIT, annual bluegrass cover in these plots had declined by 57%, and no statistical differences were found among treatments (Table 2). Similarly, low mouseear chickweed cover was found in nontreated plots, and herbicides did not significantly reduce weed cover by 3 WAIT. Like in 2010, glyphosate resulted in statistically similar or lower efficacy than glufosinate for management of mouseear chickweed (Table 2).

Treatment effect on annual bluegrass and mouseear chickweed percent cover (%) evaluated at 3 and 5 week after initial treatment (WAIT) in 2011 at Columbia, MO.

Treatment effect on annual bluegrass and mouseear chickweed percent cover (%) evaluated at 3 and 5 week after initial treatment (WAIT) in 2010 at Carbondale, IL.

The time period for zoysiagrass to initiate new growth and reach full green-up was ≈4 weeks at all sites (Figs. 1 to 3). In each situation, a short lag phase in turf quality was followed by an exponential increase. Although there did not appear to be an influence of glyphosate or glufosinate on the initiation of green-up, application timing did impact the overall turf quality in spring months.

In 2010, zoysiagrass in Columbia started to break dormancy in early April and reached 100% green coverage, indicated by the turf quality rating of 9, by early May (Fig. 1). From mid-April until the beginning of May, chemical applications at the early timing (16 Mar.) appeared to reduce zoysiagrass turf quality by 10% to 21%. However, applications on 29 Mar. had a more pronounced influence, reducing turf quality by 15% to 33%. The reduction in turf quality was transient, and no differences were measured by mid-May.

The pattern of zoysiagrass turf quality changes was similar in 2011 compared with 2010, but initiation of turf growth occurred over a longer period of time (Fig. 2). For the 18 Mar. herbicide applications, reductions in zoysiagrass turf quality were small, ranging from 0% to 20% over the course of the experiment. However, between 14 Apr. and 29 May, turf quality was significantly reduced by the later application (7 Apr.) of glyphosate (2% to 37%) and the higher rate of glufosinate (11% to 25%). The soil temperature at a 10-cm depth was 10.0 °C on 7 Apr. at the second timing. According to Beard (1973), zoysiagrass resumes growth when soil temperatures reached 10 °C. Although zoysiagrass appeared to be dormant on 7 Apr., some level of metabolic activity (Velsor et al., 1989) may have resulted in limited herbicide activity. By late May, zoysiagrass approached full recovery and no treatment effect was detected.

At the Carbondale location, zoysiagrass resumed growth over a longer time period than the Columbia experiments in May 2010 (Fig. 3). Herbicide application timing significantly impacted zoysiagrass turf quality during green-up. None of the applications at the earlier timing (5 Mar.) delayed zoysiagrass development. Our results agree with Toler et al. (2007) who reported that neither glufosinate at 1.68 kg·ha−1 nor glyphosate at 0.56 kg·ha−1 delayed bermudagrass spring green-up when applications were made at soil temperatures below 10 °C. However, for applications at the later timing (20 Mar.), turf green-up was delayed and therefore turf quality was reduced up to 39% (Fig. 3). Glyphosate appeared more influential than glufosinate and reduced zoysiagrass turf quality by 18% to 39% compared with the nontreated control. In comparison, glufosinate applied at the 20 Mar. timing reduced zoysiagrass turf quality by 4% to 28% regardless of rate. Soil temperatures on 20 Mar. were 8.9 °C, close to the temperature (10 °C) reported to trigger spring green-up (Beard, 1973). It was likely that despite the apparently dormant appearance, the zoysiagrass plants were metabolically active at this stage and were therefore more vulnerable to herbicides applied (Velsor et al., 1989).

Zoysiagrass turf quality influenced by winter application of glufosinate at 0.84 or 1.68 kg·ha−1 (designated as “low” or “high,” respectively), glyphosate at 0.56 kg·ha−1, and a nontreated control. Applications were made at two dates, 16 and 29 Mar. 2010 (designated as “early” or “late,” respectively), at Columbia, MO. Turf quality was assessed on a 1 to 9 scale during the spring green-up, where 1 represents total dead or dormant turf, 9 is the ideal turf quality with 100% green canopy, and 6 indicates the minimally acceptable turf quality. The vertical bar indicates Fisher’s Protected least significant difference (lsd) at P = 0.05 for comparisons of significant differences between treatments at a given evaluation date.

Zoysiagrass turf quality influenced by winter application of glufosinate at 0.84 or 1.68 kg·ha−1 (designated as “low” or “high,” respectively), glyphosate at 0.56 kg·ha−1, and a nontreated control. Applications were made at two dates, 18 Mar. and 7 Apr. 2011 (designated as “early” or “late,” respectively), at Columbia, MO. Turf quality was assessed on a 1 to 9 scale during the spring green-up, where 1 represents total dead or dormant turf, 9 is the ideal turf quality with 100% green canopy, and 6 indicates the minimally acceptable turf quality. The vertical bar indicates Fisher’s protected least significant difference (lsd) at P = 0.05 for comparisons of significant differences between treatments at a given evaluation date.

Zoysiagrass turf quality influenced by winter application of glufosinate at 0.84 or 1.68 kg·ha−1 (designated as “low” or “high,” respectively), glyphosate at 0.56 kg·ha−1, and a nontreated control. Applications were made at two dates, 5 and 20 Mar. 2010 (designated as “early” or “late,” respectively), at Carbondale, IL. Turf quality was assessed on a 1 to 9 scale during the spring green-up, where 1 represents total dead or dormant turf, 9 is the ideal turf quality with 100% green canopy, and 6 indicates the minimally acceptable turf quality. The vertical bar indicates Fisher’s protected least significant difference (lsd) at P = 0.05 for comparisons of significant differences between treatments at a given evaluation date. 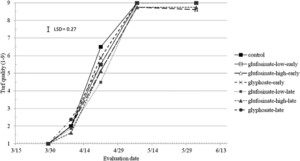 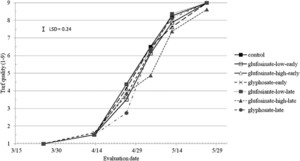 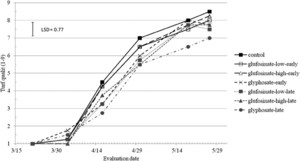