The greenhouse floriculture crop production industry compromises such commodities as flowering potted crops, perennials, and annual bedding plants. This sector of the horticulture production industry was valued at $3.83 billion for the top 15 producing states in 2009 (USDA, 2010). Most greenhouse floriculture crops are grown in containers. The container size is dictated by the length of time the crop will be in production and the desired finished plant size. For example, florist potted crops such as poinsettia (Euphorbia pulcherrima L.) and chrysanthemum (Chrysanthemum ×morifolium Ramat) require longer production times to grow and are typically grown in larger containers than annual bedding plants.

Petroleum-based plastics (plastic) are the most common materials used to fabricate containers for greenhouse crop production. Plastic is relatively strong, resists mildew and algae growth, and can be molded into a variety of shapes and sizes. However, after use, these containers are typically discarded, and this results in large amounts of waste plastic containers going to landfills. One potential solution to the large amounts of waste plastic greenhouse containers is the use of biocontainers. Biocontainers are generally defined as containers that are not petroleum-based and break down quickly when planted into the soil or placed into a compost pile.

Most of the research conducted on the physical properties of biocontainers has been focused on short-term crops such as annual bedding plants grown using overhead irrigation systems. However, many greenhouse crops are grown as potted florist crops that require longer production times than bedding plants and are often grown in larger containers using subirrigation systems such as ebb-and-flood benches or flood floors. Therefore, the objective of this research was to evaluate the physical properties of biodegradable containers compared with plastic containers for the production of long-term crops using a subirrigation system.

Heights, diameters, and volumes of plastic and various biocontainers used.

Eight-leaf plugs (number 50 plug trays with volume of 30.8 mL; Wagner Greenhouses, Minneapolis, MN) of ‘Rainier Purple’ cyclamen (Cyclamen persicum L.) were transplanted into the containers described previously filled to the container rim with a 75:25 peat:perlite root substrate (Sun Gro Horticulture, Bellevue, WA). Cyclamen was chosen for this study because it was a long-term greenhouse crop and a day-neutral plant. All containers were placed in a glass-glazed greenhouse in Fayetteville, AR, on 1 m × 1 m × 15-cm ebb-and-flood benches. Greenhouse air temperatures ranged from 18 to 32 °C and light levels ranged from 350 to 440 μmol·m−2·s−1 at 1200 hr during the experimental periods. The experiment was conducted Feb. to June 2010, Sept. 2010 to Jan. 2011, and Feb. to June 2011. For each block, one type of container was randomly assigned to a bench.

All containers were irrigated by flooding benches to a depth of 2 cm for 10 min with a solution containing 100 mg·L−1 nitrogen using a 15N–4.3P–20.8K water-soluble fertilizer (Peters Professional 15-10-25 Poinsettia Peat-Lite; Scotts, Marysville, OH). Each bench contained nine of a single type of container. Benches were irrigated individually when the moisture level of three of the containers within a bench decreased below 40% (v/v) using a Waterscout SM100 Moisture Sensor on the soilless setting at 21 °C (Spectrum Technologies, Plainfield, IL). The moisture level of each container was checked four times per day.

Tensile strength of new or used containers was tested by suspending the containers 12 cm above a catch basin. The containers were leveled and increasing amounts of weight using 4.5-mm diameter steel balls (354 mg each) were added until the container walls separated or the container bottoms broke. The maximum test weight for this test was 10 kg.

The experimental design was a complete randomized block design with an ebb-and-flood bench serving as an experimental unit. The experiment was repeated three times. An analysis of variance and single-degree-of-freedom contrasts were conducted to determine if significant differences occurred between the plastic container and each of the biocontainers.

A used strength of 15 N was proposed by the authors to be the minimum limit for handling and transporting containers without tearing based on handling of the wet containers. The peat, dairy manure, wood fiber, and rice straw containers had used punch strengths below 15 N for one or more zones. Therefore, handling, packaging, and shipping of these containers when used for the production of long-term crops using subirrigation systems could be problematic.

Overall, the bioplastic, solid rice hull, slotted ricehull, paper, and coconut fiber biocontainers had properties that allowed them to be suitable alternative to traditional plastic containers when used to grow long-term greenhouse crops on subirrigation systems. These containers retained high levels of punch and tensile strength, had little or no algal and fungal growth, and required similar amounts of fertilizer solution to grow the crop. The peat, dairy manure, wood fiber, and rice straw containers would not be appropriate substitutes for plastic containers in long-term ebb-and-flood irrigation systems because of the low used strengths, high percentages of algae coverage, and shorter irrigation intervals.

Punch strength by zone of new 15.2-cm plastic containers and various biocontainers. Lower zone for all containers was 0 to 2 cm high. Middle and upper zones were determined by taking the remaining height of the container and dividing it in half creating two zones of equal height. ns, *, **, *** Nonsignificant or significantly different from the plastic control at P > F = 0.05, 0.01, or 0.001, respectively.

Punch strength by zone of 15.2-cm plastic containers and various biocontainers after being used to grow ‘Rainier Purple’ cyclamen for 15 weeks in an ebb-and-flood system. The bottom zone for all containers was 0 to 2 cm from the bottom of the container and middle and upper zones were determined by taking the remaining height of the container wall and dividing it in half creating two zones of equal height. Bars noted with *** are significantly different from the plastic control at P > F = 0.001.

Tensile strength of new and wet used 15.2-cm plastic containers and various types of biocontainers. Used containers were tested after growing ‘Rainier Purple’ cyclamen for 15 weeks in an ebb-and-flood system. The maximum test weight was 10 kg and containers receiving 10 kg in the figure exceeded the test limit and did not break. Peat and manure containers were already broken after 15 weeks and assigned a strength of zero. ns, *** Nonsignificant or significantly different from the plastic control at P > F = 0.001.

Total fertilizer solution required to grow a ‘Rainier Purple’ cyclamen in 15.2-cm plastic containers or various biocontainers in an ebb-and-flood system. ns, * Nonsignificant or significantly different from the plastic control at P > F = 0.05.

The average container, substrate and plant fertilizer solution absorption of 15.2-cm plastic containers and biocontainers in an ebb-and-flood system when used to grow ‘Rainier Purple’ cyclamen. ns, *, **, *** Nonsignificant or significantly different from the plastic control at P > F = 0.05, 0.01, or 0.001, respectively, as compared with plastic.

Algal and fungal growth on container outer wall as a percentage of the entire outer container surface after being used to grow ‘Rainier Purple’ cyclamen for 15 weeks in an ebb-and-flood system. ns, *** Nonsignificant or significantly different from the plastic control at P > F = 0.001.

Algal and fungal growth on container outer wall by zone as a percentage of the total area of that zone after being used to grow ‘Rainier Purple’ cyclamen for 15 weeks in an ebb-and-flood system. Bottom zone for all containers was 0 to 2 cm high. Middle and upper zones were determined by taking the remaining height of the container and dividing it in half creating two zones of equal height. ns, **, *** Nonsignificant or significantly different from the plastic control at P > F = 0.01 or 0.001, respectively. 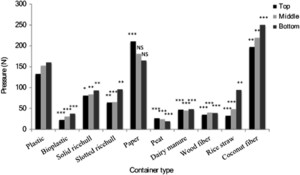 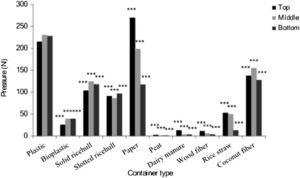 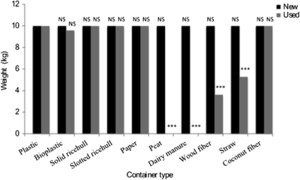 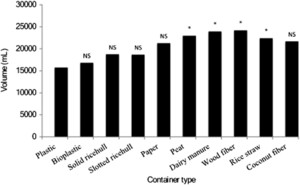 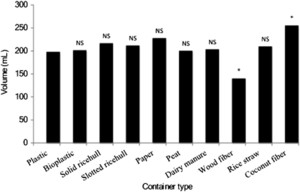 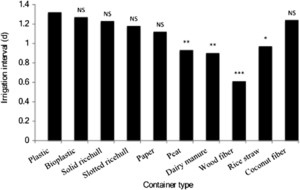 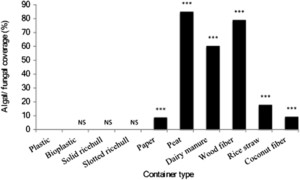 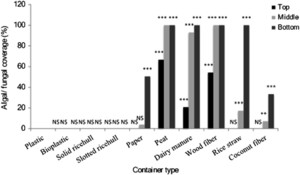