Score of the intensity of red pigmentation in equatorial cross sections of red-fleshed Actinidia chinensis fruit.

Boxplots of vine means during 2006–08 for fruit flesh firmness, soluble solids content, and dry matter content of diploid Actinidia chinensis ‘Hort16A’ and the autotetraploids induced from it by colchicine. In box plots, the upper and lower edges of the box represent the 75th and 25th percentiles, respectively, and the median is represented by the bold horizontal line. The whiskers extend to 1.5 times the interquartile range (i.e., the distance between the 25th and 75th percentiles) or the minimum or maximum, whichever is more extreme. Any observations beyond the whiskers are shown by the plot symbol and are considered as outliers. 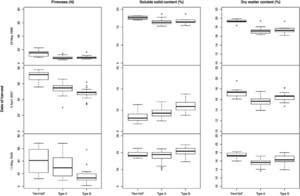 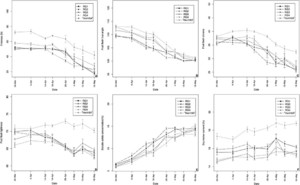