Cultivated gerbera (Gerbera hybrida, Asteraceae Dumont) is one of the most important floricultural crops in the United States and worldwide (Behnke, 1984; Rogers and Tjia, 1990). It is well accepted in the cut flower and potted plant markets and can also be grown as a patio, garden, or landscape plant. Gerbera breeding over the past several decades has been focused primarily on developing cultivars for cut flower production or for small flowering pot plants to be used in flower beds (Behnke, 1984; Rogers and Tjia, 1990). Cut flower cultivars require gerbera flowers with long peduncles (greater than 50 cm). The majority of the pot gerbera cultivars have been developed for production in 15-cm-diameter or smaller containers; thus, these cultivars produce compact plants and flowers with short peduncles (less than 30 cm) (Dole and Wilkins, 1999). Recently, interest in producing gerberas in large (20-cm-diamter or larger) containers for indoor or outdoor use has increased [O. Nissen (Sunshine Carnations State, Inc.) and J. Mazat (Ball Horticultural Company), personal communication]. There has been a severe shortage of cultivars suitable for such uses (Channel, 2005). Greenhouse growers and nurseries often rely on two strategies to produce gerberas for this emerging market. One method uses cut flower cultivars and growth retardants to shorten the flower peduncles. However, finished plants often have few flowers and peduncles are still too tall for the pot size. Other growers have tried to use small cultivars, but finished gerbera plants tend to be too small and do not satisfactorily fill up the containers.

Previously we developed and released six gerbera cultivars for use in large containers (Deng and Harbaugh, 2010). These cultivars are marketed under the FuntasticTM series (Ball Horticultural Company) and have displayed exceptional heat tolerance in industry and/or university trials (Siktberg, 2012). Some of these cultivars were selected as “Best of the Best” in the University of Georgia garden trials (<http://ugatrial.hort.uga.edu/index.cfm>) and as top performers in the Ohio State University garden trials (Anonymous, 2011). The current series consists of five flower colors (white, light pink, yellow, orange, and orange–red). Additional cultivars are needed to expand the plant palette in this series. Like in other flower crops, continuous introduction of new cultivars with improved or novel horticultural characteristics may serve as a driving force for commercial production and consumer consumption (Behnke, 1984; Rogers and Tjia, 1990).

UFGE 7031 and UFGE 7080 were selected and tested specifically for the large-container flower market. These cultivars produce large plants with large attractive flowers and appropriate peduncle heights for use in larger containers. These gerberas also express moderate to high levels of resistance to powdery mildew, the most common and important disease in gerbera production and gardening (Chase, 2001; Moyer and Peres, 2008).

UFGE 7031 resulted from a cross between selections UFGE 5004 and UFGE 5015 (Fig. 1) and was initially selected in late 2007 for its powdery mildew resistance, attractive flower color, and large flower size. UFGE 5004 was an offspring of breeding lines UFGE 31-19 and UFGE 5-23 that were crossed in 2004 and was selected in 2005. UFGE 5015 was a progeny of the cross between commercial cultivar Sunburst Fuchsia (non-patented) and breeding line UFGE 3714 and was selected in 2005.

UFGE 5-23, UFGE 31-19, and UFGE 3714 were selected out of ≈2000 progeny from the seeds donated by Sunshine State Carnations, Inc. (Hobe Sound, FL). UFGE 5-23 and UFGE 31-19 were selected for their moderate or high level of resistance to powdery mildew resistance, respectively (Z. Deng, unpublished data).

Mature plants of UFGE 7031 were 50 cm tall and 60 cm wide (Table 1; Fig. 2). Leaves were simple and pinnately lobed, with deep lobes in the basal third and shallow lobes from the central third up to the top third. The upper and lower leaf surfaces were medium green, RHS 147A and RHS 147B, respectively. Flowers (Table 1; Fig. 3) are of the single type and have a diameter of 11.1 to 13.7 cm. The upper and lower sides of the outer ray florets were orange–red (RHS 30B) and yellow–orange (RHS 32C/D), respectively. Disc florets were orange–red (RHS 33A). Peduncles were 36 to 45 cm in height.

Summary of major plant and flower characteristics of UFGE 7031 and UFGE 7080 based on Expts. 1 to 3.

Mature plants of UFGE 7080 were 53 cm tall and 65 cm wide (Table 1; Fig. 4). Leaves were simple and pinnately lobed, with deep lobes in the basal third, shallow lobes in the central third, and no obvious lobes near the top third. The upper leaf surface was medium green (RHS 146A). Flowers (Table 1; Fig. 5) are single and have a diameter of 11.1 to 11.9 cm. The upper side of the outer ray florets was bicolored, yellow (RHS 9A) near the base and transitioning to orange (RHS 25A) toward the apex. The lower surface was yellow (RHS 12B). Disc florets were orange (RHS 28B). Peduncles of mature flowers were 43 to 52 cm in height.

Three experiments (Expts. 1 to 3) were conducted in the greenhouse to evaluate horticultural characteristics, including plant quality, days to flower, flower size, flower quality, peduncle length, and flower count. In Expt. 1, tissue culture liners (Agri-Starts, Apopka, FL) were transplanted on 9 Dec. 2008 into 20-cm-diameter containers filled with commercial potting mix Fafard 3B (Conrad Fafard, Inc., Agawam, MA) amended with the controlled-release fertilizer Osmocote (15N–3.9P–10K, 5 to 6 months; Scotts Co., Marysville, OH) at 5.28 kg·m−3 and the trace element fertilizer MicroMax (Scotts Co.) at 1.05 kg·m−3. Potted plants were grown on metal benches at ≈46 cm spacing between pots in a greenhouse in Wimauma, FL. Irrigation was through drip tubes. Temperatures inside the greenhouse ranged from 18 °C (night) to 33 °C (day). Two additional hours of incandescent photoperiodic lighting were provided between 9 Dec. 2008 and 17 Mar. 2009. Fungicides and insecticides were applied as needed to control powdery mildew (Podosphaera fusca) (Moyer and Peres, 2008) and western flower thrips (Frankliniella occidentalis) (Price et al., 2003). The number of flowers produced per potted plant was recorded weekly from 20 Jan. 2009 through 17 Mar. 2009. The number of days from transplanting to the opening of the third flower was recorded as the production time needed to produce marketable potted flowering plants. Flower quality was rated on a 1 to 5 scale: 1 = very poor; 3 = fair, some blemishes, but acceptable; and 5 = excellent, bright, uniform, and no blemishes. Plant quality was rated on 17 Feb. 2009 using a 1 to 5 scale: 1 = few leaves or long petioles, container surface visible, very poor and unacceptable as flowering potted plants; 3 = fair and marketable; and 5 = excellent, full, symmetrical, attractive flowering plants.

Expt. 2 was conducted in Aug. through Nov. 2009. Gerbera tissue culture liners were transplanted on 13 Aug. 2009 into 20-cm-diameter plastic containers filled with Fafard 3B potting mix (Conrad Fafard) amended as Expt. 1. Potted plants were grown as described in Expt. 1. The greenhouse was covered with aluminum shading cloth (Aluminet®; Signature Supplies, Inc., Lakeland, FL) with ≈30% light exclusion. Temperatures in the greenhouse were between 21 °C (night) and 35 °C (day). Additional photoperiodic lighting (incandescent, ≈5 μmol·m−2·s−1, 2 h) began on 15 Sept. 2009. The number of new flowers produced per plant was recorded weekly from 25 Sept. 2009 through 20 Nov. 2009. Flower and plant quality were rated as Expt. 1.

Expt. 3 was conducted in Apr. through Aug. 2012. Tissue culture liners (Agri-Starts) were transplanted on 4 Apr. 2012 into 20-cm-diameter plastic containers filled with amended Fafard 3B potting mix. Growing conditions were similar to those described for Expt. 2. The number of flowers produced per potted plant was recorded weekly from 12 June through 31 July 2012. Flower and plant quality were rated as in Expt. 1.

Two types of commercial cultivars were included for comparison. The first were cut flower cultivars that were used to produce gerberas in large containers (Sunshine States Carnations, Inc., Hobe Sound, FL), including ‘Bimini’ and ‘Pensacola’. ‘Funtastic™ Fire Orange’ (UFGE 4141) or ‘Funtastic™ Canary’ (UFGE 7032) were also used as checks because these cultivars were developed and recently released for use in large containers (Deng and Harbaugh, 2010). The experimental design was a randomized complete block design with five (Expt. 1), eight (Expt. 2), or six (Expt. 3) replications. The experimental unit was a single containerized plant grown from one tissue culture liner. Experimental data were analyzed using PROC GLM in the SAS software (SAS Inst., Cary, NC) and mean separation was done using the least significant difference (lsd) at P = 0.05.

Horticultural characteristics of UF 7031 and UFGE 7080 in comparison with ‘Bimini’, ‘Pensacola’, ‘Funtastic™ Fire Orange’, and/or ‘Funtastic™ Canary’ in three experiments conducted in Wimauma, FL (2009 and 2012). 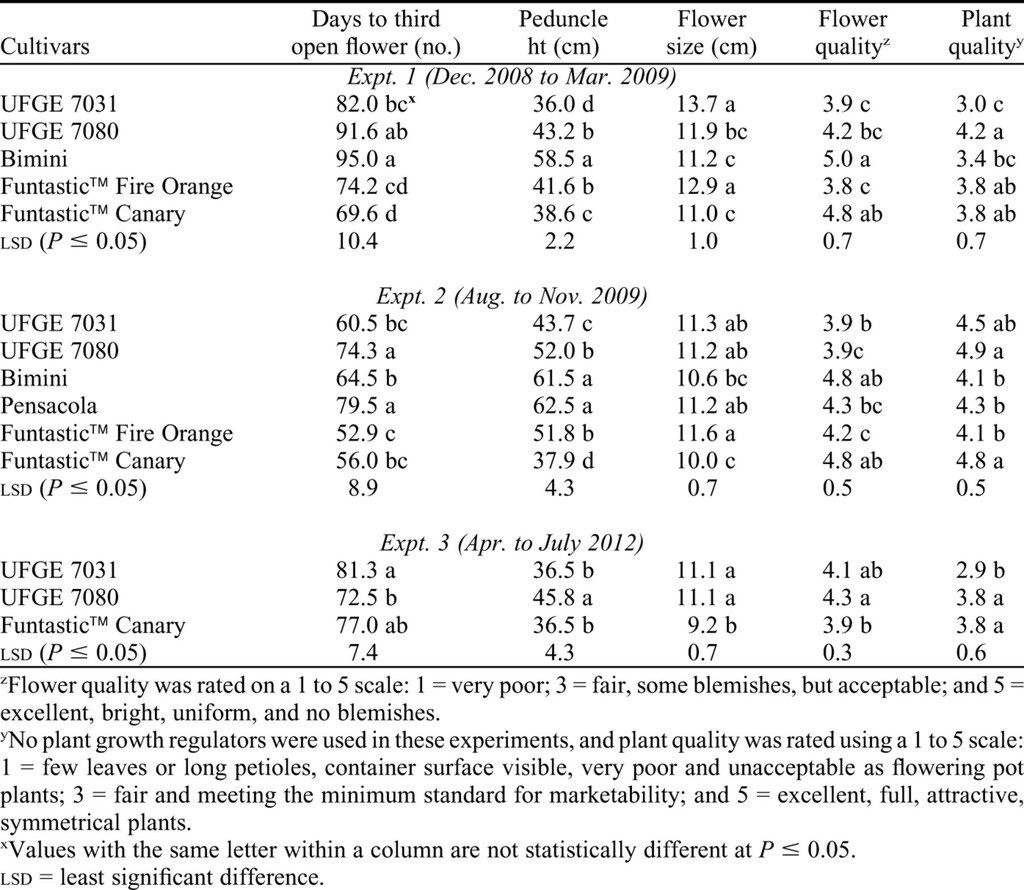 Number of flowers produced per potted plant of UFGE 7031 and UFGE 7080 in comparison with ‘Bimini’, ‘Pensacola’, ‘Funtastic™ Fire Orange’, and/or ‘Funtastic™ Canary’ in three experiments conducted in Wimauma, FL (2009 and 2012).

A randomized complete block design was used in these experiments with five (Expt. 4), five (Expt. 5), six (Expt. 6), four (Expt. 7), or six (Expt. 8) replications. The experimental unit was a single containerized plant. Similarly, ‘Funtastic™ Fire Orange’, ‘Funtastic™ Canary’, ‘Bimini’, and/or ‘Pensacola’ were included as control cultivars. Powdery mildew severity rating data from the last evaluation in each experiment were analyzed using PROC GLM in the SAS software and mean separation was done using the lsd at P = 0.05.

Number of flowers produced per plant of UFGE 7031 and UFGE 7080 under natural powdery mildew disease pressures in comparison with ‘Bimini’, ‘Pensacola’, ‘Funtastic™ Fire Orange’, and/or ‘Funtastic™ Canary’ in four experiments conducted in Wimauma, FL (2009 and 2012).

UFGE 7031 and UFGE 7080 produced attractive flowers and quality plants with peduncle and plant heights appropriate for use in large containers, and these new cultivars had many similar plant and flower characteristics compared with the existing Funtastic™ series bred and released for use in large containers. They have shown a moderate to high level of resistance to powdery mildew, a trait expected to be highly beneficial to greenhouse and nursery growers in reducing pesticide use and costs and for producing highly marketable finished potted gerbera. The powdery mildew resistance in these cultivars will likely be very beneficial to consumers in preventing significant damage from powdery mildew.

UFGE 7031 and UFGE 7080 tend to be somewhat slower than ‘Funtastic™ Fire Orange’ or ‘Funtastic™ Canary’ in leaf and flower development for the first 2 to 3 weeks after transplanting, resulting in fewer leaves and/or fewer flowers on finished potted plants. This crop-timing issue can be overcome by planting two tissue culture liners per container or planting one plug 2 weeks earlier than other Funtastic™ cultivars, so that production time would be similar to other cultivars in the Funtastic™ series.

The Florida Agricultural Experiment Station will apply for plant patents for UFGE 7031 and UFGE 7080. Production of these cultivars is to be with a licensing agreement with the Florida Foundation Seed Producers, Inc., P.O. Box 309, Greenwood, FL 32443. Information on propagation and/or production agreements can be obtained from the Florida Foundation Seed Producers, Inc. (<http://ffsp.net/>). UFGE 7031 and UFGE 7080 will be available under the name ‘FuntasticTM Tangerine Eye’ and ‘FuntasticTM Golden Eye’, respectively.

A single plant (≈10 weeks old) of UFGE 7031 grown from a single tissue culture liner in a 20-cm-diameter container. 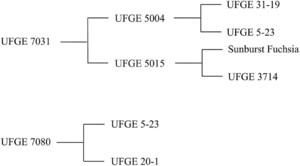 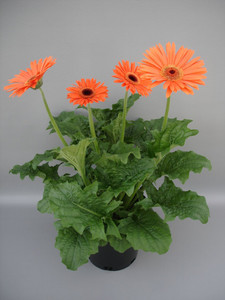 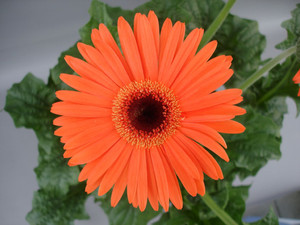 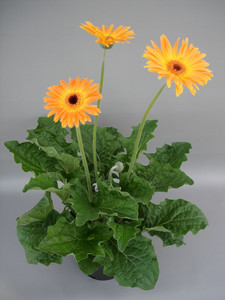 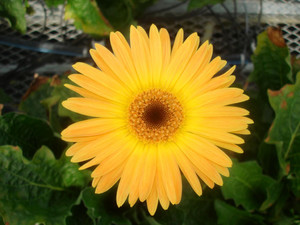