‘Iniagrape-one’ (Vitis vinifera L. × Vitis vinifera L.) is a new and distinct midseason-ripening, blue–black table grape cultivar for export markets that stores well for up to three months under the proper conditions. This cultivar presents large clusters and firm large berries with seed rudiments. This cultivar was released by the Table Grape Breeding Program at La Platina Experiment Research Center of the Agricultural Research Institute (INIA). It provides a black cultivar adapted to three growing regions in Chile and fulfills a niche market for black grapes. ‘Iniagrape-one’ fills the harvest period between the current commercial black cultivars and expands the shipping period for black grapes for the Chilean harvest season. ‘Iniagrape-one’ is harvested in mid-February in the central area of Chile (Aconcagua Valley), which is 1 week after ‘Black Seedless’ and ‘Midnight Beauty’ and 3 weeks before ‘Autumn Royal’. It also ripens by the second week of January under warm and dry growing conditions such as those found in northern Chile (Elqui Valley).

The vines at Vicuña received an application of hydrogen cyanamide (4%) in the winter (June); the vines at Los Andes and Llay-Llay were not sprayed with hydrogen cyanamide. At the three sites, the number of clusters per vine was adjusted at the berry set stage as a normal production practice and the clusters were tipped at this stage. 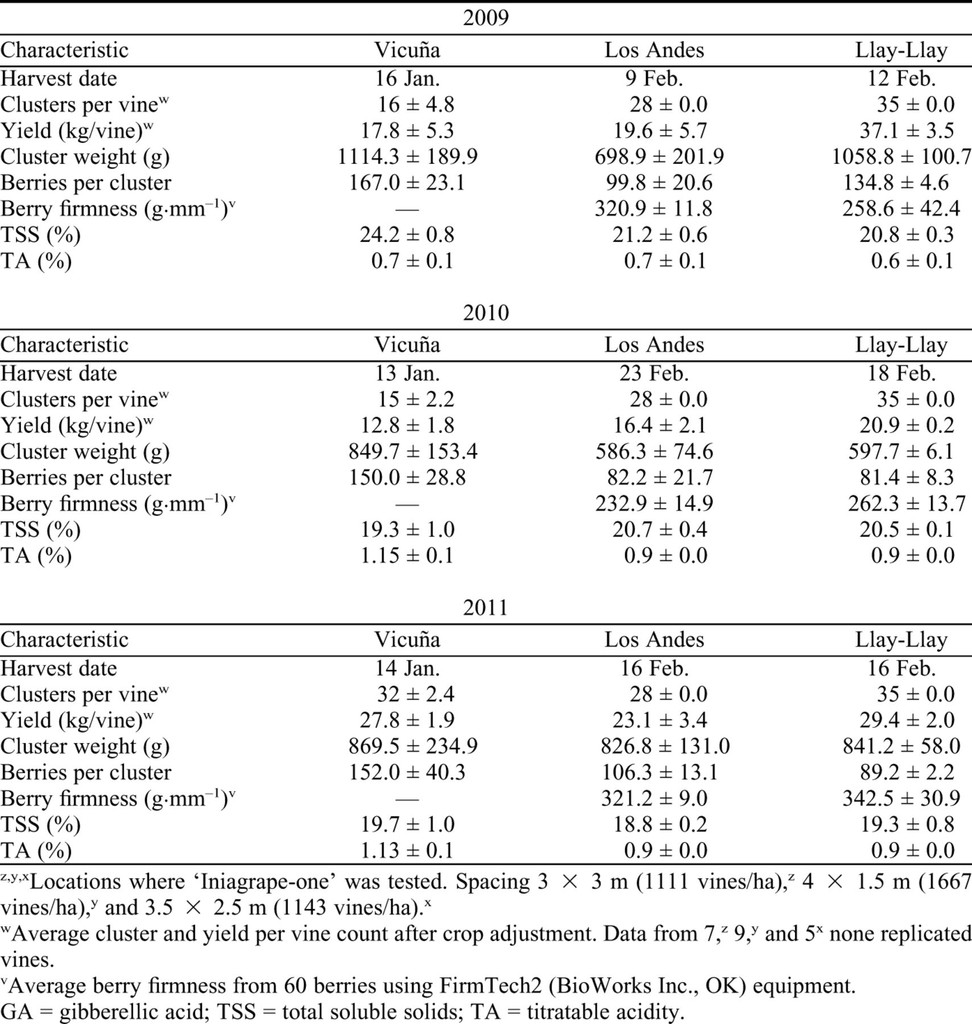 The clusters of ‘Iniagrape-one’ are attractive, conical, of medium density, and large size (Fig. 1). Without application of growth regulators, cluster weight ranged from 322 g to 723 g with an overall average 525 g. When GA was applied, overall average reaches 827 g, ranging from 586 g to over 900 g (Table 2). The ‘Iniagrape-one’ yield depends on the vine crop adjustment, and the cluster weight is related to cluster tipping and berry thinning (berries per cluster). During season 2011, the production averaged 27.8 kg per adult vine at Vicuña, 23.1 kg per adult vine at Los Andes, and 29.4 at Llay-Llay (Table 1); thus, the cultivar shows a high potential yield for export. 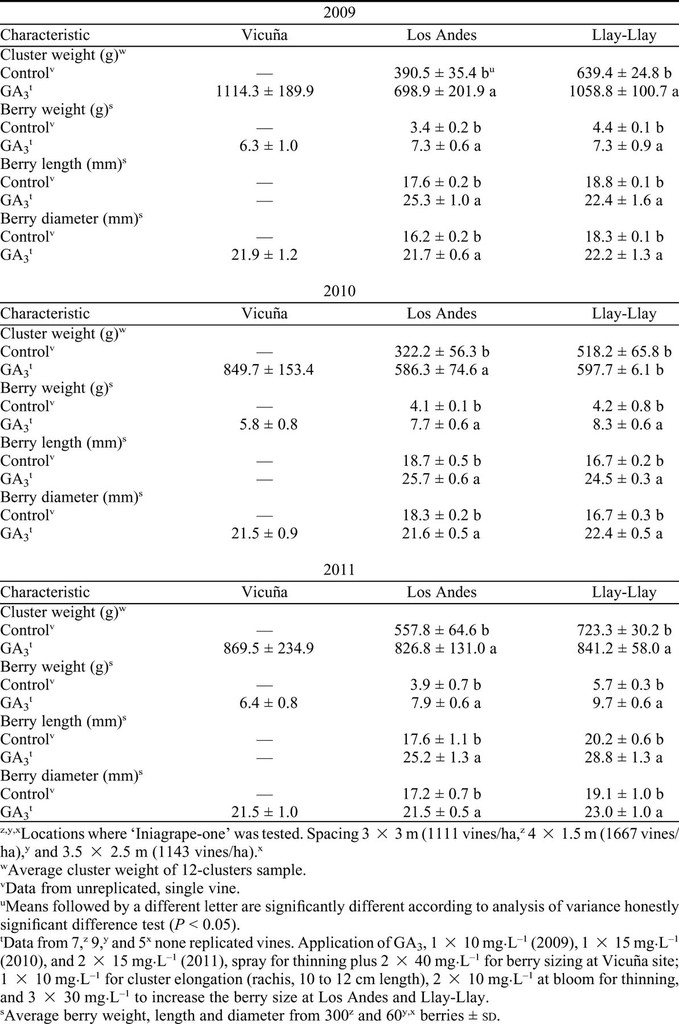 Unlike other colored cultivars, including ‘Black Seedless’ (Volosky, 1985), ‘Midnight Beauty’ (data no shown), and ‘Autumn Royal’ (Dokoozlian et al., 1998), ‘Iniagrape-one’ has a complete uniform blue–black color without the need for any technological approach for improving this attribute such as plant growth regulator applications, even in warm areas (Fig. 1).

The berries are an attractive shade of blue–black with broad ellipsoid and narrow ellipsoid shapes, a firm berry texture, strong pedicel attachment, and good flavor. The taste is characterized by a well-balanced sugar:acid ratio, particularly when considering long-term storage. A 20:1 sugar:acid ratio is achieved when berries reach a 19% to 20% total soluble solid content and 0.9 to over 1% of titratable acidity (Table 1).

‘Iniagrape-one’ has firm flesh and tough skin. We have observed that grape berry firmness is considered high when the force (g·mm−1) of skin deformation is over 240 g·mm−1 using a FirmTech 2 device (BioWorks, Wamego, KS). Except for the evaluation of the 2010 season at Los Andes, the berry firmness was above this value (Table 1).

The berries usually contained two to three rudimentary soft seed traces per berry. Occasionally, depending on the location and season, some few berries contain one seed. This behavior is similar to the Autumn Royal cultivar (Dokoozlian et al., 1998).

The new cultivar shows high bud fruitfulness, varying from 73.2% in the three basal buds of the cane to 93.3% in buds 8 to 10. The average cluster number per shoot is 1.5.

In general, the cluster characteristics in central Chile follow the same trend as in the northern area (Tables 1 and 2).

‘Iniagrape-one’ reaches commercial maturity in the middle of February in central Chile and one month earlier in northern Chile. ‘Iniagrape-one’ at Los Andes has been harvested in 9, 16, and 23 Feb., which was 18 to 26 d after ‘Flame Seedless’ and slightly after ‘Midnight Beauty’ (6 to 10 d) and ‘Thompson Seedless’ (2 to 7 d) (data not shown). ‘Iniagrape-one’ has shown a good storage potential that would be considered similar to that reported for ‘Midnight Beauty’ (Cain, 1998) and better than ‘Black Seedless’ (data not shown).

The Iniagrape-one cultivar is vigorous and produces a strong vine when grafted onto ‘Freedom’ or ‘Harmony’ rootstock. Cane or spur-pruning may be used because of the high bud fruitfulness along the shoots. Budbreak occurs in the middle of August and flowering on ≈20 Oct. when cyanamide is sprayed in the winter time (8 July) in northern Chile. In the central region where cyanamide is not used, budbreak occurs on or ≈22 Sept. and flowering on or ≈15 Nov.

The internode length at maturity canes varies from 5.5 to 13 cm. The leaf blade is pentagonal-shaped, and the teeth of the leaf margin are convex-shaped on both sides and are green in color. The blade length is ≈105 to 125 mm long and 175 to 195 mm wide. The petiole sinuses are slightly open to slightly close; the upper leaf sinuses are open. The leaves are smooth on both sides, and the leaf margin is serrated. On young leaves, the petiole is ≈35 to 50 mm in length, and its anthocyanin content is of medium intensity.

‘Iniagrape-one’ stores very well up to 90 d at 0 °C (Table 3). It has also been observed to have superior shipping quality in other evaluations compared with ‘Black Seedless’ (data not shown). The berry firmness remains within the commercial standard, and no surface or internal browning was noted throughout the storage period. Moreover, the postharvest berry attachment was good, implying that there are no problems of shattering during harvest or postharvest (less than 5% shatter). In contrast, ‘Midnight Beauty’ berry attachment to the pedicel has been classified as medium (Cain, 1998), and the union between the rachis and the pedicel is fragile in ‘Autumn Royal’ such that the berries can be separated from the rachis during harvesting (Dokoozlian et al., 1998). Unlike ‘Autumn Royal’, ‘Iniagrape-one’ has no tendency to crack (Dokoozlian et al., 1998).

Effect of cold storage (60 and 90 d at 0 °C) on the decay, shatter, and berry firmness of ‘Iniagrape-one’ bunches.z

After cold storage, the clusters remain in good condition up to 3 d at room temperature (shelf life).

The edible quality remains high after the cold storage period. Sensory evaluations emphasize the color, appearance, juice content, and flavor of this grape as the main quality characteristics. ‘Iniagrape-one’ has a distinct, particularly good flavor that is achieved by a balanced sugar:acid ratio both at harvest and after storage.

This new cultivar could be established in all the present Chilean areas used for table grape production. The potential production for export is high (3000 or more boxes of 8.2 kg·ha−1) considering a number of ≈30 clusters per vine and a density of 1667 vines/ha (spacing of 3 × 2 m). The distant Asian market appears to be an interesting destination for ‘Iniagrape-one’ because of its high cold storage capacity. Other target markets such as the United States and the United Kingdom may also be considered.

‘Iniagrape-one’ was registered at “Servicio Agrícola y Ganadero,” the Chilean department that controls the process of varietal certification, and a patent application has been submitted to the U.S. Patent and Trademark Office under the name ‘Iniagrape-one’. 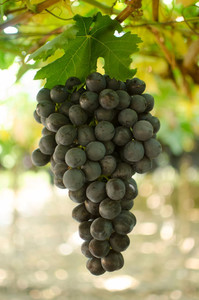 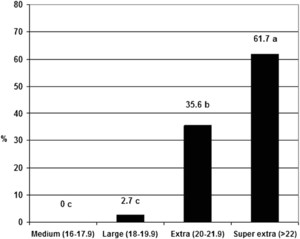