Grafting has been a common technique, often undertaken by many fruit tree nursery operators to achieve fruiting precocity, tree dwarfing characteristics depending on type of rootstock (Simons, 1987), avoiding termite attack on some fruit trees (such as the use of lemon rootstocks for orange trees), alkalinity tolerance (Colla et al., 2010), and improving fruit productivity (Mitani et al., 2008; Mng’omba, 2007). Many tropical and subtropical fruit trees (such as mango, avocado, citrus, etc.) and other temperate fruit trees are commonly propagated by grafting because other methods of vegetative propagation (such as the use of stem cuttings and marcots) may not be successful as a result of difficulties in root development.

Graft success of many nursery plants can be improved when a number of factors are considered. For instance, skills of grafters have been critical for the success of grafted mango plants (Mng’omba et al., 2010). This is because proper alignment of parenchymatous tissues of both scions and rootstocks greatly influences the graft success (Pina and Errea, 2005) and this art is likely to be low among many unskilled grafters. Time of grafting and stem diameter (thickness) of both scions and their respective rootstocks are also important factors influencing graft success in many fruit trees (Mng’omba et al., 2010). A rootstock of ≈10-mm thick stem diameter has been considered ideal for better graft-take and success (Hartmann et al., 1997). Mng’omba et al. (2010) reported a high graft-take and success with thicker (7-mm stem diameter) mango rootstocks compared with those with thinner (less than 5-mm) rootstocks.

It is a well-established fact that close proximity of cambium (parenchymatous) tissues of both the scions and rootstocks improves graft success because it ensures quick callus union formation from both graft partners. Many reports on graft success have been centered on rootstock diameter (thickness), proximity or proper alignment of vascular tissues of graft partners, callus development, graft compatibility, phenols, and callus development among other factors influencing the graft success (Mng’omba et al., 2008; Pina and Errea, 2005; Pina et al., 2012). To our knowledge, there has been limited knowledge on the effect of diagonal cut surface length (wounded area) in the splice graft method. Furthermore, there could be differences in terms of diagonal cut surface lengths made during grafting fruit trees, even among skilled grafters.

It remains unclear whether a longer wounded area or contact surface area of both scions and their respective rootstocks would improve graft success. It is unclear whether there has been a specific (correct) length of the diagonal cut surface (contact area) for each tree species that effectively improves graft success. It can be hypothesized that at a certain length of a contact surface area between graft partners (scions and rootstock), graft-take can be improved in many fruit trees. In view of the present knowledge gap, an experiment was undertaken to improve our understanding on the effects of diagonal cut surface lengths made during grafting of fruit trees. The objective was to assess the effect of different diagonal cut surface lengths (wounded area) on the graft success of Mangifera indica (mango), Persia americana (avocado), and Prunus persica (peach) fruit trees. We selected these three tree species because they are among the commonly grafted fruit trees in the tropics although peach is a temperate fruit tree. It is hypothesized that this study will help other grafters and fruit tree nursery operators to improve their grafting success, especially those using manual tree grafting.

Three fruit tree species, namely Mangifera indica (mango), Persia americana (avocado), and Prunus persica (peach, a temperate fruit tree), were selected for the current experiment. Their respective rootstocks were raised from seed collected from local varieties in Malawi and the experiments were carried out at the ICRAF-Makoka nursery. These rootstocks were left to grow for more than one year to attain a suitable size (at least 10-mm thick stem diameter) before grafting.

Mango rootstocks (Sabre variety, polyembryonic seed) were grafted early in Nov. 2010 and the experiment was left to stand up to Feb. 2011 (four months’ duration), whereas avocado rootstocks were grafted in Apr. 2010 and left to stand for five months (Aug. 2010). For peach rootstocks, grafting was carried out in July 2010 and data collection continued up to the end of Oct. 2010 (four months’ duration). The choice of the current grafting times was based on the fact that graft success has been observed to be high during the stated periods for the fruit tree species selected at the ICRAF-Makoka nursery.

For all three tree species studied, the splice grafting technique was used because this is the most common technique to the grafters at the ICRAF-Makoka nursery. Furthermore, only disease-free scions (previous year’s growth) were collected from actively growing and bearing mango (Tommy Atkins variety, monoembryonic type), avocado (Mayapan variety), and peach (Nectarine variety) fruit trees. All the scions from the three species were collected from fruit tree orchards located close to the ICRAF-Makoka nursery in Zomba district. These scions were stored in a cooler box and immediately transported to the site for grafting. For all tree species, a clean diagonal cut was made on both rootstock and scion and their cut surfaces were placed in close contact and then tied together with grafting tape. Figure 1 shows marks of diagonal cut of successfully grafted mango, avocado, and peach plants at the end of the study. For each tree species, rootstocks and scions were matched at grafting to ensure proper alignment of vascular tissues (cambium) for improved graft-take (Hartmann et al., 1997). Grafting was completed within 1 d and the grafting strips were kept intact onto the graft union interfaces until the end of the experiment.

The experiment was laid out as a randomized complete block design with at least three blocks (grafters). There were at least three grafters (skilled) and each individual grafter had 140 rootstocks to graft per plant species. The diagonal cut surface lengths (contact surface areas) investigated (treatments) were 5, 10, 20, 40, 60, 80, or 100 mm long. Skilled grafters were treated as random components because they were drawn from a large population of skilled nurserymen. Data on shoot length (measured from the graft union to the longest point), graft survival, number of leaves and shoots per plant, and stem diameter (measured at the union interface) were collected. The data were analyzed using mixed models, Proc Mixed procedure of the SAS system (SAS, Institute Inc., 1999) and only the least mean squares have been reported. In this experiment, Tukey’s test was used for mean separation. Data on graft survival were analyzed using a generalized model (Proc GENMOD of the SAS system that performed logistic regression).

There were significant differences in leaf number for grafted mango (P = 0.0035) and peach (P = 0.0019) plants (Fig. 4), but not for the grafted avocado plants. Longer diagonal cut surfaces resulted in higher leaf numbers for grafted mango and peach plants. For mango plants, the number of leaves only increased with grafted plants with diagonal cut surface lengths of 40 to 100 mm.

This current experiment shows that, up to a certain extent or length, longer diagonal cut surfaces improved the chances of properly aligning vascular tissues of both partners (scions and rootstocks) despite an increase in the wounded area. Generally, variations in stem thickness of scions and their rootstocks often contribute to poor alignment of vascular tissues. This has been reported in Uapaca kirkiana in which scions are always thicker than rootstocks and hence often result in poor alignment of vascular tissues (Mng’omba, 2007). It is likely that longer diagonal cut surface lengths will have similar or same stem diameter size at a certain point between the graft partners, and hence this can improve proper alignment of parenchymatous tissues. This can also quickly initiate cell-to-cell communication and eventually vascular continuity between the graft partners, especially for the graft-compatible partners.

From the present experiment, there are some advantages with respect to using longer diagonal cut surfaces of the graft partners apart from the high chances of properly aligning the parenchymatous tissues together. The advantages include the fact that grafters (most likely unskilled grafters) can easily handle and properly align parenchymatous tissues together and hence improve graft-take and survival. However, the drawback of using longer cut surfaces is that grafters will require more materials to graft plants. For instance, longer grafting strips or tapes are needed to cover and secure the entire length of the wounded area. This becomes expensive, especially where local materials (e.g., plastic strips) are not available to cover and secure the wounded graft area.

The other disadvantage of making longer diagonal cut surfaces during grafting fruit trees can be the demand for long scions and their respective rootstocks. This can be a setback because it may require some time to allow both the scions and rootstocks to grow to a desired size (height and length) before grafting. Obviously, the slow-growing tree species may take more than one year to attain a graftable size, especially with respect to rootstock height and diameter. Our observation at the ICRAF-Makoka fruit tree nursery has indicated that rootstock seedlings of many indigenous fruit trees (such as U. kirkiana and Strychnos cocculoides) take longer (greater than one year) to attain the right size, especially stem thickness, before grafting. Thus, grafting can be delayed when longer (greater than 80 mm) diagonal cut surface areas are needed.

Because grafting trees is an art and acquired through practice, the low graft-take often achieved by grafters (Mng’omba et al., 2010) can greatly be attributed to poor alignment of vascular tissues of both graft partners, especially for compatible partners. From this study, it is clear that the use of long diagonal cut surfaces has an advantage because grafters can easily align vascular tissues of both graft partners together, hence increasing chances of graft success. In this present experiment, a 40-mm long diagonal cut surface has proved to be superior with respect to graft survival, shoot length, and number of leaves for at least two fruit tree species studied. This diagonal cut surface length can be suitable because it may at least reduce the demand for more grafting strips and limitations in time to graft the slow-growing rootstocks.

The trend exhibited by number of shoots for avocado plants shows that more shoots were produced for grafts with shorter diagonal cut surfaces (5 mm long compared with 100 mm long). This could be that a scion with a long diagonal cut surface had many of its nodes covered by the grafting strip and hence suppressed production of new shoots. This also explains the reason that both mango and peach had a non-significant number of shoots produced despite differences in diagonal cut surface lengths. According to Lewis and Alexander (2008), graft strips (tapes) can be completely removed after three months or earlier if necessary, especially to prevent growth restriction of the grafted trees. However, they may be left intact in case of long transportation to the growers’ fields. Our observation has indicated that this practice protects grafted trees from damage during transportation.

Diagonal cut surface (100 mm long) of successfully grafted (A) Mangifera indica (mango), (B) Persia americana (avocado), and (C) Prunus persica (peach) at the ICRAF-Makoka nursery at the end of the experiment.

Number of leaves of (A) grafted Mangifera indica (mango) and (B) Persia americana (avocado) at the ICRAF-Makoka nursery four and four months after grafting, respectively.

Number of shoots per plant of grafted Persia americana (avocado) at the ICRAF-Makoka nursery five months after grafting.

Stem diameter (cm) at the union of grafted (A) Mangifera indica (mango), (B) Persia americana (avocado), and (C) Prunus persica (peach) at the ICRAF-Makoka nursery four, five, and four months after grafting, respectively. 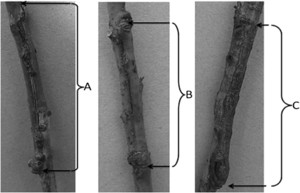 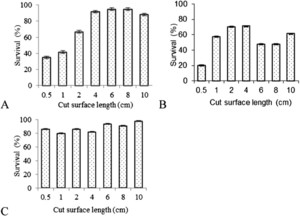 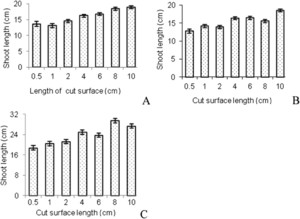 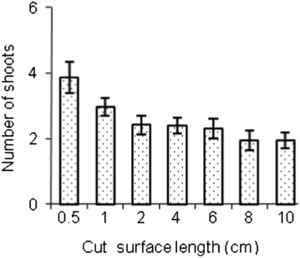 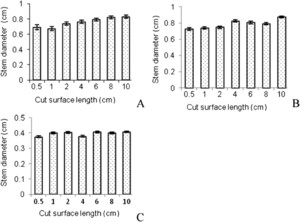