The external appearance of fruit is a crucial factor in consumer preference (Steyn, 2012). Sunburn, a disorder of the fruit peel caused by high temperature in combination with high irradiance (Glenn et al., 2002; Schrader et al., 2003), negatively affects the appearance of apples in warm production areas such as the Western Cape of South Africa. Depending on irradiance level, temperature and the duration of the photothermal stress (Gindaba and Wand, 2007; Schrader et al., 2003) affected fruit show pigment bleaching, a golden bronze sublethal discoloration, or necrosis of the fruit peel (Racskó et al., 2005; Schrader et al., 2003). Losses resulting from sunburn are therefore attributable to the injury and downgraded appearance of the fruit. Sunburn can decrease class one exportable fruit in South Africa by 20% to 50% in the orchard and packhouse and by a further 10% at the export destination (Bergh et al., 1980).

Although excessive heat and high irradiance are the main inductive factors in sunburn development, indirect factors such as relative humidity, air movement, and various cultural practices such as tree size, canopy structure, pruning, and irrigation may affect the incidence and severity of sunburn (Racskó and Schrader, 2012). Water stress has been reported to exacerbate the development of sunburn (Barber and Sharpe, 1971; Gonda et al., 2006), whereas regular irrigation purportedly decreases the incidence of sunburn, supposedly by facilitating sufficient evaporative cooling in the tree (Van de Ende, 1999). However, little research has been conducted to relate plant water status to sunburn incidence and severity; the link between plant water status and sunburn seems to be based primarily on observations. In a New Zealand study using five three-year-old ‘Braeburn’ trees per treatment, no irrigation did not significantly increase sunburn compared with the control treatment (Wünsche et al., 2001).

Considering the lack of experimental data, we set out to obtain empirical evidence that water stress increases the incidence and severity of sunburn. Hence, the objective of this study was to investigate the effect of water stress on plant water relations and how this affects sunburn development in apples.

The experiment was conducted during the 2009–10 season at Welgevallen Experimental Farm, Stellenbosch, South Africa (lat. 33°55′ S, long. 18°53′ E) using ‘Cripps’ Pink’ apple planted in 1998 on M793 rootstock. The tree spacing was 4 m × 1.5 m in a northeast by southwest row orientation. The orchard soil was classified as Oakleaf form, a cambisol with a high clay percentage and a high water-holding capacity. The Western Cape province of South Africa where the experiment was conducted has a Mediterranean-type climate with hot, dry summers that necessitates irrigation.

Measurements of stem water potential, soil water content, and sunburn were taken on Days 0, 8, and 15 (14, 22, and 29 Mar., respectively). To measure stem water potential, two mature inner canopy leaves closer to the trunk were each enclosed in a black polythene bag lined with an outer silver reflective tape for at least 1 h to allow the leaves to reach equilibrium with stem water potential. Still in the bags, the leaves were cut and water potential measured using a pressure bomb (Model 600; PMS Instrument Co., Albany, OR). FST was measured on Day 0 and Day 15 between 1300 hr and 1400 hr using a handheld infrared thermometer (Raynger MX4; Raytek Corporation, Santa Cruz, CA) aimed at the position on the fruit facing the current position of the sun.

Eight sun-exposed fruit without sunburn and without any overshadowing leaves were tagged per tree on the western side of the row at the onset of the experiment and sunburn severity assessed on Days 8 and 15 as well as at harvest using a 0 to 5 scale developed by Schrader and McFerson (Schrader et al., 2003) where 0 represented no sunburn and 5 the most severe form. Tagged fruit were culled to one fruit per cluster. Total sunburn incidence was also assessed on a per-tree basis at harvest. All fruit with sunburn at harvest were further graded into the three sunburn classes, i.e., bronzing, bleaching, and necrosis, according to Schrader et al. (2003).

The decrease in stem water potential at lower RSWC corresponds to a considerable difference in FST between treatments measured at Day 15 (Fig. 2). All treatments were significantly different with the no irrigation treatment having the highest average FST of 36.7 °C. The FST of the control and half irrigation treatment were 31.6 and 34.0 °C, respectively. The air temperature during FST measurement on Day 15 was 26.4 °C. FST in sun-exposed apple is reported to exceed air temperature by 5 to 15 °C (Bergh et al., 1980; Racskó and Schrader, 2012, and references therein).

Effect of water stress between 14 and 29 Mar. 2010 on sunburn incidence of tagged ‘Cripps’ Pink’ apples at the Welgevallen Experimental Farm.z 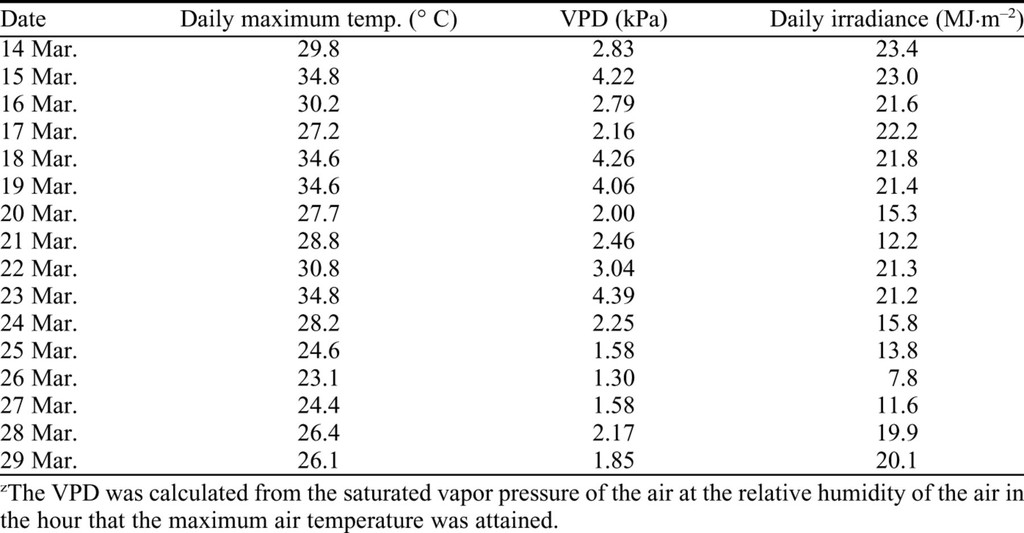 Effect of water stress from 14 to 29 Mar. 2010 on sunburn incidence (all fruit at harvest) of ‘Cripps’ Pink’ apples at the Welgevallen Experimental Farm.z

Effect of water stress between 14 and 29 Mar. 2010 on sunburn severity (0–5 sunburn severity scale with 0 having no sunburn and 5 the severest) of tagged fruit (Days 8 and 15) and at harvest in ‘Cripps’ Pink’ apples at the Welgevallen farm.z

Sunburn browning was the most predominant sunburn type in all treatments (Tables 1 and 3). There was a significant linear relationship between sunburn browning and sunburn necrosis with irrigation level for tagged fruit and total fruit at harvest (Tables 1 and 3). The percentage sunburn necrosis increased with water stress at the expense of the percentage sunburn browning. Sunburn necrosis for the no irrigation and control treatments was 35.7% and 5.4%, respectively. This indicates a progression in the severity of sunburn in accordance with the increase in FST with an increase in water stress. Sunburn necrosis in apple in Washington State occurs at a threshold temperature of 52 ± 1 °C, whereas sunburn browning requires a lower threshold FST of 46 °C under conditions of high light (Schrader et al., 2003). Daily maximum air temperatures of ≈35 °C were reached on four occasions (15, 18, 19, and 23 Mar.) during the trial period (Table 2). It is therefore conceivable that FSTs were elevated to levels conducive to development of sunburn necrosis, particularly in the water-stressed trees. No significant differences were observed between treatments for sunburn bleaching. Photo-oxidative bleaching results when a shaded fruit is suddenly exposed to the sun and can occur at peel temperatures below 30 °C (Felicetti and Schrader, 2008). This sudden exposure can be the result of branch breakages, defoliation, or in response to increased fruit weight as fruit grow. Considering these causative factors of sunburn bleaching, water stress is not expected to increase sunburn bleaching, except if leaf folding exposes shaded fruit to high irradiance.

The obvious question is how water stress results in an increase in FST and thereby in sunburn compared with irrigated trees. Fruit temperature is a function of heat exchange through radiation, evaporation, and convection between the fruit surface and the surrounding plant canopy microclimate (Saudreau et al., 2008; Smart and Sinclair, 1976). First of all, it is possible that leaf folding in response to water stress (Corelli-Grappadelli and Lakso, 2007) could have increased the extent and duration of sun exposure of the fruit, thereby increasing FST. However, although we did not assess leaf folding, FST measurements were done on tagged fruit that were selected based on their full sunlight exposure in the absence of overshadowing leaves.

The increased FST of fully exposed tagged fruit in water-stressed trees implies reduced evaporative and convectional heat loss from the fruit surface. Water evaporates from the apple surface through stomata during early fruit development and later through lenticels. As suggested by Van de Ende (1999), the higher FST of apples on water-stressed plants could potentially relate to lower evaporative cooling from lenticels resulting from a reduced VPD between the fruit and the atmosphere. Some indirect evidence of the role of evaporation in FST comes from research on detached and attached peppers (Rabinowitch et al., 1983). Detached fruit became warmer under irradiation than attached fruit at all stages of development leading the authors to speculate on the role of water movement through the fruit on the fruit heat balance. However, the contribution of evaporation from lenticels to cooling of the apple fruit surface is potentially quite small as a result of a high resistance to water movement in mature apple, although water permeability is considerably greater in developing fruit than in mature fruit (Nobel, 1975). Various fruits show a diurnal growth pattern in that expansion is greater at night, whereas fruit may even shrink during the day as a result of net water loss (Morandi et al., 2007, 2010; Tromp, 1984). Jones and Higgs (1982) reported that shrinkage in apple fruit averaged 31% of net growth in late summer. Tromp (1984) found that only 20% to 35% of the shrinkage could be attributed to evaporation with the remainder attributable to reverse flow of water from fruit to other parts of the tree under conditions of low leaf water potential. Considering that our experiment was conducted ≈150 d after full bloom (≈40 d before harvest) and that the xylem in apple fruit becomes dysfunctional from 50 to 70 d after full bloom (Dražeta et al., 2004), a contribution of xylem reverse flow to the fruit heat balance was unlikely.

In conclusion, plant water status seems to play a significant role in sunburn development. In this study, fruit on water-stressed plants displayed higher fruit surface temperatures with subsequent higher sunburn incidence and severity. The most severe form of sunburn, viz. sunburn necrosis, was highest where irrigation was completely withheld. The tagging of fully exposed fruit without overshadowing leaves excludes leaf folding and therefore increased light exposure of fruit as contributory factor to increased FST and sunburn but points to a direct effect of water stress on sunburn incidence. The respective roles of evaporation and convectional heat loss and the interaction of these factors with plant water status in the cooling of the apple fruit surface require further research.

Effect of irrigation level on average fruit surface temperature measured at midday on fully exposed ‘Cripps’ Pink’ apples at the Welgevallen farm. The half irrigation and no irrigation treatments were attained by exchanging normal spray nozzles (6 mm·h−1) with nozzles that gave half the normal delivery (3 mm·h−1) and stoppers (0 mm·h−1), respectively, from 14 to 29 Mar. 2010 (Days 0 to 15). Air temperature at the time of measurement on Day 0 and Day 15 was 28.4 and 26.1 °C, respectively. ns, *** Nonsignificant or significant at P ≤ 0.0001, respectively. Treatments with different letters differ significantly at 0.05 level. 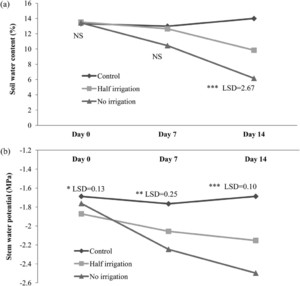 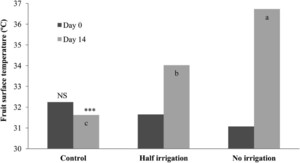