Development and Evaluation of a Portable, Handheld Mechanical Shaker to Study Fruit Detachment in Blueberry

Blueberry (Vaccinium spp.) production has increased greatly over the last decade, especially in the southeastern United States. It is currently valued at over $780 million in the United States [U.S. Department of Agriculture (USDA), 2012]. Sustaining the profitability of the blueberry industry requires a better understanding and the mitigation of problems associated with its production. Harvesting is generally one of the most expensive and labor-intensive aspects of blueberry production, especially when fruit are hand-picked. Mechanical harvesting can greatly reduce the costs associated with harvesting. Owing to the growing interest in the use of mechanical harvesting in blueberry, especially for fruit intended for the fresh market, there are considerable research efforts underway to enhance the efficiency of this process. In fact, a current area of focus of several blueberry breeding programs is the development of genotypes better suited for mechanical harvesting (NeSmith, 2009; Jim Olmstead, Steve Stringer, and Jim Ballington, personal communications). An additional area of research is the development of abscission agents that can facilitate fruit detachment and enhance the efficiency of mechanical harvesting (Malladi et al., 2012; Takeda et al., 2008; van Dalfsen and Gaye, 1999).

Better knowledge of fruit detachment properties is valuable in blueberry breeding because it is closely associated with suitability of a genotype for mechanical harvesting. Performing trials using commercial mechanical harvesters may be the most conclusive method to determine the suitability of a genotype for mechanical harvesting. However, such evaluations cannot be performed during the selection process in breeding programs as a result of factors such as the scale at which the plants are grown and the cost associated with such trials for multiple genotypes. Hence, much of the current evaluation of fruit detachment characteristics of genotypes during breeding and selection is performed through hand-harvesting. Evaluation of potential abscission agents to determine their effect on fruit detachment is essential to develop harvest aids that can enhance the efficiency of mechanical harvesting (Burns, 2002; Burns et al., 2005; Malladi et al., 2012). Such screening may not always be feasible using commercial-scale mechanical harvesters. A portable, handheld instrument that can allow for the mechanical shaking of a branch may provide an effective alternative and can greatly aid in blueberry breeding and abscission agent research efforts. The main objectives of this study were to develop a portable, handheld mechanical shaker and to evaluate its effects on fruit detachment in blueberry. To achieve the objectives, a reciprocating saw was modified to enable controlled mechanical shaking of blueberry branches. This instrument was evaluated across multiple rabbiteye and southern highbush blueberry genotypes. Additionally, mechanical shaking studies were performed using this instrument after treatment with abscission agents.

The portable, handheld mechanical shaker was developed at the Instrument Design and Fabrication Shop, University of Georgia. A variable-speed reciprocating saw (DeWalt Model no. DC385; DeWalt Industrial Tool Co., Baltimore, MD) driven by an 18-V lithium ion battery (DeWalt Model no. DC9181) was modified for this purpose (Fig. 1). An external resistor (5 ohm, 300 W, variable resistor, Part # E300K5R0E; Ohmite Manufacturing Co., Arlington Heights, IL) was fitted to the reciprocating saw to control the number of strokes per minute. A stainless steel adapter was developed and fitted to the instrument to function as an arm that could be clamped to a branch to enable mechanical shaking. The adapter was 30 cm in length, 1.5 mm in thickness, and 6.3 cm at its widest point. A V-shaped notch (4.5 cm wide and 2.3 cm deep) was designed at the end of this adapter and was padded with rubber strips. For mechanical shaking of the blueberry branches, the branches were placed within the V-shaped notch and a rubber band was used to attach the branch to the adapter through grooves designed on the adapter. Preliminary trials were performed to determine the number of strokes per minute required for fruit detachment from the branch. A setting on the resistor (2 to 2.4 ohm) that allowed for ≈900 strokes per minute was found to result in effective fruit removal in these trials and was used in all subsequent studies.

Evaluation of the mechanical shaker across blueberry genotypes.

Fruit detachment using the mechanical shaker was studied in rabbiteye blueberry plants in 2011 and 2012 and in southern highbush blueberry in 2012. In 2011, five- to six-year-old rabbiteye blueberry plants grown at the Horticulture Farm, University of Georgia, Watkinsville, GA, were used to evaluate the mechanical shaker. Three cultivars were used in this study: ‘Premier’, ‘Climax’, and ‘Briteblue’, with four replicates (individual plants). Mechanical shaking was performed on 17 July for the three cultivars. A branch with ≈50 fruit was selected on each plant. The adapter of the mechanical shaker was attached to the branch several inches below the fruiting wood, and the branch was shaken for 5 s. The number of fruit on the branch segment was determined before and after mechanical shaking, and the data were used to calculate the percent fruit detachment. Occasionally, shaking of a single branch resulted in fruit detachment from branches in close proximity. The detached fruit were collected in a catch frame [rectangular metal basket lined with laminated paper (45.5 cm × 40.5 cm × 10 cm)] placed below the plant. From the collected fruit, the proportion of immature fruit (green and pink fruit) and the proportion of fruit with the pedicel attached (stemmy fruit) were determined.

The effects of abscission agent application followed by mechanical shaking on fruit detachment were studied in 2011 in the rabbiteye blueberry cultivar, Briteblue. Five-year-old plants were used in this study (n = 3). Methyl jasmonate (Sigma-Aldrich, St. Louis, MO) at 20 mm and ethephon (2-chloroethylphosphonic acid; Bayer CropScience, Kansas City, MO) at 1000 mg·L−1 were applied along with an adjuvant (0.15% of Latron B-1956; Rohm and Haas, Philadelphia, PA) on 21 July. The control plants were treated only with the adjuvant. Abscission agent applications were performed using a hand-pump sprayer until runoff at 0830 hr. The average temperature on the day of application was 27 °C. At 24 h after application, branches with ≈50 fruit each were selected and the immature fruit (green and pink fruit) on these branches were removed to study the effects specifically on mature fruit. Mechanical shaking was performed on each of these individually, as described previously. Two branches per replicate were used in this study. The time taken for the removal of all fruit from the branch was recorded. The data were analyzed using analysis of variance and mean separation was performed using Fisher’s least significant difference (α = 0.05). Data analyses were performed using SigmaPlot 11 (Systat Software Inc., San Jose, CA).

Fruit detachment responses of the southern highbush blueberry genotypes were more variable than that of the rabbiteye cultivars. In TH907, mechanical shaking for 5 s resulted in 88% fruit detachment (Fig. 3A). However, in ‘Camellia’ and TH1129, shaking for a similar duration resulted in only 69% and 49% fruit detachment, respectively. The majority of fruit detachment in TH907 (58%) occurred at the point of attachment of the pedicel to the branch, whereas 12% and 33% fruit detachment occurred at this location in ‘Camellia’ and TH1129, respectively (Fig. 3B). In the southern highbush blueberry genotype, TH907, as high as 23% of the detached fruit was immature, whereas ≈12% of the fruit was immature in the other two genotypes. In some instances, multiple fruit were found to detach together as a result of the breakage of the peduncle in response to mechanical shaking. The majority of these were immature fruit.

Fruit detachment in response to mechanical shaking in rabbiteye blueberry cultivars. Individual branches with ≈50 fruit were shaken for 5 s using the mechanical shaker in 2011 (A–B) and in 2012 (C–D). (A and C) The fruit number on the branch was counted before and after shaking to determine the extent of total fruit detachment. (B and D) Fruit detached during shaking were collected in a catch frame and the proportion of fruit with the pedicel attached and the proportion of immature fruit were determined. Error bars indicate the se of the mean (n = 4).

Effect of abscission agents on time for fruit detachment on mechanical shaking. Rabbiteye blueberry plants of the cultivar, Briteblue, were treated with methyl jasmonate (MeJa; 20 mm), ethephon (1000 mg·L−1), or only the adjuvant (Control). At 24 h after treatment, individual fruiting branches with ≈50 fruit each were shaken using the mechanical shaker, and the time taken for complete fruit detachment was determined. Mean separation was performed using Fisher’s least significant difference (α = 0.05) after analysis of variance. Error bars indicate the se of the mean (n = 3). Similar letters above the bar indicate that the means are not significantly different. 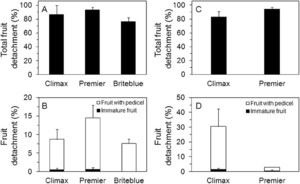 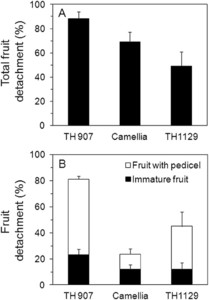 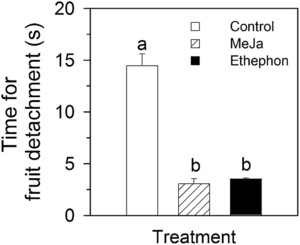