Twenty-one pear cultivars and breeders’ selections with interspecific pedigrees involving Pyrus ussuriensis Max. or P. pyrifolia (Burm.) Nakai crossed with P. communis were assessed for resistance to pear psylla (Cacopsylla pyricola Förster) using a nymphal feeding antixenosis assay. The proportion of nymphs live and present on the plants varied from 0.52 for Purdue 77-73, a P. ussuriensis × P. communis hybrid, to 0.08 for ‘Zelinka’, a P. communis cultivar from eastern Europe. Two P. ussuriensis × P. communis hybrid selections (NY 10355 and NY 10359) and the P. communis landrace cultivars, Batjarka and Zelinka, were the most resistant to nymphal feeding. NJ B9 T1 T117 may also be a useful source of resistance. The most resistant germplasm should be valuable genetic resources for the breeding of new pear cultivars with resistance to pear psylla.

Twenty-one pear cultivars and breeders’ selections with interspecific pedigrees involving Pyrus ussuriensis Max. or P. pyrifolia (Burm.) Nakai crossed with P. communis were assessed for resistance to pear psylla (Cacopsylla pyricola Förster) using a nymphal feeding antixenosis assay. The proportion of nymphs live and present on the plants varied from 0.52 for Purdue 77-73, a P. ussuriensis × P. communis hybrid, to 0.08 for ‘Zelinka’, a P. communis cultivar from eastern Europe. Two P. ussuriensis × P. communis hybrid selections (NY 10355 and NY 10359) and the P. communis landrace cultivars, Batjarka and Zelinka, were the most resistant to nymphal feeding. NJ B9 T1 T117 may also be a useful source of resistance. The most resistant germplasm should be valuable genetic resources for the breeding of new pear cultivars with resistance to pear psylla.

Pear psyllids are a serious insect pest of the cultivated European pear (Pyrus communis L.) in the production regions of North America and Europe. In North America, Cacopsylla pyricola (Förster) is the only psyllid pest of pears, whereas in Europe, C. pyri (L.) and C. pyrisuga (Förster) are also endemic. Cacopsylla bidens (Šulc) is endemic to parts of southern and eastern Europe as well as the Middle East. The insect has rapidly developed resistance to most of the pesticides used for control, and biological controls alone have rarely provided sufficient control for commercial production. The annual cost per hectare of chemical control is high. Cultivars with durable resistance would enhance the economic and environmental sustainability of pear production by reducing producer costs and pesticide use.

The behavioral and physiological responses of arthropod pests to resistant host genotypes are termed modes of host plant resistance as distinct from the underlying mechanisms of resistance. Major modes of host plant resistance are 1) antixenosis, which can be observed in terms of disruptions to insect orientation and settling (i.e., host finding) and inhibition of feeding and oviposition; 2) antibiosis, observed as delayed development, increased mortality, and reduced fecundity and egg hatchability; and 3) tolerance or the ability to withstand infestation without damage (Painter, 1951). The term antixenosis was introduced by Kogan and Ortman (1978) to define the inhibitory effects of the host plant, whereas nonpreference refers to behavior exhibited by the pest. Feeding antixenosis has been established as a key mode of resistance, because reduced feeding frequency is associated with reduced oviposition as well as increased mortality and delayed development (Bell, 1991; Bell and Puterka, 2004; Butt et al., 1988, 1989; Puterka, 1997; Robert et al., 1999).

Observation of breeders’ selections in the orchard suggested that some genotypes were at least moderately resistant to pear psylla (unpublished data). The purpose of this research was to assess the degree of resistance in breeders’ selections in a controlled experiment. The overall goal was to select the most promising parents for further breeding and cultivar development.

Five single-shoot plants of each genotype were generated by budding onto greenhouse-grown ‘Bartlett’ seedling rootstock grown in Metro Mix 510 potting soil containing a starter fertilizer (Scott’s, Marysville, OH) in standard 8-in. (20 cm) plastic pots. The trees were also fertilized weekly with Peter’s General Purpose 20-20-20 fertilizer (Scott’s). All plants were grown in a pesticide-free greenhouse until they each had at least 20 cm of shoot growth. All but the top four leaves were removed just before infestation, and a band of Tangle-Trap (The Tanglefoot Company, Grand Rapids, MI) was applied to the stem just basal to the fourth node to trap nymphs migrating off of the plant. No phytotoxicity on the stem resulting from the Tangle-Trap was evident when data were collected. The top two youngest, fully expanded leaves of each plant were each infested on the abaxial side with 10 second or third instar nymphs of pear psylla from a young laboratory colony for a total of 20 nymphs per plant. The transfer was accomplished by removing an infested leaf from a colony plant, placing it under a stereomicroscope, “teasing” a nymph with a single-hair brush until it appeared to have withdrawn its stylet and begun to move, lifting the nymph off of the leaf with the single hair, and then transferring the nymph to a leaf of the test plant. After infestation, the plants were maintained in a growth chamber at 25 ± 1 °C and a photoperiod of 16 h/8 h (light/dark) provided by a mixture of incandescent and high-intensity fluorescent bulbs. The experiment was conducted as a randomized complete block design with five sets of genotypes as individual tree replicates. As a result of “bud misses,” only three or four trees were available for six of the selections/cultivars. The numbers of live, actively feeding and dead nymphs were counted after 72 h. Active feeding was indicated by the presence of excreted “honeydew” associated with the nymph. Missing nymphs as well as those that migrated off the four test leaves and down the plant stem were presumed to be reacting to the antixenotic property of the host genotype. Counts on individual leaves and stems were summed for a total per plant. The numbers of live, feeding, and dead nymphs were divided by the original 20 nymphs to compute the corresponding proportions.

Data for all experiments were analyzed to determine whether the residuals met the assumptions underlying the analysis. Homogeneity of variances was tested by an examination of residual plots. Normality was tested using the Shapiro-Wilk test in SAS PROC UNIVARIATE (SAS Institute Inc., 1990) and examination of box and normal probability plots. A histogram with a fitted normal curve was also used to visually assess deviation from normality. Correlation of mean and residuals was examined using a plot of residual vs. predicted values and tested by SAS PROC CORR option SPEARMAN. Type IV sums of squares were computed. All analyses were performed using SAS PROC MIXED (Littell et al., 1996). The linear model for the analyses of genotype differences for each response variable was a mixed effects models with replication as a random effect and genotype as a fixed effect. Least-squares means and ses were computed. Mean separation for this procedure was performed using the Tukey-Kramer honestly significant difference method. The Tukey option was used to adjust for multiple comparisons. Mean separation letters for main effects were assigned by the SAS macro PDMIX 800 (Saxton, 1998).

Differences among broad species pedigree classes were also analyzed. First-generation interspecific hybrids were grouped with interspecific backcross hybrids. In this case, species was the fixed effect, and genotype within species and replication were random effects. Assumptions were tested as described previously. The rank correlation between proportion of live nymphs and proportion of feeding nymphs was computed using SAS PROC CORR with the SPEARMAN option.

The preliminary analysis of proportion feeding and proportion alive to test whether the data met the assumptions detected four outliers in the feeding data (single replicates for NJ A2 R59 T69, NJ Rock R25 T238, ‘Golden Spice’, and US65064-044), and these data were deleted from further analysis. The analysis was rerun, and it did not detect significant deviations from normality, but the residual plots showed some variation in variances and a tendency for a positive relationship between means and variances. However, the coefficients for the correlation between means and residuals were not statistically significant for proportion alive and proportion feeding but significant for proportion dead. Arcsin square root transformation, with Bartlett’s correction for 0 and 100%, was performed (Steel and Torrie, 1960), but the transformation did not improve the inequality of variances, and therefore, the raw data analysis is presented. Similar results were obtained when checking the species analysis for meeting the assumptions. Again, the raw data analysis is presented. 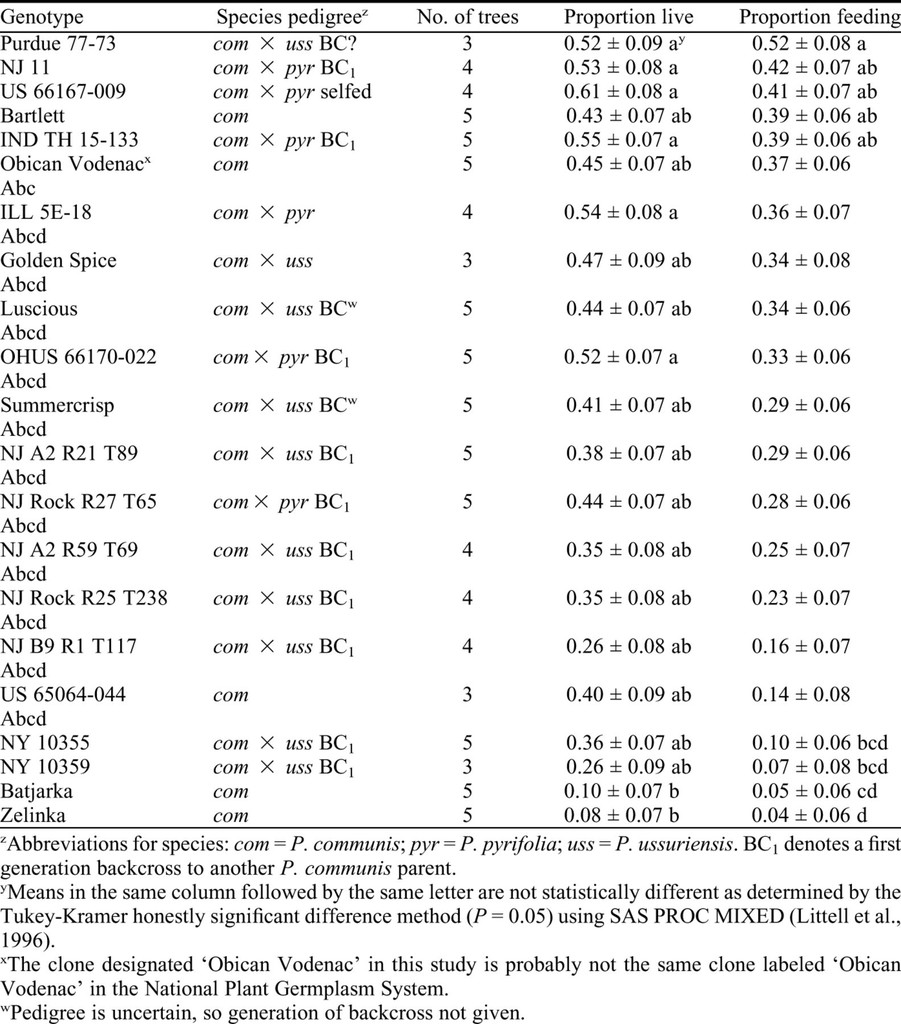 Nymphal survival and feeding according to species pedigree.

The P. communis group, largely as a result of the resistance of ‘Batjarka’ and ‘Zelinka’, was the most resistant and was not significantly different from the P. communis × P. ussuriensis backcross hybrid group. These two cultivars are putatively P. communis (van der Zwet et al., 1987) and are similar to 11 other psylla-resistant cultivars from eastern Europe in having large, thick leaves. The fruit are large and pyriform with a coarse, firm texture. Deciduous calyxes are sometimes observed, a trait they have in common with P. pyrifolia and a few genotypes of wild pear observed in Hungary. ‘Batjarka’ is a triploid (USDA, ARS, National Genetic Resources Program, 2012). The clone labeled ‘Zelinka’ at the Appalachian Fruit Research Station may be different from that at the National Clonal Germplasm Repository (NCGR) and is very similar in fruit and leaf phenotypes with ‘Batjarka’, ‘Erabasma’, ‘Jeribasma’, ‘Kalman’, Obican Vodenac’ (NCGR clone), ‘Topka’, and ‘Vodenac’, all pear psylla-resistant clones that are triploids. Therefore, it is possible that my clone of ‘Zelinka’, obtained directly from the U.S. Plant Introduction Center at Glenn Dale, MD, may also be a triploid, but that needs to be verified. The occurrence of triploidy might lead to the speculation that these cultivars are not pure P. communis.

Ovipositional antixenosis, and antibiosis, observed as delayed development and increased mortality are also important modes of resistance. The combined effects of these modes will result in varying degrees of population development and damage in the orchard. Although correlated with these modes, nymphal feeding antixenosis is only one part of the resistance phenomenon.

The high degree of resistance of ‘Batjarka’ and ‘Zelinka’ previously observed (Bell, 1992; Bell and Stuart, 1990) was confirmed as was the degree of resistance of NY 10355 and NY 10359 (Bell and van der Zwet, 1998). The high amount of feeding antixenosis of NJ B9 R1 T117 indicates that this selection may also be a promising source of resistance for breeding new cultivars with resistance to pear psylla. The apparent low susceptibility of US65064-044 was not expected based on the pedigree. None of the ancestors are known to be resistant. The observed reductions in live nymphs and nymphal feeding antixenosis need to be confirmed. Further studies of oviposition and development will be valuable to further characterize the degree of resistance in these selections.