Simple sequence repeat (SSR) marker fragment sizes are shown for the PCM47 (‘Ebony and Ivory’) and the parents ‘Whit VIII’ (Rhapsody in Pink) and ‘Chocolate Mocha’ (Delta Jazz). Fourteen of the 78 SSR markers used to verify parentage are shown, each separated by a gray line. Allele sizes are indicated in bps below the peak for each polymerase chain reaction-amplified fragment. Inheritance of maternal and paternal allele sizes are indicated by red and blue arrows, respectively. Parentage results for all Ebony crapemyrtles were consistent with the crosses described here.

An image showing flowers and leaves of ‘Ebony Fire’, ‘Ebony Flame’, and ‘Ebony Embers’ (left to right). Size and shape of the leaves and flowers are similar among all three red Ebony cultivars.

Image of the flowers and foliage for ‘Ebony Embers’ shows the deep red flowers highlighted by the dark foliage. The yellow appearance within each flower is the result of pollen on the upright stamens that protrude from the center of the flower.

An image showing flowers and leaves of ‘Ebony Glow’ and ‘Ebony and Ivory’ (right). Newly opened flowers were collected in the morning to highlight the pink blush observed with ‘Ebony Glow’. Size and shape of the leaves and flowers are similar between both of these cultivars. 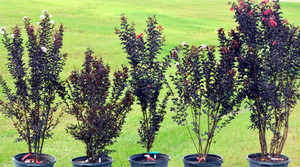 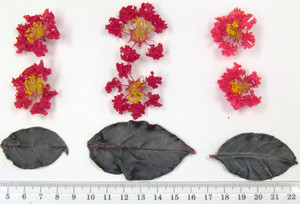 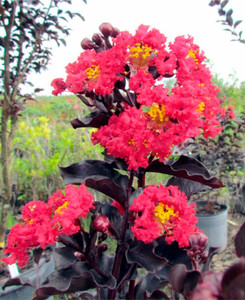 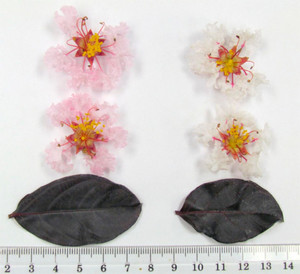