‘Yumi’ is the eighth peach cultivar released by the Rural Development Administration (RDA) peach breeding program since 1962. The main purpose of this program is to breed new peach cultivars that can satisfy consumers with high fruit quality. This program has focused on sweet and good tasting fruit with long shelf life. ‘Yumyeong’ has good shelf life with firm flesh (Kim et al., 1978) and ‘Chiyomaru’ produces good-tasting and early ripening fruit (Yamaguchi et al., 1989). In the 1990s, these two cultivars were chosen as parents to breed new peach cultivars bearing high-quality fruit. The cross between ‘Yumyeong’ and ‘Chiyomaru’, the most successful combination in this peach breeding program, produced ‘Mihong’ (Jun et al., 2007a), ‘Misshong’ (Jun et al., 2013), ‘Soomee’ (Jun et al., 2007b), and ‘Yumi’.

Trees of ‘Yumi’ are medium vigor and productive without alternate bearing and have a high chilling requirement of ≈790 chill units. Flowers are showy and pollen is abundant. Fruit ripen 82 d after full bloom and fruit size is medium with average weight of 243 g. Fruit skin is striped with light red and flesh color is creamy white. Flesh is soft and melting with good quality. Red pigmentation is very weak in the outer flesh and around the pit. Flesh clings to the pit even when fully ripe. ‘Yumi’ is early maturing, attractive, and sweet fruit for the fresh market.

‘Yumi’ was originated from a cross of ‘Yumyeong’ and ‘Chiyomaru’ at the National Institute of Horticultural and Herbal Science (NIHHS), RDA, Suwon, Republic of Korea, in 1995 (Fig. 1). After selected as ‘Wonkyo Da-23’ in 2002, the bud woods from this selection were grafted on wild peach seedling rootstocks and planted in seven different sites (Table 1). At each site, three randomized single-tree plots were observed from 2003 to 2008 along with other cultivars for comparison purposes. In all testing, trees were trained as open-center-natural form spaced 4 m between trees in rows spaced 5 m apart. After 6 years of evaluation, this cultivar was named ‘Yumi’ in 2008.

Freezing injury of ‘Yumi’ was not observed at any of the seven evaluation sites from 2003 to 2008 with the lowest experienced temperature at Chuncheon of –19.7 °C. ‘Yumi’ fruited well in all evaluation sites where the mean temperatures of January, the coldest month in the Republic of Korea, ranged from –3.70 to 0.95 °C (Table 1).

Full bloom date of ‘Yumi’ in Suwon was mid-April as were other cultivars. However, the full bloom dates differed up to 16 d with the evaluation sites. The earliest full bloom of ‘Yumi’ was observed on 7 Apr. at Jinju and Naju, in the southern region of the Republic of Korea, whereas the latest bloom was observed on 23 Apr. at Chuncheon, in the northern region of the Republic of Korea.

Trees of ‘Yumi’ are moderately vigorous with a spreading growth habit. Because trees of ‘Yumi’ tend to spread excessively when getting older, supportive structures are required. Leaves of ‘Yumi’ have reniform nectaries and the average size of leaf was 4.02 cm wide and 18.8 cm long.

Flowers of ‘Yumi’ are showy and large with average diameter of 3.92 cm (Fig. 2). The corolla color is light pink with five narrow elliptic-shaped petals. The inner color of calyx is greenish yellow and pubescence was present on the outer wall of the ovary. The stigma is positioned at the same level as the anther whose color is purplish red. The flower is fertile with abundant bright yellow pollen.

The average ripening date of ‘Yumi’ in Suwon was 12 July (Table 2), which is early in the peach harvest season in the Republic of Korea. Fruit of ‘Yumi’ ripen ≈82 d after full bloom, usually 8 d after ‘Mihong’, which is one of the earliest ripening cultivars.

Characteristics of peach ‘Yumi’ and other cultivars in Suwon, 2003–08.

Fruit shape of ‘Yumi’ is round and ground color of fruit skin is cream green with light red blush in a striped pattern as is ‘Yumyeong’ (Fig. 3; Table 2). Although ‘Yumyeong’, which is one of the parents of ‘Yumi’, has a stony-hard flesh, fruit flesh of ‘Yumi’ has a melting texture. Fruit flesh color of ‘Yumi’ is cream white, unlike another parent, ‘Chiyomaru’. Red pigmentation is very weak in the outer flesh and around the pit.

Thirty fruit samples were collected each year to determine their weight, flesh firmness, soluble solids content, and titratable acidity. The average fruit weight of ‘Yumi’ was 243.6 g when thinned to 15 to 20 cm apart. The fruit is large despite being an early-season cultivar. Fruit weight of ‘Yumi’ tends to increase as the trees age (data not shown). The average soluble solids content of ‘Yumi’ was 10.6 °Brix when fully ripe. This is highly acceptable considering the ripening time is July in which the quarter of yearly precipitation occurs (Table 1). Fruit acidity of ‘Yumi’ was 0.18% (malic acid equivalent), which is lower than that of ‘Mihong’ and ‘Yumyeong’. Fruit flesh of ‘Yumi’ is firmer than ‘Mihong’ and ‘Misshong’ but not firmer than ‘Yumyeong’, which is one of the firmest cultivars in the Republic of Korea. Fruit of ‘Yumi’ are clingstone as are other comparison cultivars. Although ‘Yumi’ fruit has fewer split pits than the other early-season cultivars, excessive thinning could lead to pit splitting. The productivity of ‘Yumi’ was ≈2200 kg/10 a without alternate bearing in 6-year-old trees, whereas ‘Mihong’ and ‘Yumyeong’ have productivity of ≈1800 and 2800 kg/10 a, respectively.

‘Yumi’ showed 1% to 5% leaf or fruit with lesions resulting from brown rot [Monilinia fructicola (Winter) Honey] and bacterial leaf spot [Xanthomonas campestris pv. pruni (Smith) Dye] (Table 3). This result was similar to that of other cultivars. Other specific diseases were not observed. ‘Yumi’ has a low incidence of fruit cracking and little preharvest drop. Incidence of split pits was rare, which is desirable in early-season cultivars.

Diseases and physiological disorder of ‘Yumi’ and other peach cultivars in Suwon 2003–08.

Plant Variety Protection for ‘Yumi’ was achieved in 2009 and registration was achieved in July 2012 after 3 years of evaluations on distinctness, uniformity, and stability according to Korean Seed Industry Law. Non-virus-indexed scions for research purposes are available from Ji Hae Jun (jun0810@korea.kr). 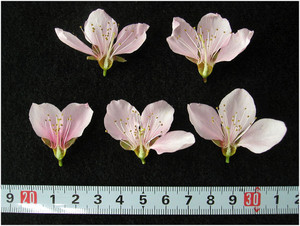 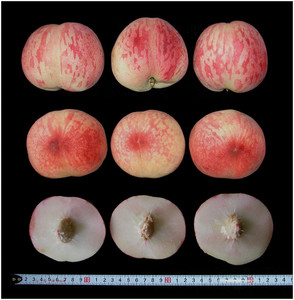