‘Sweetheart’ is a new almond [Prunus dulcis Miller (D.A. Webb)] cultivar from the breeding program of the University of California at Davis, CA. ‘Sweetheart’ kernels have a cordate shape and very high oleic acid content and so are similar to the premium roasting quality Spanish cultivar Marcona but with a much higher kernel-to-nut ratio. ‘Sweetheart’ shows good overlap with the economically important early bloom of ‘Nonpareil’ and possessing a cross-incompatibility controlling S-genotype of S1S14, it is fully cross-compatible with ‘Nonpareil’ (S7S8) and cross-compatible with all currently planted California almond cultivars except ‘Winters’ (S1S14). Trees have an upright and open architecture, which produce high yields with good year-to-year production consistency. The name ‘Sweetheart’ refers both to its high heart-healthy oleic acid content and its heart-shaped kernel.

The almond cultivar Sweetheart originated as a seedling from a cross between University of California at Davis (UCD) breeding selections SB3, 54-39E, and 25-26 and was initially evaluated as selection SB13,36-52 (Fig. 1). The seedling’s lineage includes the dominant California cultivar Nonpareil and Lukens Honey peach (Prunus persica Batsch) as a source of self-compatibility and disease resistance. Selection SB13,36-52 was selected for regional testing as an early bloom pollenizer for ‘Nonpareil’ based on its desirable early flowering and high kernel quality with an average kernel lipid content of 45% as well as a very high kernel oleic acid content of 71% when compared with 39% and 67%, respectively, for ‘Nonpareil’ (Abdallah et al., 1998). California almond cultivars are self-incompatible and so self-sterile, requiring cross-compatible pollenizer cultivars for successful seed set. As a result of its productivity and desirable market quality, ‘Nonpareil’ currently comprises over 40% of the 162,000 ha of commercial production in California (Almond Board of California, 2012). The remaining cultivars are mainly planted as pollenizers for ‘Nonpareil’ with most initiating bloom after ‘Nonpareil’ and thus successfully covering the later bloom but leaving the early bloom vulnerable. Almond flower fecundity is highest in the early bloom, resulting in early pollenizers having high economic importance (Asai et al., 1996). Most early-flowering pollenizers, however, show inconsistent bloom overlap with ‘Nonpareil’ and a consequent lower production consistency for both cultivars (Micke et al., 1997). Flowering time in almond is determined by the accumulation of sufficient chilling units to overcome flower bud dormancy followed by the accumulation of sufficient heat units for bud development to flowering (Tabuenca et al., 1972). Requirements for both chilling and heat units differ among individual cultivars resulting in inconsistent year-to-year bloom overlap.

The tree is upright and vigorous (Fig. 2). Production occurs on a combination of spurs and terminal shoots. This bearing habit results in high productivity with an open tree architecture that allows greater light penetration and air circulation to the canopy interior and so lower blossom and foliar disease. Flowers are numerous and produce abundant pollen. Kernels have a cordate shape (Fig. 3) and have both a high average kernel lipid content of 45% as well as a very high oleic acid content of 71% and so are similar to the premium roasting quality Spanish cultivar Marcona but with a much higher kernel-to-nut ratio (Table 1). ‘Marcona’ (S11S12) is a heavily planted cordate-shaped and self-incompatible cultivar in Spain and because of its very high oleic acid content (≈70%) confers a high roasting quality (Socias i Company et al., 2008).

Self-incompatibility in almond is controlled by the gametophyte so that ‘Nonpareil’ (S7S8) will reject any pollen with a S7 or S8 genotype (Kester et al., 1994; López et al., 2006; Ortega et al., 2005). ‘Sweetheart’ has the S-genotype (S1S14) and so is fully cross-compatible with ‘Nonpareil’ and is cross-compatible with all commercially planted almonds except the related UCD cultivar Winters (S1S14). Self-incompatibility in almond is variable with most commercial cultivars setting less than 10% of self-pollinated flowers and so considered self-incompatible (Weinbaum et al., 1989). Self-compatible cultivars need to set greater than 20% set after self-pollination to be considered commercially useful (López et al., 2006; Socias i Company et al., 2004). In a small number of cultivars, including ‘Sweetheart’ and ‘Winters’, the selfing percentage is between 10% and 20%, which, although too low to be considered self-compatible, does confer greater crop stability when honeybee cross-pollination is limiting (Gradziel, 2009).

‘Sweetheart’ along with ‘Marcona’ and other cultivar standards was evaluated in a replicated trial planted in 2004 in Kern County in the southern San Joaquin Valley. Data were collected from 2005 to 2012 for bloom and harvest period, nut yield and quality, and disease and insect damage. A number of smaller grower plantings at additional Sacramento and San Joaquin Valley sites were also used to verify replicated plot findings.

The combination of good bloom overlap with ‘Nonpareil’ (Fig. 4), open tree architecture, high flower density (Fig. 2), and partial self-compatibility has resulted in consistently high productivity over the 7 years of evaluation (Table 1). The thin “paper-shell” of ‘Sweetheart’ (Fig. 3) makes kernels more susceptible than ‘Marcona’ to damage by navel orangeworm (Amyelois transitella Walker), although insect damage was consistently under 5% for all test years. The kernel/nut (kernel plus shell) harvest proportion of 0.68, however, is more than double the ‘Marcona’ ratio of 0.28 (Table 1). The incidence of undesirable kernel types, particularly double kernels and kernels having multiple embryos, was consistently less than 5%, being similar to ‘Nonpareil’. The development of creases or folding of the kernel seedcoat, which is undesirable in the fresh market as well as for blanched kernels, was also very low in ‘Sweetheart’. Nuts and kernels of ‘Sweetheart’ were also similar to ‘Marcona’ in cordate shape; however, under intensive California cultivation, ‘Sweetheart’ produces a slightly more angular and smaller kernel than ‘Marcona’ (Table 1). Harvest of ‘Sweetheart’ is just after the dominant cultivar Nonpareil, which promotes more efficient use of harvesting equipment (Fig. 4). ‘Sweetheart’ trees showed moderately susceptibility to almond hull rot (Rhizopus spp. and Monilinia spp.), being similar to ‘Nonpareil’ with less than 100 shoot strikes per tree observed in high disease years as compared with over 500 strikes per tree observed in susceptible control cultivars.

‘Sweetheart’ is available as a patented (U.S. Plant Patent 19436 P3) cultivar with licenses granted through the University of California Technology Transfer Services, 1850 Research Park Drive, Suite 100, Davis, CA 95618-6134. Propagation material is distributed as a registered virus tested source through the Foundation Plant Service (FPS), University of California, 1 Shields Avenue, Davis, CA 95616. A virus tested and unpatented source of the Marcona cultivar has also been made available through FPS. 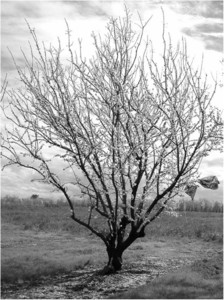 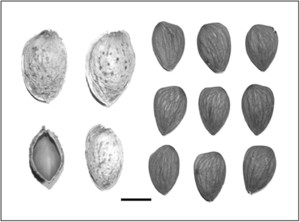 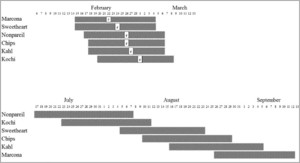