In Georgia, cool-season grasses are primarily seeded in fall, rather than spring, to optimize establishment and minimize competition with warm-season annual grassy weeds. However, soil disruption, fertilization, and regular irrigation during establishment of cool-season grasses may promote crabgrass (Digitaria spp.) and goosegrass (Eleusine indica Gaertn.) germination in late summer or fall (Peters et al., 1989). Failure to control annual grassy weeds during establishment of cool-season grasses may lead to subsequent emergence of winter annual weeds such as annual bluegrass (Poa annua L.) that warrant further herbicide use and intensive management for successful culture.

Quinclorac effectively controls crabgrass and may be applied to seedling tall fescue at reduced labeled rates (less than 0.84 kg a.i./ha) but applications do not control goosegrass and may cause excessive injury to creeping bentgrass and perennial ryegrass during establishment (Hart et al., 2004; McElroy and Breeden, 2007). Ethofumesate, mesotrione, and siduron are herbicides used during cool-season turf establishment but inconsistent efficacy, cost, and application regimens limit the effectiveness of these herbicides (Johnson, 1983; McElroy and Breeden, 2007; Moshier et al., 1976). Fenoxaprop is an aryloxyphenoxypropionate (AOPP) herbicide used in cool-season turf for controlling bermudagrass [Cynodon dactylon (L.) Pers.], crabgrass, and goosegrass but applications may injure perennial ryegrass, tall fescue, and other species during establishment (Dernoeden, 1987; Johnson and Carrow, 1993).

Metamifop is an AOPP herbicide used in rice (Oryza sativa L.) for post-control of grassy weeds (Hae-Jin et al., 2002). Compared with AOPP herbicides available in turf, creeping bentgrass has better tolerance to metamifop at rates required for weed control, whereas perennial ryegrass and tall fescue also have acceptable tolerance to applications (Carroll et al., 1992; Dernoeden, 1989; Flessner and McElroy, 2011; McElroy and Rose, 2009; Shim and Johnson, 1992). Metamifop could be useful for controlling annual grassy weeds after seeding cool-season grasses but turf tolerance during establishment has received limited investigation. The objective of this research was to evaluate application timing of metamifop, compared with fenoxaprop, on the establishment of creeping bentgrass, perennial ryegrass, and tall fescue grown from seed.

Field experiments were conducted in Griffin, GA, from Sept. 2011 to Mar. 2012 and Sept. 2012 to Feb. 2013. Plots in the second experiment were adjacent to the first experiments. Glyphosate was applied at 2.5 kg a.e./ha to mature tall fescue grown on a Cecil sandy clay loam (fine, kaolinitic, thermic Typic Kanhapludults) with pH 5.9 and 2% organic matter in September of both years. Fields were scalped with a rotary mower, debris was removed, and soil was sliced in two directions at 1-cm depth. ‘Penn A-4’ creeping bentgrass, ‘Manhattan V’ perennial ryegrass, and ‘Titan’ tall fescue were seeded in 0.9-m strips at 49, 392, and 392 kg·ha−1 on 17 Oct. 2011 and 8 Oct. 2012. Creeping bentgrass seed was mixed with a 5N–2P2O5–0K2O fertilizer at a 6:1 fertilizer:seed ratio to facilitate accuracy of the targeted seeding rate. Species were randomized in four replications, and fields were irrigated to promote turf establishment. Creeping bentgrass and perennial ryegrass were mowed at 1.3 cm with a reel-mower twice a week and tall fescue was mowed weekly at 6.3 cm with a rotary mower. The initial mowing began at ≈2.5 weeks after seeding and clippings were returned.

Treatments were applied perpendicular to turf strips in a split-plot design where whole plots were species and subplots were herbicides. Treatments included fenoxaprop-p-ethyl (delineated fenoxaprop) at 50 g a.i./ha and metamifop at 200, 400, or 800 g a.i./ha. Applications were made at 1, 2, 3, or 4 weeks after seeding. Herbicide formulation, application dates, and turfgrass mowing heights during establishment are presented in tables. A nontreated control was included. Fenoxaprop was chosen as a standard comparison with metamifop at a recommended rate for annual weed control in most cool-season grasses (Anonymous, 2004). Applications were made with CO2-pressured sprayers calibrated to deliver 374 L·ha−1 with a single flat-fan nozzle (9504E flat-fan; TeeJet Spraying Systems) at 222 kPa.

Turfgrass cover was visually measured on a percent scale where 0 equals no turf cover and 100 equals complete plot cover. Cover was rated weekly from 2 to 8 WAS and at 21 WAS. Grid counts were made for each species by counting the number of 161-cm2 squares within a 0.58-m2 grid (36 total squares per grid) with shoots present (yes/no) of the desirable turf species at 20 WAS in the 2012–13 experiment. Data were subjected to analysis of variance at the 0.05 P level. Species were analyzed separately as randomized complete blocks. Means were separated with Fisher’s protected least significant difference test at α = 0.05. Year-by-treatment interactions were not detected, and thus, years were combined. 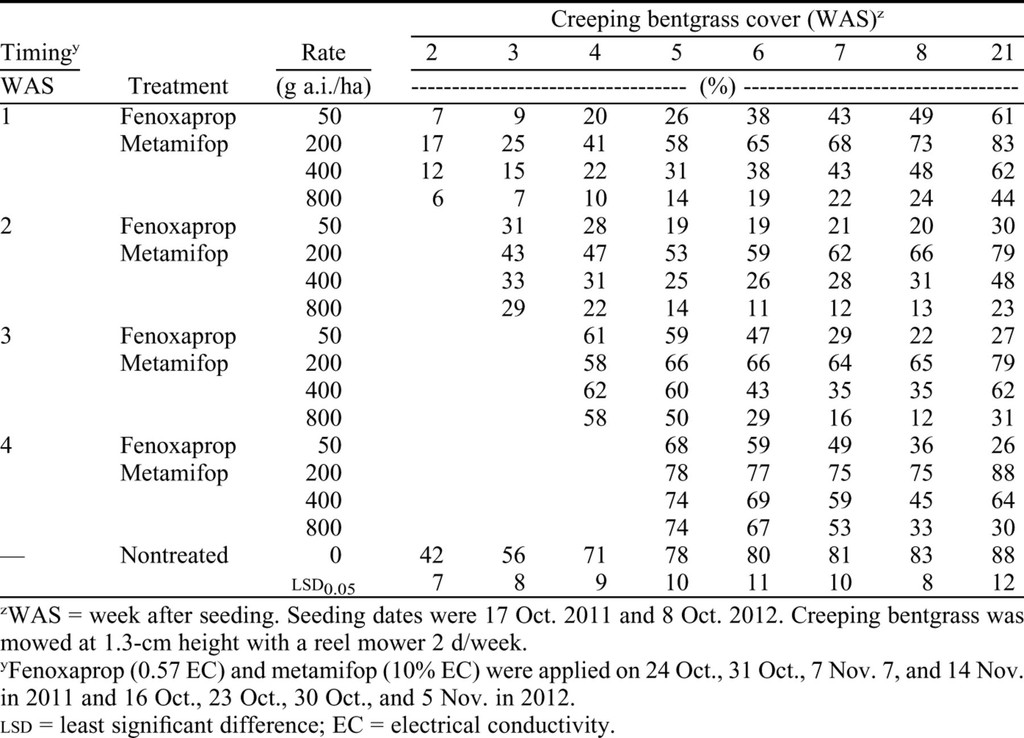 At 21 WAS, creeping bentgrass cover was similar to the nontreated from metamifop at 200 g·ha−1 applied at all timings after seeding, averaging 83% cover (Table 1). However, all other treatments reduced measurements from the nontreated, ranging from 23% to 64% cover. Reductions in creeping bentgrass groundcover were exacerbated by increased metamifop rate from 400 to 800 g·ha−1 at all timings, whereas fenoxaprop reduced cover more when applied 2, 3, and 4 WAS compared with 1 WAS. 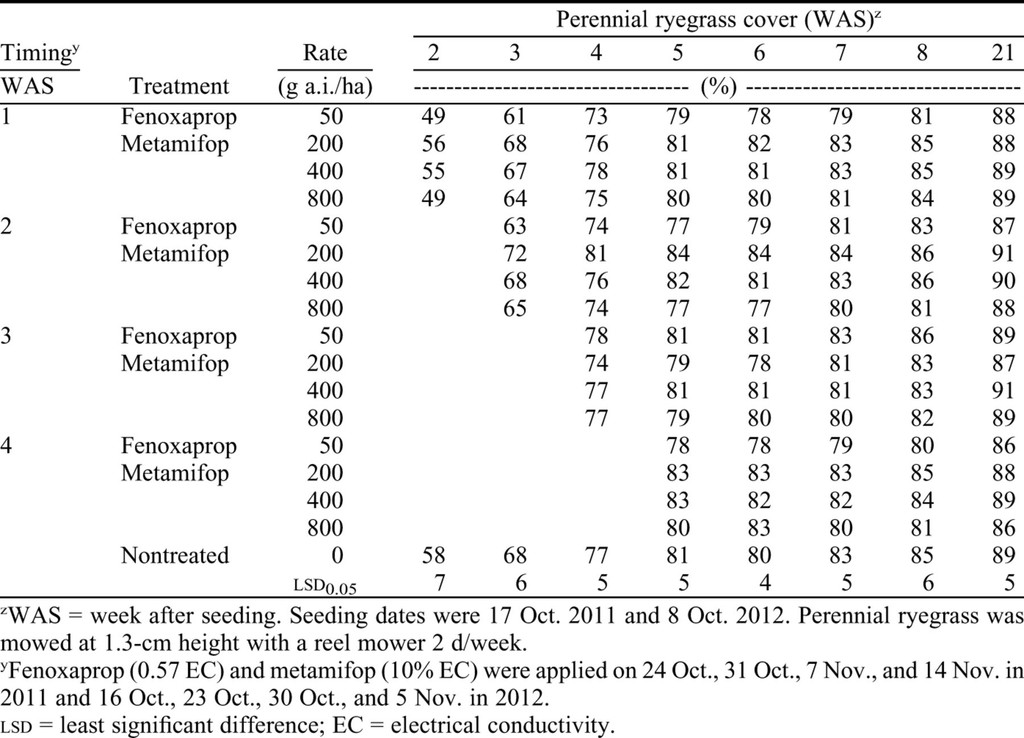 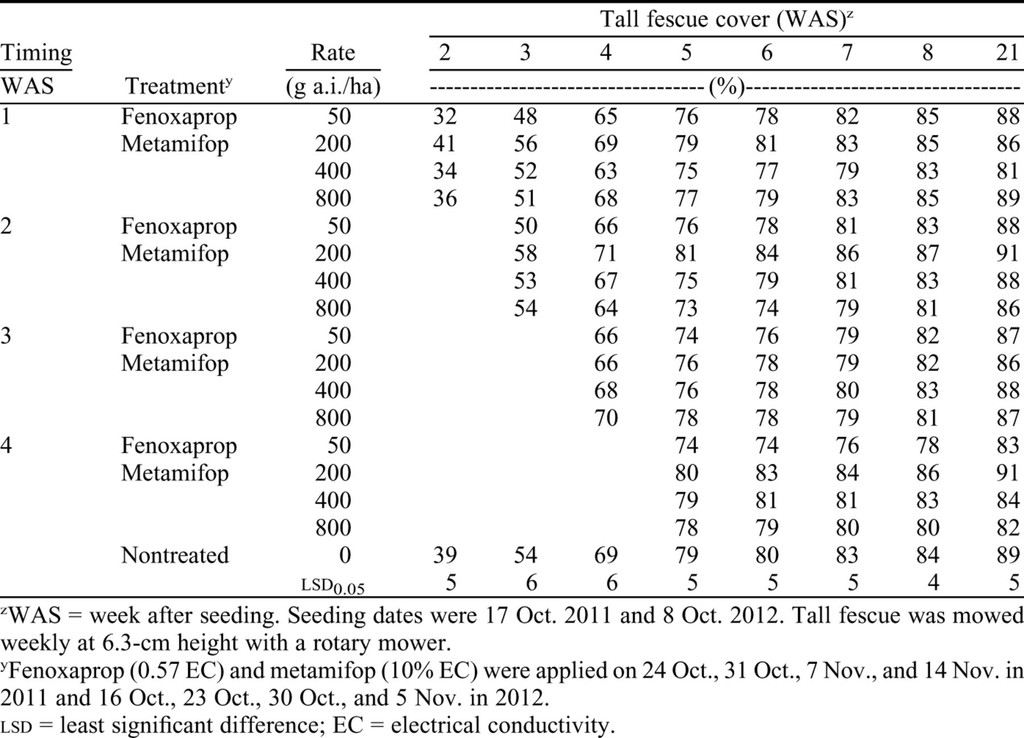 Treatment-by-application-timing interaction was not detected for grid count measurements for any species, and thus, main effects are presented separately. For nontreated creeping bentgrass, 100% of grids had turf present at 20 WAS, whereas plots treated with metamifop at 200 and 400 g·ha−1 were similar (Table 4). However, fenoxaprop and metamifop at 800 g·ha−1 reduced the presence of creeping bentgrass in grid counts to 68% and 71%, respectively. Treatments applied 2, 3, and 4 WAS reduced the presence of creeping bentgrass to 72% to 86% cover in grid counts but treatments 1 WAS were similar to the nontreated. Perennial ryegrass and tall fescue were present in all sampling grids across all treatments and application timings at 20 WAS. 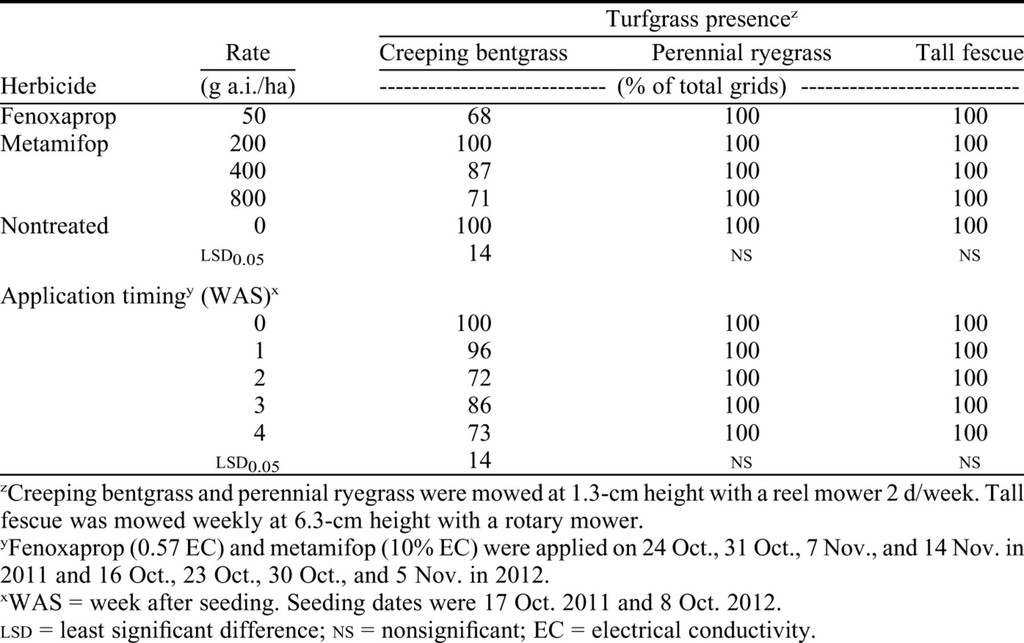 Metamifop may have potential for use on perennial ryegrass and tall fescue seedlings, but reductions in creeping bentgrass cover may limit use to established turf only at rates tested. Although turf seedling tolerance to metamifop has received limited investigation, researchers have reported tolerance to other AOPP herbicides. For example, Dernoeden (1987) noted perennial ryegrass and tall fescue seedlings were tolerant to fenoxaprop from 90 to 280 g·ha−1, and treatments effectively controlled smooth crabgrass (Digitaria ischaemum Schreb. Muhl.). In Georgia, Johnson and Carrow (1993) reported fenoxaprop temporarily injured tall fescue, but treatments did not reduce turfgrass density from the nontreated. In Virginia, Beam et al. (2005) noted fluazifop plus fenoxaprop treatments injured newly seeded tall fescue less than 5% at 5 weeks after initial treatment, suggesting applications have potential for grassy weed control during turf establishment.

Although AOPP herbicides are efficacious for grassy weed control, turf managers may also apply other chemistries in newly seeded cool-season grasses. McElroy and Breeden (2007) reported mesotrione at 280 g·ha−1 applied sequentially at 28 and 42 d after emergence reduced tall fescue cover less than 5% from the nontreated. Hart et al. (2004) noted quinclorac at 400, 600, and 800 g·ha−1 caused chlorosis to creeping bentgrass, but applications did not reduce establishment from the nontreated. Despite injury from these herbicides to seedling turfgrass, practitioners should consider the benefits of controlling summer annual grasses with herbicides and the potential for enhancing turfgrass competition with other weeds in subsequent growing seasons.

Overall, results suggest applications to creeping bentgrass should be delayed greater than 4 WAS for fenoxaprop at 50 g·ha−1, greater than 4 WAS for metamifop at 400 and 800 g·ha−1, and 3 WAS for metamifop at 200 g·ha−1. Additionally, fenoxaprop applications should be delayed 2 WAS for perennial ryegrass and tall fescue, whereas metamifop could be safely applied at all rates at 1 WAS. These recommendations are based on turfgrass maintained at mowing heights evaluated. Physiological effects of lower mowing height could potentially exacerbate turfgrass injury to these herbicides during establishment. Contrarily, higher mowing heights for grasses such as perennial ryegrass could increase seedling turfgrass tolerance to herbicides and warrant further investigation. Research is also needed to evaluate cool-season turfgrass seedling tolerance to multiple applications of metamifop alone and with other herbicides during establishment.