Sweet corn (Zea mays L.) production is important to the economy of Ontario where nearly 113,000 t of sweet corn are produced on nearly 10,000 ha annually [Ontario Ministry of Agriculture, Food, and Rural Affairs (OMAFRA), 2013]. In 2012, sweet corn had a farm-gate value of $33 million and ranked as the second largest field-grown vegetable crop after tomato in Ontario in terms of farm-gate value (OMAFRA, 2013). Effective weed control is important for sweet corn production. The number of herbicides labeled for sweet corn lags behind that of field corn in Ontario mainly as a result of tolerance concerns for some sweet corn hybrids. More research is needed to identify preemergence (PRE) and postemergence (POST) herbicides that provide broad-spectrum weed control in sweet corn production.

The experiments were arranged in a split-split plot design with four replications. The main plots were application timing (PRE and POST). The subplots were treatments, which included a non-treated control, isoxaflutole at 105 and 210 g a.i./ha alone, and in pre-mixed combination with cyprosulfamide (Tables 1 to 3). The sub-subplots were sweet corn hybrids and consisted of four rows of ‘Merit’, ‘GH 4927’, ‘BSS 5362’, and ‘GG 741’ hybrids spaced 75 cm apart in rows that were 8 m long at Ridgetown and 10 m long at Exeter. The sweet corn was thinned to 50,000 plants/ha 1 week after emergence. All plots were kept weed-free using interrow cultivation and hand hoeing as needed.

Injury of four sweet corn varieties as a function of herbicide treatment.z 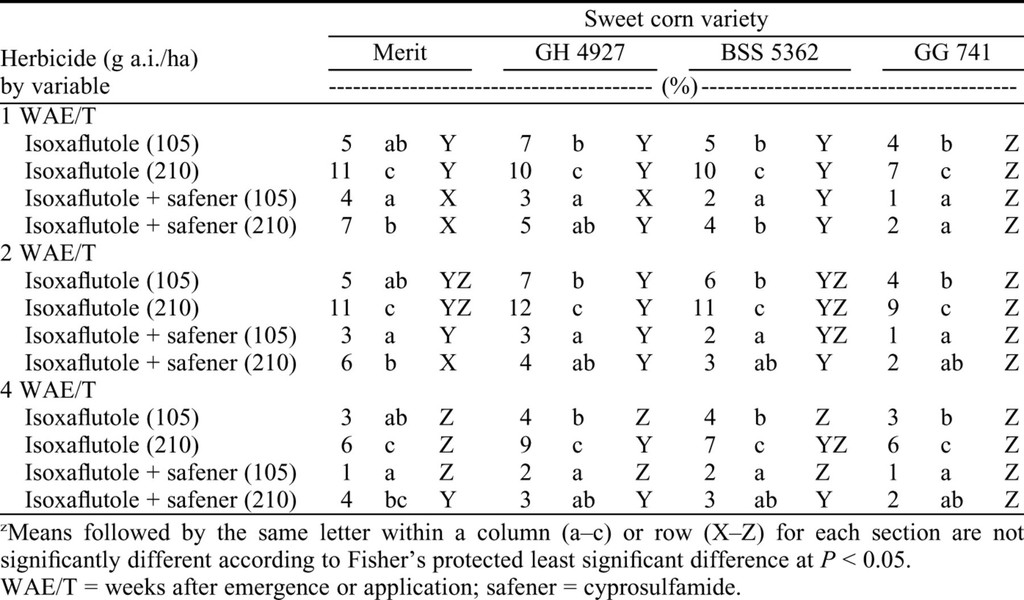 Injury of sweet corn at two application timings as a function of herbicide treatment.z 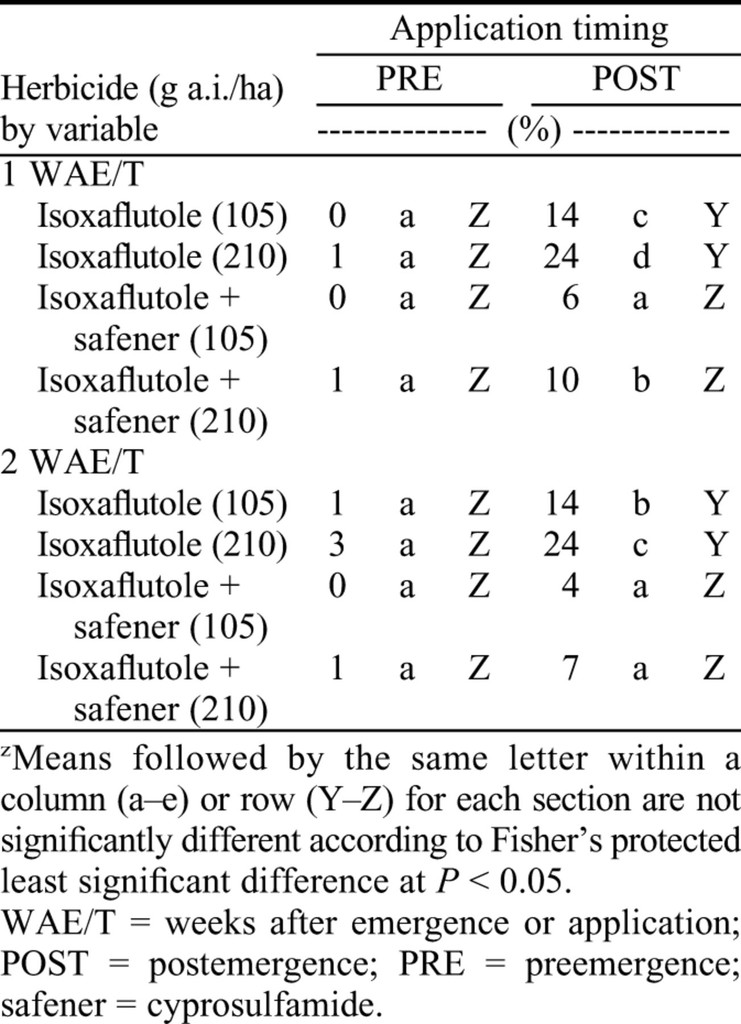 Sweet corn injury was visually estimated on a scale of 0 (no injury) to 100% (complete plant death) at 1, 2, and 4 weeks after crop emergence for PRE treatments or after herbicide application for POST treatments (WAE/T). Corn height was measured for 10 plants per plot at 3 WAE/T and averaged. Sweet corn was harvested by hand based on the maturity of each hybrid and the total cob weight at maturity and number were recorded as were the marketable cob weight and number after sorting.

Data were analyzed as a three-way factorial using PROC MIXED in SAS 9.2 (SAS, 2008). Sweet corn hybrid, herbicide treatment, and application timing as well as their interactions were considered fixed effects, whereas environment (year–location combinations), interactions between environments and the fixed effects, and replicate nested within environment were considered random effects. Significance of fixed effects were tested using F-tests and random effects were tested using a Z-test of the variance estimate. Environments were combined for a given variable if the environment by variety by herbicide by timing interaction was not significant. The UNIVARIATE procedure was used to test data for normality and homogeneity of variance. For all injury ratings, the untreated control (assigned a value of zero) was excluded from the analysis. However, all values were compared independently to zero to evaluate treatment differences with the untreated control. To satisfy the assumptions of the variance analyses, injury 1, 2, and 4 WAE/T were square root-transformed. Treatment comparisons were made using Fisher’s protected least significant difference at a level of P < 0.05. Additionally, an orthogonal contrast was constructed to compare sweet corn response to isoxaflutole alone vs. isoxaflutole plus safener for those variables where significant interaction effects were not observed and main effects were significant [i.e., for height, cob weight, and number (total and marketable) and yield (total and marketable)]. Data compared on the transformed scale were converted back to the original scale for presentation of results.

‘GH4927’ produced the smallest cobs—total and marketable—of the four hybrids examined. Among the sweet corn hybrids evaluated, ‘GG 741’ had the greatest total number of cobs followed by ‘BSS 5362’ followed by ‘Merit’ and then ‘GH 4927’ (Table 3). However, there was no difference in marketable cob number of various sweet corn hybrids evaluated. Marketable cob weight was reduced where isoxaflutole was applied alone at 210 g a.i./ha, but the isoxaflutole + cyprosulfamide treatment did not reduce marketable cob weight. Herbicide treatment did not have any detrimental effect on total or marketable cob number regardless of the herbicide application rate or timing (Table 3). Other studies have shown that cob weight of susceptible hybrids can be reduced up to 67% (Soltani et al., 2005). Contrasts indicated that cob weight, but not cob number, was less where isoxaflutole had been applied without cyprosulfamide (Table 3).

Cyprosulfamide safened isoxaflutole in all sweet corn hybrids evaluated. ‘Merit’, ‘GH 4927’, ‘BSS 5362’, and ‘GG 741’ sweet corn were sensitive to isoxaflutole applied PRE or POST at 105 and 210 g a.i./ha. The injury was consistent, especially at the 2× rate and reduced sweet corn height along with total and marketable yield. Conversely, ‘Merit’, ‘GH 4927’, ‘BSS 5362’, and ‘GG 741’ were tolerant to isoxaflutole + cyprosulfamide applied PRE or POST at 105 and 210 g·ha−1. Initial injury was transient and had no negative effect on sweet corn height, total cob number, marketable cob number, and total and marketable yield. As the rate of isoxaflutole + cyprosulfamide was increased from 1× to 2× of the labeled field corn rate, there was generally no negative effect on any sweet corn hybrids.