Container-grown Cycas micronesica seedlings were purposefully infested with Aulacaspis yasumatsui and then installed at 0, 75, or 150 cm above the ground to investigate effects of infestation height on predation by Rhyzobius lophanthae. Significantly more scales on elevated seedlings were attacked by the predator. Our results indicate that lower predation at ground level by R. lophanthae may partly explain why the predator is not effectively controlling this armored scale epidemic on Guam. Ephemeral outbreaks of A. yasumatsui documented in quarterly surveys from Sept. 2006 until Aug. 2012 confirm the inadequate biological control. Our results illuminate the importance of fully evaluating the reliance on an alien predator as a solo biological control agent for an alien pest.

Container-grown Cycas micronesica seedlings were purposefully infested with Aulacaspis yasumatsui and then installed at 0, 75, or 150 cm above the ground to investigate effects of infestation height on predation by Rhyzobius lophanthae. Significantly more scales on elevated seedlings were attacked by the predator. Our results indicate that lower predation at ground level by R. lophanthae may partly explain why the predator is not effectively controlling this armored scale epidemic on Guam. Ephemeral outbreaks of A. yasumatsui documented in quarterly surveys from Sept. 2006 until Aug. 2012 confirm the inadequate biological control. Our results illuminate the importance of fully evaluating the reliance on an alien predator as a solo biological control agent for an alien pest.

Aulacaspis yasumatsui Takagi (Hemiptera: Sternorrhyncha: Diaspididae) is a cycad-specific armored scale that invaded Guam in 2003 (Marler and Muniappan, 2006). This pest has combined with several other invasive insects to threaten Cycas micronesica K.D. Hill and Cycas revoluta Thunberg trees. These two Cycas species were widely planted throughout the urban landscape before the pest invasions, and the regionally endemic C. micronesica was a dominant forest species. Coccobius fulvus Compere & Annecke (Hymenoptera: Aphelinidae), an endoparasitoid, and the beetle Rhyzobius lophanthae Blaisdell (Coleoptera: Coccinellidae), a predator, were introduced as efforts to establish a biological control program (Moore et al., 2005). The endoparasitoid failed to establish despite multiple introductions, but the predator proliferated.

Cycas micronesica plant mortality after the scale invasion was epidemic, but slowed down after the widespread establishment of R. lophanthae (Marler and Lawrence, 2012). After seven years, the biological control by this predator has not proven to be completely effective, although the beetle is widespread and both adults and larvae feed on A. yasumatsui (Fig. 1). The decline in population of the endemic C. micronesica elicited an endangered status by the International Union for Conservation of Nature by 2006 (Marler et al., 2006), and continuing mortality predicts extirpation from local forests by 2019 (Marler and Lawrence, 2012). A few C. micronesica and C. revoluta trees linger in commercial and home landscapes, but they do not display their former aesthetic appeal and are thus less valuable in the horticulture trade.

In attempts to understand why R. lophanthae has not been completely effective in the urban and natural landscapes, we have noted that the beetle does not effectively protect C. micronesica seedlings from the armored scale (Marler and Terry, 2011). An understanding of the causal effects of the limited predation is required to inform ongoing horticultural management and biological control strategies. Toward that goal, our objective was to determine scale predation on seedlings positioned at the natural ground level and artificially elevated to the height of mature tree leaves. To improve interpretation, we monitored pest and predator incidence two years before and four years after the elevation experiment at the study site.

We initiated quarterly surveys to determine the extent of A. yasumatsui infestation and presence of R. lophanthae within a C. micronesica population on the east coast of Guam in Sept. 2006. We selected a forest fragment that was positioned between a private golf course and a heavily trafficked forest trail maintained by the golf course. This ecotone served as a source of natural enemies and/or pests that influenced maintenance procedures of landscape managers for this golf course and many home landscapes adjacent to the fragment. During each survey, the cycad trees along a 115-m transect were observed. There were 173 mature trees initially within the transect, and 18 trees remained at the final observation period in Aug. 2012. First, a ranking of 0 to 5 was assigned with 0 indicating no observed A. yasumatsui and 5 indicating acute levels of infestation. This ranking was defined by integrating the number of leaves with scale infestation and the observed scale density within the stem and leaf infestations. Second, the number of adult R. lophanthae beetles observed on one leaf per tree was recorded.

Two-year-old C. micronesica seedlings growing in 2.6-L containers were moved from an open nursery to a Lucite screen cage in July 2008. Each seedling had two to three 30- to 45-cm long leaves. We placed C. micronesica leaves infested with A. yasumatsui on top of the seedlings for several hours to allow scale crawlers to infest the containerized plants. We repeated this procedure several times and then kept the cage closed to exclude R. lophanthae predators. When the scale density reached ≈50 scales per cm2, we initiated the field test.

A total of 30 scale-infested container-grown seedlings were transported to the study site that was used for the quarterly surveys on 5 Sept. 2008. At each of 10 locations separated by a minimum of 20 m, we installed one containerized seedling at ground level, one containerized seedling at 75 cm height, and one containerized seedling at 150 cm height. The ground-level seedlings were inserted into a hole such that their position was natural, and none of the leaflets touched the ground or adjacent vegetation. Containers for the elevated seedlings were affixed to sapling trees by wire. Approximately once per week from 11 Sept. until 30 Oct., up to seven random leaflets per seedling were harvested, placed in plastic bags, and transported to the Univ. of Guam. Toward the end of the experiment, all leaflets on some of the seedlings had been harvested. Male and female scales and scales preyed on were counted under a stereomicroscope by inspecting 10 random 25-mm2 squares per leaflet. Predation was ascertained if the covering of the male or female scale had been chewed open and the insect removed. There were no other scale predators in the system, so predation was restricted to R. lophanthae.

Statistical analysis was performed using R (R Development Core Team, 2011). We performed a linear regression of the ratio defined by total scales divided into predated scales as a function of height aboveground. We tested the zero slope null hypothesis using a permutation test using 10,000 Monte Carlo simulation trials. In each trial, values for the height variable were shuffled, ratio of predated scale covers at each height was recalculated, and a linear regression of the ratio as a function of height aboveground was performed. The number of trials yielding a slope exceeding the observed slope was used as an estimate of the P value associated with the null hypothesis.

Scale infestations of C. micronesica trees and observed presence of R. lophanthae adults exhibited classic predator–prey numerical response cycles from 2006 until 2012 (Fig. 2). Well after R. lophanthae was established in the habitat, outbreaks of the cycad pest occurred, as evidenced by scale outbreaks in mid-2009 and late 2011. These long-term trends indicate that biological control is successful on some levels but that outbreaks of the pest are still possible. The nature of these cycles with pest outbreaks and suppression and how they fit into a successful biological control program present difficult questions to answer.

We examined a total of 23,282 scales on leaflets sampled from cycad seedlings positioned at ground level, 75 cm, or 150 cm above the ground. Damage to A. yasumatsui scale covers by R. lophanthae increased with height (Fig. 3). A linear regression of the ratio of damaged scale covers as a function of height in centimeters yielded a slope of 0.001278 (predation increased ≈13% per meter). A permutation test rejected the zero slope null hypothesis (P = 0.0083). Predation was increased 29% at 75 cm in height and 42% at 150 cm in height above that at ground level.

Vertical stratification in tropical forests is known to influence general arthropod assemblages (Basset et al., 2001, 2003), including beetle assemblages (Stork and Grimbacher, 2006). Generalist predator arthropods are among the examples exhibiting disparity between ground and elevated strata (Beaulieu et al., 2010). Most of the published reports on coccinelid behavior in relation to spatial effects have focused on prey density effects (e.g., Schellhorn and Andow, 2005; Turchin and Kareiva, 1989). However, Ewert and Chiang (1966) and Ulyshen and Hanula (2007) trapped coccinelids during flight to reveal an influence of trap height on number and diversity of predators trapped. We have shown that seed set is not influenced by vertical stratification of C. micronesica female megastrobili, and used the results to infer that Guam’s entomophilous pollinators do not exhibit a preferred vertical strata (Marler and Niklas, 2011). Herein we show that a measurable dichotomy occurs between predation of A. yasumatsui feeding on C. micronesica seedling leaves positioned at ground level and those artificially positioned at 75 and 150 cm above the ground. Reduction of predation near the ground may partly explain why R. lophanthae has not protected small cycad plants from lethal infestations of the armored scale since the 2005 introduction of the predator.

Cycas revoluta and C. micronesica were prominent elements of the urban landscape before the invasion of this armored scale. Today, less than a decade later, they are rarely seen as a result of ongoing mortality. Furthermore, the unsightly appearance and poor health of the lingering specimens have removed the horticultural appeal of these trees. Guam experiences more tropical cyclones than any other region of the United States (Marler, 2001). The ability of these Cycas species to withstand tropical cyclones with little damage, combined with their resilience to recover quickly after damage by a tropical cyclone, continues to render them as ideal landscape candidates. The nursery and landscape industries will not return to promoting their use, however, until damage by the invasive pest is brought under sustainable biological control.

In the managed landscape and conservation plantings, the use of chemical protection likely will remain mandatory for several years after planting C. micronesica seedlings. However, after the seedlings have gained stature, the established R. lophanthae control may be sufficient to implement an integrated program that relies on the predator control as the foundation supplemented by frequent scouting to identify all nascent A. yasumatsui outbreaks. Expensive chemical protection may therefore be avoided until the surveys indicate the need. Our study is the first to our knowledge that validates a stratification of the interactions among insects and any cycad species.

We have shown that C. revoluta plants harbor A. yasumatsui infestations that are not visible during plant inspections (Marler and Moore, 2010). These cryptic infestations result from an inability of R. lophanthae to access scales hidden within crevices on the plant surfaces (Marler, 2012). Although biological control practitioners have long debated the merits of introducing single vs. multiple agents (see Ehler, 1990), the inability of the established predator to fully protect Guam’s Cycas plants indicates additional biological control is urgently needed on Guam to augment that of the predator. Wiese et al. (2005) likewise reported that the parasitoid Coccobius fulvus did not sufficiently control A. yasumatsui in Miami, FL, as a sole biological control agent.

The causes of reduced scale predation by R. lophanthae near the ground are unknown, but a parasitoid biological control agent may not exhibit these same limitations. Furthermore, because a parasitoid would be much smaller than R. lophanthae, it would likely be better able to access scale infestations within cracks and crevices on C. micronesica and C. revoluta trees.

The extent of Aulacaspis yasumatsui infestation on Cycas micronesica trees within an east coast habitat on Guam (square; 0 = no scales, 5 = heavy infestation) and the number of adult Rhyzobius lophanthae adults observed per leaf (diamond) on the same trees (from Sept. 2006 until Aug. 2012). Mean ± se.

The ratio of Aulacaspis yasumatsui scale covers damaged by Rhyzobius lophanthae in relation to total number of scales as a function of height aboveground. Vertical bars are 95% confidence limits for each estimated ratio. 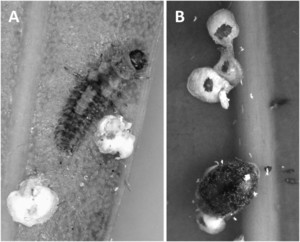 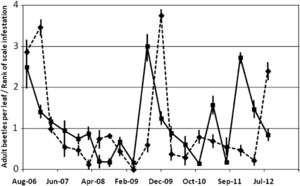 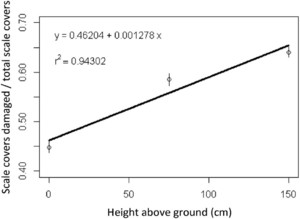