The genus Vitis L. contains two subgenera, Euvitis Planch. (bunch grapes) and Muscadinia Planch. (muscadine grapes). The muscadine grape, Vitis rotundifolia Michx., is the only commonly cultivated member of the Muscadinia subgenus. The muscadine grape differs from the common bunch grape (Vitis labrusca L., V. vinifera L., and their various hybrids) by the presence of smaller clusters, unbranched tendrils, berries with thick skins, and a unique fruity aroma. Muscadine grapes are an important fruit crop in the southeastern United States where Pierce’s disease (Xylella fastidiosa Wells et al.) and other diseases limit the production of most bunch grape cultivars. ‘Lane’ is a new muscadine grape cultivar released by the University of Georgia College of Agriculture and Environmental Sciences. ‘Lane’ has self-fertile flowers and produces black berries of large size that ripen early in the muscadine harvest season. High soluble solids and excellent berry firmness make ‘Lane’ a good choice for fresh market sales. As a result of its medium yields, ‘Lane’ plantings should probably be restricted to what is required to meet early-season sales.

‘Lane’ originated in Tifton, GA, from a cross of ‘Supreme’ by ‘Tara’ made in 2005 by Patrick Conner at the University of Georgia–Tifton Campus. The pedigree of ‘Lane’ involves mostly University of Georgia-developed germplasm (Fig. 1). ‘Supreme’ has female flowers and produces a black berry with exceptional size and firmness (Conner, 2009). ‘Tara’ has self-fertile flowers and produces bronze berries with dry pedicel scars that ripen early in the muscadine harvest season (Conner, 2009; Lane, 1993). The original ‘Lane’ vine first fruited in 2007. Because of its self-fertile flowers, early harvest date, excellent flavor, and the characteristic of the flesh adhering to the skin, it was propagated for further trials as Georgia 5-1-45.

Vines of ‘Lane’ have self-fertile flowers and moderate vigor and productivity. In the Tifton and Watkinsville trials where vines were 3 m apart and trained to a 1.5-m high bilateral cordon, vines reached the wire and most of the cordons were established in the first year. Leaves average 10 cm in length and 8.5 cm in width. Lateral canes are semidrooping and usually grow 1 m or more in a season in Tifton, GA. Typical cane diameter is ≈3 to 12 mm and internode length ranges from 3 to 6 cm. Yields from ‘Lane’ were lower than the other self-fertile cultivars tested (Table 1). The reduced cropload was likely the result of fewer canes being produced as well as a smaller cluster size. ‘Lane’ did not increase in yields after vines had extended down wire to form the main cordons in Year 3, whereas ‘Tara’ and ‘Nesbitt’ continued to increase in yield. This is despite the fact that vine vigor, as measured by trunk caliper, was similar among the three cultivars (Table 1). Altered pruning may be necessary to optimize yield potential in ‘Lane’, perhaps by increasing the number of buds left on the vine.

Vine caliper (mm) and yield (kg/3-m vine) of self-fertile muscadine cultivars in Tifton, GA, in the third, fourth, and fifth years of fruiting.

Harvest date for ‘Lane’ is very early corresponding to the last week of July or first week of August in Tifton, GA. This is ≈10 to 14 d before ‘Supreme’, the primary black-fruited fresh-market muscadine grown in south Georgia. At maturity, the berries of ‘Lane’ are round and average 11.0 g in weight and 26.1 mm in diameter (Table 2) with four seeds per berry. Berry size of ‘Lane’ is similar to that of other commercially used self-fertile cultivars such as ‘Nesbitt’ and ‘Tara’ and the industry-leading female cultivar, Fry, but is smaller than the very large-fruited ‘Supreme’ (Table 2). The color of ‘Lane’ berries is very dark purple to near black at peak ripeness with inconspicuous lenticels, and berries are well colored even near the pedicel attachment point (Fig. 2). Berries have an excellent soluble solids content of 17.6% (Table 2) and are noticeably sweeter than other cultivars early in the harvest season. Like its female parent, ‘Supreme’, ‘Lane’ has a very firm flesh texture, and ‘Lane’ berries hold their firmness well during storage (Table 3). Some skin tearing around the pedicel scar occurs, similar to the other cultivars tested (Table 2), but the firmness of the flesh decreases the amount of juice that leaks from the injury.

Flower and fruit attributes of ‘Lane’ and standard muscadine cultivars at Tifton, GA, in years 2010–12.

‘Lane’ is recommended as an early-season black muscadine for the fresh market. Although ‘Lane’ berries are smaller than ‘Supreme’, berry size is similar to most other successful fresh-market cultivars. Appearance of ‘Lane’ in clamshells is excellent as a result of a consistent berry size and very dark, evenly colored berries. As a result of its lower yields, ‘Lane’ is only recommended for the early market, before other black muscadines become available. Currently, growers in south Georgia enter the early market by picking the very first berries to ripen on ‘Supreme’. This requires multiple harvests of ‘Supreme’ resulting in high labor costs. ‘Lane’ ripens relatively uniformly and can be harvested with two pickings at the beginning of the season. Growers could then move into ‘Supreme’ as the main season cultivar when a greater percentage of berries is ripe. The similar flesh quality between ‘Lane’ and ‘Supreme’ should facilitate their use in the same market. Although no cold damage has been observed in the south Georgia or Watkinsville, GA, trials, ‘Lane’ needs to be trialed more thoroughly in northern muscadine production regions before large plantings are made in these locations. ‘Lane’ is easily propagated by softwood cuttings rooted under mist during June and July.

Ripe berries of ‘Supreme’ and ‘Lane’ muscadine in pint clamshells. 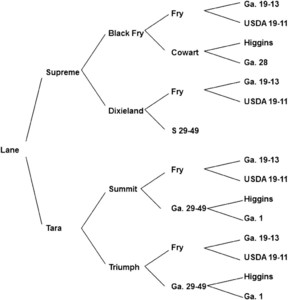 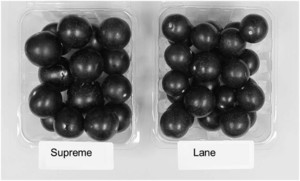