‘Dilbay’ is an early-maturing table apricot (Prunus armeniaca L.) cultivar developed from the Multi-Purpose Apricot Breeding Program at the Inonu University, Malatya, Turkey. ‘Dilbay’ is suitable for fresh consumption because it has perfect fruit quality, high productivity, and a pleasant orange color on its peel and flesh. ‘Dilbay’ is well adapted to the Malatya region, the main apricot-producing area in the world. ‘Dilbay’ has high (greater than 14%) soluble solid content and moderate acidity and oval-shaped fruit with red blush covering 30% to 35% of the fruit skin.

‘Dilbay’ was developed from a controlled cross at the Inonu University, Multi-Purpose Apricot Breeding Program (Anonymous, 2009; Asma, 2007). The parents of ‘Dilbay’ are ‘Hacıhaliloğlu’, a Turkish cultivar of unknown origin and most commonly grown for dried apricot production in Turkey, and ‘Stark Early Orange’, a cultivar originating from North America with unknown origin and known for its tolerance to Sharka disease caused by plum pox virus (PPV).

The primary evaluation for seedling lines is made and the line ‘44-2005-01’ is selected as a promising line for further observation. The buds from this selection were grafted on 2-year-old apricot seedlings and planted in five replications. The reference cultivars Stark Early Orange, Hacihaliloglu, Ninfa, and Hasanbey were also included for comparison purposes. ‘Dilbay’ and reference cultivar trees were cultivated in the same orchards under typical orchard management practices in Malatya. The data were collected for four consecutive years from 2007 to 2011. The data from 2010 were not included in the evaluation as a result of a late frost that significantly affected trees.

The tree growth habit of ‘Dilbay’ is upright and vigorous. The growing shoot tip presents anthocyanin coloration in springtime. One-year-old branches are red–brown. The leaves are large, dark green in color, and round in shape. The shape of the leaf base is truncate, the leaf tip is acuminate, and the angle of the tip is acute. Leaf margins are biserrate with a medium tooth. Petioles have two to three small glands. The leaf blades were found to average 93.53 ± 6.9 mm in length and 79.34 ± 6.7 mm width with petioles of 42.58 ± 3.9 mm in length and 1.66 ± 0.2 mm width when sampled in Aug. 2011.

Sharka, caused by PPV, is an important disease for plum, apricot, cherry, and peach as well as other Prunus species. It is known that the apricot cultivars from the European ecogeographical group are susceptible to Sharka (Karayiannis et al., 2008). There are reports indicating that several apricot cultivars of North American origin such as ‘Stella’ and ‘Stark Early Orange’ are resistant to Sharka (Letbetter, 2008). Resistance to PPV is a major objective in many apricot breeding program and several resistant cultivars such as ‘Rojo Pasion’, ‘Mirlo Blanco’, ‘Mirlo Anaranjado’, ‘Mirlo Rojo’, and ‘Moxient’ have recently been developed (Egea et al., 2004, 2010; Martinez-Calvo et al., 2011). Although Sharka detections have been reported in several regions of Turkey, no economically important epidemics have occurred to date. ‘Dilbay’ has been evaluated for PPV resistance using molecular markers and no resistance was observed, similar to the Turkish parental variety, ‘Hacıhaliloğlu’ (Ulubaş-Serçe, unpublished data). 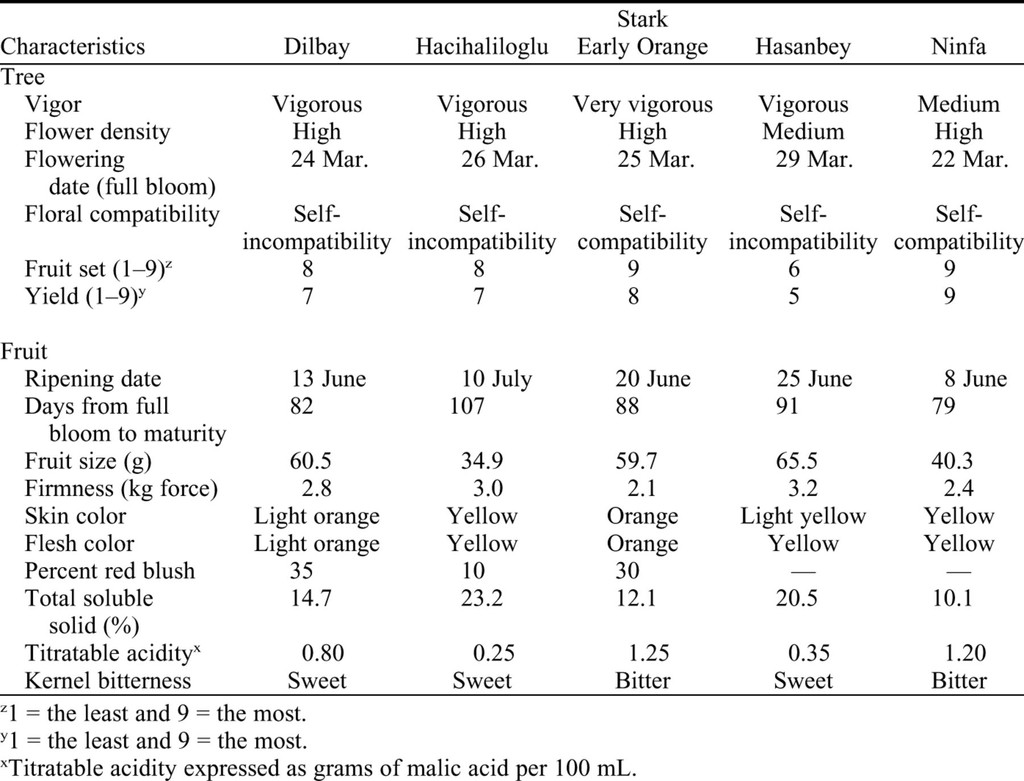 When analyzed by the method proposed by Paydas et al. (2006), flowers of ‘Dilbay’ average 31 anthers and 3.250 to 3.450 pollen grains per anther. The pollen viability is 72% to 78% using a triphenyltetrazolium chloride test. When tested on media with 1% agar and 15% sucrose at 20 °C, in vitro pollen germination is 66% to 72%. Although flowers of ‘Dilbay’ produce a high amount of pollen, they were found to be self-incompatible by the methods proposed by Burgos et al. (1993). ‘Kabaaşı’ and ‘Turfanda’ can be used as pollinators for ‘Dilbay’ because they flower about the same time and produce an adequate amount of pollen.

Under Malatya ecological conditions, the average first harvest date for ‘Dilbay’ was on 13 June. In the same study, the first harvest for ‘Ninfa’ was on 8 June and on 10 July for ‘Hacıhaliloğlu’. The number of days from full bloom to harvest averaged 82 d for ‘Dilbay’, 88 d for ‘Stark Early Orange’, and 107 d for ‘Hacıhaliloğlu’. This period was determined as 79 d for ‘Ninfa’, which was 5 d less than ‘Dilbay’. Regardless of this early maturation ability, ‘Dilbay’ is a much superior cultivar when compared with ‘Ninfa’ based on the fruit quality characteristics.

In each year of the study, 30 fruits from each replication were harvested at commercial maturity. The experiment had three replications. The fruits of ‘Dilbay’ are elliptic and freestone with sweet seeds. The fruit skin is glabrous. The average fruit weight was 60.6 g. Among the other cultivars tested, ‘Hacıhaliloğlu’ had 34.9-g fruits, whereas the fruit weight of ‘Hasanbey’ was 65.5 g. Average fruit flesh firmness was 2.8 kg in ‘Dilbay’, 2.1 kg in ‘Stark Early Orange’, and 2.4 kg in ‘Ninfa’. Skin cracking and pit burning were not observed in any of the cultivars tested. Skin cracking and pit burning are not commonly observed in apricot cultivars grown in Malatya.

‘Dilbay’ was certified for propagation by the Cultivar Registration and Seed Certification Center of Turkey on 28 Aug. 2009. The registration of ‘Dilbay’ was also completed by the Ministry of Food, Agriculture and Livestock. Budwood of ‘Dilbay’ is available from Inonu University, Apricot Research Center. 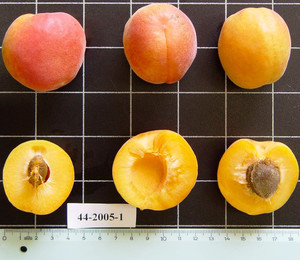