Avocado (Persea americana Miller) is a significant and nutritious fruit crop grown in both the tropic and subtropical regions in many parts of the world. World production of avocados in 2008 was estimated at ≈3.2 million tons with the world leader being Mexico followed by Indonesia, Columbia, Brazil, the United States, Chile, Peru, China, and South Africa (Imbert, 2008). Within the United States, California dominates avocado production (≈90%) and in the 2010–2011 season, the crop was valued at $460,209,682 (California Avocado Commission annual report, <http://www.avocado.org>). Three botanical races of P. americana have been domesticated from their putative centers of origin: the Mexican race (P. americana var. drymifolia), the Guatemalan race (P. americana var. guatemalensis), and the West Indian race (P. americana var. americana) (Bergh and Ellstrand, 1986; Popenoe, 1941). Each race possesses distinct agronomic characteristics such as the shape, taste, and color of fruit; timing and length of fruit set; cold-hardiness; disease resistance; and salinity tolerance (Bergh and Lahav, 1996) However, cross-fertility among and within the botanical races has led to extensive genetic variability within P. americana and many extant cultivars are racial hybrids, thus possessing variable characteristics (Ashworth and Clegg, 2003; Davis et al., 1998; Douhan et al., 2011). This extensive genetic variability is important because it potentially provides ample germplasm for breeders when developing rootstocks or scions with desirable characteristics (Bender and Whiley, 2001).

Phytophthora cinnamomi Rands. is the most serious disease of avocado worldwide (Zentmyer, 1980) and has actually eliminated commercial production in many areas in Latin America and is the major limiting factor of production in Australia, South Africa, and California (Ploetz et al., 2002). In California, 60% to 75% of California groves are affected by the disease with estimated yearly losses of over $40 million (Coffey, 1992). The use of tolerant rootstocks to control Phytophthora root rot (PRR) of avocado has long been proposed as the ultimate method for managing the disease (Zentmyer, 1957, 1963) and research on developing PRR-tolerant rootstocks has been a major focus of avocado research at the University of California Riverside (UCR) since the 1950s. The UCR program has developed or been actively involved in the development of most of the clonal rootstocks that are now used in the global avocado industry.

The maternal parents of ‘Zentmyer’, ‘Uzi’, and ‘Steddom’ are believed to be ‘Thomas’, ‘G6’, and ‘Toro Canyon’, respectively, based on growth habit, fruit characteristics, and notes from previous researchers working on scion and rootstock development at UCR. The paternal parents of these rootstocks are not known.

The ‘Zentmyer’ (PP4) avocado rootstock is named after George Zentmyer who was a pioneer avocado pathologist at UCR and a collector of avocado germplasm worldwide. ‘Zentmyer’ is an extremely vigorous, highly durable cultivar that is tolerant of PRR under most conditions. It is generally more salt-tolerant than ‘Thomas’ but less so than ‘Dusa’ and therefore is not recommended for locations where salt is a problem. This cultivar when grafted with ‘Hass’ also often does not yield well under non-root rot conditions in comparison with ‘Steddom’ and ‘Uzi’ under California conditions. Therefore, it is recommended that the ‘Zentmyer’ rootstock should be used primarily in replant situations were root rot-infested soils are a problem but salinity is not.

The ‘Uzi’ (PP14) avocado rootstock is named after Uzi Afek, a scientist from the Volcanic Center in Bet-Dagan, Israel. ‘Uzi’ is an extremely vigorous and fast-growing rootstock that is capable of supporting a ‘Hass’ tree growing to 15 ft in 2 years. It is highly tolerant to PRR and its yields are generally high and consistent. ‘Uzi’ is very susceptible to salt based on leaf burn symptoms, but this does not seem to affect either growth or yield of the ‘Hass’ variety based on field trials to date.

‘Steddom’ (PP24) is an avocado rootstock that has a high tolerance against PRR. It is a moderately fast-growing rootstock, generally larger than ‘Thomas’ but smaller than ‘Dusa’. Steddom’ has good salt tolerance, especially compared with ‘Thomas’, and appears to be an all-around excellent rootstock with moderate stature and excellent yield when grafted to ‘Hass’.

‘Zentmyer’, ‘Uzi’, and ‘Steddom’ rootstock cultivars were initially selected for PRR tolerance based on ≈2 years of screening under greenhouse conditions. The seeds were planted into vermiculite beds (36 × 36 × 15 cm) and after the 5 or 6 weeks, the “mother seeds” were removed from the seedlings, which were then allowed to grow only relying on their own root systems for a total of 8 to 9 weeks. After this time period, the plants were inoculated by spreading millet seed colonized by P. cinnamomi throughout the vermiculite in the planting beds. At approximately the 16th week, the seedlings were removed from the vermiculite and visually rated for percentage of healthy roots remaining. The seedlings were then transplanted into half-gallon pots using a 50/50 mix of vermiculite and special UC mix (0.38 m3 #30 silica, 0.38 m3, peatmoss, 1.70 kg dolomite, 0.11 kg KNO3, 1.1 kg phosphate). The plants were grown for an additional 8 to 9 weeks before the second evaluation of the root system. This process was repeated every 6 to 8 weeks, each time adding P. cinnamomi inoculum to the soil mix.

The selected varieties, which showed tolerance to PRR, were then allowed to grow until enough budwood was available to produce a disease-free mother tree of each variety by grafting a cutting onto a “nurse” seedling. Two trees of each selected variety were planted into a field plot at South Coast Field Station in Irvine, CA, and were grown for at least 2 to 3 years to produce enough budwood to create clonal rootstock trees grafted to ‘Hass’ scions for field testing.

Field tests of all rootstocks were conducted directly on the properties of California avocado growers who agreed to cooperate with the rootstock breeding program at UCR. All attempts were made to use land that had PRR-infested soil based on the grower’s assessment and based on our own observations of PRR symptoms in the surrounding area. Isolations of P. cinnamomi were also made from soil and roots within the field trials to determine that the pathogen was present. However, some of the trials had little to no disease pressure that affected the analyses as described below. Clonal rootstocks grafted to ‘Hass’ were purchased from Brokaw Nursery, Inc., Saticoy, CA, or C & M Nursery, Nipomo, CA, and placed in the field plots in a randomized complete block design ideally consisting of 20 blocks with up to 10 clonal rootstock selections, resulting in 200 trees per trial. However, some trials contained smaller blocks and replicates resulting from the limited availability of land and/or trees for any given year. ‘Thomas’ was originally used as a tolerant rootstock control because it was previously released as a PRR-tolerant rootstock. However, starting in the late 1990s, a more tolerant rootstock from South Africa (‘Dusa’) became available and was used as a second control for many of the trials (Kremmer-Köhane and Köhane, 2007).

The trees were allowed to grow for 1 year and evaluations began the next year for all trials. Trees were rated visually for health on a scale of 0 to 5 with 0 being healthy and 5 being dead. Tree canopy was determined by measuring the height and width of each tree and calculated using the Eq. 4.189 × (w2/2) × (h/2). A visual rating for salt damage was made based on a scale of 0 to 5 with 5 being severe leaf tip burn. Yield data were usually collected beginning the third year after planting. Each tree within each plot was individually picked and weighed.

Statistical comparisons of the five rootstocks were performed using the PROC MIXED analysis from SAS (SAS Institute, Inc., Cary, NC). This mixed model used location as a random effect. We analyzed data from 18 fields (locations). In the analyses, plots with rootstocks planted in different years were treated as different locations. The fixed factors in the mixed model were “rootstock” with five levels, including three new rootstocks (‘Zentmyer’, ‘Uzi’, and ‘Steddom’) and two controls (‘Thomas’ as the low control and ‘Dusa’ as the high control), and “region,” which included two levels, North and South production zones, where the rootstock plots were located. Northern productions zones included Ventura, Santa Barbara, and San Luis Obispo Counties and Southern production zones included San Diego, Orange, and Riverside Counties. The variables tested were tree size (canopy volume), tree rating (for root rot resistance), salt rating, and yield. A separate analysis of each variable was made for each growth year (age of the plot at time the data were taken). Data were analyzed beginning at the third year after the trees were planted in each plot and continued until the plot was ended. Where there was a significant interaction between rootstock and region (North and South), a separate analysis was made of each region to determine if the rootstock variable was significantly different within the region. Where the effect of rootstock is significant, comparisons of the three rootstocks were made with ‘Dusa’ and with ‘Thomas’.

Tree canopy volume from plots in the southern California avocado regions of Riverside and San Diego Counties for growth Years 3 and 4. 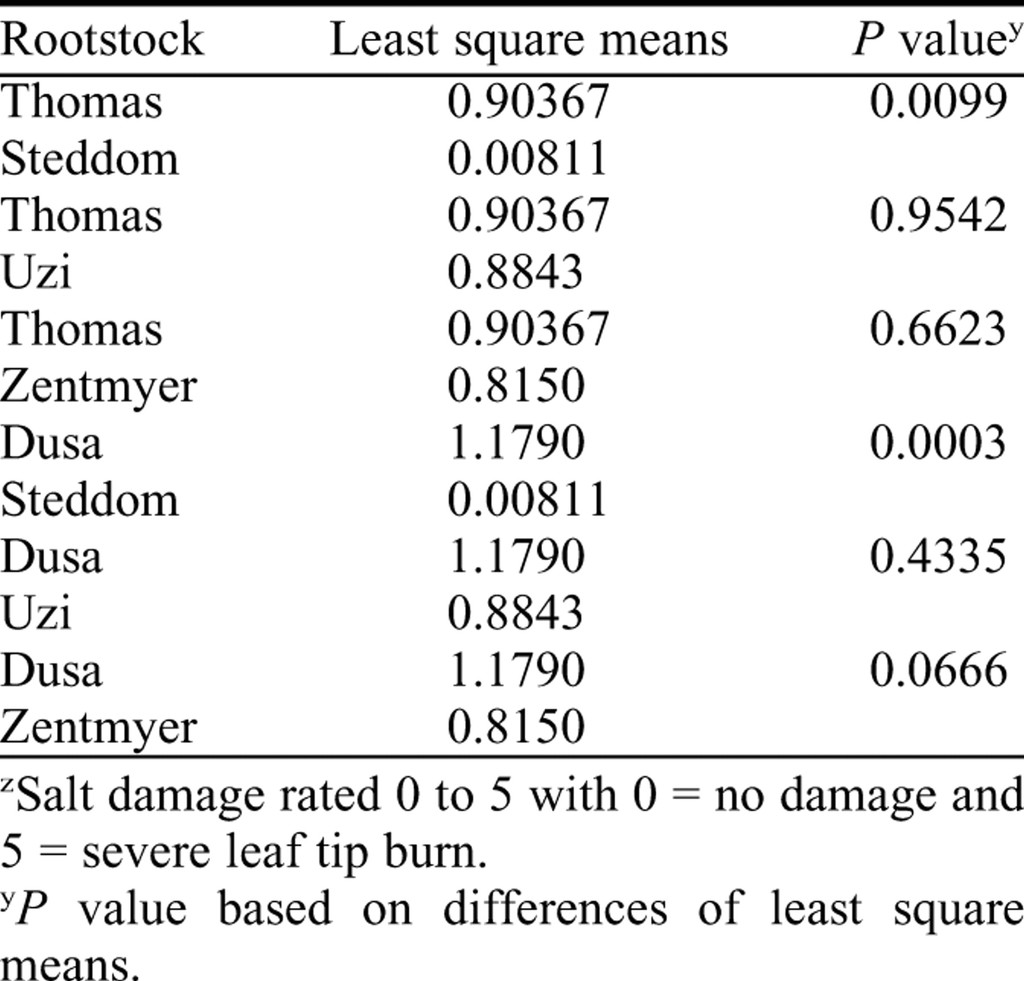 Salt damage from field plots in the southern California avocado regions of Riverside and San Diego Counties in growth Years 3, 4, and 5.z

There were no significant region differences in yield data in all 3 growth years and no significant rootstock differences in the fourth growth year. The yields of ‘Uzi’ and ‘Steddom’ were significantly greater than that of ‘Thomas’ in the third and fifth growth years and of ‘Dusa’ in the third year, whereas similar to ‘Dusa’ in the fifth year. ‘Zentmyer’ produced only slightly better than ‘Thomas’ either year but the differences were not significant. ‘Zentmyer’ also performed slightly worse than ‘Dusa’ in the third year but significantly lower than ‘Dusa’ in the fifth year (Table 5). The yield data for ‘Zentmyer’ was not significantly better than ‘Thomas’ in some of the specific comparisons, but this is most likely because ‘Zentmyer’ often does not yield well in locations with little root rot pressure. This was a problem for some of the field plots and is the most likely explanation of our results. However, Table 6 shows the average yields and canopy volumes from all of the rootstock trials combined, which shows that all of the rootstocks performed better than ‘Thomas’.

However, based on our overall observations, as disease pressure increased, ‘Zentmyer’, ‘Uzi’, and ‘Steddom’ on average yielded significantly better than ‘Thomas’. ‘Zentmyer’, ‘Uzi’, and ‘Steddom’ also usually performed comparable to ‘Dusa’, which is the most popular clonal tolerant rootstock that is available today. With this release, California avocado growers and growers throughout the world will now have more options in choosing tolerant rootstock cultivars to determine which ones perform better under their own growing conditions. The University of California has recently released this germplasm for commercial use; these cultivars are currently being patented.

No graft incompatibility issues have been found for any of the rootstocks grafted to ‘Hass’ under the UCR breeding program. This is not surprising because most avocados in Persea americana are compatible, including grafts between and within races of P. americana and grafts between and within hybrids of this species. Therefore, we are confident that this is an issue that will not be a problem in the future for older plantings as has been found between rootstocks and scions in Citrus for example (Forner et al., 1977).

Two source trees of each variety are currently established at the South Coast Research and Extension Center, Orange County, CA, and they have also been registered with the California Department of Food and Agriculture (‘Zentmyer’ = E901; ‘Uzi’ = E915; ‘Steddom’ = E917). These trees have been determined to be free of the viroid disease caused by ASBVd, commonly known as Sunblotch. Therefore, budwood is available for nurseries that would like to propagate these rootstock varieties and plant patents for each cultivar are currently being processed.