‘WA 38’ (‘Enterprise’ × ‘Honeycrisp’) is a new apple selection from the Washington State University apple breeding program with commercial potential based on its exceptional eating quality, its large fruit size, attractive appearance, and its productivity. It is very attractive with 90% of the skin surface covered by dark red–purple blush over a green–yellow background. It is significantly more crisp and juicy eaten both fresh and out of storage when compared with commercial cultivars. Unlike many existing cultivars, it has little reduction in quality, particularly firmness, after several months in regular cold storage. It ripens in late September in Wenatchee, WA, and its vigor and productivity fall within the range of existing commercial cultivars. Its cut flesh shows very low enzymatic browning, making it suitable for fresh-cut-slice packaging and for use in salads. It is suited to the fresh market both directly off the tree and out of medium- and long-term storage.

‘WA 38’ originated from a cross between ‘Enterprise’ and ‘Honeycrisp’ (Fig. 1) made in 1997 at the Washington State University (WSU) Tree Fruit Research and Extension Center, Wenatchee. Seed were germinated and raised in a greenhouse in 1998. The seedling was transferred to the nursery in May 1998 where it grew until Sept. 1999, when it was budded onto M.9 rootstock. The resulting tree was planted in the Phase 1 seedling evaluation orchard CV12 at WSU’s Columbia View orchard (row 16B, position 75) in Apr. 2001. Fruit from this original budded tree was evaluated in 2002 and 2003. Based on fruit quality, ‘WA 38’ was selected and advanced to Phase 2 evaluation in Oct. 2003. Buds were taken from the seedling tree and propagated onto M.9 rootstock in Sept. 2004. Five trees were planted at each of three Phase 2 sites in central Washington in Apr. 2006. Additional trees were budded in 2006 onto M.9 rootstocks for larger scale Phase 3 plantings in 2008 at four commercial orchard sites in central Washington. ‘WA 38’ was virus-tested and certified material was budded onto virus-indexed MM.106 rootstock for the production of certified propagation material.

‘WA 38’ comes to full-bloom flowering 1 to 2 d after that of ‘Fuji’ in Wenatchee, WA (lat. 47.26° N, long. 120.21° W), typically at the end of April. The number of blossoms per bud ranges from four to six with individual flowers large in size (53.9 mm in diameter). Petals are white with red–purple highlights, Royal Horticultural Society (RHS, 1966, 1986, 1995) 64B. Both surfaces of the sepals are yellow–green (upper are RHS 146C and lower RHS 148D) with tips highlighted red–purple (148D). White pubescence (RHS 155E) is abundant on both upper and lower surfaces. Pollen is viable although S-alleles are as yet undetermined.

‘WA 38’ fruit ripens in late September in Wenatchee, ≈4 weeks after ‘Gala’ and 3 weeks before ‘Fuji’, in ‘Red Delicious’ season. Fruit is large, similar to ‘Fuji’ and larger than ‘Gala’ and round conical in shape with an average equatorial diameter of 8.4 cm and axis length of 7.9 cm. At harvest, fruit has a conspicuous bloom. Skin under color is from the red group (RHS 48A) with overstreak from the grayed purple group (RHS 183B) (Fig. 2). Lenticels are numerous, small, round, and smooth with the skin. Fruit skin is smooth and russet has not been observed. Pedicel is long, averaging 25.7 mm; the pedicel cavity is acuminate in shape and has an average depth of 2.3 cm. The calyx is erect, convergent with downy-textured sepals. Seeds average two per cell, are acute in shape, averaging 4.3 mm diameter by 9.0 mm in length, and are from the brown group RHS 200D. 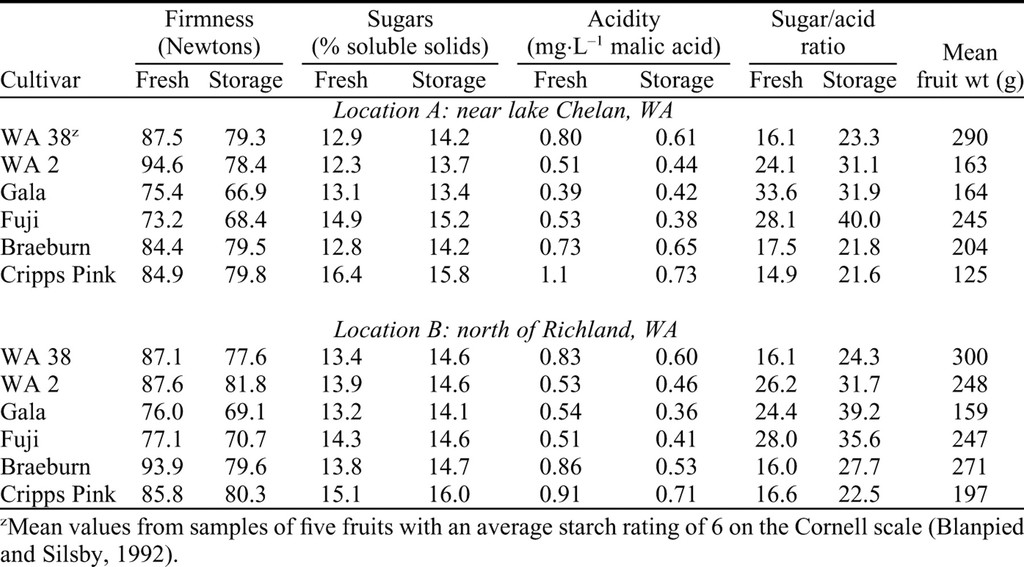 ‘WA 38’ fruit is very crisp, firm, and juicy (Table 2) in texture and has a balanced flavor with a higher acid to sugar ratio than ‘Gala’ and ‘Fuji’ (Table 1), which have low acidity and are typically characterized as bland. Aroma is mild and apple-like and flesh color is RHS yellow–white group 158D. Flesh enzymatic browning is minimal to none after 1 to 2 h as compared with standard Washington cultivars and other breeding selections.

Consumer evaluation scores representing acceptance on a 7-point hedonic scale (1 = dislike extremely and 7 = like extremely) for ‘WA 38’ and ‘Fuji’ fruit of 114 consumers in 2009. 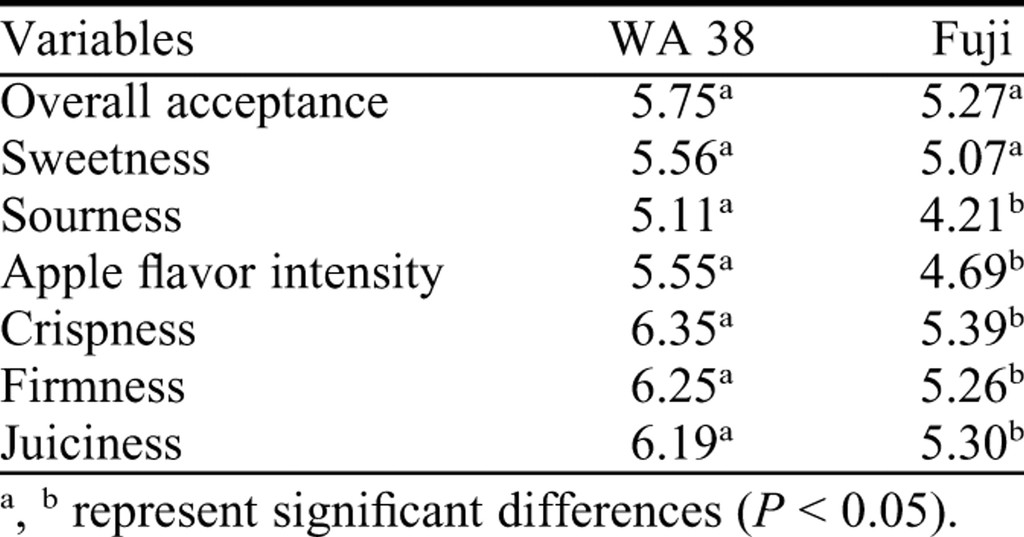 Using a 7-point hedonic scale (1 = dislike extremely and 7 = like extremely), fruits of ‘WA 38’ at room temperature (from the 2008 harvest and stored for almost 4 months in regular atmosphere storage at 1 to 2 °C) were evaluated by 114 untrained apple consumers in Pullman, WA, in Feb. 2009 together with several other breeding selections and ‘Fuji’ as a standard (all from the same storage regime). ‘WA 38’ was rated higher in overall acceptance as well as acceptance of apple flavor intensity, crispness, firmness, and juiciness when compared with ‘Fuji’ (P < 0.05) (Table 2). In addition, slices of fruit of ‘WA 38’ at room temperature [from controlled atmosphere (CA) storage and treated with 1-methylcyclopropene (1-MCP) (Watkins et al., 2000)] were presented to 120 untrained consumers in Spokane, WA, in Mar. 2012 for a direct paired preference test with ‘Gala’ (also CA-stored and 1-MCP-treated). Consumers were asked which of the two apples they preferred overall and which they preferred for the traits of appearance, taste/flavor, and texture. Whole apples were provided to judge appearance. Data were analyzed through comparison with the minimal number of responses required for a two-sided directional difference test (Roessler et al., 1976). The ‘WA 38’ fruit was significantly preferred by consumers for the attributes of appearance and texture (P < 0.05) (Table 3).

Consumer scores indicating the preferred sample in a pair comparing ‘WA 38’ to ‘Gala’ control in 2012.z 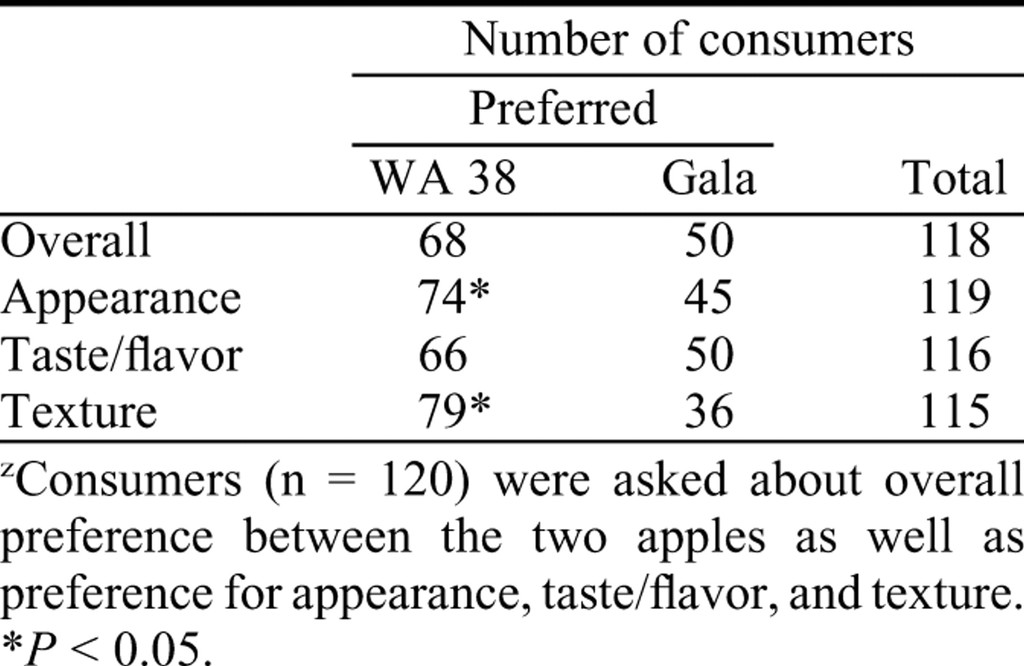 Instrumental and sensory texture analysis (Evans et al., 2010a) showed ‘WA 38’ was comparable in crispness to ‘Honeycrisp’ and ‘WA 2’ in 2009 and 2011 and more crisp than the commercial standard cultivars Golden Delicious, Gala, Cripps Pink, and Fuji (Fig. 3). ‘WA 38’ in comparison with the recently released ‘WA 2’ is later in season, higher in acidity, juicier, similar in crispness, and distinct in appearance being much darker red (Evans et al., 2010b).

The ‘WA 38’ tree is upright and spreading with moderately low vigor. ‘WA 38’ is precocious with spur development beginning on 2-year-old wood. Yield is within the range of other locally grown apple cultivars when correctly managed. ‘WA 38’ is considered hardy for the region (suitable for at least USDA hardiness zone 6b). Bark is grayed-orange (RHS 199A) and smooth with a moderate number of elongated brown lenticels (RHS N200A). Branches are grayed–orange (RHS 176A) with numerous oval, green–white (RHS 157A) lenticels.

Leaves are slightly round in shape with a sharp apex and are upward-folding. The upper surface is leathery with some puckering and a high sheen, whereas the lower surface has a moderately heavy covering of white pubescence (RHS155E). Average blade length (of 10 blades) is 8.1 cm and width is 5.7 cm. The leaf tip is acuminate, its base is rounded, and the margin is serrate with some biserrate regions. Stipules are on average 4.4 mm in length and are present on most petioles; their color is from the yellow–green group (RHS 1146D) and fine pubescence is present on both upper and lower surfaces (grayed–yellow RHS 160D). Both surfaces of the leaf blade are from the yellow–green group (upper RHS 147A and lower RHS 147C). The midvein is prominent, same in color as the leaf blade, with considerable fine pubescence (grayed–yellow RHS 160D) on the undersurface. Mean petiole length is 30.1 mm with an average diameter of 1.7 mm. A shallow groove runs the entire length of the upper surface. Petiole color is yellow–green, RHS 145C for the upper surface and RHS 145D for the lower. Pubescence (grayed–yellow RHS 160D) is fine and abundant over the entire length and circumference of the petiole.

Genotype of ‘WA 38’ and its parents with three polymerase chain reaction-based genetic markers.

‘WA 38’ is heterozygous for the Md-ACS-1 -1/2 gene and homozygous for the Md-ACO-1 -1/1 gene for the ethylene pathway genes of 1-aminocyclopropane-1-carboxylic acid synthase and oxidase, similar to its paternal parent, ‘Honeycrisp’ (Table 4). These genes influence fruit firmness retention (Zhu and Barritt, 2008), the optimum genotypic combination for low ethylene production being Md-ACS-1 -2/2 and Md-ACO-1 -1/1.

A patent has been applied for under the name ‘WA 38’ by the WSU Research Foundation. ‘WA 38’ will be released to Washington State growers in Winter 2012–2013. Participation is restricted to growers who appear on Washington Apple Commission assessment records and have a federal EIN. 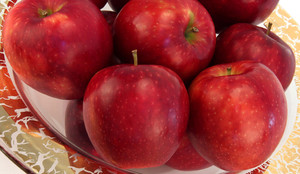 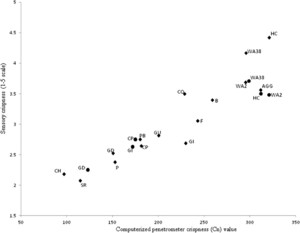