Daily periodicity of (A) airborne Podosphaera xanthii conidia, (B) mean temperature (°C), (C) relative humidity (RH, %), and (D) leaf wetness (0 to 15 scale) at the glasshouse and the polyethylene greenhouse. Models were fitted using nonparametric regression (PROC GAM) to relate the time of day (h) to conidial concentrations and weather variables to illustrate hourly patterns over the course of the entire experiment. (E) The number of times that a worker or workers entered the greenhouse for each time of day. Note differences in the y-axes. 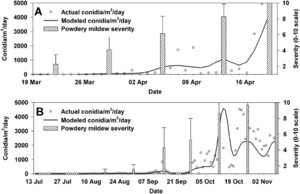 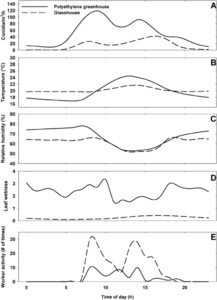