White mold is an important disease of common bean worldwide reducing both yield and quality of seed harvested. Plant protection from white mold can be conferred through both plant architecture and physiological resistance (Kolkman and Kelly, 2003; Schwartz et al., 1978). Physiological resistance can be selected using several approaches for the selection of breeding lines (Hunter et al., 1981; Schwartz et al., 1987; Steadman et al., 1997). A technique known as the “straw test,” which shows a very high correlation with field resistance, was used in the selection of these materials (Petzoldt and Dickson, 1996; Singh and Teran, 2008; Teran and Singh, 2009). This test was used to develop the six breeding lines by inoculating two petioles on each plant in the populations as described previously (Griffiths et al., 2004; Teran et al., 2006).

Lines ‘Cornell 607’, ‘Cornell 608’, ‘Cornell 609’, ‘Cornell 610’, ‘Cornell 611’, and ‘Cornell 612’ were selected from three lineages of recurrent selection using previously developed breeding lines as sources of resistance to white mold (Griffiths, 2009). ‘Cornell 607’ (DRK) and ‘Cornell 608’ (DRK) selections were developed from a cross between ‘Cornell 603’ (Griffiths, 2009) and the DRK cultivar Cabernet (Seminis Vegetable Seeds, Woodland, CA). F1 hybrid seeds generated from the six crosses were increased to generate segregating F2 populations; 40 F2 plants from each lineage were advanced to create 40 F3 sister lines from each of the six populations from single F2 plants. These were sown for inoculation and evaluation of five plants for each of the F3 lines.

Greenhouse inoculations for the development of the white mold-resistant breeding lines were performed at Geneva, NY, with 2- to 3-d-old actively growing mycelia of white mold isolate #48 collected from a snap bean field in Murray, Orleans County, NY (Helene Dillard, NYSAES, Cornell Univ., Geneva, NY) grown on 2% potato dextrose agar (Difco, Sparks, MD). Plants were grown in 15 cm × 15-cm square pots in Cornell mix (Boodley and Sheldrake, 1982) in greenhouses at 25/22 °C day/night with a 14-h photoperiod under 1000-W metal halide lamps (300 μmol·m−2·s−1) in preparation for the inoculation. Plants were inoculated using a modified technique that involved double inoculation of each plant with two 3-cm straws placed on petioles cut 5 cm from the nodes. Plants were evaluated for disease severity 14 d after inoculation, and selections of resistant plants were made based on aggressiveness and severity of the white mold growth. Ratings were made based on a 1 to 5 scale, where 1 = no progression of symptoms beyond the first node, 2 = some progression of symptoms beyond the first node, 3 = progression of symptoms to the second node, 4 = progression of symptoms beyond the second node, and 5 = complete susceptibility and death of the plant.

Selection was undertaken for four generations (F3 to F7) using single seed selection to advance the most promising lines. The advanced lines were tested in replicated greenhouse screens at the F8 generation, and the two lines showing the highest level of resistance to white mold within the DRK lineages based on their reactions to infection using the straw test approach were ‘Cornell 607’ and ‘Cornell 608’. The remaining breeding lines were developed using the same approach. BB lines ‘Cornell 609’ and ‘Cornell 610’ were developed as F8 replicated trial selections from lineages selected through recurrent selection and single-seed descent from a cross between ‘Cornell 604’ (Griffiths, 2009) and BB cultivar T-39 (University of California Davis, Davis, CA). LRK lines ‘Cornell 611’ and ‘Cornell 612’ were also selected using this approach following the generation of breeding lineages from a cross between ‘Cornell 605’ (Griffiths, 2009) and ‘Wallace’ (Cornell University, Ithaca, NY).

The six dry bean (Phaseolus vulgaris L.) breeding lines being released represent three market classes, LRK and DRK in the Andean type, and BB in the Mesoamerican type (Fig. 1). The breeding lines have been evaluated for white mold resistance in replicated greenhouse trials with multistate entries for the 2010 W-2150 multistate regional project (Table 1). All six breeding lines performed well using the modified rating scale of 1 to 9 (Teran et al., 2006) scoring between 2.44 and 4.40 based on a mean of 20 inoculated plants for each entry and with scores in the same range or better than the resistant checks ‘G-122’ and ‘A-195’. 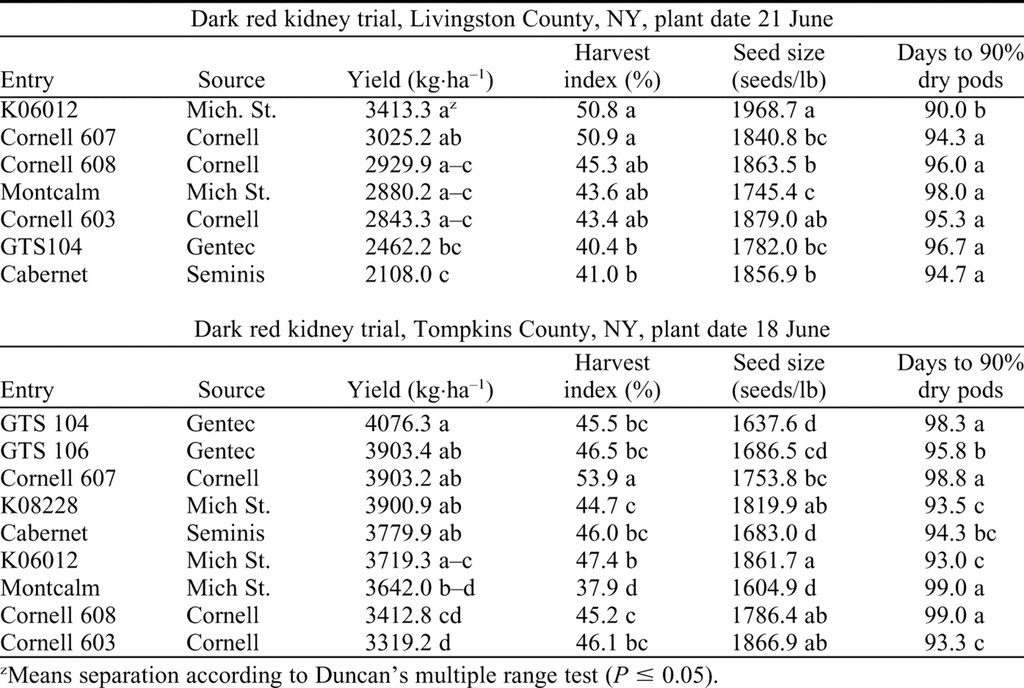 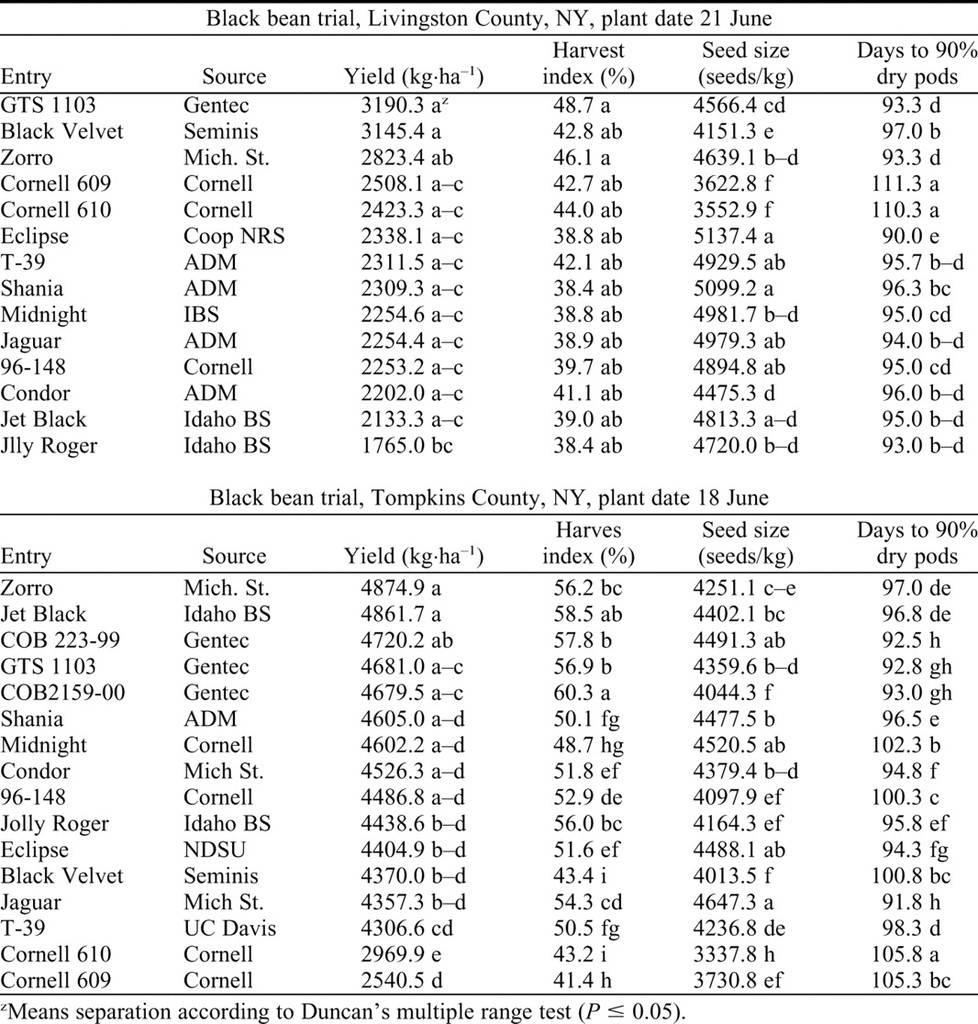 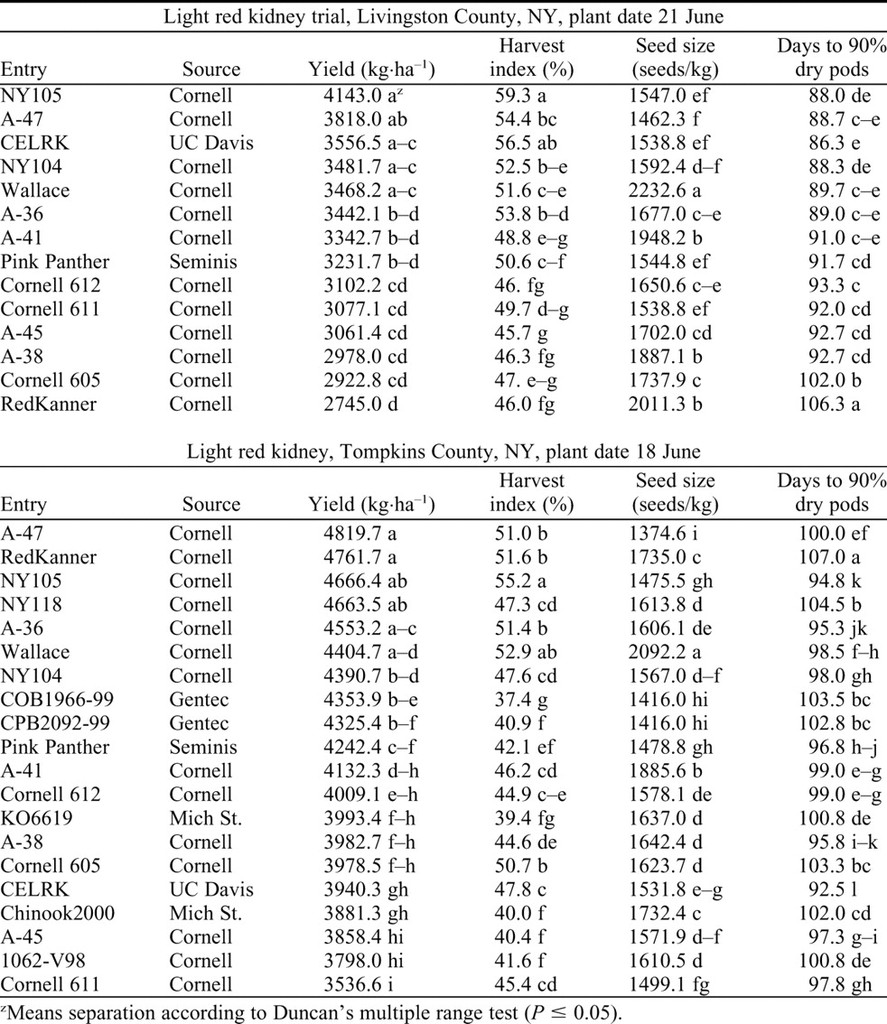 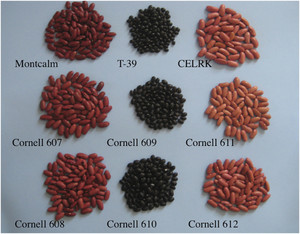