Effect of Smoke-water on Seed Germination and Seedling Growth of Papaya (Carica papaya cv. Tainung No. 2)

Farmers throughout the world have traditionally used fire and smoke in grain drying practices. It is thought that these methods improve germination and seedling vigor (Paasonen et al., 2003). Recently, the germination response to smoke has been studied through the use of smoke-water, which is derived from burning plant material and bubbling the smoke through water. This has been shown to promote germination in wild plant species from many ecosystems (Light and Van Staden, 2004) and also to improve the growth and yield of agricultural and horticultural species (Brown et al., 2003), although it is necessary to dilute the concentration of the smoke-water before application to many species (Lloyd et al., 2000).

The main active germination compound of smoke-water derived from burned plant materials (Van Staden et al., 2004) and cellulose (Flematti et al., 2004) has been identified as butenolide [3-methyl-2H-furo(2,3-c)pyran-2-one], which is effective at very low concentrations (1 ppb). The compound has recently been referred to as "karrikinolide" (Commander et al., 2008). The action of smoke in promoting seed germination in many species is attributed to the presence of this compound (Soos et al., 2009). Dixon and Roche (1995) reported that the promotive effect of smoke is independent of seed size, seed shape, seed type, phylogenetic position, geography, and plant life form, i.e., whether annual, perennial, herbaceous, fire-sensitive seeder, or fire-tolerant resprouter. Smoke from a wide variety of biotic sources, including wood, straw, mixtures of dry and fresh plant material, and charred wood, can stimulate germination (Brown and Van Staden, 1997).

In Taiwan, the rice production area is more than 200,000 ha, creating a problematic volume of dry straw residue (Council of Agriculture Statistics Year Book, 2010) that would better serve agriculture if it could be repurposed. Papaya in Taiwan is grown on 3,287 ha and fruits yield 129,322 tons. The papaya industry is limited by seed germination rates. Therefore, the objective of this study was to evaluate the efficacy of smoke-water prepared from dry rice straw on papaya seed germination and the growth of the ‘Tainung No. 2’ papaya seedling.

Commercial seeds of ‘Tainung No. 2’ papaya (Carica papaya L.) were purchased from Known-You seed company in Taiwan and stored at 9 °C.

A smoke-water solution was prepared by igniting 5 kg of dry rice straw (Oryza sativa cv. Japonica) material (gathered from a rice field in southern Taiwan) in a 20-L stainless steel barrel. Using compressed air, the smoke was continuously bubbled through a 500-mL graduated cylinder containing distilled water for 45 min. This smoke extract was filtered through Whatman No. 1 filter paper and used as the stock solution.

Seeds were soaked in 10 different concentrations of smoke-water [0%, 0.1%, 0.2%, 1%, 2%, 3%, 4%, 5%, 7%, or 10% (v/v), respectively] for 24 h and then rinsed for 1 min in three changes of sterile water. Seeds were planted in Tref peatmoss (Australia; pH: 5.5, electrical conductivity: 2.5 mS·cm−1, organic matter content: 0.85%, total nitrogen: 160 μg·g−1, phosphorus: 78.66 μg·g−1, potassium: 166 μg·g−1, and magnesium: 80 μg·g−1) in pots (dimensions: 10 cm × 8.5 cm × 7 cm, 200 g of peatmoss per pot). Each pot was watered three times weekly. All treatments consisted of five replicates with 30 seeds in each and the entire experiment was repeated twice. Pots were placed in a growth chamber set to 8 h of light phase at 30 °C and 16 h of dark phase at 25 °C with 75% relative humidity. Irradiance was provided at 40 μmol·m−2·s−1 using daylight fluorescent lamps. Germination counts were made daily for 2 weeks. Germination was considered complete when the hypocotyls emerged. Average germination time (AGT) was calculated by: AGT = ∑(ti.ni)/∑n, where ti = time of seed germination in days, ni = number of seeds germinated in time ti (not the accumulated number but the number correspondent to the seeds germinated on that particular day), and ∑n = maximum germination of a seed lot.

Six concentrations of smoke-water [0%, 0.1%, 0.2%, 1%, 3%, or 10%, (v/v), respectively] were used to soak seeds for 24 h, after which they were rinsed with distilled water. Each treatment consisted of three replicates of 30 seeds each were placed in 90-mm petri dishes on three layers of folded paper towel and incubated at room temperature for 24 h. Seeds were embedded in a tissue-freezing medium and cut into 30-μm sections by a Cryostat microtome (Cryocut 1800, Germany). Staining was carried out in 0.1% (w/v) safranin and observed under a microscope.

Seeds were soaked with distilled water for 24 h, sown in peatmoss, and grown in a greenhouse. Papaya seedlings at the two true leaf stage were transplanted (four plants/pot) into peatmoss-filled pots. Four pots were prepared for saturation with one of eight different concentrations of smoke-water [0%, 1%, 2%, 3%, 4%, 5%, 7% or 10% (v/v), respectively]. There were three replicates for each concentration. The pots were placed in a growth chamber and maintained for a growing period of 4 weeks. Each pot was irrigated three times weekly with water. At the end of the experiment, growth parameters were measured and mineral content was analyzed. The seedling vigor index (SVI) was calculated as SVI = [shoot length (mm) + root length (mm)] × percentage germination (Dhindwal et al., 1991).

Plant samples were collected and separated shoots and roots. The samples were washed under tap water, rinsed with 1% HCl, then thoroughly rinsed three times in distilled water. All samples were dried to constant weight at 70 °C in an oven before milling to a fine powder with an electric blender and subsequent storage until analysis. For the determination of mineral content, the dried sample powder (0.5 g) was placed in a muffle furnace at 200 °C for 2 h, 400 °C for 1 h, and then 550 °C for 2 h. The resulting ash was dissolved with 5 mL 2 N HCl and filtered (Whatman No.42) according to the AOAC official method (AOAC, Official Method 973.03, 1995). Determination of total nitrogen followed the micro-Kjeldahl method, determination of phosphorus followed the Molibidam Yellow method, and determination of potassium, magnesium, calcium, iron, manganese, zinc and copper was by atomic absorption spectrophotometer (Hitachi Model Z-2300).

Statistical analysis of experimental data were performed using SAS 9.2 (SAS Institute, 2002) and subjected to one-way analysis for variance by a completely randomized design statistical model. Mean values among treatments were compared by Duncan’s multiple range tests at the 1% (P ≤ 0.01) level of significance.

Effect of smoke-water on seed germination. 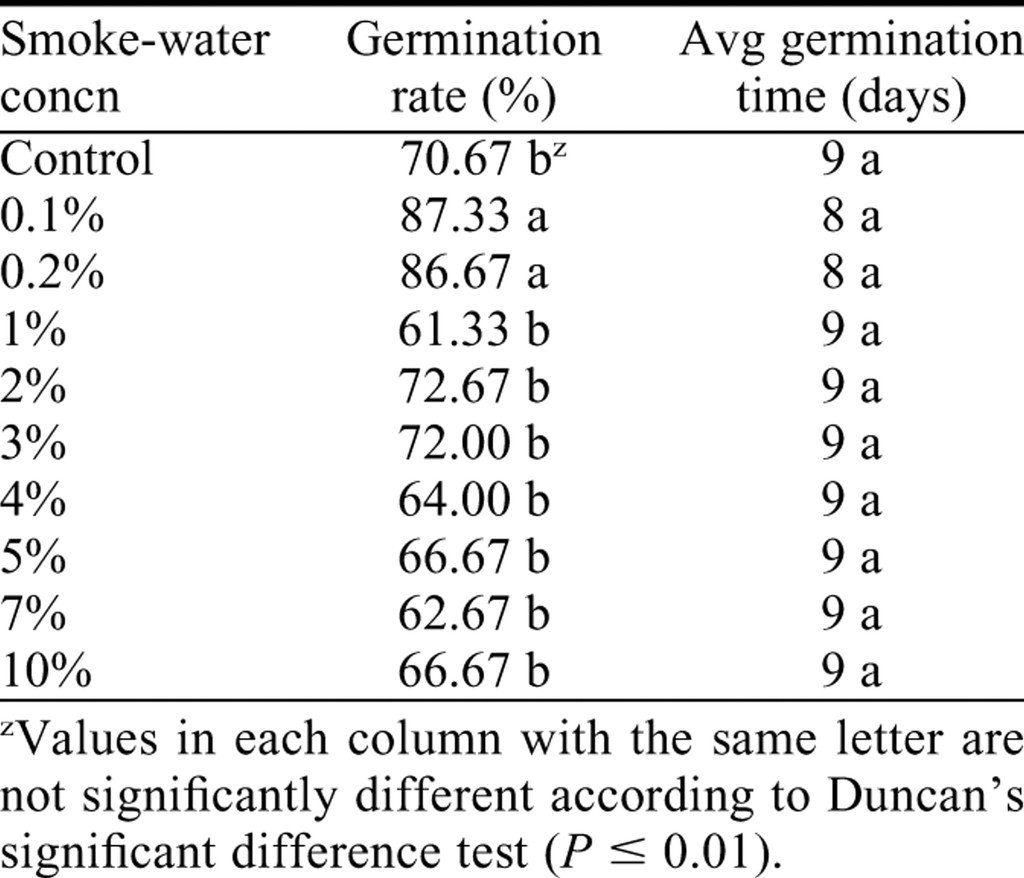 The microstructure of a mature papaya seed contains a fully developed embryo with differentiated meristems, radicle, and cotyledons. In mature seeds, the seed capsule has three layers, consisting of mucilage, seedcoat, and a mesophyll layer of seedcoat. Inside the seedcoat is the single cell layer of micropylar endosperm, which covers the cap-like endosperm and the radicle tip. In this study, results of longitudinal sectioning of papaya seeds treated with smoke-water showed that low concentrations of smoke-water (0.1% and 0.2%) stimulated the endosperm to stretch and the seedcoat to rupture, allowing the radicle to elongate and emerge, thus completing seed germination (Fig. 1).

Effect of smoke-water on growth parameters and nutritional composition of seedling.

Smoke-water enhanced the growth of papaya seedlings. Seedlings grown while saturated with 10% smoke-water showed significantly better growth parameters (with maximum elongation of shoots and roots of 16.7 and 21.9 mm, respectively) than the control seedlings (11.1 and 11.8 mm, respectively). The seedlings also showed a significant increase in shoot fresh weight, shoot dry weight, root fresh weight, and root dry weight in comparison with the control. On the other hand, 10% smoke-water plants had significantly greater number of leaves, elevated chlorophyll content, and greater seedling vigor index (9.0, 34.5, and 38650, respectively) than the control seedlings (7.8, 29.7, and 22970, respectively; Table 2).

Effect of smoke-water on growth parameters of papaya seedlings after 4 weeks. 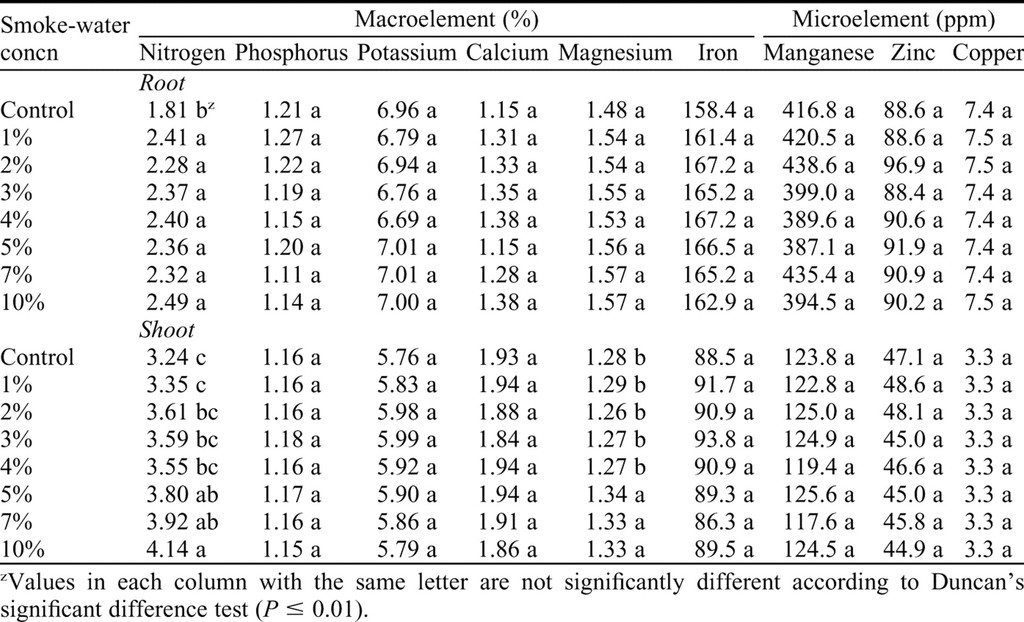 Light et al. (2009) reported that smoke from burning plant material stimulated seed germination of numerous species worldwide. Thus, smoke-water may be acting on the seedcoat in a way similar to scarification, by which the dormant embryo may more efficiently imbibe water and uptake oxygen (Egerton-Warburton, 1998). An important component of biomass smoke is ethylene, a chemical cue known to stimulate the germination of seed. The action of ethylene includes promoting radial cell expansion, increasing seed respiration, and promoting endosperm to rupture (Kucera et al., 2005).

Low concentrations of smoke-water (0.1% and 0.2%, v/v) applied to papaya seeds stimulated the endosperm stretch, caused the seedcoat to rupture, and allowed the radicle to elongate and emerge. Plant-derived smoke compounds have been reported to induce two major changes in seedcoat morphology. First, smoke treatment produced an intense chemical scarification at the seed surface with the external cuticle plasticized to form numerous small spheres on the seed surface. Second, smoke significantly altered the permeability of the internal cuticle directly associated with the breaking of seed dormancy (Egerton-Warburton, 1998).

The application of low concentrations of smoke-water to stimulate germination seems to be positive as a result of the amounts of ethylene, GA, and butenolide in the smoke-water. However, high concentrations of smoke-water may have these same components of levels inhibitory to germination. These findings further suggest that higher concentrations of smoke-water, although inhibitory to germination, may positively improve growth of papaya seedling, although prescreening showed that low-concentration smoke-water was ineffective. Papaya seedlings treated with smoke-water improved all growth parameters, including shoot length, root length, shoot fresh weight, shoot dry weight, root fresh weight, root dry weight, the number of leaves, chlorophyll content, and the seedling vigor index. Ten percent (v/v) smoke-water resulted in significantly greater growth parameter results than the control (Table 2). However, the 5% treatment had the highest root fresh weight. In addition, smoke-water treatments consistently and significantly increased the levels of percent N in roots and shoots and also significantly increased levels of percent magnesium in shoots (Table 3). Roche et al. (1997) suggested that high doses of smoke-water may also confer protection against predation and microbial attack to seeds and perhaps also to seedlings.

Low concentrations of smoke-water (0.1% and 0.2%, v/v) clearly showed significantly potent germination activity in ‘Tainung No. 2’ papaya seeds and reduced the time to germination. Additionally, all smoke-water concentrations (1% to 10%, v/v) promoted multiple growth attributes of seedlings. Smoke-water enhanced the growth of papaya seedlings by promoting the uptake of some mineral nutrients. The use of smoke technology can be helpful in minimizing the use of chemical fertilizers as well as improving the seed germination rate, shortening germination time, and promoting growth of seedlings and crops. 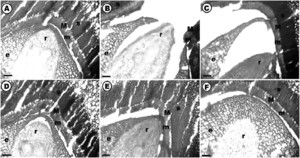