Postemergence Control of Annual Bluegrass with Mesotrione in Kentucky Bluegrass

Search for other papers by Bruce E. Branham in
ASHS
Google Scholar
PubMedClose

Mesotrione is a new herbicide for use on turf that has postemergence activity on many broadleaf and grass weed species. Mesotrione was introduced for agricultural use as Callisto®4S (Syngenta Crop Protection, Greensboro, NC) and was registered for turf use in 2008 as Tenacity®4S (Syngenta Professional Products, Greensboro, NC). Developed after the naturally occurring allelochemical, leptospermone, mesotrione works by inhibiting the enzyme 4-hydroxyphenylpyruvate dioxygenase of the biosynthesis pathway of plastoquinone and tocopherols (Beaudegnies et al., 2009). Tocopherols are antioxidants that scavenge for damaging radicals, and plastoquinone is an electron carrier used in Photosystem II. The production of carotenoids is also ended because of the requirement for plastoquinone as a precursor. Carotenoids are light-harvesting antenna structures responsible for quenching high-energy states of chlorophyll (Beaudegnies et al., 2009). By quenching chlorophyll, carotenoids reduce the production of destructive reactive oxygen species in the plant. When carotenoids are absent, lipids and proteins are damaged by radicals and reactive oxygen species, leading to the disassembly of the photosynthetic complex and eventually destruction of all leaf pigments, which gives plants the characteristic bleached look from mesotrione (Beaudegnies et al., 2009).

Mesotrione is a selective herbicide resulting from plant-specific rates of metabolism (Mitchell et al., 2001). In grain sorghum, mesotrione-tolerant cultivars metabolized mesotrione more rapidly than susceptible cultivars (Abit and Al-Khatib, 2009). Differential rates of metabolism allow mesotrione to be used as a selective herbicide to control weed species while preserving turf species, but may also limit weed control. Species not able to metabolize mesotrione rapidly will show symptoms of injury but may still be able to metabolize mesotrione before fatal injury occurs. This is the situation with ABG and the foundation for this research.

Experiments were initiated on 27 May and 25 July 2009 and 3 May, 7 June, 5 July, and 11 Oct. 2010 at the Landscape Horticulture Research Center on the University of Illinois campus. The trials were conducted in a mixed stand of kentucky bluegrass (KBG) and ABG. The Oct. 2010 trial was conducted on the KBG cultivar Odyssey, and all other trials were performed on a KBG cultivar blend of ‘Total Eclipse’, ‘Award’, and ‘Excursion’. Annual bluegrass comprised more than 50% of the turf area and naturally infested the area. The turf stand was maintained at 2.2 cm and was mowed two to three times per week to simulate a golf course fairway. The soil type was a Flanagan silt loam (fine, smectic, mesic, aquic argiudolls) with a pH of 6.8, sand content of 125 g·kg−1, silt content of 588 g·kg−1, and clay content of 287 g·kg−1. The area was irrigated as needed to ensure no water stress occurred and was fertilized at 147 kg nitrogen/ha/year with three applications of commercial fertilizers.

Turf plots measuring 1.2 m × 1.8 m were treated with mesotrione, as Tenacity® 4S (Syngenta Professional Products) at 11 different rate and application intervals (Table 1). Trials in 2009 had fewer treatments than trials in 2010 because of the addition of new treatments after 1 year of research. All treatment rate combinations were selected to apply the maximum annual application rate of mesotrione, 0.56 kg·ha−1, permitted by the current label (Syngenta Professional Products). As recommended by the current label, a non-ionic surfactant (Activator 90; Loveland Industries, Greeley, CO) was added at 0.25% v/v to all treatments. Treatments were applied with a CO2-pressurized sprayer calibrated to deliver 470 L·ha−1 at 0.27 MPa. The spray boom was composed of four flat-fan nozzles (TeeJet 8002 flat fan spray nozzles; Spraying Systems Co., Roswell, GA) spaced 25 cm apart and operated at a height of 60 cm. Treatment schedules (Table 1) were applied at the same time of day when possible.

Control of annual bluegrass 8 weeks after initial application from various rates and application timings of mesotrione.

Visual ABG injury symptoms were rated weekly on a 0% to 100% scale, where 0% was completely green tissue and 100% represented complete necrosis. In the Oct. 2010 trial, data were also collected weekly for KBG visual injury on a 0% to 100% scale because the KBG cover was much higher than the other trials. Percent control was calculated from initial and final visual estimates of ABG populations 8 weeks after initial application.

Before statistical analysis, data from non-treated plots were removed to stabilize variance (Corbett et al., 2004). Annual bluegrass control data from July 2009, May 2010, and Oct. 2010 were transformed with a logarithmic transformation to meet the assumptions of analysis of variance, whereas the remaining trials and data on KBG injury did not require any transformation (Kuehl, 2000). All data are presented as non-transformed, i.e., percent control. Data were analyzed using Proc Mixed (SAS, 2008), and means were separated using the least significant difference test at α = 0.05. Regression analysis was conducted using Proc Reg (SAS, 2008) on ABG control, application frequency, and temperature.

Kentucky bluegrass injury data were not collected during the first five trials because the population of KBG was too low to accurately observe injury; however, injury data were collected in the Oct. 2010 trial. During this trial, KBG injury was not observed from any treatment for 2 weeks after the initial herbicide application (Table 2). At 3 weeks after initial application, injury symptoms including discoloration and slight bleaching were observed in some treatments, and at 4 weeks after application, all treatments showed some degree of bleaching injury (Table 2). After 4 weeks, however, the degree of bleaching decreased for the majority of treatments. At the end of 6 weeks, treatments of 56 g·ha−1 applied three times per week and 84 g·ha−1 applied twice per week were the only treatments still displaying statistically significant injury (Table 2). Injury from these two treatments would be considered unacceptable, and the turf did not recover completely until the next spring.

Differences in ABG control levels can be attributed to many factors, but the weather during each trial seems the most likely reason. Increasing temperatures have been shown to increase weed control from mesotrione (Johnson and Young, 2002). However, McCurdy et al. (2008) working with perennial ryegrass did not observe a response to temperature. Also, irradiance levels and relative humidity may influence mesotrione activity (Johnson and Young, 2002; McCurdy et al., 2008).

During these trials, air temperatures and application timing interact to dramatically affect ABG control (Tables 1 and 3). In May and Oct. 2010, the temperatures were much lower during the first 3 weeks than the other trials (Table 3). In the May trial, temperatures rose beginning in the fourth week, whereas the temperatures in the October trial dropped further beginning in the fourth week leading to different responses to mesotrione in these two trials. In May 2010, only two treatments provided significant ABG control. These two treatments were the only treatments that had applications that extended into the fourth and fifth weeks of the experiment when average temperatures were much higher. In Oct. 2010, however, the temperature dropped after the first 3 weeks but high levels of control were still observed in this trial, and one treatment, 186 g·ha−1 applied three times on a 14-d interval, gave 100% ABG control but in other trials, it performed poorly. These results indicate that ABG response to mesotrione differs dramatically with temperature and season and reinforces the results of Reicher et al. (2011) who obtained acceptable ABG control with late-season mesotrione applications. The decline in temperatures in the October trial may reduce the metabolism of mesotrione by ABG, allowing damaging concentrations of mesotrione to remain in the plant long enough to create high levels of control as shown by Mitchell et al. (2001).

In July 2010, the average temperature was the highest of all the trials (Table 3), and a number of treatments provided good to excellent control (Table 1). During the first 3 weeks after trial initiation, temperatures averaged 25.7 °C, and five treatments provided greater than 80% control and seven greater than 70% control under these conditions. Higher temperatures may increase control levels as a result of the increase in photosynthesis and other metabolic reactions, leading to an increased concentration of radical and reactive oxygen species in the plant. Because mesotrione can reduce free radical scavenging and quenching, the higher concentration of radicals will lead to more damage to susceptible plants. Mesotrione treatments that featured multiple, frequent applications yielded excellent control when temperatures were above 20 °C during the first 3 weeks after trial initiation (Table 1); conversely, treatments with few applications or a long period of time between applications were not as successful in controlling ABG under warmer conditions. Metabolism of mesotrione is the most likely explanation because the rapid metabolism of mesotrione during high temperatures will reduce the concentration in the plant quickly, thus reducing herbicidal activity. Mitchell et al. (2001) showed that species are controlled better when mesotrione is metabolized slowly and a high concentration is maintained in the plant.

Application rate and frequency are the main factors that determine how much mesotrione enters the ABG plant. During the hot July 2010 trial, ABG recovered rapidly from mesotrione at 186 g·ha−1 applied three times on 2-d intervals, whereas injury from 56 g·ha−1 applied three times per week for 10 applications steadily increased for the first 2 weeks of the trial and then remained injured for the rest of the trial (Fig. 1B). Frequent and prolonged applications overcome the rapid metabolism of mesotrione, keeping mesotrione concentrations elevated enough to cause injury leading to ABG control during periods of high temperatures. Applying mesotrione as frequently as three times per week is an attempt to overcome the rapid metabolism of mesotrione by ABG. However, best overall control appears to result from a combination of application rate, timespan of applications, and temperature. The three treatment regimes that gave the most consistent and highest level of control took between 21 and 31 d to complete the applications (Table 1). Weekly applications of mesotrione at 186 or 110 g·ha−1 were, in general, not as effective as comparable rates of mesotrione applied more frequently. The exception was the Oct. 2010 trial when 186 g·ha−1 applied on a 14-d interval for three applications gave outstanding control (Table 1).

Damage to KBG and other desirable turf species is undesirable, but the injury was minor on the cultivars used in our studies and recovery occurs quickly after applications stop. Because mesotrione symptoms occur in new growth, damaged tissue is quickly removed through mowing after applications stop. Further research into the addition of a safening agent may help to reduce the negative aesthetic results from mesotrione but maintain weed control. Further research is also needed on cultivar sensitivity to mesotrione, particularly because KBG is a variable species with a wide selection of cultivars. Some research on cultivar tolerance to mesotrione in KBG has been reported (Bhowmik et al., 2007), however, not under the application regimes used in this research. The most effective application regimes for ABG control should be expected to increase the risk of injury to susceptible KBG cultivars.

Mesotrione can provide effective ABG control if multiple applications are made when air temperatures are consistently above 20 °C. Seven to 10 applications at low rates of mesotrione can be used any time throughout the year to achieve high levels of control, but this is a very labor-intensive approach. Using five applications twice per week at 110 g·ha−1 or three applications at 186 g·ha−1 per week when the temperature is above 20 °C may control ABG and is more practical for many turf managers. Good ABG control can be achieved in the fall as air temperatures are declining, but applications should be at higher rates with longer intervals between applications. A successful regimen using mesotrione to control ABG in KBG will have to be based on desired control levels, tolerance of injury to the desired turf, amount of labor required, and time of year the herbicide will be applied.

Effect of application frequency on annual bluegrass control from mesotrione at 186 g·ha−1 from the June and July 2010 field trials. Annual bluegrass exhibits a quadratic response with a maximum control level at 7.8 d.

Effect of application frequency on annual bluegrass control from mesotrione at 186 g·ha−1 from the Oct. 2010 field trial. Annual bluegrass showed a linear response with control levels increasing as the number of days between applications increases. 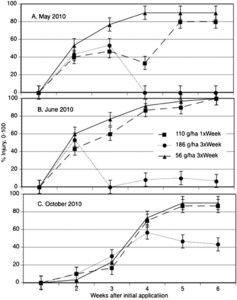 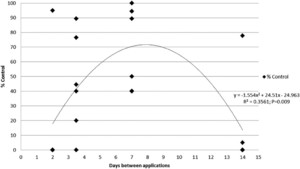 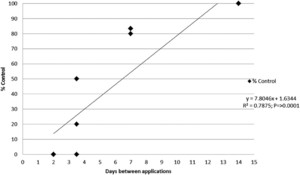