Alternate bearing was recently identified as a key component limiting expansion of the pecan industry by producers, shellers, and processors (Smith and Weckler, 2011). Pecan alternate-bearing theories have undergone modification as additional data have become available. Current theory concerning flowering regulation of angiosperm fruit trees (Bangerth, 2009) and specifically pecan (Wood, 2011) states that the level-one signal of the autonomous floral pathway is florigen [a mobile flowering locus T protein (Yang et al., 2007)]. The level-two floral signal appears to involve long-distance signals that engage histones affecting chromatin configuration and thus accessibility to particular genes for transcription (Kouzarides, 2007; Nelissen et al., 2007). Phytohormones are candidates for long-distance signals such that gibberellins and auxin inhibit floral induction, whereas cytokinins promote floral induction (Bangerth, 2009; Wood, 2011). In pecan, non-structural carbohydrate concentrations in roots were implicated in pistillate flower differentiation (post-floral induction) (Malstrom, 1974; Smith and Waugh, 1938; Sparks and Brack, 1972; Wood, 1989, 1991; Worley, 1979), but later work demonstrated that abundant stored non-structural carbohydrates were not related to return bloom (Rohla et al., 2007a, 2007b; Smith et al., 2007). Work on Arabidopsis indicated that a fundamental mechanism of the photoperiodic and autonomous pathways was delivery of sugar to the shoot apex (van Nocker, 2001). Thus, non-structural carbohydrates would only function in floral regulation (causing reversion of the induced meristem) when their concentrations were below a threshold capable of supplying requisite sugar to the induced (reproductive) meristem. Vernalization has been suggested as a requirement for floret formation in pecan (Amling and Amling, 1983). In Arabidopsis, vernalization and autonomous pathways converge on the negative regulation of flowering locus C (Ausín et al., 2004). In pecan, vernalization may enhance sugar transport to induced meristems, avoiding meristem reversion to the vegetative state and favoring pistillate flower differentiation. Cultivars receiving inadequate vernalization may flower through the autonomous pathway; however, reversion of induced meristems should be greater resulting in less production.

Several cultural practices have been developed to reduce pecan alternate bearing. These include management of the tree canopy for light interception (Hinrichs, 1961; Lombardini, 2006), mineral nutrition (Smith, 2010; Smith et al., 1985), groundcover vegetation (Smith, 2011), water (drainage, conservation, and irrigation) (Kallestad et al., 2006; Smith and Bourne, 1989), pest control (Mulder et al., 2011), and cropload (Reid et al., 1993; Smith and Gallott, 1990; Smith et al., 1993). Cultivar selection also has a major impact on alternate bearing (Conner and Worley, 2000). ‘Pawnee’ is a popular cultivar grown throughout the entire pecan-growing region because of its early-season maturity and large fruit size (Thompson and Grauke, 2000). However, it has developed a reputation among producers for alternate bearing. Alternate-bearing pecan cultivars typically produced a lower percentage of shoots with fruit if that shoot bore fruit the previous year compared with shoots that were vegetative (Rohla et al., 2007b). The opposite was true for cultivars that tend to bear uniform crops among years. Data indicate that the fruit-bearing characteristics of ‘Pawnee’ represent a cultivar that should have relatively uniform production (Rohla et al., 2007a). However, even cultivars with low alternate-bearing tendencies will produce an excessive crop resulting in few flowers and fruit the next year unless fruit were adequately thinned. An objective of this study was to determine the maximum cropload ‘Pawnee’ trees in this study could carry and return a similar crop the next year. In addition, selected nut quality characteristics were correlated with cropload.

‘Pawnee’ on open-pollinated seedling ‘Elliott’ rootstocks were 14 years old when the study was initiated. Tree were spaced 12.2 m × 12.2 m, irrigated by microsprinkler, and were planted on a Teller sandy loam soil (fine-loamy, mixed, thermic, Udic Argiustoll). The soil pH was 7.9 in the upper 15 cm and 7.2 in the 15- to 30-cm level. Rows were oriented north–south and were hedge-pruned annually on the east and west sides 2.5 to 3 m from the trunk and the top 8.5 to 9.5 m tall. The orchard floor was maintained vegetation-free throughout the growing season with multiple applications of glyphosate [N-(phosphonomethyl) glycine] in the form of its potassium salt applied at 408 g·ha−1 a.i. No winter cover crops were used, but cool-season vegetation was allowed to grow during the winter. Trees received ≈160 kg·ha−1 nitrogen (N) annually from nitrate-contaminated irrigation water and had not received supplemental N application since 2002. Foliar applications of zinc sulfate (36% zinc; 6.7 kg·ha−1 material) were applied annually beginning when the first leaf began to unfurl then at ≈2-week intervals until applied five times during each growing season.

Forty-nine trees were monitored annually for 5 years. Trees were harvested, yield measured, and a random 40-nut sample was collected from each tree. Nut samples were collected from field-run nuts (before cleaning to remove light weight nuts) and analyzed for weight/nut, weight/kernel, and kernel percentage. Trunk diameter was measured annually at 1.4-m height while trees were dormant. An alternate-bearing index was calculated for each tree using the equation:

Superior trees among the 49 observed trees were determined by those with above average cumulative yield and below average alternate-bearing index. Trees that occurred in both categories they were identified as superior (Wood, 1989).

Regressions of previous year with current-year yield efficiency were significant in three of four cases (Fig. 2). Trends were linear in one instance and curvilinear in the other two cases. Coefficients of determination indicated that the significant regressions accounted for 16% to 28% of the data variation.

Regressions of yield/tree with weight/nut, weight/kernel, and percent kernel were significant in all cases (2002–2006; Figs. 3–7). Coefficients of determination were as large as or larger for weight/kernel than weight/nut in all but one instance. Relationships with yield for weight/nut or kernel were linear during 2002, 2004, and 2006 and curvilinear in 2003 and 2005.

Yield the previous year accounted for 24% to 37% of the variation in the current-season yield (Fig. 1). This is not surprising because Sparks (1996) found that previous year nut production only accounted for 6% of a model predicting current-season Georgia pecan production. If Georgia's acreage increase was eliminated from the model, previous year nut production accounts for 12% of the model predicting Georgia's current-year production. The coefficients of determination in this study were higher because they represent recurring yields on the same trees, whereas those in the Georgia model use annual production from the entire state.

One of the objectives of this study was to determine the optimum cropload (defined as the same production each year) for ‘Pawnee’ trees in this study. The yield that returned the same yield the next year was 18 kg/tree, 29 kg/tree, and 24 kg/tree in 2002, 2004, and 2005, respectively. The estimate for the optimum crop varied ≈60% among years. Factors affecting the optimum cropload include tree size, environmental conditions, and pests. Trees were smaller in 2002 compared with 2004 and 2005; thus, a smaller optimum yield would be expected on smaller trees. Pests, both arthropods and disease, were not a significant problem in this well-managed orchard. Optimum yield in 2004 and 2005 were relatively close only differing by 21%. Differences in the apparent optimum cropload during this period reflect different environmental conditions during the growing season because canopies were maintained approximately the same size by hedge-pruning. Sparks (1996) found several environmental variables to be as important as or more important than previous-year yield in predicting the current crop.

Coefficients of determination for previous year yield efficiency with current-year yield efficiency ranged from 0.16 to 0.28, accounting for less variability than regressing for previous year yield/tree with current yield/tree (0.24–0.37) (Figs. 2 and 3). Trunk cross-sectional area of pecan trees with minimal pruning was closely related to canopy volume and surface area (Smith, 2008). Therefore, a closer correlation between the previous year and current year would be expected using yield efficiency rather than yield/tree. However, trees in this study were hedge-pruned, reducing the correlation between trunk size and the canopy. Trunks continued to grow annually, but the canopies were maintained approximately the same size by pruning; thus, adjusting yield by trunk size becomes unacceptable in hedge-pruned orchards.

Average cumulative yield and alternate-bearing index were determined, and then trees were selected in the top half of cumulative yield and lower half of alternate bearing. There were 13 of 49 (27%) trees in both categories that were designated as superior. Wood (1989) reported 43% of ‘Stuart’ and 14% of ‘Schley’ pecan trees on an unknown seedling rootstock were designated as superior using the same criteria. He attributed the superiority of these trees to rootstock. In this study, the soil was uniform; trees received the same cultural practices and were exposed to the same environmental conditions. Therefore, it is reasonable to credit the superior performance of the clonal ‘Pawnee’ scion to differences among the seedling ‘Elliot’ rootstocks.

Correlations between yield and kernel percentage were usually lower than the correlations with weight/nut or weight/kernel (Figs. 3–7). This indicates that, as yield/tree increases, shell weight and kernel weight were not reduced at the same rate. Pecan fruit attain full size (volume) before deposition of cotyledonary material (Smith, 2009). Demand for available resources was minimal while fruit were growing in size and during shell lignification. However, because kernels develop in the latter part of the growing season, demand for carbohydrates and nutrients increases substantially and competition among developing fruit amplifies. Therefore, greater tree yields disproportionately impact kernel and shell weights, thus reducing the relationship between yield/tree and percent kernel more than with shell or kernel weights.

Uniform cropping among years with good nut quality was possible on ‘Pawnee’, but the optimum cropload was a moving target, probably reflecting changes in tree canopy size among years and environmental conditions during the growing season. The ability of ‘Pawnee’ to achieve uniform cropping between years with abundant production supports work (Rohla et al., 2007a) indicating that ‘Pawnee’ has characteristics of a low alternate-bearing cultivar (Rohla et al., 2007b). The alternate-bearing reputation of ‘Pawnee’ appears to be associated with inadequate fruit thinning when trees are overloaded (Smith and Gallott, 1990) or erratic environmental conditions rather than an inability to produce fruit on shoots that previously bore fruit. Previous research suggested that a cropload of 65% to 70% of the shoots bearing fruit was recommended for a cultivar with similar nut size to achieve acceptable nut quality and return bloom (Smith et al., 1993). Observations indicate that this recommended cropload was reasonable to achieve the desired outcome with the normal environmental variations expected during the growing season.

Correlations between the previous year yield with the subsequent year yield of ‘Pawnee’ pecan. Correlations were calculated for (A) 2002 with 2003 through (D) 2005 with 2006. Coefficients of determination were nonsignificant (ns) or significant at 1% (**) or 0.1% (***). Dotted lines represent 95% confidence bands.

Correlations between previous year's yield efficiency [g/cm2 trunk cross-sectional area (TCSA)] with the subsequent year's yield efficiency of ‘Pawnee’ pecan. Correlations were calculated for (A) 2002 with 2003 through (D) 2005 with 2006. Coefficients of determination were nonsignificant (ns) or significant at 1% (**) or 0.1% (***). Dotted lines represent 95% confidence bands.

Correlations between yield in 2002 with weight/nut, weight/kernel, and kernel percentage of ‘Pawnee’ pecan. Coefficients of determination were significant at 0.1% (***). Dotted lines represent 95% confidence bands.

Correlations between yield in 2003 with weight/nut, weight/kernel, and kernel percentage of ‘Pawnee’ pecan. Coefficients of determination were significant at 0.1% (***). Dotted lines represent 95% confidence bands.

Correlations between yield in 2004 with weight/nut, weight/kernel, and kernel percentage of ‘Pawnee’ pecan. Coefficients of determination were significant at 0.1% (***). Dotted lines represent 95% confidence bands.

Correlations between yield in 2005 with weight/nut, weight/kernel, and kernel percentage of ‘Pawnee’ pecan. Coefficients of determination were significant at 5% (*) or 0.1% (***). Dotted lines represent 95% confidence bands.

Correlations between yield in 2006 with weight/nut, weight/kernel, and kernel percentage of ‘Pawnee’ pecan. Coefficients of determination were significant at 5% (*) or 0.1% (***). Dotted lines represent 95% confidence bands.

The relationship between the alternate bearing index and cumulative yield of ‘Pawnee’ pecan from 2002 to 2006. Coefficient of determination was significant at 0.1% (***). A lower index value indicates less variability among years in the yield. Dotted lines represent 95% confidence bands. 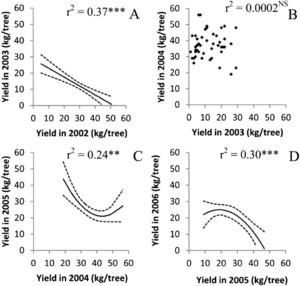 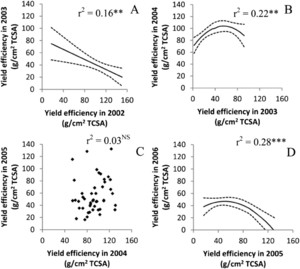 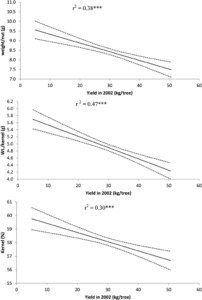 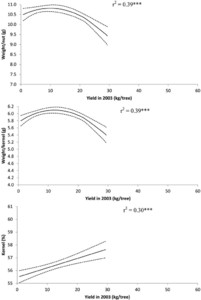 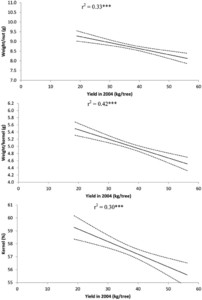 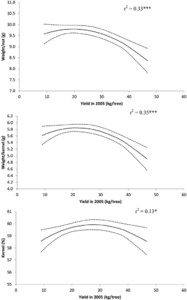 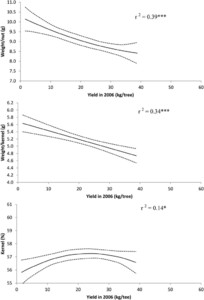 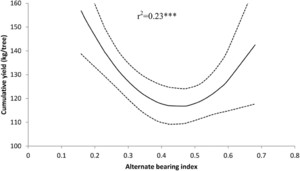