The ‘Marketmore’ series has long been a standard for disease resistance in cucumber. ‘Boothby's Blonde’ is a cucumber heirloom praised by growers for its distinctive appearance, earliness, and eating qualities but is highly susceptible to fungal diseases. We report the development of the monoecious open-pollinated cucumber ‘Salt and Pepper’ that combines the desirable qualities of ‘Marketmore 97’ and Boothby's Blonde’. The fruit of ‘Salt and Pepper’ is white with black spines like that of ‘Boothby's Blonde’ but has foliar powdery mildew resistance. Selection of ‘Salt and Pepper’ was performed on USDA-certified organic ground, making it one of the first commercially available modern vegetable cultivars adapted specifically (but not exclusively) for organic production.

Cucumber, probably originating from India, has been domesticated for over 3000 years (Bates and Robinson 1995). In modern times plant breeders have selected for a diversity of fruit shapes and colors, sex expression, growth habits, and disease resistances (Wehner and Robinson, 1991). A long history of breeding at Cornell University and elsewhere has resulted in the development of cucumber cultivars that are resistant to a number of plant diseases (Cavatorta et al., 2007; Peterson, 1975). Resistance breeding began in the 1920s to address Cucumber mosaic virus (Porter, 1929) and now includes a number of virus, fungal, and bacterial diseases (McGrath and Zitter, 2011). However, many farmer-developed heirloom cultivars continue to be grown that have novel appearances or high-quality fresh market characteristics such as taste but that lack disease resistances. Recognizing that private companies typically do not pursue improvement of such cultivars because they are grown on small acreage, the USDA-funded Public Seed Initiative (<http://www.plbr.cornell.edu/psi>) and subsequently the Organic Seed Partnership (<http://www.organicseedpartnership.com>) were set up at Cornell to address these underserved markets. As part of this work we have developed ‘Salt and Pepper’, a monoecious cucumber inbred that is adapted to Northeast growing conditions and combines disease resistances from Cornell germplasm with the eating qualities of the cold-tolerant heirloom cultivar Boothby's Blonde.

During the summer growing season of 2005, an F2 population of a cross between ‘Marketmore 97’ and ‘Boothby's Blonde’ was planted on an organic research plot at Cornell University's Freeville Organic Research Farm in Freeville, NY. A selection was made that had white-skinned fruit with black spines similar to ‘Boothby's Blonde’ but that appeared to be resistant to powdery mildew. Several generations of selection for mildew resistance, alternating between the greenhouse and field, were made to generate an F6 line, which was named ‘Salt and Pepper’. Seed from this generation was increased by allowing open pollination at an isolated location.

The fruit of ‘Salt and Pepper’ has white skin with black spines (Fig. 1A). It has small fruit with an average weight of 105 g ± 17 g, a length of 10.8 cm ± 0.7 cm, and a width of 4.1 cm ± 0.3 cm (Table 1). The cucumber fruit is visually similar to the heirloom cultivar Boothby's Blonde and is comparable in weight and width but is slightly greater in length (Table 1). In blind taste tests, ‘Salt and Pepper’ routinely scores higher and has been described as being very sweet and having a crisp texture. As part of a national vegetable quality trial, ‘Salt and Pepper’ was compared with ‘Pearl’, an industry standard for white-skinned cucumbers. Twelve of 16 judges preferred the flavor of ‘Salt and Pepper’, three had no preference, and only one preferred the flavor of ‘Pearl’.

‘Salt and Pepper’ is resistant to a foliar pathogen that is a significant problem for cucumber production in the Northeast. Under high disease pressure, no powdery mildew symptoms were observed, whereas ‘Boothby's Blonde’ and the cultivar Poinsett 97 became infected (Table 2; Fig. 1B). ‘Salt and Pepper’ also appears to be less susceptible to endemic strains of downy mildew relative to ‘Boothby's Blonde’ (Table 2; Fig. 1B).

Replicated field trials over several years indicate that the disease resistance incorporated into ‘Salt and Pepper’ appears to be agronomically meaningful. In a field trial conducted in Ithaca, NY, during the 2009 growing season, ‘Salt and Pepper’ remained alive and productive long after ‘Boothby's Blonde’ had been killed by disease. The additional harvest time resulted in much higher yields (Fig. 2).

‘Salt and Pepper’ is available as organic seed from Johnny's Selected Seeds (<http://www.johnnyseeds.com/>).

Yield comparison between ‘Boothby's Blonde’ and ‘Salt and Pepper’. Measurements are averages of the cumulative number of fruit per plant for each of three replicates. Standard deviations are shown. Fruit was harvested and counted twice a week from eight plants per genotype per replicate. ‘Salt and Pepper’ continued to yield marketable fruit after ‘Boothby's Blonde’ plants had succumbed to disease. 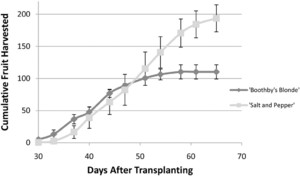