Fruit tissue enzymatic browning is a consequence of oxidative degradation of phenolic compounds by polyphenol oxidase (PPO), which leads to production of quinones that polymerize rapidly to form brown-colored products (Kader and Chordas, 1984). The concentration of phenolic compounds, the activity of PPO, and the presence of available oxygen are strongly related to enzymatic browning (Mayer and Harel, 1979). Phenolic composition and concentration are important contributors to fruit antioxidant capacity, which is highly desirable, because it provides several benefits to human health (Robards et al., 1999). In addition, phenolic compounds, in combination with other factors, can improve brown rot (Monilinia fructicola) resistance in peaches by acting directly on cutinase and preventing the penetration of this fungal infection within the fruit flesh (Bostock et al., 1999).

Flesh browning can be triggered by fruit bruising; by exposure to oxygen in fresh cut, sliced, and pulped forms; or by thawing fruit after prolonged freezing. In addition, lye-peeling of canned fruit also strongly influences the browning potential of the fruit (Vamosvigyazo, 1981). Thus, fruit handling and processing are critical factors underlying browning potential, because these activities can damage cell structure. Enzymatic FB is a major component of postharvest CI problems in stone fruit. It is also a commercial problem, because browning can affect fruit quality in fresh or canned forms. Any enzymatic browning is a major industrial concern because the altered sensory and visual characteristics are unattractive to consumers in addition to the quality loss resulting from decreased concentrations of phenolic compounds. It is highly desirable, therefore, to have fruit with high concentrations of phenolic compounds but low postharvest FB during and after cold storage (Ogundiwin et al., 2008). A high concentration of antioxidants such as ascorbic acid is also highly desirable in fruits, because it may prevent some degree of enzymatic browning by inhibiting PPO activity (Teisson, 1972). Furthermore, quinone compounds can be reduced by ascorbic acids, regenerating phenolics and inhibiting browning.

Some stone fruit species are more susceptible to FB than others. Some peach and nectarine cultivars from California breeding programs are highly susceptible to FB, reducing their storage potential (Crisosto et al., 2008, 2009). This study relates nutrient deficiencies to FB and its precursors phenolic concentration, PPO activity, and antioxidant concentration in a high FB, susceptible cultivar. We hypothesize that low concentrations of nutrients and phosphorus (P) will lead to greater FB by modifying the membrane permeability to make browning reaction substrates more readily available.

In 2000, 60 large tanks, 3.35 m long, 2.44 m wide, and 1.22 m tall (10,000 L), were installed at the Kearney Agricultural Research Center to study the nutrition of stone fruit. Each tank was filled with sand to enable accurate control of the nutrients applied and deficiencies imposed.

A ‘Grand Pearl’ nectarine tree was placed in each tank and trained to a perpendicular V system to ensure a uniform shape. Four different fertilization treatments were imposed for 8 years using a drip irrigation system with two emitters per tank. The treatments were a fully fertilized control, low nitrogen (N), low P, and low potassium (K) with four replications per treatment. The nutrient solutions were based on Hoagland's solution (Johnson and Crisosto, 2003).

In 2008 and 2009, fruit were collected from each tree as they reached commercial maturity based on ground color and firmness. Fruit size, soluble solids concentration (SSC), and titratable acidity (TA) were determined at harvest. In 2009 only, fruit was stored for 11 d at 5 °C for later quality evaluation. After storage, fruit was evaluated for internal breakdown symptoms and other disorders (Crisosto et al., 1994). Internal breakdown (CI) symptoms were classified as FB or bleeding as described (Crisosto et al., 1999). These observations were made on the mesocarp around the pit after the fruit was cut transversely along the plane of the suture.

PPO measurements were determined as described (Cheng and Crisosto, 1995). A sample of 0.5 g finely ground fruit material was extracted with 1 mL ice-cold extraction buffer (0.2 M sodium phosphate buffer, pH 6.2, 1 mm EDTA, 5% w/v PVPP, and 1% Triton X100). The mixture was vortexed and incubated on ice for 1 h and then centrifuged at 17,000 × g for 10 min at 4 °C. The supernatant (enzyme extract) was collected, kept on ice, and used immediately for the PPO enzyme assay. The enzyme assay contained 0.8 mL 20 mm catechol in 0.1 M phosphate buffer, pH 6.2, and 0.2 mL crude enzyme extract. The increase in absorbance at 420 nm was recorded from 1 to 4 min after the addition of enzyme extract, at 0.5-min intervals, using a Smartspec-Plus Spectrophotometer (BIO-RAD Laboratories, CA). The reactions were linear within the time range. PPO activity was expressed as ΔA420 nm·min−1·g−1 fresh weight.

A sample of 0.4 g finely ground fruit powder was extracted with 1 mL 80% methanol. The mixture was incubated at 4 °C overnight and then centrifuged for 10 min at 17,000 × g at 4 °C to collect the supernatant. The supernatant extracts were stored at –80 °C until analysis for total phenolics and antioxidant activity.

Total phenolics were determined by the Folin-Ciocalteau method as described (Singleton and Rossi, 1965) and expressed as gallic acid equivalents (μg GAE/g fresh weight). In addition, absorbance at 280 nm was recorded using a Smartspec-Plus Spectrophotometer (BIO-RAD Laboratories). 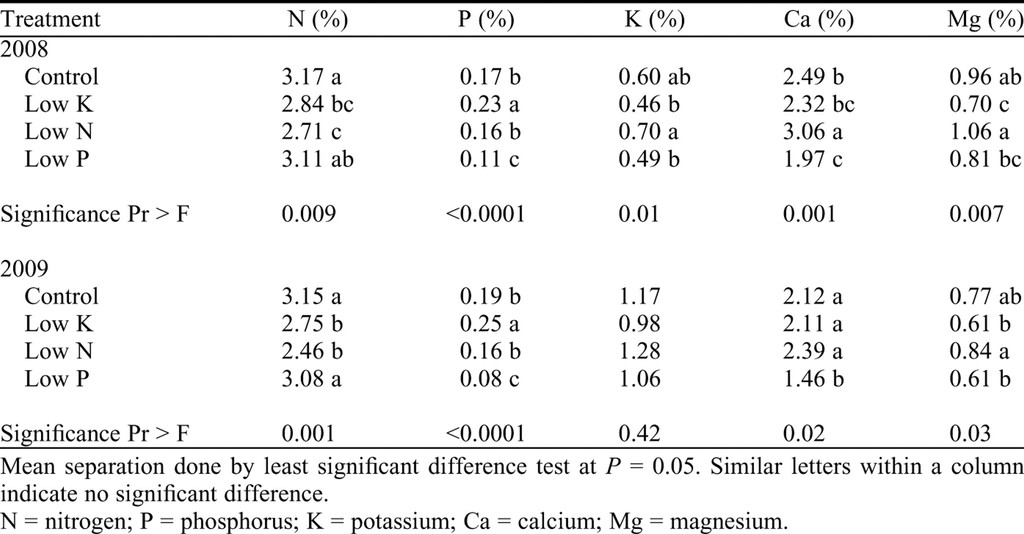 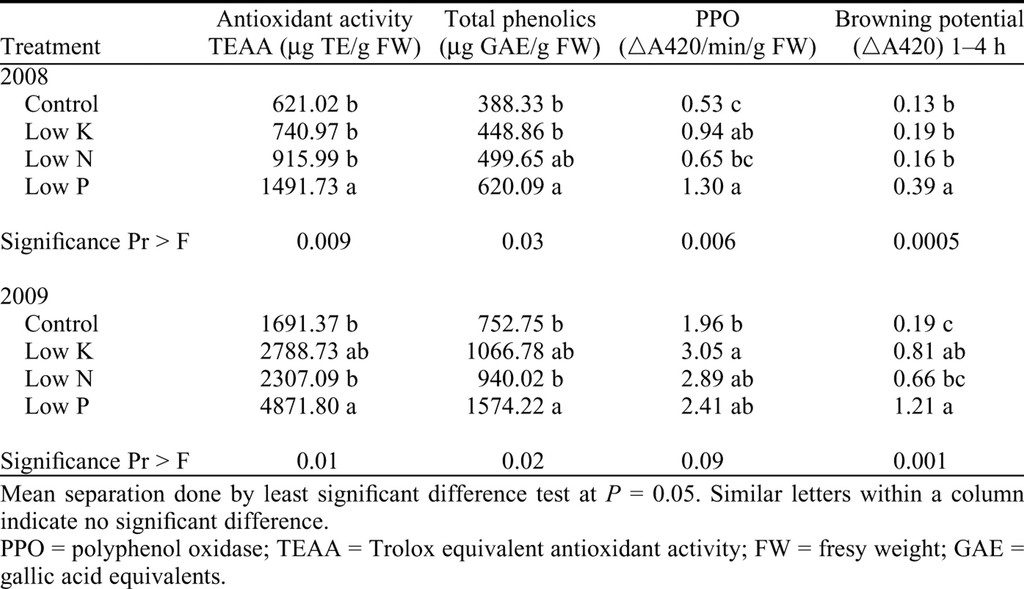 Although most nutrient analyses and recommendations are based on leaf sampling, we focused primarily on fruit tissue concentrations, because these are likelier to provide a sensitive measure that correlates with fruit postharvest disorders such as FB. Reducing specific nutrients provided to the tree using an otherwise complete nutrient mixture applied to the sand tanks did not always reduce the specific targeted nutrient in fruit, indicating complex interactions among nutrient translocation and use within the tree. Subjecting ‘Grand Pearl’ nectarines to low concentrations of N, P, and K affected fruit biochemistry and visual FB after prolonged cold storage. Our work demonstrated that low P and N affect the intensity and incidence of fruit FB during cold storage, independently of which of these two nutrients was deficient (Table 4). The low P treatment reduced both P and N concentrations in the fruit, whereas the low N treatment decreased fruit P without affecting N. The low K treatment did not affect fruit K and Ca concentrations but did reduce N and P. This highlights the complex nutrient interactions through which limited availability of one nutrient produced imbalances that affected the total fruit nutrient status. From the biochemical analysis, we conclude that low N, K, and P treatments had a significant effect on browning potential precursors in 2009. However, only low P concentration in the fruit had a consistent effect on browning potential and its precursors during both seasons. Unfortunately, fruit nutrient concentrations were not measured in 2008.

Fruit with low P concentrations had increased phenolics concentrations, which act as substrates for the enzyme PPO, which produces quinones that turn tissues brown. In addition, P concentration may have a role in cell membrane permeability and loss of integrity with subsequent destruction of fruit cellular compartmentation (Mayer and Harel, 1979), allowing the phenolic substrates to be more accessible to PPO. Because the substrate (phenolic compounds) and the enzyme (PPO) required for the browning reaction are normally confined in separate cellular compartments (the vacuole and cytoplasm, respectively) (Amiot et al., 1996), the browning reaction does not normally take place. However, when the membrane integrity or permeability of each compartment is disrupted, phenolic compounds become accessible to PPOs and the oxidative reaction takes place, leading to tissue browning. Phosphorous limitation, in combination with other factors such as cold temperature storage, may trigger this situation. Plants can replace membrane phospholipids with galactolipids (non-phosphorous lipids) in response to P-limited conditions (Tjellstrom et al., 2008). However, it is not clear how this replacement affects the integrity and permeability of the membrane and consequent internal disorders. Contrary to what we expected, low P treatments had the most antioxidants, which were supposed to counteract oxidation and retard browning. Because many of the phenolic compounds present in fruit can be antioxidants, oxidation substrates, or both (Amiot et al., 1996), we suspect that most of the antioxidants measured in the fruit flesh were good substrates for the oxidation reaction in addition to being antioxidants. Results from stepwise regression analysis (data not shown) demonstrated that antioxidant capacity and PPO were the most important factors in the FB reaction, suggesting that most of the antioxidants measured were phenolic compounds acting as PPO substrates.

Although the fruit and leaf nutrient concentrations among soil fertilization treatments were similar to the recommended and expected concentrations, differences were observed. Midsummer leaf P values below 0.1% are considered deficient in peach and nectarine trees, but currently recommended leaf concentrations are mostly based on production measures (yield and size) (Johnson and Uriu, 1989). Leaf critical values obtained in all treatments were lower than the values recommended for plums in South Africa, where midsummer leaf values of at least 0.22% are required to minimize cold storage disorders (Kotze et al., 1987). Furthermore, recommended fruit nutrient concentrations were obtained based on surveys of small fruit populations and do not necessarily ensure fruit quality or postharvest life. Therefore, it is necessary to adjust current critical values for fruit quality purposes. Although P deficiency problems are rarely present in California, some deficiencies have been reported in other production sites where soil P concentrations are low such as North Carolina, Australia, New Zealand, and some parts of Europe, where trees have responded to P applications (Childers and Sherman, 1988). This preliminary study also suggests that low N affected the P concentration in fruit tissue. This should be studied in more detail to determine whether low N can induce low P in fruit under commercial conditions or if this result was just an artifact of our experimental design.

This preliminary work demonstrates the important role of preharvest management practices such as fertilization on postharvest life and consumer quality and encourages further research in this area.