Search for other papers by Dilip R. Panthee in
ASHS
Google Scholar
PubMedClose

‘Mountain Magic’ is the F1 hybrid of NC 2 CELBR × NC 2 Grape (Fig. 1). NC 2 CELBR is a large-fruited, determinate tomato breeding line, which combines moderate resistance to early blight with a high level of late blight resistance based on the combination of the Ph-2 and Ph-3 genes (Gardner and Panthee, 2010a). NC 2 Grape is an indeterminate, compact growth habit (brachytic, br gene) grape tomato line, which has a high sugar level and carries the ripening inhibitor (rin) gene (Gardner and Panthee, 2010b). ‘Mountain Magic’ was tested as NC 05114 in organic and conventional culture from 2005–2007 before being named and released for commercial seed production in 2008.

‘Mountain Magic’ has a fairly compact indeterminate plant with good foliage cover. Fruit are round to slightly ovate in shape. Fruit ripen to an attractive red color and are firm and highly crack-resistant (Table 1). Immature fruit have uniform light green color (u gene) and have jointed pedicels. Vine-ripened fruit are high in sugar (Table 2) and have been rated consistently as having very good flavor. The rin gene in heterozygous condition in the hybrid slows ripening and extends shelf life so that the fruit can be left on the plant for an extended period after ripening. ‘Mountain Magic’ has performed well in replicated yield trials and in grower field plantings where almost all of the fruit have been marketable because of their uniformly smooth shape and freedom from defects (Tables 1 and 2). Fruit are early in maturity, and the hybrid yields over a long production period as a result of its indeterminate growth habit. It has been successfully grown in an overhead wire trellis system pruned to a single stem (Table 1) and in a string-weave cultural system using tall stakes (Table 2). In the string-weave system, it has performed very well when pruned to remove all side shoots from the base of the plant except the shoot immediately below the first inflorescence with no additional pruning thereafter. Fruit size averaged 59 g when pruned to a single stem and 40 g with less pruning in the string-weave trellis system (Tables 1 and 2).

Fruit yield and size of ‘Mountain Magic’ tomato in organic and conventional trials using an overhead wire trellis system with plants pruned to a single stem at Waynesville, NC, in 2007.

‘Mountain Magic’ is resistant to verticillium wilt (Verticillium dahlia Kleb) conferred by the Ve gene and to fusarium wilt [Fusarium oxysporium f.sp. lycopersici (Sacc.) W.C. Snyder and H.N. Hans] races 1 and 2 (I and I-2 genes). It has the Ph-2 and Ph-3 genes in heterozygous condition, which confer a high level of resistance to late blight [Phytophthora infestans (Montagne, Bary)] (Table 1). In non-sprayed or organic trials using fungicides approved for organic production, ‘Mountain Magic’ has maintained good late blight resistance under conditions highly conducive to late blight development. Early blight [Alternaria solani (Ellis & G. Martin) L.R. Jones & Grout] resistance of ‘Mountain Magic’ has also been good under both non-sprayed and organic culture. ‘Mountain Magic’ is susceptible to septoria leaf spot (Septoria lycopersici) but has not defoliated as quickly as some other varieties grown in the same trials.

‘Mountain Magic’ provides home garden and commercial growers with a productive, high-quality tomato with a wide range of useful disease resistances. Because of its early blight and late blight resistances, it is highly adaptable to organic culture in addition to conventional culture. ‘Mountain Magic’ is comparable to the popular greenhouse hybrid ‘Campari’ in fruit size and quality, which gives growers in field production systems a hybrid competitive to this popular greenhouse hybrid. ‘Mountain Magic’ is well adapted to marketing in clamshell packages. Because of its resistance to fruit cracking and long shelf life resulting from the rin gene, fruit can be left on the plant until fully ripe, allowing the development of optimum flavor before harvest.

‘Mountain Magic’ was released to Bejo Seeds as an exclusive for seed production and sales. Seed are available through distributors for Bejo, and it is listed in numerous commercial grower and home garden catalogs. 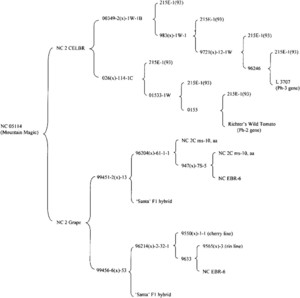