The primary strawberry (Fragaria ×ananassa Duch.) cultivar currently grown in Florida is ‘Strawberry Festival’ (Chandler et al., 2000b), which occupies ≈50% of Florida acreage and is grown in mild winter climates around the world. It has become a favorite of growers because of its steady yield of firm fruit with a low percentage of cull fruit, moderate resistance to multiple pathogens, and long shelf life. However, during the second half of the main production period (starting in late February in west central Florida), its average fruit weight decreases, sometimes to unacceptable levels. A recently released cultivar, Florida Radiance (Chandler et al., 2009), occupied ≈15% of Florida acreage during the 2010–2011 season. Its yield pattern complements that of ‘Strawberry Festival’ because it produces higher yields early in the season (late November to early December) and again in early February. It also maintains larger fruit size than ‘Strawberry Festival’ throughout the season. Weaknesses of ‘Florida Radiance’ include susceptibility to crown rot disease caused by Phytophthora cactorum (Lebert & Cohn) J. Schröt and suboptimal nursery growth characteristics, including weak petioles, which are easily damaged during nursery handling.

There is a need for a cultivar that has the steady yield, durable plant characteristics, and flavor attributes of ‘Strawberry Festival’ but that also maintains large fruit size and strong yields late in the season. Winterstar™ (‘FL 05-107’) strawberry (U.S. Patent Pending) has demonstrated these characteristics in experimental plots at the University of Florida Gulf Coast Research and Education Center (GCREC) (Balm, FL), at the Florida Strawberry Growers Association (FSGA) headquarters in Dover, FL, and in trials on several commercial farms in west central Florida and southwest Spain.

Winterstar™ strawberry originated from a 2005 cross between ‘Florida Radiance’ (female parent) and ‘Earlibrite’ (male parent) (Chandler et al., 2000a) (Fig. 1). ‘Florida Radiance’, a 2009 release from the Florida Agricultural Experiment Station, was chosen as a parent because of its early yield potential and ability to produce large, uniformly shaped fruit throughout the entire growing season. ‘Earlibrite’ was used as a parent because of its compact but sturdy growth habit and its ability to produce large early and total-season yields of attractive fruit. The selection was identified in the seedling field in early 2006 and was asexually propagated by runners for evaluation in single plot trials during the 2006–2007 and 2007–2008 seasons.

Winterstar™ was included in replicated trials during the 2008–2009 and 2009–2010 seasons at the GCREC and at the FSGA field plots during the 2009–2010 season. Each trial site was prepared and maintained according to current commercial practices for annual strawberry plasticulture in Florida. Pre-plant fumigant consisted of a 50:50 mixture of methyl bromide and chloropicrin. Strawberry plug transplants were produced at the GCREC greenhouse facilities from runners harvested from potted mother plants (not from tissue culture stock) grown in the same greenhouses. Runners were planted in plug trays and placed under intermittent mist for 7 d. After removal from the mist, the transplants were grown for five additional weeks until planting in the field during the second week in October in both years. Four replicate plots (10 plants per plot) of each genotype were planted in a randomized complete block design at each location. Plant spacing was 38 cm within rows and 28 cm between rows. Two d of intermittent overhead irrigation were applied for plant establishment, after which water and fertilizer were applied exclusively through the drip tape. All ripe fruit were harvested, graded, counted, and weighed twice a week from December through March. Fruits that were diseased, misshapen, small (less than 10 g), or rain-damaged were considered unmarketable, and the remaining fruit were weighed to determine the marketable yield in grams on a per-plant basis. Fresh fruit was transported to the USDA-ARS Citrus and Subtropical Products Laboratory in Winter Haven, FL, once each month during the 2008–2009, 2009–2010, and 2010–2011 harvest seasons for flavor evaluations by a trained sensory panel (Plotto et al., 2010). During the 2010–2011 season, fruit were transported to the Food Science and Human Nutrition Department of the University of Florida for consumer sensory evaluation. The ratings of 100 untrained panelists were collected for overall acceptability, texture acceptability, flavor intensity, sweetness intensity, and sourness intensity using the methods and rating scales of Ubeda (2011). Fruit were also transported in 2010–2011 to the Food Quality Laboratory of the University of South Florida for physical and chemical analyses. Firmness was measured using a Texture Analyzer (TA-XT Plus; Texture Technologies Corporation, Scardsdale, NY). A 50-kg load cell was used, and crosshead speed was 1.0 mm·s−1. A 7.9-mm diameter convex probe was used to determine the resistance of the fruit flesh based on a 3-mm deformation. Soluble solids content and titratable acidity were determined according to Nunes et al. (1995). Ascorbic acid was measured using the dinitrophenylhydrazine method of Terada et al. (1978), and total soluble phenolic compounds were measured using the Folin-Ciocalteu reagent as described by Nunes et al. (2005).

Winterstar™ is a short-day genotype adapted to an annual plasticulture growing system. The plant is also compact and upright with long pedicels, making the fruit easy to harvest (Fig. 2). Trials were conducted to determine the optimum in-row plant spacing on a yield per acre basis (unpublished data). Preliminary results indicate that a standard in-row spacing of 38 cm is most appropriate for this cultivar. Winterstar™ produces firm, conic fruit that are very uniform in shape throughout the season, resulting in few culls. A small internal cavity has been observed in some primary fruits, but rarely in secondary or tertiary fruits. The achenes are slightly sunken, similar in depth to those of ‘Strawberry Festival’. Average fruit weight was equal to or greater than ‘Strawberry Festival’ over two seasons but less than ‘Florida Radiance’ in 2009–2010 (Table 1). The external color of the fruit is a bright red [Royal Horticultural Society (RHS) 34B] that appears slightly lighter than ‘Florida Radiance’ but could not be distinguished based on colorimeter readings; however, the internal flesh color is lighter than that of ‘Florida Radiance’ and ‘Strawberry Festival’ (Table 2). The calyx is medium to large depending on the temperature during development and is yellow–green (RHS 141B). 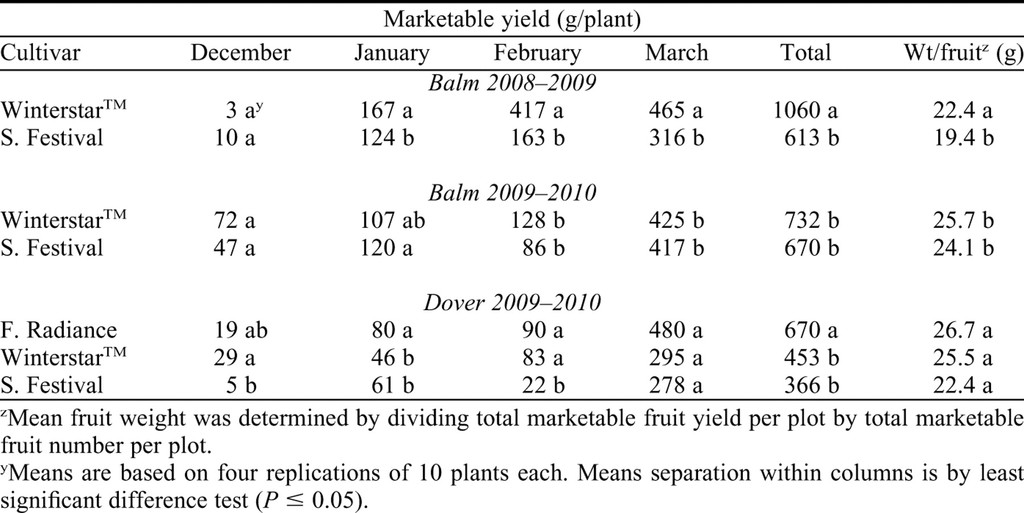 Late-season postharvest traits of ‘Florida Radiance’, Winterstar™, and ‘Strawberry Festival’ grown at the University of Florida Gulf Coast Research and Education Center (GCREC) in Balm, FL, and at Dover, FL.z 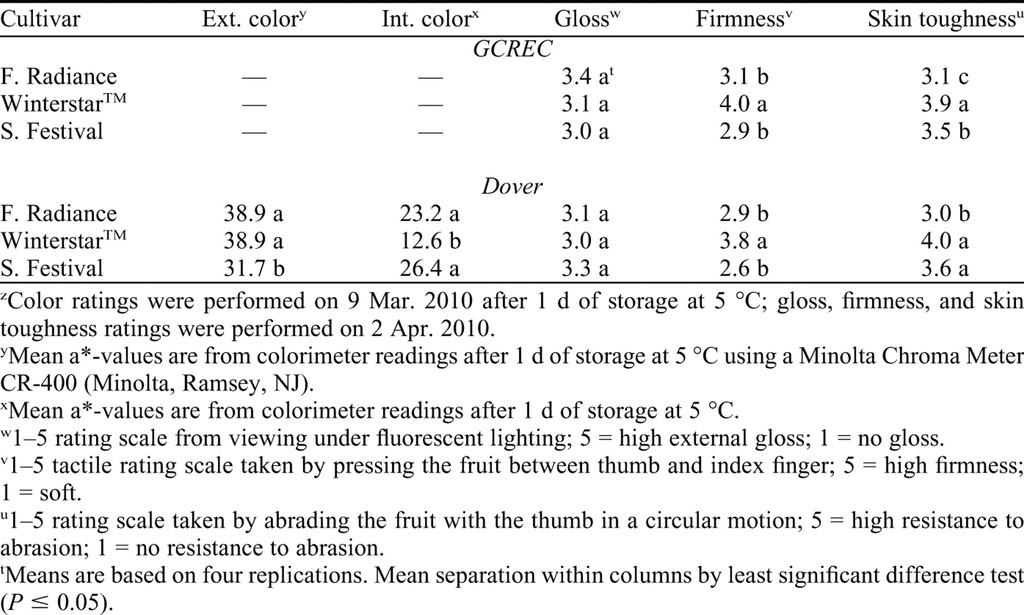 Consumer sensory data for ‘Florida Radiance’, Winterstar™, and ‘Strawberry Festival’ based on the ratings of 100 untrained panelists on 15 Feb. 2011.

In the replicated trials, yields of Winterstar™ were greater than ‘Strawberry Festival’ over two seasons and were less than ‘Florida Radiance’ during 2009–2010 (Table 1). Lower marketable yields for all cultivars in 2009–2010 were the result of multiple and prolonged freezes that occurred in Jan. 2010. However, the post-freeze reduction in yield during January and February was less severe for Winterstar™ than for ‘Strawberry Festival’ (Table 1).

An inoculated field trial was conducted for advanced selections and standard commercial cultivars during the 2009–2010 season to examine resistance to anthracnose and Botrytis fruit rots (Seijo et al., 2011). The resistance of Winterstar™ to Colletotrichum acutatum Simm. (causal agent of anthracnose fruit rot) was determined to be superior to that of the highly susceptible cultivar Treasure. Resistance to Botrytis cinerea (de Bary) Whetzel (causal agent of Botrytis fruit rot) was superior to that of the susceptible cultivar Camino Real. One year of replicated field trials for resistance to Phytophthora root rots was conducted by dipping the roots of bare-root transplants with a Phytophthora cactorum (Lebert & Cohn) J. Schröt. spore suspension before planting. Ratings were based on the timing and amount of subsequent plant wilting and collapse (unpublished data). Based on this preliminary trial, Winterstar™ is categorized as susceptible to crown and root rots caused by P. cactorum (Lebert & Cohn) J. Schröt., although symptoms were not as severe as for ‘Florida Radiance’. Nursery and fruit growers are encouraged to take precautions against P. cactorum infestation as they would for ‘Florida Radiance’ until additional data are available.

A patent has been filed under the selection number ‘FL 05-107’ by the Florida Agricultural Experiment Station. Information on nurseries licensed to propagate this cultivar can be obtained from the Florida Foundation Seed Producers, Inc. (http://ffsp.net).

Pedigree of Winterstar™ strawberry. The female parent is listed on the upper side of each bifurcation.

Plants and fruit of Winterstar™ strawberry in late Mar. 2010 in Dover, FL. 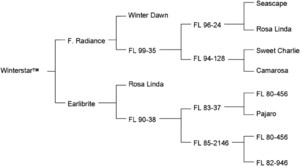 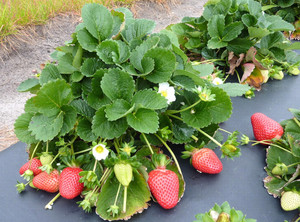