‘Gupton’, tested as MS548, was selected in 1991 by Arlen D. Draper and James M. Spiers at Stone County, MS, from a seedling population derived from a cross of MS122 × MS6 made in Beltsville, MD, in 1988 (Fig. 1), and its pedigree shows that it is a complex hybrid involving species including V. corymbosum, V. darrowi, and a small amount of V.virgatum that descended from ‘Sharpblue’ (Lyrene and Sherman, 1992). ‘Gupton’ has the same pedigree as two more recently released cultivars, Camelia (NeSmith and Draper, 2007) and Blue Suede (NeSmith and Ehlenfeldt, 2010).

‘Gupton’ produces an abundance of medium to large (greater than 2.0 g), attractive, light blue fruit (Fig. 2), and berry firmness and resistance to rain-induced berry splitting are among its notable attributes. Plants of ‘Gupton’ are upright with narrow crowns, and, in comparison with rabbiteye blueberries, mature plants require little pruning to manage excessive growth. Fifteen-year-old plants of ‘Gupton’ grown in Stone County, MS, had an average height and width of 2.08 m and 1.78 m, respectively. ‘Gupton’ produces dense green foliage and based on the Royal Horticultural Society's Color Chart, mature leaves are yellow–green 146 A, oblong in shape, and average 61.7 cm and 32.6 cm in length and width, respectively. Plants leaf normally in the spring, even after mild winters, and mature plants produce abundant fruiting wood. In south Mississippi, ‘Gupton’ flowers in mid- to late March and berries ripen in mid to late May, 12–15 d before the earliest ripening rabbiteye blueberry cultivars in the region. Comparisons of flowering dates with that of known cultivars suggest that ‘Gupton’ has a chilling requirement of ≈500–550 h below 7 °C. ‘Gupton’ propagates readily from both softwood cuttings taken in late spring and the subsequent flush of new growth in late summer as well as from hardwood cuttings taken in the winter. Although partially self-fertile, ‘Gupton’ should be planted with other southern highbush cultivars having similar bloom periods to obtain optimum pollination. It is estimated that ‘Gupton’ will perform well in USDA hardiness zones 6a to 9a.

Plant and berry attributes of mature plants of ‘Gupton’, two standard southern highbush cultivars, and two early-ripening rabbiteye blueberry cultivars were evaluated over 6 years from 2001–2005 at Stone County, MS, near the DeSoto National Forest in south central Mississippi. Plants were established in 1996 and grown in an acidic (pH 5.2) soil using ≈1 kg peatmoss mixed with soil in each 0.5 m × 0.5-m planting hole spaced at 1-m intervals on raised beds. Mature plants were mulched with pine bark, watered 12 h per week by drip irrigation, and fertilized with a total of 37.32 kg nitrogen, 13.06 kg phosphorus, and 13.06 kg potassium each season. Table 1 presents subjective field evaluations of cropping, berry color, size and flavor, plant vigor, and flowering and ripening periods of ‘Gupton' and the standard southern highbush cultivars O'Neal (Ballington et al., 1990) and Star (Lyrene and Sherman, 2000) and the rabbiteye cultivars Premier and Climax taken from two single plant replications each year. Date of 50% bloom was estimated from biweekly subjective observations of percentage of flowers having open corolla. Blooming of ‘Gupton’ flowers was consistently later than ‘Star’ or ‘O'Neal’ and was sufficiently late to avoid injury from most late spring frosts occurring during the evaluation period. Date of 50% ripening was determined by biweekly observations on percentage of berries having completely blue color. ‘Gupton’ ripened 10–12 d later than the two southern highbush standards but 13–17 d earlier than early-season rabbiteye cultivars. ‘Gupton’ had lighter blueberry color than all other cultivars and berry picking scars were comparable to the southern highbush standards. Ratings of berry flavor were based on experience in evaluating flavors in commercial cultivars, germplasm, and breeding lines and indicated that flavor of ‘Gupton’ was comparable to ‘Star’, ‘O'Neal’, and ‘Premier’, all of which outscored ‘Climax’. Crop load estimates were based on visual observations of total numbers of berries per plant, and vigor ratings were based on observations of overall plant health and production of new leaves and fruiting wood. Both crop load and plant vigor of ‘Gupton’ were consistently comparable to that of ‘Star’, greater than ‘O'Neal’, but less than either of the two rabbiteye standards.

Field evaluations ratings of fruit and plant characteristics of ‘Gupton’, two southern highbush (‘O'Neal’ and ‘Star’), and two rabbiteye (‘Climax’ and ‘Premier’) standard cultivars over a 6-year period (2001 through 2006) at Stone County, MS.z

Laboratory evaluations of berry quality attributes were conducted in 2004 and 2008 from two replications of each cultivar. Berry size was determined from the average weight of 100 fully ripe berries. Berry firmness measurements were obtained from 20 berry samples analyzed on a Firmtech II (Bioworks Corp., Stillwater, OK), an apparatus that measures firmness in terms of the rate (g·mm−1) at which force increases as berries are squeezed and deflected. Tendencies of berry splitting were measured by soaking 50 fully ripe berry samples in distilled water 24 h and counting the number of split berries (Marshall et al., 2007). Soluble solids content and pH were determined from juice extracted from a puree of a 40-g sample placed into a commercial Waring® blender (Dynamics Corp. of America, Hartford, CT) and strained through cheesecloth. A handheld temperature-compensating refractometer (Leica Microsystems AR 200, Welzar, Germany) was used to measure juice soluble solids concentration. Berry pH was measured using an AR20 pH/conductivity meter (ThermoFisher Scientific Corp., Waltham, MA). In comparison with other cultivars evaluated, berry size was greatest for ‘Gupton’ (2.2 g). Berry firmness, an attribute of considerable importance in mechanical harvesting and shipping, was also notably greater for ‘Gupton’ than the standard southern highbush and rabbiteye blueberry cultivars. ‘Gupton’ also showed very low potential for rain-induced physiological splitting, which can be problematic during wet harvest seasons. Berry pH of ‘Gupton’ was higher than the rabbiteye blueberry standards but lower than that of ‘O'Neal’, whereas soluble solids content was higher than all cultivars except ‘Climax’ (Table 2).

‘Gupton’ is a public domain blueberry cultivar and a limited supply of rooted cuttings, cutting wood, and tissue-cultured plants is available to certified nurserymen. Written requests for plant materials should be sent to Dr. Stephen Stringer, USDA-ARS Thad Cochran Southern Horticulture Laboratory, P.O. Box 287, Poplarville, MS 39470. Genetic materials of this release are deposited in the National Plant Germplasm Repository at Corvallis, OR, where it is available for research purposes and commercial development.

Berries of ‘Gupton’ during ripening. 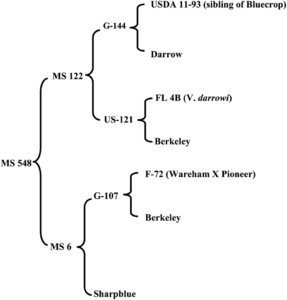 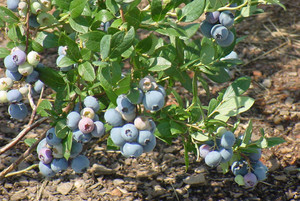