Mammoth™ ‘Yellow Quill’ (U.S. Plant Patent 15,027; Canadian Plant Breeders’ Rights Certificate No. 2951) is a new interspecific garden chrysanthemum cultivar, Chrysanthemum ×hybridum Anderson (=Dendranthema ×hybrida Anderson) with common names of hardy mum, chrysanthemum, and garden mum. It is a new and distinct form of shrub-type garden mum in the Mammoth™ series with spoon-shaped ray florets, frost-tolerant flower petals, self-pinching growth, and serves as a butterfly attractant in the garden. Mammoth™ ‘Yellow Quill’ is a winter-hardy herbaceous perennial in USDA Zones 4–9 with its cushion growth form displaying extreme hybrid vigor, increasing in plant height from 0.46 m in its first year to a shrub of 0.84–1.07 m in the second year, and thereafter with greater than 3000 leaves/plant. Flowering is prolific, covering the entire plant at full flowering and sporting as many as greater than 3500 flowers in Year 2.

This cultivar displays a cushion plant shape (Table 1) after planting in fields and gardens; this is maintained for the life of the plant. Like with other cultivars in the Mammoth™ series (Anderson et al., 2008), Mammoth™ ‘Yellow Quill’ exhibits vigorous growth such that in Year 2 and thereafter, it attains the shrub plant habit of 0.84–1.07 m in height (Table 1) compared with Year 1 plant height of 0.46 m (Table 1). Lateral branches (one/node) initiate without removal of the apical meristem (pinching), reaching a mean length of ≈36.8 cm. Younger stems have coloration of RHS grayed purple 183B, whereas older ones classify as RHS yellow–green group 152A.

The number of leaves/lateral branch ranges from five to 19 with alternate phyllotaxy (one leaf/node). In Year 2, there are an average of greater than 3000 leaves/plant (based on actual counts) (Anderson et al., 2004). Fully expanded leaves average 7.4 cm × 4.4 cm (length × width) ending in a trimucronulate apex, possessing an auriculate leaf base with incised leaf margins (Morus-like shape) and a fairly glaucous surface. Mean petiole lengths are 3.1 cm. Young foliar coloration is RHS green group 137B (adaxial surface) and 137C (abaxial), changing to 137A (adaxial) and 147B (abaxial) on maturity. Leaf venation in mature leaves ranges from RHS yellow–green group 147C (adaxial) to 148B (abaxial), whereas the petiole is uniformly RHS yellow–green group 148B.

Phyllaries (involucral bracts) are crenulate with a glabrous texture, ranging from 0.2 to 0.4 cm in length and uniformly in the RHS green group 137A. The inflorescence is a composite (Asteraceae) of numerous disc and ray florets and is classed as a single daisy quill or spoon (one row of ray florets that are primarily quilled, but occasionally spooned, i.e., quill tubular florets with flattened tips). Mammoth™ ‘Yellow Quill’ flowering is classified with a 6-week short-day response group (Table 1) with ≈500 and greater than 3500 inflorescences (mean) in Years 1 and 2, respectively. Flower longevity of 2 to 4+ weeks in the field is temperature-dependent. Flower petals are frost-tolerant (Anderson et al., 2004).

Opening inflorescences have upright, twisted petals with a mean bud size of 2.5 × 1.4 cm (length × width) and RHS yellow group 5C coloration. When completely open, inflorescences are 8.3 cm (diameter) × 1.7 cm (depth), whereas the discs are 1.5 cm (diameter). Ray florets (mean of 36.6/inflorescence but ranging as high as 60) have a tubular quill petal (rolled) often with a flattened end or “spoon” (glabrous; 3.9 × 0.4 cm) with biretuse apices, attenuate bases, rolled (entire) margins, and positioned at ≈45° angle to the stem axis. Ray florets (gynoecious) during elongation (opening) are RHS Yellow Group 3A and 4B, whereas those at anthesis or maturity are 3C and 5C for adaxial and abaxial surfaces (Table 1), respectively. There is 1 ovule each/ray and disc floret. Ray florets fade in color to RHS yellow group 3C.

Disc florets (hermaphroditic) are tubular with a rounded tip, 0.5 × 0.1 cm (length × width) with a mean of 115/inflorescence. Immature disc florets are RHS yellow group 4C in color, changing to RHS yellow–orange group 15A on maturity (pollen dehiscence). Hirsute peduncles are RHS green group 131C in color, held stiffly at a 45° angle to the stem, with lengths of 3.3 cm (first) to 4.9 cm (fourth). Anthers and trinucleate pollen are both colored RHS yellow–orange group 16A, whereas the styles are RHS yellow group 11D.

The dry, indehiscent fruit is an achene with a single seed and lacks a pappus of awns for bristles. A half-inflated football, oval shape, and ridged texture characterizes the shape of each achene. Mature seeds are 0.2–0.5 cm × 0.1–0.2 cm (length × width) with RHS brown group 200D color.

Mammoth™ ‘Yellow Quill’ is a facultative short-day plant (Anderson et al., 2004). This cultivar may be grown for spring bedding plant sales (Mother's Day) in liners (Fig. 2). After consumers enjoy the flowers in May, the liners are planted in the garden or containers for subsequent regrowth and fall flowering (Fig. 3; Anderson et al., 2008; Langevin, 1992). Mammoth™ ‘Yellow Quill’ may also be grown outdoors in “mum pans” to form flowers under naturally shorter daylengths for sale as larger plants in the fall. If either type is overwintered, the plants will display the shrub habit in Year 2 and onward (Fig. 4).

To maximize summer growth potential, both in containers and direct-planted, full sun is required along with intensive fertilization and irrigation (Anderson, 2006; Anderson et al., 2008). Mammoth™ ‘Yellow Quill’ is classified as a “heavy” feeder requiring as much as 1361 g/30.48 m2 of 5–20–20 preplant fertilizer or weekly 300 ppm N 20–10–20 postplant soluble fertilization (Anderson et al., 2008).

All Mammoth™ garden chrysanthemums are notably winter-hardy herbaceous perennials that are butterfly attractants and frost-tolerant. Mammoth™ cultivars have standard plant dimensions in the first year (Anderson et al., 2001) but achieve shrub status in Year 2 (Anderson et al., 2004, 2008). The Mammoth™ series is a collection of low-maintenance perennials resulting from their genetic “self-pinching,” removing the necessity to hand or mechanically pinch terminal shoots in midsummer to form the cushion habit (Anderson et al., 2008). Mammoth™ ‘Yellow Quill’ may be grown as a specimen shrub within the garden in Year 2 (Anderson, 2006) but should be spaced as much as 1 m away from adjacent plants. This cultivar may also be grown as a flowering hedge, spacing the plants 0.3–0.6 m on center. Likewise, Mammoth™ ‘Yellow Quill’ is well-suited for large container plantings in landscapes, providing fall color at eye level. 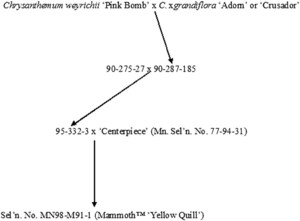 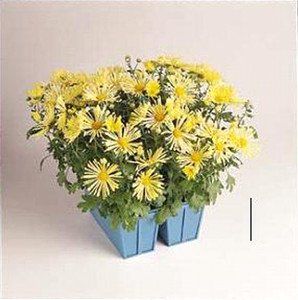 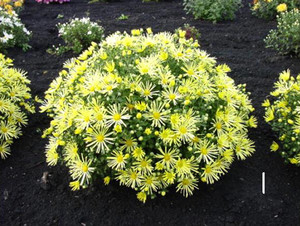 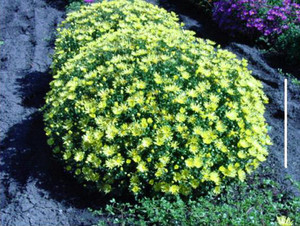