Japanese apricot (Prunus mume Sieb. et Zucc.) originated in China and has been widely cultivated in Asia for ≈3000 years (Chu, 1999). Owing to its charming flowers and flavorsome fruit, it has been widely planted as an ornamental plant and an economic fruit tree; its fruit is consumed as a preserve and a drink in China (Shi et al., 2009). The cultivars of japanese apricot in Taiwan have the lowest chilling requirements in the world (Ou and Chen, 2003). Owing to being greatly restricted by climatic conditions, especially related to chilling accumulation, the distribution of japanese apricot is limited to East Asia, including China, Japan, and Korea; it is rarely cultivated in other countries (Ou and Chen, 2003). Therefore, we studied the chilling and heat requirements of japanese apricot to help producers breed new cultivars and to assist horticulturists in other countries to introduce the appropriate cultivars.

The study of the phenological behavior of crops, as part of a well-characterized environment, is important both to obtain satisfactory production and to determine the most suitable agronomic techniques (Valentini et al., 2001). Many fruit and nut crops require chilling accumulation in winter to break dormancy. Quantifying this chilling requirement and selecting appropriate cultivars for the climate of a given region are crucial for successful cultivation of such crops. If the chilling requirement is not satisfied, budbreak will be uneven and delayed, shoot vigor will be reduced, and flower development will be poor (Campbell and Sugano, 1975). On the other hand, in the case of low chilling requirements (e.g., early-flowering cultivars growing in cold-winter areas), blooming happens too early and freezes can reduce yield (Bartolini et al., 2006). The information of the chilling requirement of a cultivar has significant practical and economic impacts on the control, maintenance, and production of woody plants (Fennell, 1999) and is necessary for crop management of japanese apricot cultivars in their most suitable areas.

To better quantify winter chilling accumulation, past researchers have developed several chilling models. Temperature has been described as the most decisive climatic factor. The Weinberger model (Weinberger, 1950), still widely used, is the oldest method to quantify winter chilling accumulation. The Utah model (Richardson et al., 1974), which is most widely used, contains a weight function assigning different chilling efficiencies to different temperature ranges, including negative contributions by high temperatures. The dynamic model (Fishman et al., 1987a, 1987b), which overcomes some difficulties of the Utah model, especially in mild-winter climates, postulates that winter chilling accumulates in a two-step process. Initially, cold temperatures lead to the formation of an intermediate product. Once a certain quantity of this intermediate has accumulated, it can be transformed into a “chill portion.” In this age of global warming, many researchers have tested which chilling model is best in different regions of the world (Luedeling, 2009a, 2009b, 2009c, 2011; Rahemi and Pakkish, 2009).

The difficulty that a number of deciduous fruit trees have in adapting to environmental conditions different from those of their origin is well known and is mainly the result of the need for adequate satisfaction of their chilling requirements for flowering. Problems related to the inaccurate selection of cultivars with unsuitable chilling requirements affect japanese apricot production. Many growers used winter chilling accumulation to determine the timeline for certain management measures, such as the spraying of rest-breaking chemical agents, or to predict yield potential (Erez, 2000).

The experiments were conducted in three consecutive years (2009–12) in the experimental orchard of the National Field Genebank for japanese apricot (Nanjing, China). Hourly temperatures were collected from November to April by a thermohygrograph and an automatic data logger (Hangzhouzeda Instrument Co., Ltd., Hangzhou, China).

From the beginning of the chilling accumulation, five branches of each cultivar (with lengths of ≈25 cm and diameter of 5 mm) were collected weekly from trees in the orchard and the bases were placed in a 5% sucrose solution in a growth chamber, making a fresh cut at the base of the branches. The branches were maintained at 25 ± 1 °C under white fluorescent tubes (55 μmol·m−2·s−1) during a photoperiod of 16 h and at 18 ± 1 °C during the dark period of 8 h with a constant relative humidity of 70%. The sucrose solution was refreshed and bases cut every 3 d. The development stage of the flower buds was recorded after 10 d in the growth chamber.

Determination of chilling and heat requirements.

The start date for chilling accumulation was considered to be when a consistent chilling accumulation occurred and the temperatures producing a negative effect (chilling negation) (Erez et al., 1979; Guerriero et al., 2002; Richardson et al., 1974) were rare. Both physical and physiological parameters were used to determine the date of breaking of dormancy (Campoy et al., 2010, 2012; Guerriero et al., 2002; Ruiz et al., 2007). From the sampled branches, three replicates of 20 flower buds were sampled before and after forcing. The date of breaking of endodormancy was established when, after 10 d in the growth chamber, 30% of the flower buds were in Baggiolini’s stage B to C (green tip) (Baggiolini, 1952), and there was at least an average 30% increase in bud weight. The chilling requirements coincided with the chilling accumulated until the date of dormancy release. Determination of chilling requirements was by hours between 0 and 7.2 °C for the Weinberger model (Weinberger, 1950), chill units for the Utah model (Richardson et al., 1974), and chill portions for the dynamic model (Fishman et al., 1987a, 1987b).

The equations for the Weinberger model are as follows (Weinberger, 1950):

The equations for the Utah model are as follows (Richardson et al., 1974): 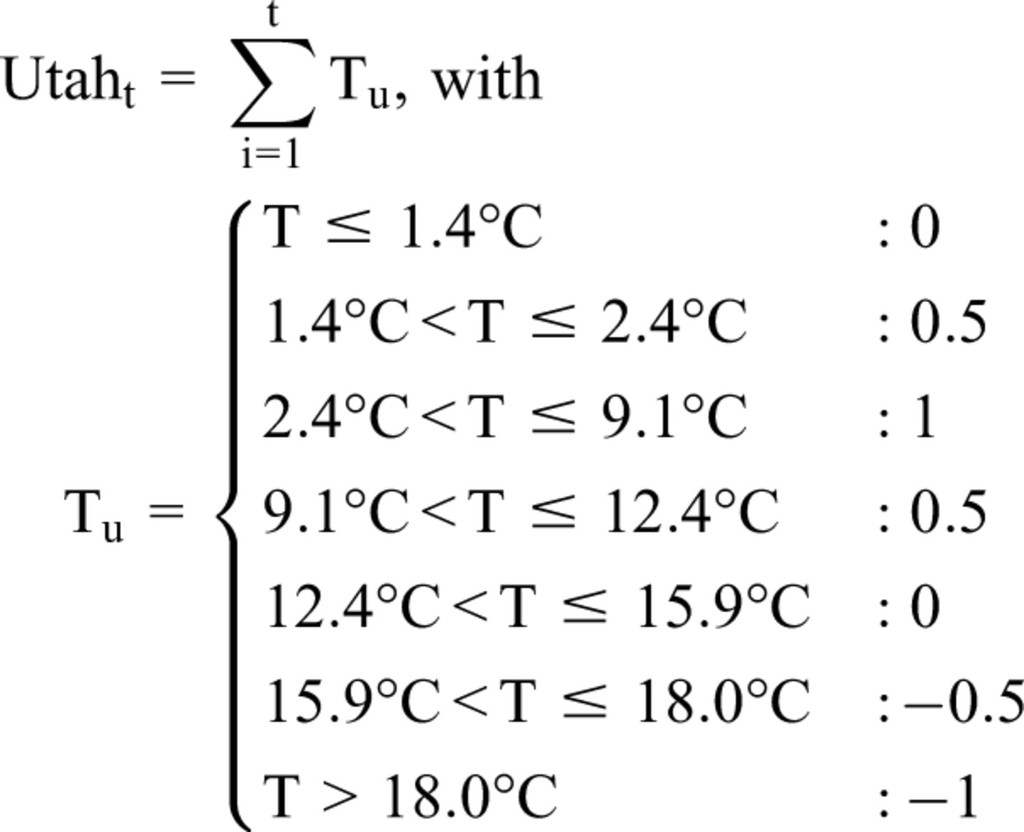 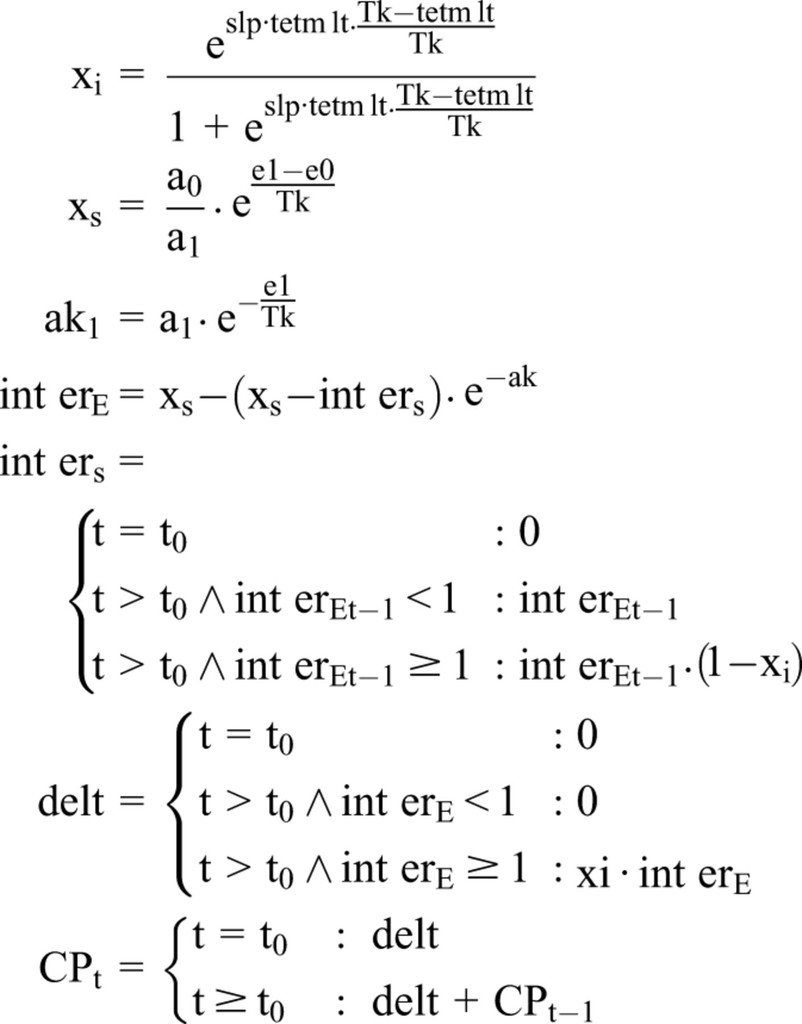 Heat requirements were calculated as GDH following the model proposed by Richardson et al. (1974). GDHs are hourly average temperatures (°C) minus 4.5 °C, which are accumulated daily. For each cultivar, heat requirements were calculated as the number of GDH accumulated between the end of dormancy and the date when 50% of flowers were open (F50) in the orchard. The length of this period was expressed as the increment of Julian days (delta JD). We determined delta JD as a complement for GDH, because delta JD is highly dependent on the temperature conditions of the area and year.

Statistical analyses were performed using SPSS 17.0 for Windows (SPSS Inc., Chicago, IL) and Duncan’s multiple range test. Correlation coefficients were determined as Pearson’s coefficients. The differences between groups were determined by Tukey’s b test (P < 0.01). The cvs (σ/μ × 100) were calculated to assess the variability of chilling requirement among cultivars and years using the different models.

Chilling accumulation under field conditions according to the Utah model, dynamic model, and Weinberger model.z 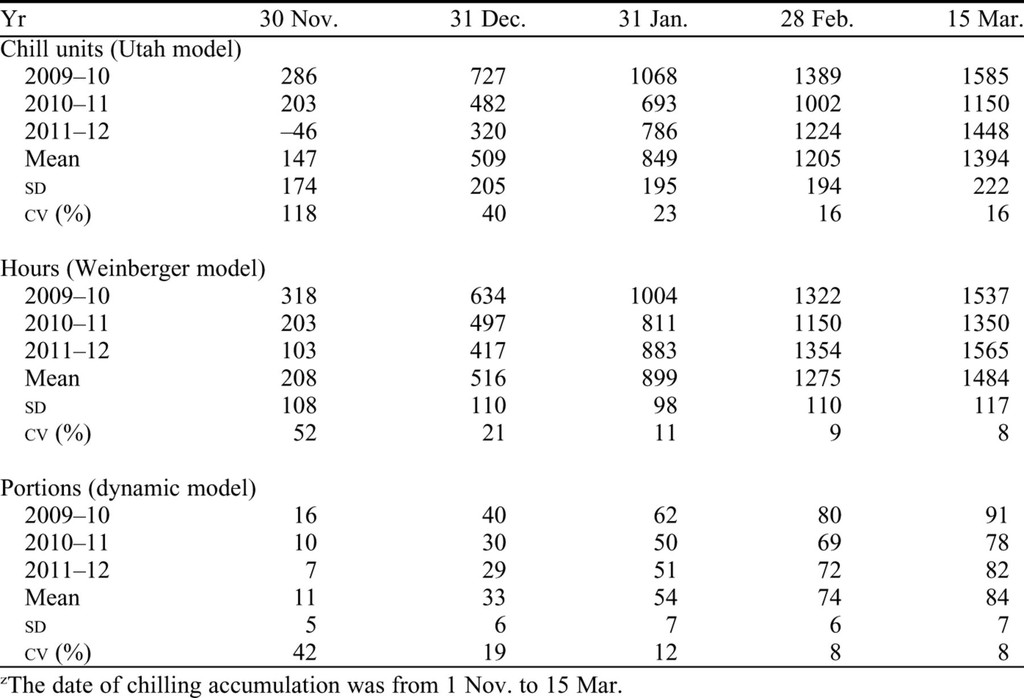 Chilling requirements for breaking of dormancy.

Differences in bud weight on cuttings were evident between cultivars, and the end of dormancy was sharper in some cultivars than in others (Fig. 1). Bud weight of ‘Fenghou’ and ‘Yanhua’ did not increase as much as that of the other four cultivars despite considerable chilling accumulation, probably because they did not accumulate enough chilling requirements that year or because few flower buds were present.

Correlations between various factors related to the breaking of dormancy and time of flowering in japanese apricot. 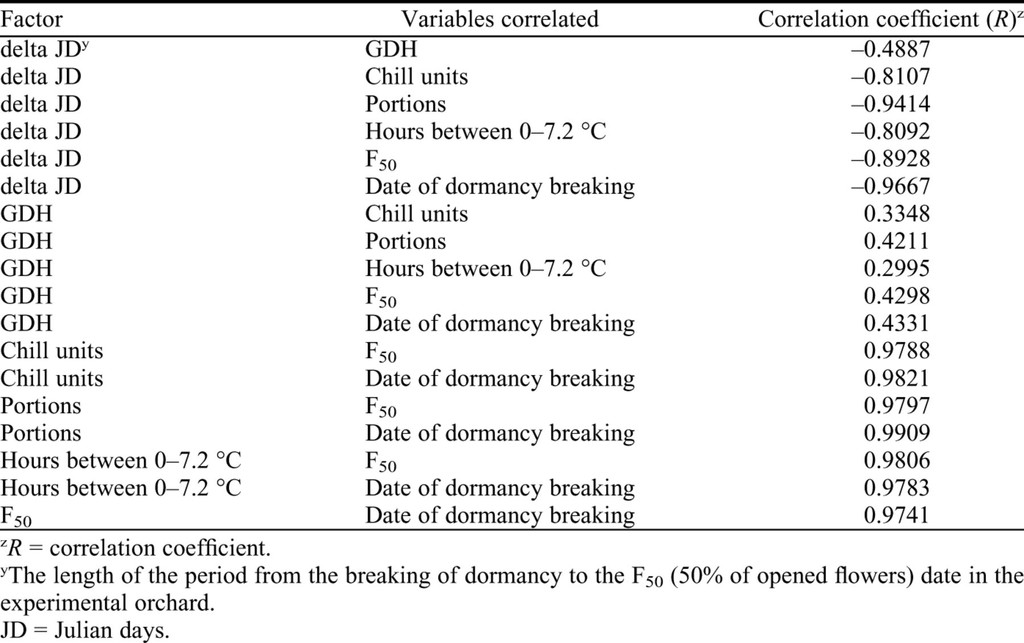 Chilling accumulation in the field.

In our study, the variability of chilling accumulation was very high when the Utah model was used (Table 1), which may be the result of the mild winter climate of Nanjing. Meanwhile, the high temperature registered in the late fall and early winter of 2011–2012 delayed the onset of chilling accumulation compared with the other two years (Table 1). The variability between years is similar with both the Weinberger model and dynamic model, which show lower variability than the Utah model. The dynamic model, as a result of its convincing theoretical framework and its application in both cool and warm areas, has proven to be a most appropriate method to determine the chilling requirements of deciduous fruit. Therefore, we applied the dynamic model to measure chilling requirements or total chilling accumulation for selecting the appropriate cultivar in Nanjing.

Chilling requirements for breaking of dormancy of japanese apricot cultivars.

The dynamic model has a lower cv than the Utah and the Weinberger models in three successive studied years. As a result of its convincing theoretical framework and wide application, we recommend it to quantify chilling requirements of japanese apricot under warm climatic conditions such as in Nanjing. However, more complex and more accurate models are needed to open new avenues in better understanding the complex process of dormancy. 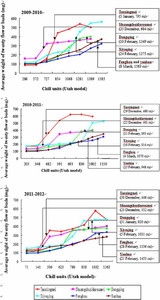