Tropical hibiscus (Hibiscus rosa-sinensis L.), also commonly known as the shoe flower or chinese hibiscus, is a widely planted tropical flowering shrub throughout the world. This cultivated species is generally a highly heterozygous polyploid of complex ancestry (Singh and Khoshoo, 1970). At least 27 chromosome numbers have been reported for this species (Singh and Khoshoo, 1989) making determination of the basic number very difficult with a solitary report of 18 by Thombe (1959) being the lowest and widely accepted count. The Linnaean plant type had red double flowers and was believed to be native to China where it was cultivated for its showy flowers (Kimbrough, 1997), although no wild forms of the species are known to exist there. An alternate view is that the species is native to the south Indian Ocean islands with Madagascar as the center of origin. This view is supported by the fact that species from the region are genetically compatible with H. rosa-sinensis and that the Polynesian migration parallels the distribution of the species to China and eventually throughout the entire Pacific region. Species indigenous to the region thought to play a major role in the development of the modern H. rosa-sinensis of commerce include the south Indian Ocean island species H. schizopetalus Hook., H. liliiflorus Cav., H. fragilis DC., and H. boryanus Hook and Arn. in combination with the Pacific Island species H. kokio Hillebrand, H. arnottianus Gray, H. wimeae Heller, H. denisonii auct., and H. storckii Seeman (Singh and Khoshoo, 1989).

Seed set in H. rosa-sinensis is extremely rare under normal conditions in the tropics (Sharma and Sharma, 1962), but the species has moderately high pollen fertility of ≈60% (Singh and Khoshoo, 1989). Research in Italy verified that setting seed on H. rosa-sinensis can be very difficult but can be improved with proper attention to environmental conditions during pollination. Highest seed set was achieved in the spring and fall in moderate shade when the temperature ranged from 16 to 27 °C and dew point was between 10 and 16 °C (Mercuri et al., 2009). As measured by seed set, some H. rosa-sinensis cultivars make better female parents, whereas others make superior male parents (Lawton, 2004).

Tropical hibiscus plants display great diversity in flower color, size, and shape as well as plant habit. As compared with older hibiscus cultivars, modern tropical hibiscuses generally bloom more profusely, have more diverse intense flower colors, and are cutting-propagated instead of grafted (Dickey, 1950; Lawton, 2004). Breeders have traditionally focused on developing cultivars adapted to either of two basic market segments, florist grade and landscape types. Florist-grade hibiscus cultivars are developed for the flowering pot plant market and generally need to be compact, responsive to growth regulators, have high bud counts under greenhouse production environments, and have greener denser foliage. Outdoor patio hibiscus cultivars are developed for the landscape trade and can be planted in the ground in warmer climates such as Florida or California or used as summer potted accents on patios and around pools. Faster growth to fill larger pots, climatic tolerance, and extended bloom cycle are traits valued in this group (Lawton, 2004). Both ‘USS Arizona’ and ‘USS California’ were selected for the outdoor patio market.

The two new tropical hibiscus cultivars are products from a planned hibiscus breeding program conducted by the inventors at Poplarville, MS. The objective of the research is to create new, well-branched hibiscus cultivars with attractive flower colors in combination with other desirable horticultural traits including dense crowns appropriate for larger containers or landscape deployment, early and uniform flowering over an extended bloom cycle, and good garden performance during hot, humid summers.

Both cultivars originated from a cross-pollination of H. rosa-sinensis ‘Caroline’ (PP11,779) as the female, or seed, parent and H. rosa-sinensis ‘Cherie’ as the male, or pollen, parent. ‘Caroline’ is characterized by glossy foliage, dense symmetrical plant habit and numerous orange flowers. ‘Cherie’ is marketed extensively as a flowering pot plant as a result of outstanding production traits and prolific yellow–orange flowers. The new cultivars were discovered and selected by the inventors as flowering plants within the progeny of the stated cross-pollination in a controlled greenhouse environment at Poplarville, MS, in 2005. ‘USS Arizona’ and ‘USS California’ are intermediate between the two parents for most horticultural traits but have improved flower color and garden performance (Fig. 1).

‘USS Arizona’ and ‘USS California’ were selected for use as accent plants for patios, pools, or other outside areas in climates with warm summers or as perennial flowering landscape shrubs in USDA hardiness zones 9 and 10. The cultivars were selected for their exceptional vibrant flowers, well-branched growth habit, and environmental tolerance in hot, humid summers typical of the southeastern United States, but should also exhibit good summer performance in areas of the country with more moderate summers.

Plants of ‘USS California’ are semicompact with an upright spreading growth habit with prolific production of yellow (yellow 12B) flowers of moderate size (11.5 to 13.5 cm) with a small white, then red swath of color at the base of each petal, which is perceived as a small red eye in the flower (Fig. 3). Pronounced white veins in the petals give flowers a textured appearance. Flowers open for 2 d and then fall from the plants. No production of seed pods has been observed, even after hand pollination. Foliage is dull green (green 138B) with leaves measuring ≈7 × 9 cm. Growth and foliage color is more stable than many other yellow-flowered H. rosa-sinensis cultivars. During nursery production, plants develop rapidly in containers and display good tolerance to common pests. Maximum plant size is dependent on container size and climatic conditions. Plants grown in a No. #3 nursery pot were 0.8 m high × 0.4 m wide within six months under optimum production conditions. Under tropical landscape conditions plants, should mature to ≈2.5 m high × 1.5 m wide.

‘USS Arizona’ and ‘USS California’ are adapted to production for use as accent plants on decks, patios, and pool areas where the plant form and rich flower colors can be appreciated. In cooler climates, plants used outdoors should be placed in warm locations sheltered from cool winds. The cultivars may also be used as woody perennial plants in landscapes as hedges, specimen plants, and corner plants in tropical climates in USDA hardiness zones 9 and above. Plants should be grown in full sun but respond to afternoon shade in regions with intense summer sun. Other cultural practices for maximum flowering and plant development conform to established practices for H. rosa-sinense clones. No unusual insect or disease pests have been observed on plants growing in Poplarville, MS, and Sarasota, FL, but strict pest management programs are required during production, like with any other tropical hibiscus.

‘USS Arizona’ and ‘USS California’ are easily propagated from softwood stem cuttings or branched-shoot cuttings using standard practices (Dole and Wilkins, 1999). The best rooting material should be taken from actively growing stock plants. Asexual reproduction of the new cultivars at Poplarville, MS, and Sarasota, FL, since 2007 has shown that the unique features of each cultivar are stable and reproduce true to type in succeeding generations. The response of the clones to growth regulators has not been researched.

Additional information or a list of nurseries propagating ‘USS Arizona’ and ‘USS California’ is available on written request to Cecil Pounders; USDA-ARS (e-mail: Cecil.Pounders@ars.usda.gov). The USDA-ARS does not have plants for sale. In addition, specimens of the releases have been deposited in the National Plant Germplasm System where they will be available for research purposes. It is requested that appropriate recognition be made if this germplasm contributes to the development of other new cultivars. 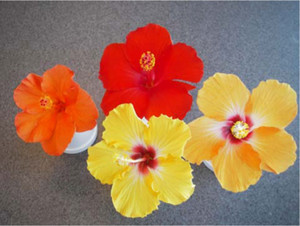 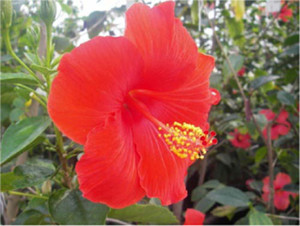 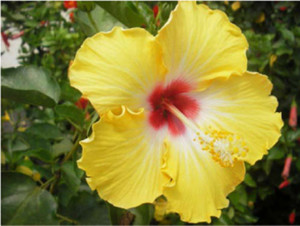