‘Orleans’ sweetpotato [Ipomoea batatas (L.) Lam.] was developed by the Louisiana Agricultural Experiment Station to provide an orange-fleshed, light rose-skinned cultivar similar to ‘Beauregard’ (Rolston et al., 1987) with superior storage root shape and disease resistance similar to ‘Beauregard’. ‘Orleans’ produces excellent numbers of uniform plants. Days to harvest for ‘Orleans’ and ‘Beauregard’ are similar in the Gulf South production region. ‘Orleans’ in North Carolina appears competitive with other commercial cultivars; however, roots of ‘Orleans’ are too long in California to warrant production. The roots are elliptical and consistent in shape in varied soil types outside of California. Because it has superior shape, yields are equal to and mostly superior to ‘Beauregard’ for the U.S. #1 grade (5.1 to 8.9 cm diameter, 7.6 to 22.9 cm long) in Louisiana and other Gulf South states.

Initially identified and evaluated as LA 05-111, the cultivar is named after the city of New Orleans.

‘Orleans’ originated in 2005 as a seedling from an open-pollinated polycross nursery of the previous year. The female lineage is ‘NC97A-04’ from the North Carolina State University Sweetpotato Breeding Program. The female lineage derived from open-pollinated nurseries is NC92-05, NC1528, and ‘Regal’, originally tested as W-152 (Jones et al., 1985).

A typical inflorescence of ‘Orleans’ has two to four clusters of three to six flowers per peduncle. Individual flowers are ≈4.5 cm long from the base of the calyx, and the corolla is 3.5 to 4.0 cm wide at the opening. The inner and outer limbs of the corolla (corollas outermost area, distal from the calyx) are very light purple [2.5 R (red) P (purple) (3/6)]. The darker inner throat of the corolla appears purple [2.5 R (red) P (purple) (3/6)]. Stigmata appear purple [2.5 R (red) P (purple) (7/6)]. Four of the five stamens are inferior to stigmata and attached to the ovary. Storage roots are elliptical without lobing and consistent in shape. Skin is light rose [10R (red) 6/4] and similar to ‘Beauregard’ clones (B-14 and B-63) (<http://www.lsuagcenter.com/en/our_offices/research_stations/Sweetpotato/Features/varieties/index.htm>). The ‘Orleans’ cortex is 4 to 5 mm in depth and similar to ‘Beauregard’. The flesh of ‘Orleans’ is orange [2.5 Y (yellow) R (red) 7/10] and similar to ‘Beauregard’. Dry matter content is ≈21% and similar to ‘Beauregard’ using methodology of La Bonte et al. (2000).

‘Orleans’ is currently under trial for relative insect resistance, but it has not demonstrated any unusual propensity to insect damage in numerous on-farm trials.

‘Orleans’ was compared with ‘Beauregard’ in randomized complete block trials with three or four replications at various locations in Louisiana, Arkansas, Mississippi, and Alabama. There were three to seven trials each year over a four-year period (2008 to 2011). These covered a wide range of planting dates and growing days. ‘Orleans’ produced yields comparable to and exceeding ‘Beauregard’ in regional trials at various planting dates (Table 1). Yield in sandy loam soils (Montrose, AR; Elberta, AL; Bonita, LA) and silt loam soils (Wisner, LA) showed ‘Orleans’ ranked higher in yield of U.S. #1 grade in comparison with ‘Beauregard’ in 19 of 24 test plots. Replicated plots have shown ‘Orleans’ has consistent yields for early-, middle-, or late-season plantings. Yield declines are within norms in poor environments. ‘Orleans’ has harvestable roots ≈115 to 120 d after planting, which is the typical development time for sweetpotatoes and comparable to ‘Beauregard’. The yield of Jumbo grade (larger than U.S. #1 in diameter or length or both and without objectionable defects) is consistently less in comparison with ‘Beauregard’ and indicative of a more consistent root set skewed toward U.S. #1 grade. In 24 trials, ‘Beauregard’ ranked higher in 21 trials for Jumbo grade in comparison with ‘Orleans’; total yield differs little between ‘Orleans’ and ‘Beauregard’. Root production was also evaluated in numerous locations throughout the United States in the National Sweetpotato Collaborator trials in 2011 (<http://www.nscg.viazivitamu.org/>). Yield of ‘Orleans’ for U.S. #1 grade was competitive with ‘Beauregard’ and ‘Covington’ in trials in North Carolina, the largest U.S. production region for sweetpotato. ‘Orleans’ ranked first in comparison with these two varieties in one trial and third in a second trial (C. Yencho and K. Pecota, North Carolina State University, Raleigh, NC). In California, U.S. #1 yield is not competitive with other commercial dessert-type cultivars (S. Stoddard, University of California Cooperative Extension, Merced County, CA). In total, these data reflect consistent high yield characteristics for ‘Orleans’. Plants of ‘Orleans’ from propagation beds are prolific and similar to ‘Beauregard’; however, elongation is slower than ‘Beauregard’ and comparable to ‘Covington’ (Yencho et al., 2008). No differences in storage quality are noted in comparison with ‘Orleans’ and ‘Beauregard’; roots are sound and marketable after six to seven months of storage.

Yield by grade of ‘Orleans’ in replicated trials. 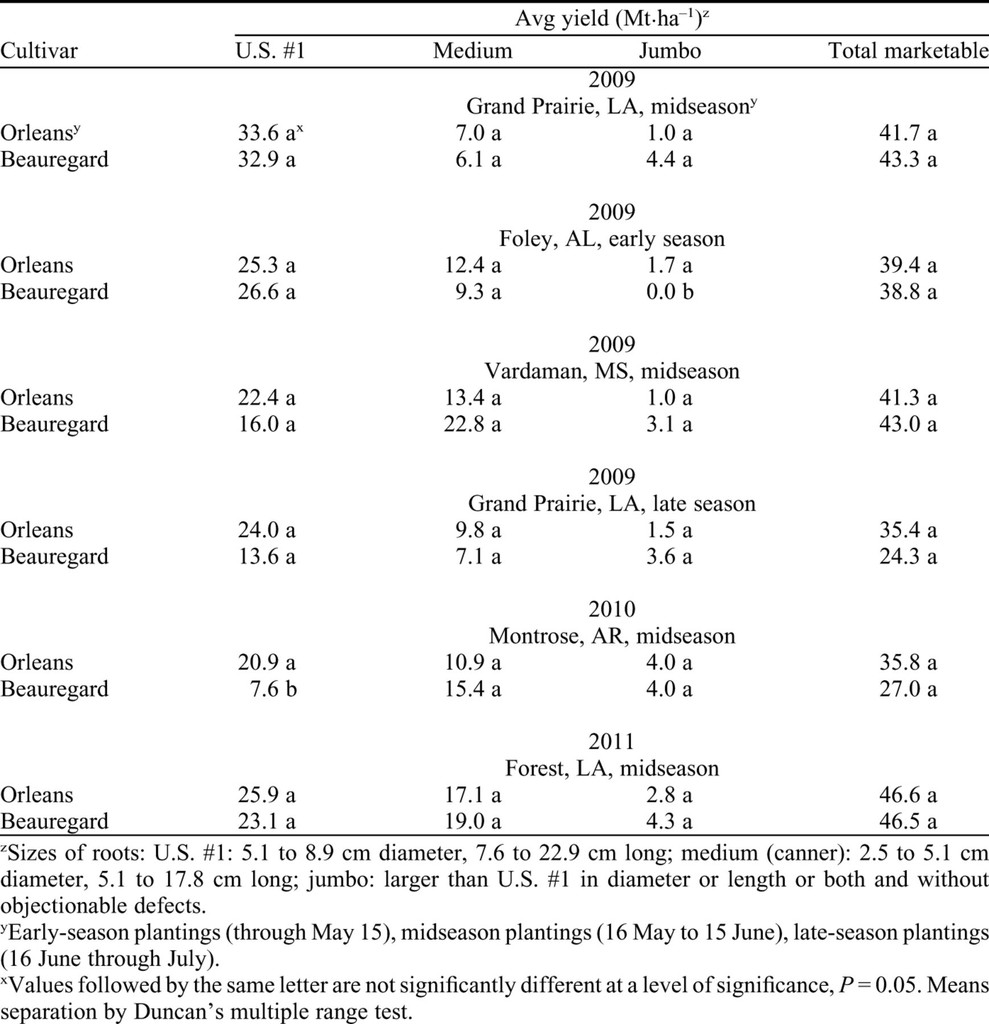 Limited quantities of foundation seed stock will be commercially available for the 2013 crop season. Requests for roots should be made to the Sweet Potato Research Station, P.O. Box 120, Chase, LA 71324. Intellectual property protection will be sought.