Search for other papers by James Shrefler in
Google ScholarClose

Extending the season can provide opportunities for vegetable producers. Bunching onion, or scallions (Allium fistulosum L.), is a crop that can be a candidate for protected production used to extend the growing season. The cvs. Evergreen Hardy White (white), Deep Purple (red), and Nabechan F1 (white) were sown at monthly intervals from Sept. 2010 to Aug. 2011 in containers under greenhouse and hoop house conditions at Lane, OK. Days to harvest and yield variables were determined. Crop failure occurred in a greenhouse for all plants sown in July, for ‘Deep Purple’ sown in August, and for those sown in a hoop house in February and March and May through August, days to harvest was generally less for plants sown in the greenhouse, and for ‘Deep Purple’, but all plants took longer to reach marketable size than is indicated for field production. Yields for plants grown in the greenhouse were higher than for those grown in the hoop house. Greenhouse production provides more flexibility and protection from environmental conditions so that bunching onions can be grown for extended season production. However, environmental controls under greenhouse conditions need to be refined to reduce length of growing season while maintaining, or improving, yields of optimally sized plants. Programs to improve nutrition in school systems and introduction of “Farm to School” and “extended season” initiatives present opportunities for production of some vegetables including bunching onion, or scallions. “Farm to School” programs allow the use of fresh, locally grown foods to be incorporated into school menus. Bunching onions can be used fresh or prepared items. Use of protected culture in greenhouses and hoop houses may allow for extended season production of these onions so that they can be used during non-typical growing periods especially, when locally produced field-grown crops are not available.

There is information on production of bunching onions under field conditions (Anonymous, 2002; Boyhan et al., 2009; Hodges, 2004). Expected yields from field production are ≈10,000 to 12,300 kg·ha−1 (Anonymous, 2002) equating to ≈1 to 1.23 kg·m−2. There is little scientifically evaluated information on bunching onion production under protected culture. In an environmental chamber, Broome and Peffley (2005) found that in-row distances of 15 to 20 mm benefitted plant development.

Shrefler et al. (2011) used hoop houses to produce spring transplants of bulb onions (A. cepa L. Cepa group). Although not completely analogous, it was determined that onions could be grown to bunching onion size over winter in Oklahoma using this type of protected culture. The transplants were started on a single date. It is not clear how planting date would affect production of bunching onions’ marketable yields. Russo (2004) reported on a method using seedling trays in a greenhouse to produce bulb onion transplants to be established in spring. These were also started on a single date and the products of neither of these methods were intended for consumption of immature plants. It is also unclear if type of protected culture would be cultivar-dependent. This experiment was undertaken to determine if marketable production of bunching onion cultivars was affected by planting date and type of protected culture.

Untreated seed of bunching onion cvs. Nabechan F1 (white), Evergreen Hardy White (white), and Deep Purple (red) (Johnny’s Selected Seed, Winslow, MA) were used. Under field conditions, seed can be sown in spring or late summer with harvestable size obtained from 60 to 65 d after sowing. This limits availability for other times of the year.

For this study a climate-controlled, glass-paned greenhouse and a minimally climate-controlled hoop house were used. The greenhouse climate was controlled by an automatic system, which regulated air temperatures using circulated hot water in the cooler months and swamp coolers and automated ventilation in the hot months. The hoop house was covered with polyethylene plastic (6 mil, single layer, ultraviolet-treated) purchased locally from Leon’s Greenhouses, Kingston, OK, and had no other heating or cooling. In the greenhouse, heating or cooling set points during the day and night were triggered at ≈24 °C. No other modification was made to the greenhouse growing environment for the duration of the experiment. In the hoop house, plastic sides were raised and end doors opened in an attempt to alleviate effects of high temperatures. Sides were lowered and doors closed during the cooler months.

Beginning 1 week after sowing, plants were fertilized weekly with 500 mL per container of a 16 mL·L−1 solution of Neptune’s Harvest, 2N–3P–1K (Ocean Crest Seafoods, Gloucester, MA; OMRI listed; Russo, 2006) with subsequent fertilizations using the same rate and volume at two-week intervals. Containers with seed, and later emerged plants, were irrigated with a misting system in both structures. Irrigation was timer-controlled and events occurred at 9:00 am, 3:00 pm, and 6:00 pm daily with 3-min durations. Plants were exposed only to ambient daylight. Plants were maintained until pseudostems began to swell and/or tops began to degrade. There were no synthetic pesticides used; insect populations did not warrant control. Data were collected on days until harvest and marketable and cull number of plants produced; fresh weights of marketable and cull plants; weights of leaf tissue above a 20-cm height, which would be removed to produce marketable size plants; and dry weight of marketable plants, which was determined based on USDA, AMS (U.S. Department of Agriculture, Agricultural Marketing Service, 1947) grades.

The experiment was arranged in a split-split plot with type of culture method (greenhouse vs. hoop house) being the main effect, monthly planting date (12) the first split, and cultivar (three) the second split arranged randomly within planting date. Each type of culture, planting date, and cultivar treatment was replicated three times. Data were subjected to analysis of variance (ANOVA) in PROC GLM in SAS (Version 9.1; SAS, Inc., Cary, NC). If interactions were significant, they were used to explain the data. If interactions were not significant, the Ryan-Gabriel-Einot-Welsch post hoc test was used to separate means.

Days to harvest for bunching onion cvs. sown at various planting dates and cultured in a greenhouse or hoop house. 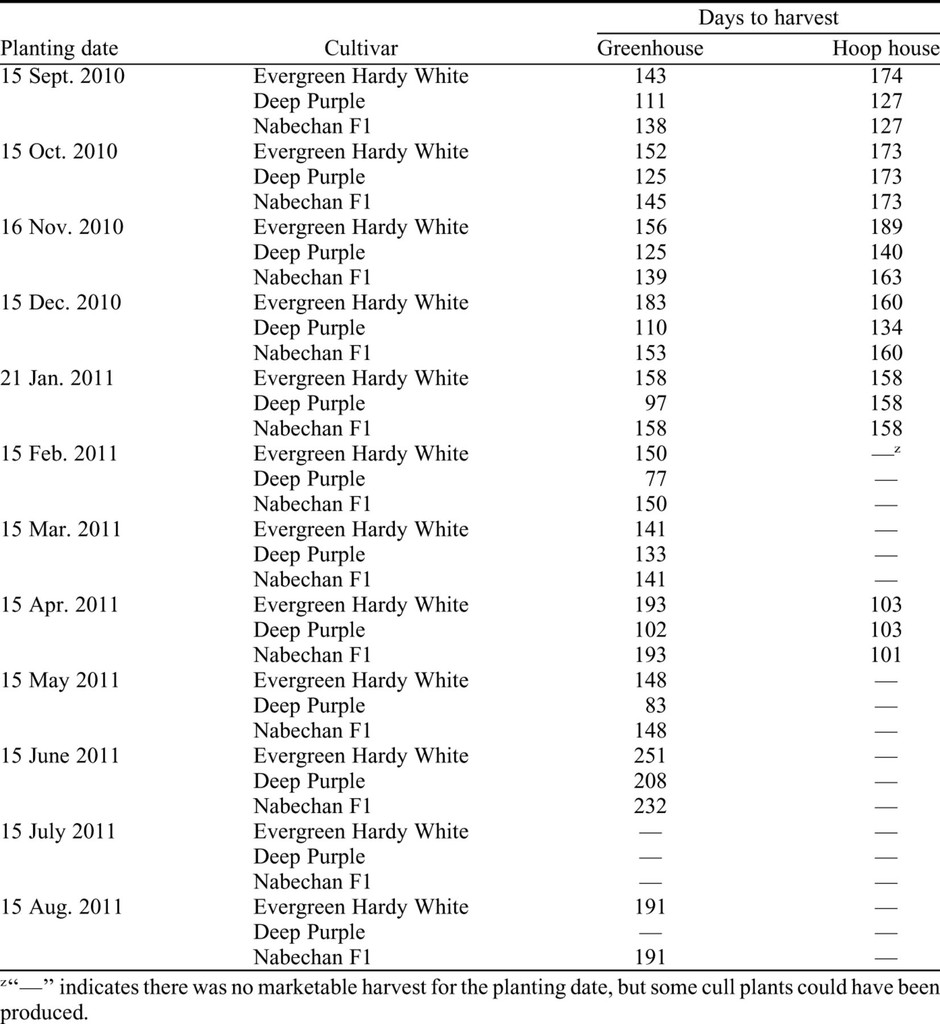 Analysis of variance results for effects of protected culture method, cultivar, and planting date on yield characteristics of bunching onions. 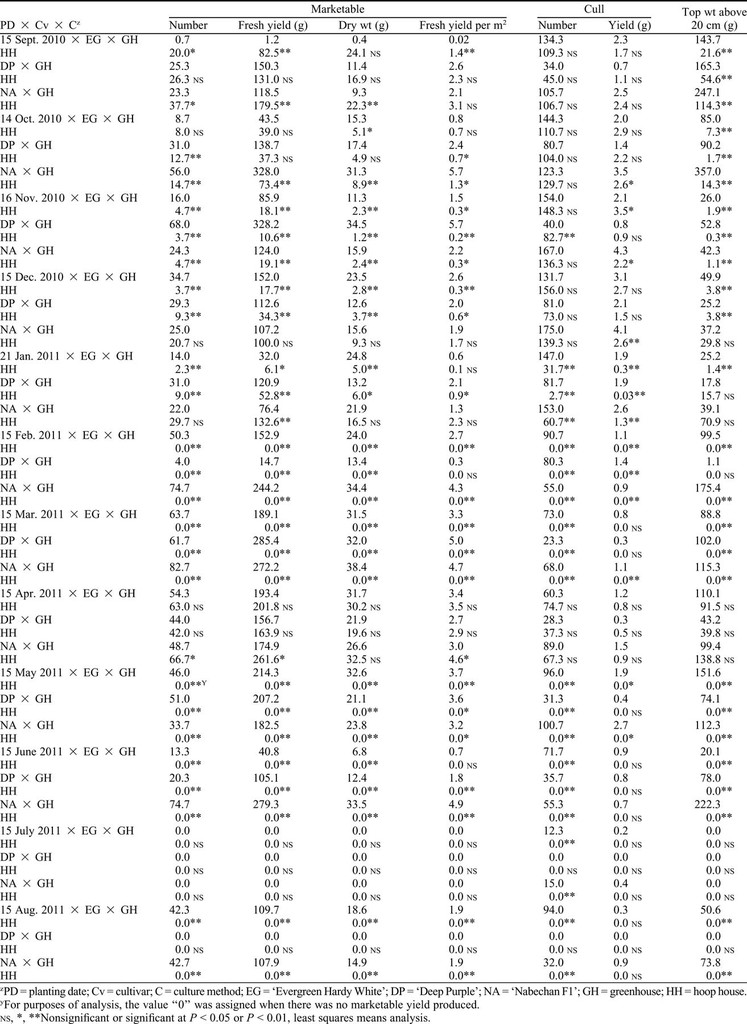 There was either no difference in top weight above 20 cm values for plants regardless of culture method or values were lower in the hoop house than for plants in the greenhouse.

The greenhouse and hoop house production environments are by definition different and each has limitations and benefits. That yield could be affected by environmental conditions was exemplified by the physical damage done to the hoop house and yield by high winds and high air temperatures. High and low temperatures in the summer months, in which part of the experiment was conducted, exceeded records for the region and in the hoop house, where plants were able to develop; marketable yields were reduced or not realized. With sides raised during hotter months, there is little difference in air temperature in and outside of the hoop house. With sides lowered in the cooler months, the hoop house retains some of the heat acquired during the day and primarily protects against frost. Without additional heating, protection from subfreezing temperature is minimal. Use of other inputs to include, but not be limited to, shading and heating may improve the yield of bunching onion using hoop house culture.

The greenhouse environment, which was not modified throughout the experiment, did not provide complete protection from environmental conditions affecting plant development. The greenhouse cooling was not able to reduce air temperatures below 37 °C during the hottest part of the day during the hottest months. Set point nighttime temperatures were able to be maintained. Except for the 15 July 2011 planting date, some marketable yield was realized. The other planting dates generally produced at levels that were as good as, or better than, the 1 to 1.23 kg·ha−1 realized for field production (Anonymous, 2002). Cultivar appears to affect yield and for most planting dates, one or more of the cultivars produced at levels in the greenhouse above those of field-grown crops and the growing season was extended to provide bunching onions in most months. The efficacy of the hoop house to extend the growing season appears to be less; the result of the minimal control over climate.

Time until most marketable size plants were produced far exceeded the 60 to 65 d listed by the supplier that would occur under field conditions. Longer production times have to be weighed against the cost of realizing the possible yield. Greenhouse production exposes plants to as much light as possible and plant physiological responses, sometimes detrimental, respond to amount and type of light (Madrid et al., 1999; Montané et al., 1999). The type of glass allows for various degrees of light filtering. The 2-fold, or more, increase in production time may reflect the unmodified growing conditions in the greenhouse.

Options for maximizing yield of bunching onions under greenhouse conditions will likely be related to understanding the appropriate production system that could involve: amount of fertilizer, amount and timing of irrigation, and climate control to include heating/cooling regimes, duration of supplemental light, and use of shadecloth. When shade was used under tropical conditions in the field, bunching onion yield increased, or was unaffected, depending on time of year (Wolff and Coltman, 1990). In a protected environment, effects of shade might have an identifiable impact because other variables could be better controlled. Various types, and thicknesses, of plastic exist for covering hoop houses with different filtering capacity. This can also affect plant development and vary time to marketable harvest. Cultural methods used for production in protected environments need to be examined so that plants produce appropriate top growth and bulb sizes. Although leaf tissue contributes to plant development through photosynthesis, tissue produced above the 20 cm height might be considered economically unimportant biomass. If leaf height could be controlled, time to harvest of appropriate-sized plants might be affected. Plants grown under hoop house conditions generally were shorter than for greenhouse-grown plants but this did not appear to benefit yield when compared with greenhouse-grown plants. Also, the volume of unmarketable plants may be a concern because the biomass will have to be disposed of.

A possible benefit to growing this crop is its use in “Farm to School” and extended season programs. Hoop house culture is more susceptible to environmental conditions with weather extremes having detrimental effects to the extent of crop failure, which occurred for half of the planting dates. It appears that the greenhouse environment is better suited for this practice because some yield would be realized during summer months when schools have extended sessions or if a year-long school session is instituted. Greenhouses provide more flexibility in controlling the growing environment but costs will be higher. Although the ability to control the environment is available, extremes in summer and winter months can affect temperature control efficiency in the greenhouse; in one instance crop failure occurred. Because chances of producing a crop are higher, use of a greenhouse for extended season production of bunching onions appears to be warranted and may be improved with modification of the growing environment.

Maximum and minimum temperatures over the growing period. Arrows indicate sowing dates in the greenhouse and hoop house. 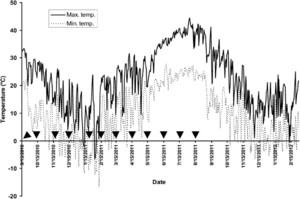 Search for other papers by James Shrefler in
Google ScholarClose