Leaf firing (%) responses to biosolids application in tall fescue grown under moisture stress. Treatments with the same letters within each sampling date are not significantly different at P ≤ 0.05.

Leaf malondialdehyde (MDA) content responses to biosolids application in tall fescue grown under drought stress. Tall fescue was seeded on 8 Oct. 2010; biosolids were applied 1 d before planting. Irrigation was withheld from 1 d to 28 d and then resumed from 28 d to 35 d. Treatments with same letters are not significantly different at P ≤ 0.05. 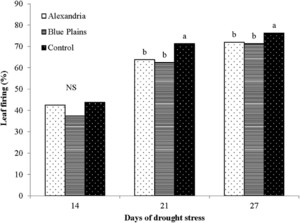 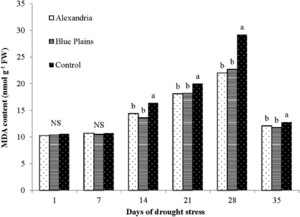