Buddleja davidii Franch., commonly called butterfly bush, is a large woody subshrub with long, colorful, fragrant floral panicles, which attract hummingbirds and butterflies. It was originally introduced to the United States from China and is a winter-hardy perennial throughout most of the United States to USDA hardiness zone 5 (–26 to –29 °C). It is an important and favored landscape ornamental with over 100 named cultivars (Dirr, 2009; Stuart, 2006). Variegated forms of plants are popular because the foliage provides ornamental color interest when plants are not in flower. Some variegated butterfly bush cultivars have been introduced, including ‘Harlequin’, ‘Notbud’ Masquerade™, ‘Santana’, and ‘White Harlequin’, but they have often performed poorly as a result of chimera instability, leaf scorch or leaf “greening” in summer heat, poor vigor, or spider mite susceptibility.

A new variegated cultivar of Buddleja davidii named ‘Summer Skies’ was generated through the use of chemical mutagenesis. The leaves of this cultivar have a striking periclinal variegation, which is highly stable. The central portion of the leaves are dark green with a broad and variable edge of bright yellow to white depending on the amount of sunlight the plant receives. ‘Summer Skies’ performed well in trials in comparison with several commonly available cultivars, exhibiting strong vigor and attractive variegation throughout the growing season. ‘Summer Skies’ has been released to provide a cultivar with improved variegation and landscape performance that can extend the ornamental appeal of butterfly bush to the spring and early summer periods before the start of flowering.

‘Summer Skies’ resulted from seed that was mutagenized using the chemical mutagen ethyl methanesulfonate (EMS). Seed of B. davidii Assorted Colors, a readily available seed mix collected from plants with various flower colors, was used for mutagenesis. Five hundred viable seeds were treated with EMS at 200 mm following modified methods of Leyser and Furner (2011). B. davidii is a tetraploid and therefore more resistant to lethal mutation. It was reasoned that a higher concentration of EMS (200 mm) than that proposed by Leyser and Furner for arabidopsis (100 mm) would be more suitable for this species. The seed was first imbibed for 12 h at 4 °C in 2 mL 0.1% KCl. The KCl solution was removed and the seeds were resuspended in 2.5 mL of 100 mm Na2HPO4, pH 5, containing 200 mm EMS. The seeds were incubated in the EMS solution for 4 h at room temperature with occasional mixing by repeated inversion. The EMS solution was removed and the seeds were then neutralized with 5 mL of 100 mm sodium thiosulfate for 15 min at room temperature with occasional mixing by inversion. A second sodium thiosulfate wash was used followed by two washes with deionized water to completely remove any residual salts. The seeds were then mixed with fine dry sand and scattered evenly across flats of pre-moistened ProMix (Premier Tech Horticulture, Quebec, Canada) for germination. Flats were covered with clear lids and seeds were germinated at 23 ± 2 °C under cool white fluorescent lights providing 100 μmole·m−2·s−1 with an 18-h photoperiod. No decrease in seed germination was noted for EMS-treated seed in comparison with untreated seed.

Six weeks post-treatment, all seedlings were transferred individually to 72-cell plug trays containing ProMix medium. Seedlings were grown on under greenhouse conditions with supplemental high intensity discharge lighting to provide a 16-h photoperiod until they were transferred to an outdoor container-growing area the first week of June. Soluble 20N–10P–20K fertilizer (100 mg·L−1 nitrogen) was supplied weekly throughout the growing period. During outdoor culture, a single seedling was identified that showed distinctive periclinal variegation where leaves had dark green centers that transitioned to broad cream-colored borders. This plant was evaluated further and the variegation pattern remained consistent, so cuttings were taken to multiply the plant. All cutting propagated plants appeared identical to each other and to the parent plant with no significant loss or change in the variegation pattern. Propagated plants were overwintered and then distributed for testing at various U.S. locations including Storrs, CT. ‘Summer Skies’ was released by the University of Connecticut (UCONN) in 2010.

‘Summer Skies’ is a multi-stemmed subshrub with an upright spreading habit and a globose form (Fig. 1). Plants grow to 1.5 m in height and 1.5 m in width in a growing season after they are cut back to 20 cm tall at the start of the spring. Mature leaves (nodes three to six from the shoot apex) are lanceolate, averaging 12 cm long and 4 cm wide. Leaf tips are acuminate, leaf bases are acute, and leaf margins are serrate. The leaves are distinctly variegated with ≈60% to 80% of the central portion of the leaf a mid-dark green [Royal Horticultural Society (RHS) 137A] with minor sectoring of a paler green (RHS 147B) at the interface of the green and cream-colored leaf portions (Fig. 2). Color was assessed by observation using the RHS Color Charts (Royal Horticultural Society and Flower Council of Holland, 1986). The leaf margin is bright yellow (RHS 7A) for foliage developed under greenhouse conditions or lower light conditions and is cream-colored (RHS 158B) for foliage developed under full sun exposure. Leaves are deciduous.

Winterhardiness was evaluated in Storrs, CT (USDA hardiness zone 5a) over the 2008–2009 winter and the 2009–2010 winter. The 2009–2010 winter was the harshest of the two with a minimum temperature of –15 °C and 13 d with minimums at or below –12 °C. Plants overwintered successfully but were killed to within 15 to 30 cm of the ground. All other commercial cultivars also exhibited similar cold injury and dieback to that observed on ‘Summer Skies’. After each overwintering dormancy period, new spring growth developed rapidly from below the cold-injured tissue and maintained its variegation pattern.

The variegation pattern on ‘Summer Skies’ is highly stable and of the hundreds of individuals that have been propagated and grown, chimeric segregation has been observed very rarely. If chimera segregation does occur, white shoots are produced, but they lack vigor and fail to develop. All green shoots have never been observed. Marginal scorching of the white portions of the leaves, a common problem with many variegated plants, was not observed on ‘Summer Skies’ although plants were in full sun exposure and experienced several days of temperatures above 32 °C. Variegation on ‘Summer Skies’ appeared to be resistant to “greening up” in the warmest part of the summer, a trait that was observed on the variegated cultivar Santana.

Like most other Buddleja davidii cultivars, ‘Summer Skies’ will perform best in full sun exposure in a well-drained soil. ‘Summer Skies’ could be used in all landscape situations where butterfly bush is typical used. For green-leaved Buddleja davidii cultivars, flowers provide color and landscape interest during mid- and late summer, but at other times of the year, they lack ornamental interest. The variegated foliage of ‘Summer Skies’, in addition to its flowers, provides color interest in the landscape for an extended period of time from mid-spring through late summer. Similar to other butterfly bush cultivars, ‘Summer Skies’ attracts large numbers of butterflies.

Propagation of ‘Summer Skies’ from softwood cuttings taken during the spring or summer can be achieved quickly and with a high rate of success. Cuttings treated with 1000 ppm K-IBA and placed under intermittent mist typically root in less than 2 weeks. Rooted cuttings can be potted and will continue growth without interruption.

A U.S. plant patent has been submitted and approved for ‘Summer Skies’ (number not currently assigned) and plant patent rights assigned to UCONN. Plants and propagation rights can be obtained from Spring Meadow Nursery, Grand Haven, MI. 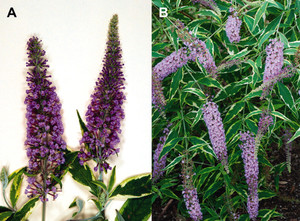