‘UF 85-5’: A Spotted Caladium Cultivar for Use in Containers and Sunny Landscapes

Caladiums (Caladium ×hortulanum Birdsey, Araceae Juss.) are tropical ornamental aroids. They are often forced as potted plants and grown in the landscape to provide color (Evans et al., 1992). A great majority of caladium plants in the floriculture trade are propagated from tubers. More than 95% of the caladium tubers used in the world comes from central Florida (Bell et al., 1998; Deng et al., 2008). Many existing commercial caladium cultivars show attractive coloration patterns but have poor pot or landscape performance and/or poor tuber yield. ‘Marie Moir’ is an example of this type of cultivar (Wilfret and Hurner, 1982). Its leaves are very attractive in coloration (white face with dark green veins and numerous red spots) but are few in number, resulting in poor pot or landscape plants unsatisfactory for commercial or homeowner acceptance. Additionally, its field production of tubers has been unstable over the years (Terri Bates, personal communication), thus tuber growers cannot profitably grow the cultivar.

‘UF 85-5’ was derived from a cross made in 2000 between ‘Summer Rose’ and ‘Florida Fantasy’ (Fig. 3) and selected out of a population of progeny in 2001. ‘Summer Rose’ was released in 2005 (Deng and Harbaugh, 2006). It was progeny of ‘Aaron’ and a breeding line UF-FCT that resulted from a cross between ‘Fire Chief’ and ‘Torchy’. ‘Florida Fantasy’ was selected from progeny of a cross between ‘Candidum Junior’ and ‘Red Frill’ and released in 1990 (Wilfret, 1991). It has been in commercial production in Florida since then. The ancestry of ‘Aaron’, ‘Candidum Junior’, ‘Fire Chief’, ‘Red Frill’, and ‘Torchy’ is unknown.

Leaves are peltate, sagitate–cordate, and have palmate–pinnate venation. The upper leaf surface has a green (RHS 137C) margin bordering the entire leaf, several green (RHS 137A) main veins, and numerous secondary green (RHS 137A) veins, which are netted over the whole leaf blade. Interveinal areas are mostly green–white (RHS 157D). Red (RHS 46A) spots occur between main veins in the range of 10 to 30 per fully developed leaf. The undersurface has a yellow–green (RHS 145D) undertone with heavily netted veins of grayed green (RHS 191A). Primary veins are grayed green (RHS 193D) at the basal notch and darkened to grayed green (RHS 193A) near the tip of the leaf. Spots are grayed purple (RHS 184C) and vary in size. Petioles are 3 to 5 mm near the apex and 5 to 10 mm near the base (in diameter). The prominent petiole color is yellow–green (RHS 144C to 145D) with streaks of grayed brown to brown (RHS 199C to 200B). Jumbo-sized (6.4 to 8.9 cm in diameter) tubers have multiple segments and bear four to six dominant buds. The tuber surface is brown (RHS 200B to 200D) and the cortical area is yellow (RHS 13B).

In both 2005 and 2006, field plots were organized in three randomized complete blocks, and each plot was 1.2 m2 with 30 plants. Three commercial cultivars, Candidum, Marie Moir, and Miss Muffet, were included in the experiment for performance comparison. ‘Candidum’ was the No. 1 or No. 2 best-selling caladium cultivar (Bell et al., 1998; Deng et al., 2008) and shares a similar coloration pattern to ‘UF 85-5’ except for not having colored spots on leaf blades. As mentioned, ‘Marie Moir’ is the closest to ‘UF 85-5’ in leaf coloration among commercial cultivars. ‘Miss Muffet’ was included because it was a popular spotted cultivar. An analysis of variance was conducted using the GLM procedure in the SAS program (SAS Institute, 2009) to compare the performance of ‘UF 85-5’ with that of these commercial cultivars.

Plants of ‘UF 85-5’ and ‘Cranberry Star’ were 9 to 13 cm taller and developed significantly more (≈100%) leaves than ‘Candidum’ and ‘Marie Moir’ (Table 2). Leaf sizes were similar among all cultivars tested, except for ‘Miss Muffet’, a known dwarf cultivar, which was approximately half the size of other cultivars. Plants of ‘UF 85-5’ performed well in the landscape with performance ratings between 3.6 and 4.8, similar to ‘Cranberry Star’, but significantly higher than those of ‘Candidum’ (1.7 to 3.1), ‘Marie Moir’ (1.4 to 3.3), and ‘Miss Muffet’ (1.5 to 2.4). ‘UF 85-5’ received the highest sunburn tolerance ratings in all the evaluations in each growing season, indicating better or significantly better sun tolerance in this cultivar in comparison with the commercial cultivars and potential for use in sunny locations in the landscape (Fig. 1). Although ‘UF 85-5’ showed a high level of similarity to ‘Cranberry Star’, a recent release, in plant height, leaf number, and leaf size, ‘Cranberry Star’ was very susceptible to leaf damage in full sun and thus limited to use in shady locations (Table 2).

The suitability of ‘UF 85-5’ for container forcing was evaluated by forcing tubers in 11.4-cm containers. No. 1 tubers of ‘UF 85-5’, ‘Cranberry Star’, ‘Marie Moir’, and ‘Miss Muffet’ were planted either intact or de-eyed in a peat/vermiculite mix (VerGro Container Mix A; Verlite, Tampa, FL) on 26 Mar. 2007. The study was conducted in a greenhouse with 45% light exclusion. Temperatures in the greenhouse ranged from 16 to 32 °C during the experiment. Potted plants were arranged on metal benches in the greenhouse in 10 randomized complete blocks. Plant height, number of leaves, and foliar characteristics were recorded 8 weeks after planting.

‘UF 85-5’ sprouted 4 to 9 d earlier, produced higher quality pot plants, and performed better in the landscape than ‘Marie Moir’ and showed better sunburn tolerance than ‘Cranberry Star’. Additionally, ‘UF 85-5’ has shown improved tuber yield potential. In tuber forcing, ‘UF 85-5’ behaved like ‘Miss Muffet’ with a similar number of days to sprout, a similar number of leaves, more or less similar sizes of leaves, and similar plant quality, except that ‘UF 85-5’ is taller. Tuber de-eyeing seemed to be optional for pot plant production, but this practice improved the quality of pot plants. ‘UF 85-5’ showed excellent sun tolerance and produced a large number of leaves in sunny locations; thus, it is suitable for a wide range of locations in the landscape.

Plant of ‘UF 85-5’ forced in a small square container (11.4 cm wide at mouth) from one de-eyed No. 1 tuber (2.54 cm in diameter). The plant was grown in the greenhouse with 35% light exclusion. Photograph was taken 9 weeks after the tuber was planted. 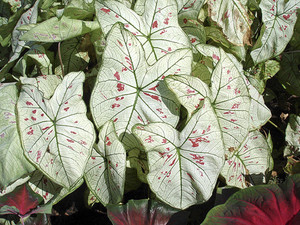 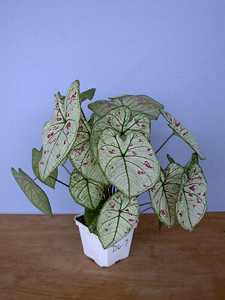