Effect of Genotype, Planting Date, and Spacing on Zoysiagrass Establishment from Vegetative Plugs

Zoysiagrass (Zoysia spp.) is a warm-season, perennial turfgrass native to parts of China, Japan, and Korea (Engelke and Anderson, 2003). It is adapted throughout the southern region of the United States to the northern transition zone. Zoysiagrass forms a dense, uniform turf through the production and spread of rhizomes and stolons (Turgeon, 2008). It is predominantly used on golf courses, athletic fields, home lawns, and commercial landscapes. Adaptation to a wide range of environmental conditions has further led to an increase in zoysiagrass popularity. Zoysiagrass tolerates reduced light intensity (Barrios et al., 1986; Morton et al., 1991; Qian and Engelke, 1999a), moderate salinity (Marcum et al., 1998; Qian et al., 2000), moderate drought conditions (Qian and Engelke, 1999b; White et al., 2001), and exposure to low temperatures (Patton and Reicher, 2007; Patton et al., 2007a, 2007b; Warmund et al., 1998). However, slow growth and establishment rate has become a major limitation to the increased use of zoysiagrass. Zoysiagrass establishment by plugs or sprigs can take up to 2 years, or longer, to reach complete coverage (Hume and Freyre, 1950; Sifers et al., 1992a, 1992b). Delayed establishment may increase plant desiccation (Richardson and Boyd, 2001), weed encroachment (Harivandi et al., 1995), and maintenance costs during establishment (Henry et al., 1988).

The measurement of accumulated GDD has been used to monitor growth and phonological stages in apricot (Prunus armeniaca L.) and peach (P. persica L.) (Valentini et al., 2004), sour cherry (P. cerasus L.) (Zavalloni et al., 2006), annual bluegrass (Poa annua L.) (Danneberger and Vargas, 1984) as well as many warm-season grasses (Madakadze et al., 1998). Modeling the relationship of plant growth to temperature may be achieved by calculating GDD. The model is applied by subtracting a base temperature from the daily mean air temperature to obtain a GDD value for each day. Daily GDD values are summed to obtain the relative number of GDD that have accumulated over a given time period. Previous research determined the use of a 5 °C base temperature for calculating the accumulation of GDD for Zoysia spp. (Patton et al., 2004; Unruh et al., 1996). The use of accumulated GDD may increase the understanding of the relationship between zoysiagrass growth and planting date.

Experiments were conducted in 2007 and 2008 at the Texas Tech Turfgrass Research Station in Lubbock, TX, on a Brownfield sandy clay loam (loamy, mixed, superactive, thermic Arenic Aridic Paleustalfs) with a pH of 8.2. Plugs measuring 10 cm in diameter of six zoysiagrass genotypes [Z. japonica genotype (‘Meyer’); Z. matrella genotypes (‘Shadow Turf’, ‘Diamond’, ‘DALZ 0501’, and ‘Zorro’); Z. japonica × Z. pacifica genotype (‘Emerald’)] were vegetatively propagated in the greenhouse by planting three stolons with three nodes each in potting medium containing 55% bark, 20% Canadian sphagnum peatmoss, 10% perlite, 15% vermiculite, dolomitic lime, gypsum, and a wetting agent (Sun Gro Horticulture, Vancouver, British Columbia, Canada). Zoysiagrass genotypes were selected to represent a wide variety of growth rates and habits (‘DALZ 0501’, ‘Diamond’, ‘Zorro’, and ‘Emerald’ were provided by Dr. Milt Engelke; ‘Shadow Turf’ and ‘Meyer’ were provided by Mark Ivey). Plugs were irrigated frequently to encourage rooting of zoysiagrass stolons and then as needed to prevent wilting and encourage growth. Plugs were fertilized (21N–3.5P–14.9K) (The Scotts Company, Marysville, OH) every 2 weeks at a rate of 24.4 kg·ha−1 nitrogen (N) to encourage establishment. Plugs were grown in the greenhouse for ≈8 weeks until reaching 100% cover. The research area was cultivated in two directions with a tractor-mounted rototiller to a depth of 10.2 cm before plug transplant. Nine plugs (10 cm in diameter) of each genotype were transplanted 30.5 cm apart in 1 m × 1-m plots on 15 May 2007 and 5 May 2008. Plots were arranged in a randomized complete block design with four replications of genotypes. Fertilizer (16N–10.5P–9.9K) (The Andersons, Inc., Maumee, OH) was applied at the time of transplant at a rate of 24.4 kg·ha−1 N. Monthly applications of fertilizer (16N–10.5P–9.9K) (The Andersons, Inc.) were made throughout the duration of the study at a rate of 24.4 kg·ha−1 N. Plants were mowed twice weekly and maintained at a height of 1.9 cm with a walk-behind reel mower (Toro Greensmaster 1600; The Toro Company, Bloomington, MN). Irrigation was applied as a supplement to rainfall at a rate of 2.5 to 3.0 cm/week. Plots were maintained weed free by hand-weeding and through spot applications of glyphosate (0.28 kg·ha−1) with a handheld pump sprayer (Solo, Newport News, VA) to reduce the effects of weed competition.

Lateral plant diameters were recorded at the beginning of each study and every 2 weeks thereafter for a total of 4 months. Two diameter measurements were taken perpendicular to each other (the first measurement was taken in the largest diameter) and averaged to obtain the reported diameter of each plant at each sampling time. Maximum plug diameter (61 cm) was obtained when plugs grew to the center of an adjacent plug. Data from three plugs (lower left, middle center, and upper right) were averaged to give estimates for each plot.

Experiments were conducted in 2006 and 2007 at the Texas Tech Turfgrass Research Station in Lubbock, TX, on a Brownfield sandy clay loam (loamy, mixed, superactive, thermic Arenic Aridic Paleustalfs). Plugs measuring 2.5 cm in diameter of the Z. matrella genotype ‘Shadow Turf’ were vegetatively propagated in the greenhouse in potting medium containing 55% bark, 20% Canadian sphagnum peatmoss, 10% perlite, 15% vermiculite, dolomitic lime, gypsum, and a wetting agent (Sun Gro Horticulture). Plugs were propagated and maintained using the same techniques described in the previous trial. A 3 × 6 factorial arranged in a split-plot design with four replications was used to evaluate planting date (main plot) and plug spacing (subplot within planting date). The six plug spacings were 15.2, 22.9, 30.5, 38.1, 45.7, and 61.0 cm. Experimental plots were cultivated in two directions with a tractor-mounted rototiller to a depth of 10.2 cm before plug transplant. Plugs were transplanted into 1 m × 1-m plots on 26 May 2006 and 17 May 2007; 20 June 2006 and 14 June 2007; and 28 July 2006 and 13 July 2007. Fertilizer (16N–10.5P–9.9K) (The Andersons, Inc.) was applied at time of transplant at a rate of 24.4 kg·ha−1 N. Fertilizer (16N–10.5P–9.9K) (The Andersons, Inc.) applications were made every 2 weeks throughout the duration of the study at a rate of 24.4 kg·ha−1 N. Plants were mowed twice weekly and maintained at a height of 1.9 cm with a walk-behind reel mower (Toro Greensmaster 1600; The Toro Company). Irrigation was applied as a supplement to rainfall at a rate of 2.5 to 3.0 cm/week. Plots were maintained weed free by hand-weeding and through spot applications of glyphosate (0.28 kg·ha−1) with a handheld pump sprayer (Solo) to reduce the effects of weed competition.

GDD values were calculated by subtracting the base growth temperature of zoysiagrass (5 °C) from the daily mean air temperature. Daily GDDs were summed to obtain a GDD value for the 6 and 16 WAP time periods for each respective planting date. Mean air temperature was based on weather data collected from a weather station located at the Texas Tech Turfgrass Research Station. The weather station was located in an irrigated tall fescue (Festuca arundinacea Schreb.) research field maintained at a height of 7.6 cm.

Data were subjected to ANOVA using error partitioning appropriate to a split-plot analysis in the general linear models procedure (PROC GLM) provided by SAS. Data were pooled across years to test for significant year interactions. The arcsine square root transformations of percent zoysiagrass cover data were also subjected to ANOVA but were not different from non-transformed data; therefore, non-transformed data are presented. Means were separated using Fisher's protected lsd test at the 0.05 P level.

Analysis of variance revealed an insignificant genotype-by-year interaction (P = 0.4896); therefore, data for 2007 and 2008 were pooled and are presented together. A significant genotype effect (P < 0.0001) was observed for all data.

Zoysiagrass establishment was slow (36% cover or less) regardless of genotype at 6 WAP. Meyer exhibited the largest plug diameter 6 WAP (22 cm) (Table 1). Plug diameters of the remaining zoysiagrass genotypes ranged from 13 to 19 cm 6 WAP with ‘Diamond’ (13 cm) exhibiting the least amount of growth. 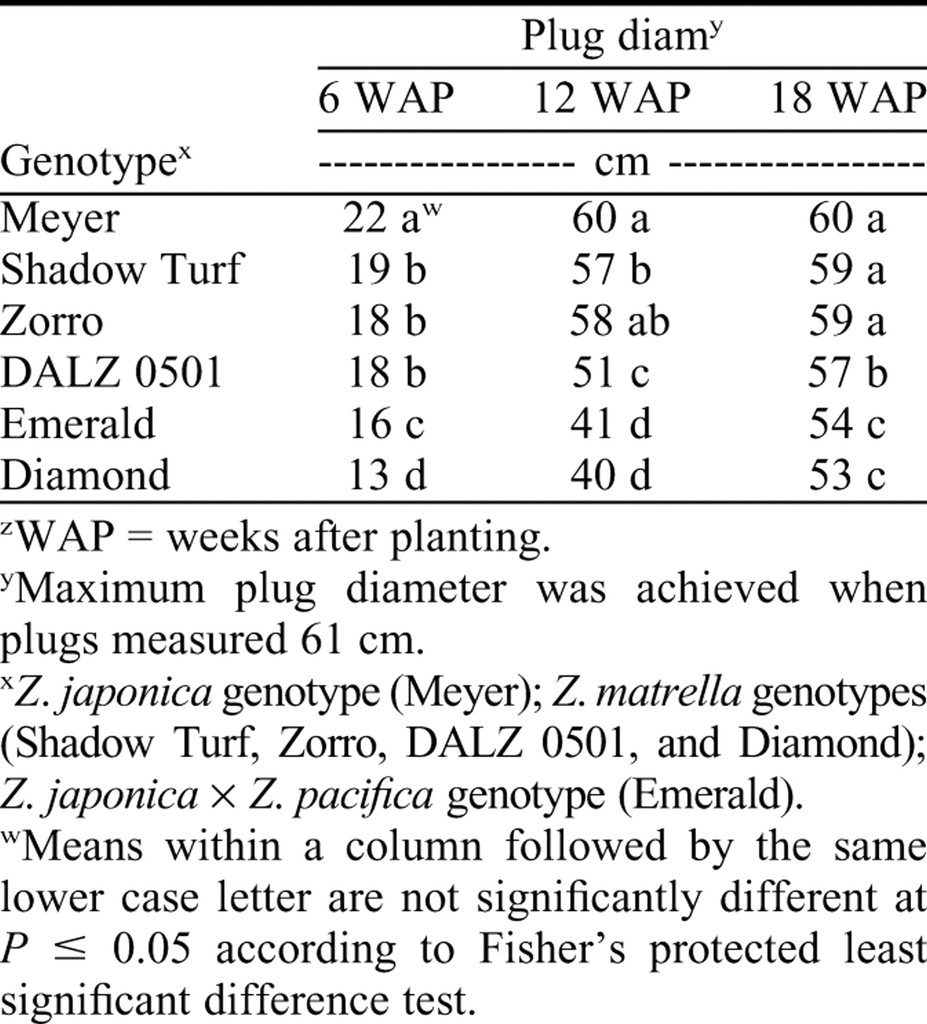 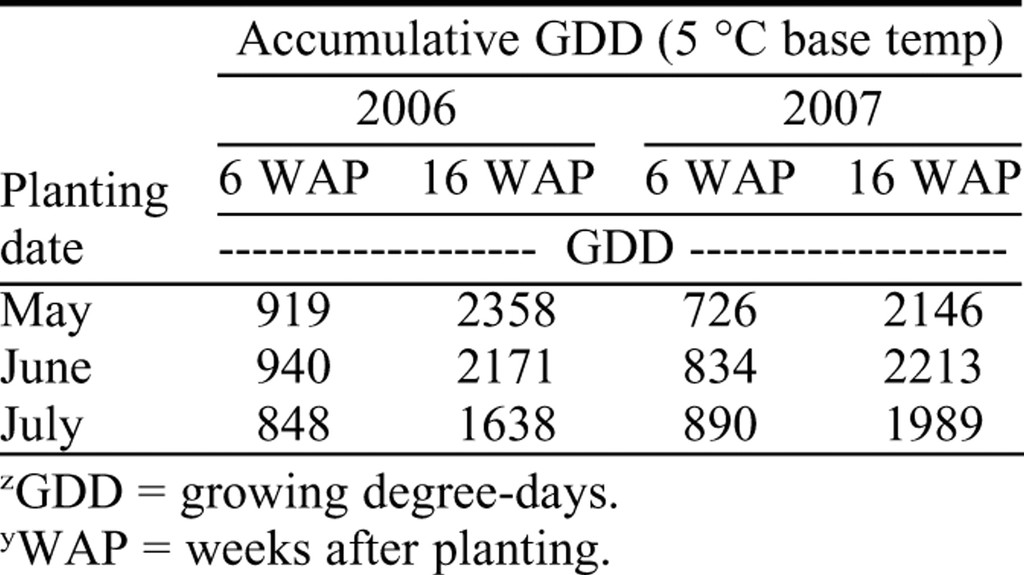 Planting ‘Shadow Turf’ zoysiagrass plugs in May resulted in the highest percent cover at the end of the season in both years. However, initial establishment of plugs planted in May was slower than plugs planted in June or July. Patton et al. (2004) observed the greatest turfgrass cover (91% to 100%) of ‘Zenith’ zoysiagrass when it was seeded 1 June 2000 and 2001. Turfgrass coverage of ‘Zenith’ zoysiagrass seeded on 15 July and 1 Aug. ranged from 33% to 64% and 14% to 47%, respectively (Patton et al., 2004). Similar results were reported for buffalograss with decreases in percent turfgrass cover resulting from late summer planting dates (Frank, 1996). Gatian-Gaitan et al. (1998) also observed decreases in percent buffalograss [Buchloe dactyloides (Nutt.) Engelm.] cover when it was planted after 15 July.

The highest percent cover in the minimal amount of time was observed for ‘Shadow Turf’ zoysiagrass plugs planted at closer spacings. Plugs spaced on 15.2-cm centers resulted in the greatest initial and season-ending zoysiagrass cover regardless of planting date. Establishing zoysiagrass from plugs at this spacing is not always the most cost-efficient method as a result of increased inputs per unit area. Results indicate that wider plug spacings (22.9 to 38.1 cm) may still produce adequate turfgrass cover (greater than 85%) if planted at an earlier planting date. ‘Shadow Turf’ zoysiagrass plugs planted 38.1 to 61.0 cm apart did not reach adequate coverage regardless of planting date and year, except when planted on 26 May 2006. Planting plugs at these spacings may not ensure adequate zoysiagrass coverage at the end of one growing season.

Results from this study suggest that selecting zoysiagrass genotypes with quicker establishment rates may reduce the amount of time required for adequate (85% or greater) turfgrass cover. Late spring or early summer planting dates may provide the greatest zoysiagrass cover when established from plugs. Planting later in the summer may still be possible, but zoysiagrass plugs require closer spacing to reach adequate turfgrass coverage by the end of the first growing season. Using early planting date and 15.2 to 30.5-cm plug spacings may result in the quickest turfgrass cover when establishing zoysiagrass from plugs. Selecting zoysiagrass genotypes with faster short-term (6 to 12 weeks) establishment may be plausible; however, long-term (18 weeks or greater) establishment and cover were not dependent on genotype based on the methods and observations of this research.