Watermelon [Citrullus lanatus (Thunb.) Matsum. and Nakai] seedlings are the main product of the seedling companies in China. With the increases in the cultivation area of watermelon (2.2 million ha in China and 3.8 million ha in the world; FAOSTAT, 2009) and the demand for watermelon seedlings (≈33 billion per year in China), seedling storage is essential for meeting market demands. The most common method of preserving seedlings for a short-term period is low-temperature storage in darkness (Kaczperski and Armitage, 1992). Although low-temperature storage preserves seedling vigor and inhibits overgrowth, it reduces seedling quality to some extent. The interruption of photosynthesis and the low-temperature stress were regarded to be the important factors that affect the physiological changes of the seedlings during storage (Ning et al., 2006a).

Grafting is universally used for watermelon production to resist root diseases (Beltrán et al., 2008) and to increase the tolerance to salinity (Goreta et al., 2008) and low-temperature stress (Liu et al., 2003). Justus and Kubota (2010) reported that grafted muskmelon (Cucumis melon L.) seedlings had better storability under low-temperature storage with 12 μmol·m−2·s−1 photosynthetic photon flux density and suggested that the probable reason was the result of their higher chilling tolerance compared with the non-grafted ones. Thus, we expected that higher tolerance of grafted watermelon seedlings against low temperature could contribute to their storability. In this study, we compared the physiological responses of grafted and non-grafted watermelon seedlings during low-temperature storage under darkness and their photosynthetic recovery after transplanting to investigate whether grafted watermelon seedlings are superior to non-grafted ones in storability.

Watermelon [C. lanatus ‘Zaojia 84-24’] seeds and pumpkin (Cucurbita moschata Duch. ‘Zhuangshi’) rootstock seeds were provided by a seedling company (Shanghai Yuanyi Seedling Co., Ltd., Shanghai, China) and sown in 72-cell plastic plug trays (50 cm3 per cell). For subsequent grafting, rootstock seeds were sown 5 d before scion seeds. The composition of substrate was 40% peat, 40% vermiculite, and 20% perlite. When scion seedlings had two expanded cotyledons and the rootstock seedlings grew one small true leaf, grafting was performed with the hole-insertion method described by Hassell et al. (2008). After grafting, grafted seedlings were maintained in a healing chamber at 27 ± 2 °C temperature, 95% ± 5% relative humidity, and 50 μmol·m−2·s−1 photosynthetically active radiation (PAR). The healing process was complete after 6 d, and grafted seedlings were transferred into a greenhouse with 26 ± 2/20 ± 2 °C (day/night) temperature and 60% to 80% relative humidity. Non-grafted watermelon seedlings with the same seedling age were used as the control and nursed in the same greenhouse as the grafted ones. The water content of the substrate for both grafted and non-grafted seedlings was kept at 75% to 85% of the maximum water-holding capacity with a nutrient solution (18N–7.9P–14.9K–1.5Mg) daily. The electrical conductivity of the nutrient solution was 1.0 ms·cm−1.

Fifteen d after grafting, seedlings with two fully expanded true leaves and one small true leaf were transferred into growth chambers (Model HP-400 GC-C; Wuhan Ruihua Instrument & Equipment Co., Ltd., Wuhan, China) under dark conditions, 15 °C air temperature, and 85% to 95% relative humidity (Holcomb, 1994). Each treatment was repeated in three growth chambers, and each chamber held a grafted and a non-grafted seedling tray. Trays were relocated within and among chambers every 2 d to minimize environmental differences. Before storage, the water content of the substrate in each tray was adjusted to 75% of the maximum water-holding capacity using the weighting method (Chen et al., 2002). Seedlings were not watered during storage.

After 6 d of storage, seedlings were transplanted into the 24-cm diameter plastic pots filled with the same medium as in the seedling nursery and were transferred into an artificial climate chamber at 28/22 °C (day/night) temperature, 70% to 80% relative humidity, 14-h photoperiod, and 350 μmol·m−2·s−1 PAR. Plants were watered daily with half-strength Hoagland's solution.

Quantification of carbohydrates and chlorophyll.

Fresh leaves (0.5 g) were boiled in 10 mL water at 95 °C for 20 min. After centrifugation at 12,000 gn for 10 min, the residue was extracted three times using the same method. The water extract was used for the determination of soluble sugar levels with the anthrone-H2SO4 reagent (McCready et al., 1950). The insoluble fraction was hydrolyzed with 2 mL of 9.2 M HClO4 for the determination of starch levels according to McCready et al. (1950).

Chlorophyll was extracted from 0.2 g fresh leaves by 10 mL of 80% acetone for 48 h in darkness. The extract solution was measured using a spectrophotometer (Model Helios α; Thermo Electron Corp., Waltham, MA) at 663.2 and 646.8 nm. The chlorophyll content was calculated according to Lichtenthaler (1987).

To extract antioxidant enzymes, 0.5 g fresh leaves were ground in liquid N2 and homogenized with 5 mL of 0.1 M phosphate buffer (pH 7.8) containing 1 mm EDTA-Na2 and 1% (w/v) polyvinylpyrrolidone. After centrifugation at 12,000 gn at 4 °C for 20 min, the supernatant was used for the analysis of superoxide dismutase (SOD), catalase (CAT), and peroxidase (POD).

Peroxidase activity was determined using the guaiacol oxidation method (Chance and Maehly, 1955). Reaction mixture (3 mL) was mixed with 0.01 M phosphate buffer (pH 6.4), 8 mm guaiacol, 0.1 mL enzyme extract, and 2.75 mm H2O2. After H2O2 was added, the increase in absorbance was recorded at 470 nm every 10 s for the first 60 to 80 s with the spectrophotometer. One unit of POD activity was defined per gram of fresh leaves that caused a change of 0.01 in absorbance in 1 min (unit/g FW/min).

The level of lipid peroxidation in the leaves was measured in terms of malondialdehyde (MDA) content, which was determined by the thiobarbituric acid reaction (Heath and Packer, 1968). Fresh leaves (0.5 g) were ground in liquid N2 and homogenized with 5.0 mL of 10% (w/v) trichloroacetic acid. The homogenate was centrifuged at 10,000 gn at 4 °C for 10 min. The supernatant (2 mL) was mixed with 4 mL of 0.5% 2-thiobarbituric acid and heated at 95 °C for 30 min. After centrifugation at 10,000 gn for 10 min, the absorbance of the supernatant was measured at 532 and 600 nm. The concentration of MDA was calculated using the extinction coefficient of 155 mm/cm.

Net photosynthetic rate and gS of watermelon seedlings after transplanting were measured using a portable photosynthesis apparatus (Model Ciras-2; PP Systems, Hitchin, U.K.) with a quartz halogen light source at 500 μmol·m−2·s−1 PAR. Measurements of the photochemical efficiency and photosynthesis were taken from fully expanded leaves of five randomly selected seedlings of each treatment.

The experiment was considered to be a randomized block design. Data were analyzed using analysis of variance according to the general linear model procedure by SAS software (Version 8.1; SAS Institute Inc., Cary, NC). Differences between treatments were assessed by Fisher's protected least significance difference test at the 0.05 P level.

Changes of starch and soluble sugar contents during storage.

Because of the interruption of photosynthesis in the darkness, the carbohydrate reserves in the seedlings are important for growth during storage (Wilson et al., 1998). Nie et al. (2010) reported that grafted watermelon seedlings had better photosynthetic capacity as a result of their higher root absorption capacity. More photosynthate accumulated in the form of starch was found in the leaves of grafted watermelon seedling compared with non-grafted ones before storage (0 d) (Fig. 1A). However, there was no significant difference in soluble sugar content between grafted and non-grafted seedlings (Fig. 1B). After 2 d of storage, both starch and soluble sugar contents decreased. No significant difference in starch content between treatments was observed after 2 d, 4 d, and 6 d of storage, but the soluble sugar content of the grafted seedlings was significantly higher than that of non-grafted ones (Fig. 1). During storage, grafted seedlings degraded more starch than non-grafted seedlings not only for respiration and growth (Sato et al., 2004), but also for the maintenance of a higher level of soluble sugar. As an important osmoregulation substance in plants, soluble sugar may enhance tolerance against low temperature (Ma et al., 2009) and affect the survival ratio and photosynthetic recovery of seedlings after transplanting (Wilson et al., 1998).

Low temperature and darkness can trigger reactive oxygen species (ROS) accumulation in plant tissues (Kanazawa et al., 2000; Liu et al., 2003). Excess ROS should be scavenged in time or it will result in lipid peroxidation and the breakdown of membrane integrity. Antioxidant enzymes participate in scavenging the excess ROS in plants. SOD catalyzes the dismutation of O2– (superoxide) into O2 and H2O2 and is regarded as the first line of defense against ROS (Alscher et al., 2002). POD and CAT contribute to the decomposition of H2O2 (Toivonen and Sweeney, 1998). In this study, low-temperature storage in darkness dramatically affected the activities of antioxidant enzymes. SOD (Fig. 2A) and POD (Fig. 2B) activities of grafted seedlings were significantly higher than non-grafted ones after 4 d of storage, and a significant difference between treatments in CAT activity (Fig. 2C) was observed after 2 d of storage. During storage, grafted watermelon seedlings showed a higher antioxidant capacity, which suggests that they tolerate the storage conditions better than non-grafted ones. A recent study on cucumber (Cucumis sativus L.) reported grafting enhanced the gene expression of SOD and CAT under low temperature, which provided grafted cucumber seedlings better tolerance against low temperature stress (Gao et al., 2009).

As a product of membrane peroxidation, MDA content relates to the extent of damage by ROS and is a direct reflection of membrane integrity (Zhuang et al., 1995). McKay and Mason (1991) indicated that the membrane integrity of skita spruce [Picea sitchensis (Bong.) Carr.] and douglas fir [Pseudotsuga menziesii (Mirb.) Franco] seedlings was an indicator of survival after storage. MDA contents of both treatments increased during low-temperature storage in darkness (Fig. 2D). After 4 d and 6 d of storage, MDA content of grafted seedlings was significantly lower than non-grafted ones, which indicated less lipid peroxidation in grafted seedlings. The result was consistent with the activities of antioxidant enzymes (Fig. 2A–C).

In the absence of light, chlorophyll in seedlings and leafy vegetables is susceptible to degradation (Toivonen and Sweeney, 1998). Thus, etiolation is often observed during storage, which affects negatively seedling quality (Ning et al., 2006a). After 6 d of storage, a significant difference in chlorophyll content was observed between treatments (Fig. 3A). ROS is regarded as an important factor to accelerate chlorophyll loss (Zhuang et al., 1995). Rapid degradation of chlorophyll of non-grafted watermelon seedlings might be the result of their weak ROS scavenging activity.

Fv/Fm is the maximum photochemical efficiency of photosystem II (PSII) and represents the function of PSII. Because PSII is sensitive to environmental stresses such as low temperature and darkness, Fv/Fm is used for evaluating the postharvest quality of leafy vegetables and the transplanting survival of tree seedlings after removal from storage (Ferrante and Maggiore, 2007; Perks et al., 2004). As shown in Figure 3B, low-temperature storage in darkness reduced the Fv/Fm of watermelon seedlings, and a significant difference in Fv/Fm between treatments was observed after 4 d of storage, which indicated the damage extent to PSII in grafted seedlings was less than that of non-grafted ones. This suggests that the grafted watermelon seedlings have a higher tolerance to low temperature and darkness.

Comparisons of starch (A) and soluble sugar contents (B) of non-grafted watermelon (Citrullus lanatus ‘Zaojia 84-24’) seedlings and grafted watermelon seedlings with pumpkin (Cucurbita moschata ‘Zhuangshi’) rootstocks during 15 °C storage in darkness. Asterisk indicates significant difference between treatments on a given day (P = 0.05).

Comparisons of chlorophyll contents (A) and leaf photochemical efficiency (B) of non-grafted watermelon (Citrullus lanatus ‘Zaojia 84-24’) seedlings and grafted watermelon seedlings with pumpkin (Cucurbita moschata ‘Zhuangshi’) rootstocks during 15 °C storage in darkness. Asterisk indicates significant difference between treatments on a given day (P = 0.05).

Comparisons of net photosynthetic rate (A) and stomatal conductance (gS) (B) of non-grafted watermelon (Citrullus lanatus ‘Zaojia 84-24’) seedlings and grafted watermelon seedlings with pumpkin (Cucurbita moschata ‘Zhuangshi’) rootstocks after transplanting. Different letters above the columns indicate significant differences between treatments on a given day (P = 0.05). 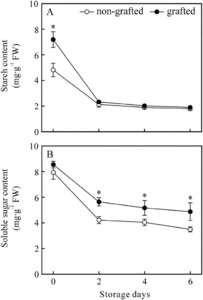 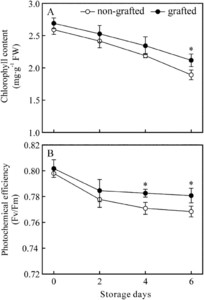 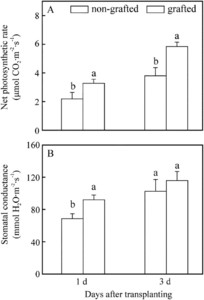