Cultivated caladiums (Caladium ×hortulanum Birdsey) are valued for their bright colorful leaves (Evans et al., 1992). They can be broadly classified into three groups based on leaf shape: fancy, lance, and strap (Deng and Harbaugh, 2006; Wilfret, 1986). Fancy-leaved caladiums have heart-shaped leaves with three main veins, petiole attachment peltate, and they have two large basal lobes. Strap-leaved caladiums have narrow, linear leaves with one main vein and no obvious basal lobes. Lance leaves are intermediate between fancy and strap types with leaf blades that are broad sagittate to cordate–lanceolate. Basal lobes on different lance-leaved cultivars range from obvious to barely visible.

The majority (greater than 95%) of caladium tubers used in the United States and abroad are produced in Florida. Florida growers supply as many as 50 to 70 million caladium tubers to greenhouse growers, nurseries, and homeowners throughout the United States and Canada and to some 40 countries in Europe and Asia. The majority of caladium cultivars in commercial production are the fancy-leaved type (Bell et al., 1998; Deng et al., 2005). However, during the past two or three decades, the demand for lance-leaved cultivars has increased steadily. For example, Florida growers planted greater than 50% more acres with lance-leaved cultivars in 2003 than in 1998 (Bell et al., 1998; Deng et al., 2005). Lance-leaved cultivars are expected to gain even greater popularity in the future.

UF 44-4 is an attractive lance-leaved cultivar with a novel combination of leaf characteristics (bright red color, slightly undulate, and rounded leaf shape) (Figs. 1 and 2). In replicated field and greenhouse trials, it was comparable or superior to ‘Florida Red Ruffles’ and ‘Florida Sweetheart’ (the most popular red lance-leaved commercial cultivar and the most popular lance-leaved cultivar in all colors, respectively) in tuber yield potential, pot plant quality, and landscape performance. UF 44-4 is well suited for producing pot plants and hanging baskets, and de-eyeing is not required for forcing in small- or medium-sized containers (11.4 to 15.3 cm).

UF 44-4 was selected in 2001 from a population of progeny resulting from selfing S79-206, a caladium selection from cross-pollinating ‘Candidum Junior’ and ‘Red Frill’, two unpatented commercial cultivars. ‘Candidum Junior’ is fancy-leaved, whereas ‘Red Frill’ is lance-leaved. They were selected as parents for their excellent growth habit as pot or landscape plants.

UF 44-4 was evaluated for tuber production and plant performance at the Gulf Coast Research and Education Center in Wimauma, FL, in 2005 and 2006. The soil was an EauGallie fine sand with ≈1% organic matter and a pH of 6.2. Plants were grown in a plastic-mulched raised-bed system maintaining a constant water table with seep irrigation (Geraldson et al., 1965). In 2005, ground beds were fumigated on 25 Feb. (6 weeks before planting) with a mixture of 67% methyl bromide and 33% chloropicrin (by volume) at the rate of 392 kg·ha−1, and in 2006, the beds were fumigated on 10 Mar., 10 d before planting, with the same fumigant mixture but at the half rate, 196 kg·ha−1. The beds were 91 cm wide and 20 cm high with 2.54-cm caladium seed pieces (tuber pieces) planted 15 cm apart in three rows. Osmocote 18N-2.6P-10K 8-9 month controlled-release fertilizer (Scotts Co., Marysville, OH) was applied to the bed surface when shoot tips were emerging from the soil with nitrogen at 336 kg·ha−1.

Weight, production index, marketable number, and grade distribution of caladium tubers produced in 2005 and 2006 from 30 2.54-cm tuber propagules planted in a 1.2-m2 plot.z 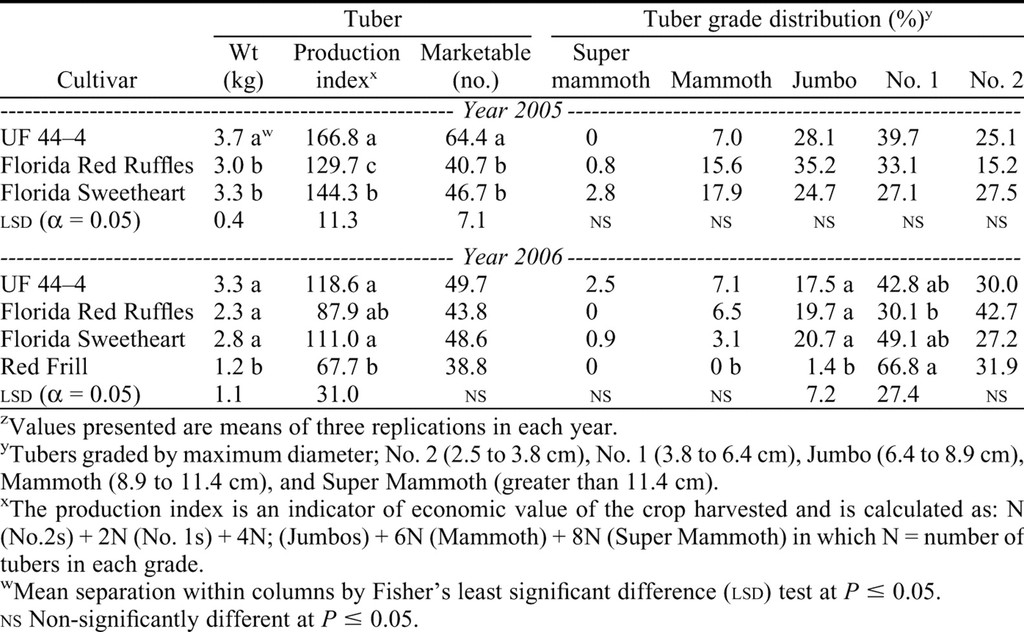 In tuber grade distribution, the majority (55% or more) of tubers of UF 44-4 were in the categories of No. 1, Jumbo, or Mammoth, which was similar to the size distribution of ‘Florida Red Ruffles’ and ‘Florida Sweetheart’. UF 44-4 produced more large tubers (Mammoth and Jumbo) than ‘Red Frill’, which had the majority (greater than 95%) of tubers in the No. 1 and No. 2 categories.

Landscape performance of UF 44-4 was evaluated on the same plots used for evaluating tuber production. A scale of 1 to 5 was used with 1 being very poor (few leaves and lack of vigor) and 5 being excellent (full plants, numerous leaves, and bright color display). Leaf sunburn tolerance also was evaluated on a scale of 1 to 5 with 1 being very susceptible to sunburns (leaves having numerous sun-damaged areas or holes) and 5 being resistant to sunburns (no visible sun-damaged areas). A total of eight evaluations was conducted for plant performance and sunburn tolerance over three growing seasons in June, July, and Aug. 2005, Aug. and Sept. 2006, and July, Aug., and Sept. 2007. Approximately 4 months after planting, plant height, number of leaves, and leaf size were measured on three randomly chosen plants in each plot.

Plant characteristics of UF 44-4 and three commercial cultivars ≈4 months from planting 2.54-cm tuber propagules in ground beds in full sun in 2005 and 2006.z

Plant performance and sun burn tolerance of UF 44-4 and three commercial cultivars when planted in ground beds in full sun in 2005, 2006, and 2007.z

The suitability of UF 44-4 for pot plant production was evaluated by forcing tubers in 11.4-cm containers. No. 1 tubers were planted either intact or de-eyed in a peat/vermiculite mix (VerGro Container Mix A; Verlite, Tampa, FL) on 26 Mar. 2007. The study was conducted in a greenhouse with 45% light exclusion during the summer in Wimauma, FL. Average daily temperatures ranged from a low of 16 °C at night to 29 °C during the day during the experiment. Potted plants were arranged on metal benches in the greenhouse in a randomized complete block design with 10 replications. Plant height, number of leaves, and foliar characteristics were recorded 8 weeks after planting.

Plant performance for caladium cultivars grown from No. 1 tubers in 11.4-cm containers in a 45% shaded glasshouse in Wimauma, FL, 2007.z

UF 44-4 is a new lance-leaved cultivar with a novel combination of leaf color and shape (dwarf red with slightly undulated and rounded leaves). Plants of UF 44-4 produce a superb number of bright red leaves in sun or shade and have performed well in replicated container and field trials. UF 44-4 is suitable for a range of container sizes for pot plant production and tubers do not require de-eyeing.

Although extensive research and evaluations of these cultivars have been performed on small acreages, growers are encouraged to plant only limited quantities of UF 44-4 until they have gained experience in producing this cultivar. Standard postharvest treatment of tubers is recommended (Harbaugh and Tjia, 1985) and pre-plant hot water treatment of tubers (Rhodes, 1964) is encouraged.

UF 44-4 plants produced by forcing tubers in 11.4-cm square pots. The plant on the left side was forced from one intact No.1 tuber (3.6 to 6.4 cm in diameter), whereas the plant on the right side from one de-eyed No. 1 tuber. Photograph was taken 8 weeks after the tuber was planted in the pot. 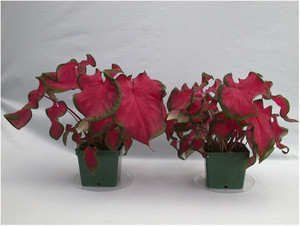 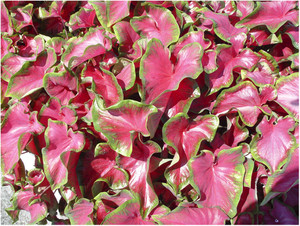